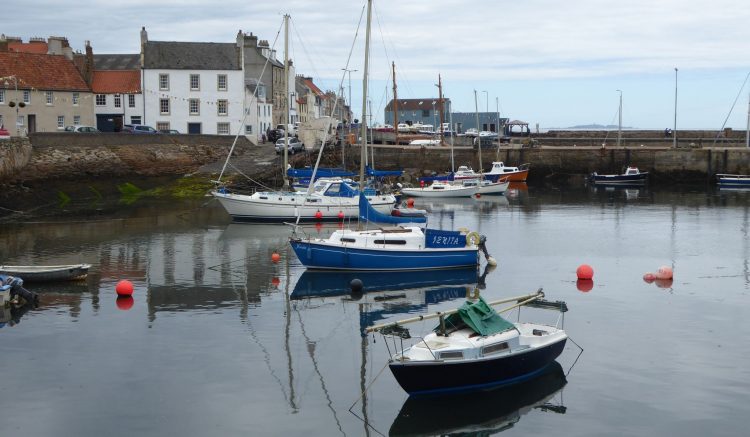 When we were staying at Knockhill CL last year we spent a very enjoyable afternoon walking the Fife Coast Peninsula path between St Monans and Crail.  It was a straightforward walk with plenty of interesting things to see, so we decide to repeat part of it again today.

We park at St Monans in the car park alongside the church and pick up the coastal path heading east into the village. 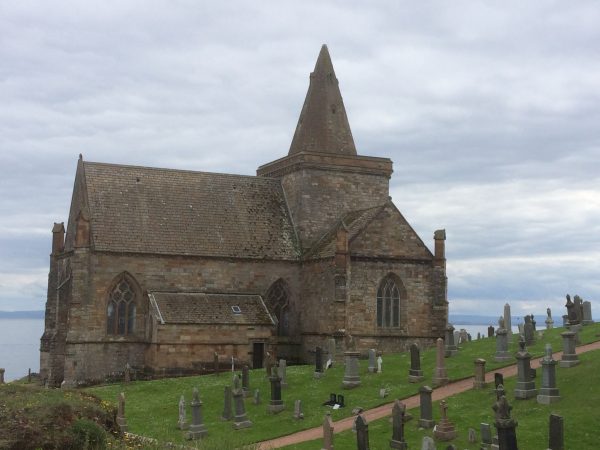 After climbing some steps we get a cracking view of St Monans harbour with it’s three piers.  There is a long tradition of fishing here the original pier was built in 1596, the eastern pier was added in 1865 and finally the western pier in 1900. 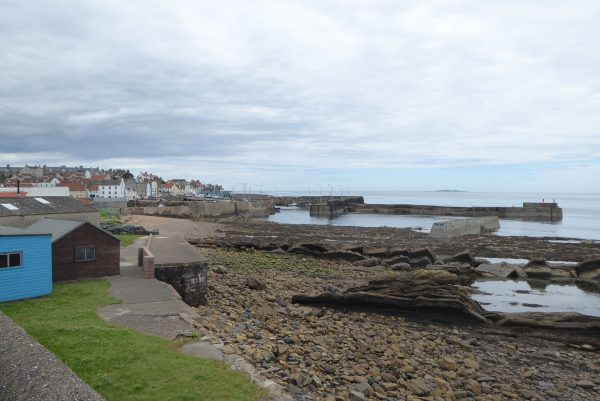 At one time more than a hundred fishing boats operated from here, today there are far fewer, but it remains an active fishing harbour. 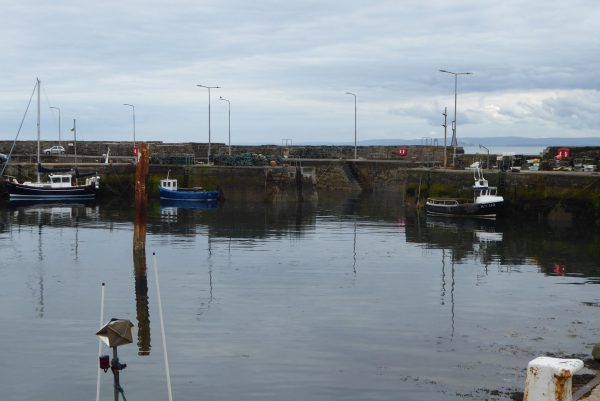 As well as fishing the local economy was boosted for 200 years by shipbuilding.  Alongside the harbour there used to be the shipyard of JN Miller & Sons, the shipbuilders closed in 1992 and there is now little evidence of its existence.

Walking down towards the harbour we pass the Welly Boot Garden.  For a number of years the local community have used donated welly boots as planters.  It creates an interesting scene, there do not seem to be as many here as last year, I hope it’s just timing rather than waning interest. 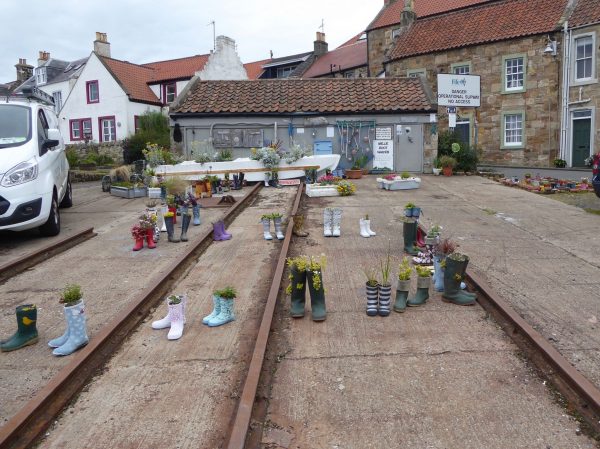 Leaving the village we pass the windmill at the old salt works, I wrote about the history of the salt works last year so will not go into detail, suffice to say that the salt pans here were worked from the 1770’s until the 1830’s. 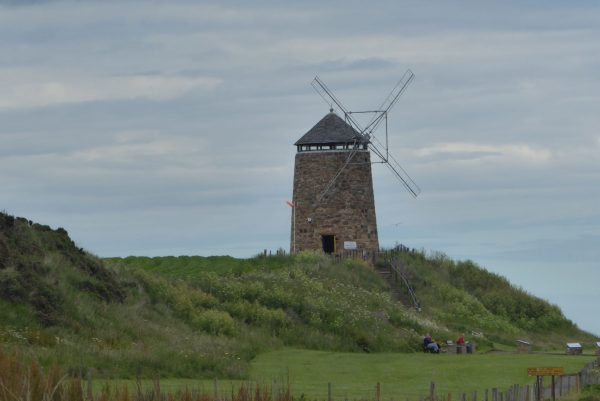 The path now runs along the edge of the shoreline and with the tide out there are plenty of seabirds foraging around the rock pools. 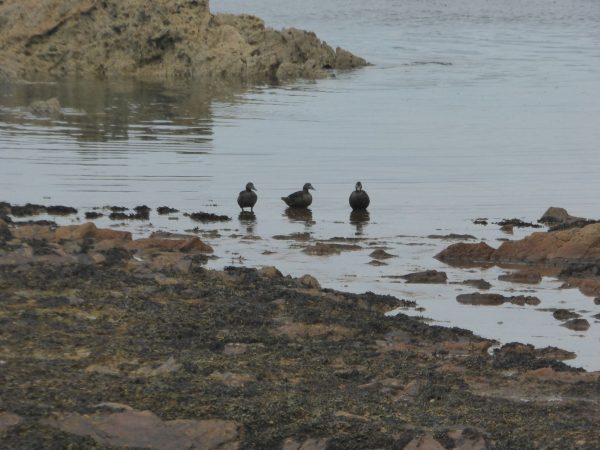 The path climbs as we near Pittenweem providing a great view of this attractive fishing village. 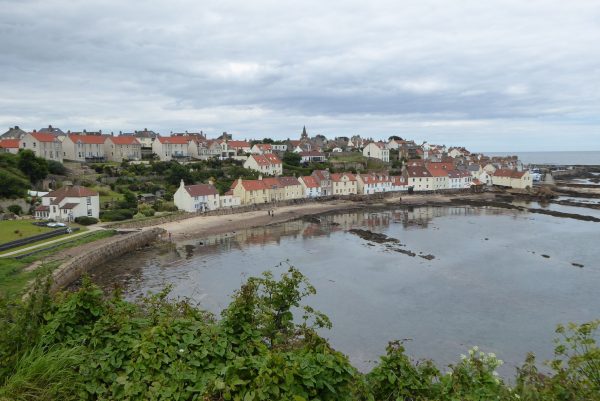 As we head down the hill Lynnie’s pace quickens, she has obviously remembered that there is an ice cream shop in the village.  But first we have to pass the row of attractive cottages on the waters edge. 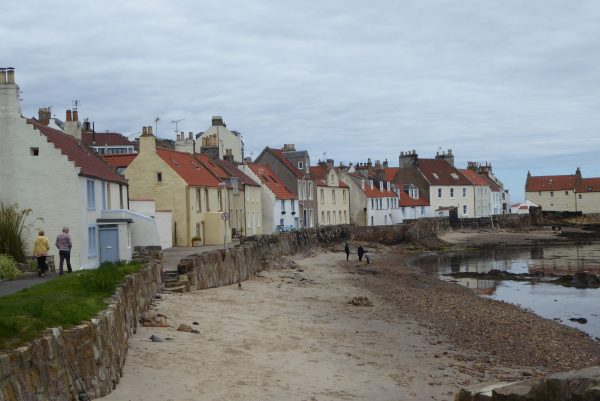 As we approach the harbour Lynnie darts across the road and into the ice cream shop. 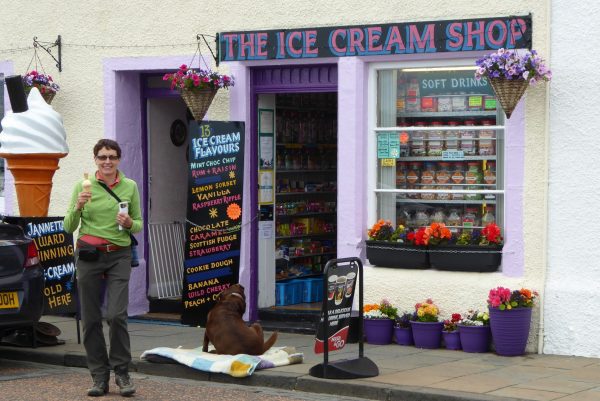 We wander around the harbour and pass the fine Gyles House, the blue plaque on the wall states “Built in 1626 for Captain James Cook.  Cook married a Horsburgh and the house stayed in the Horsburgh family for 300 years, Sadly the claim that it was Cook’s ship that carried Charles II to France after his defeat at the 1651 Battle of Worcester is a 19th century hoax.  John Henry Lorimer, portrait painter, restored the house in 1930, hence the initials JHL and numerals on the gate.  Hew Lorimer, sculptor, lived here in the 1930’s and 1940’s.” 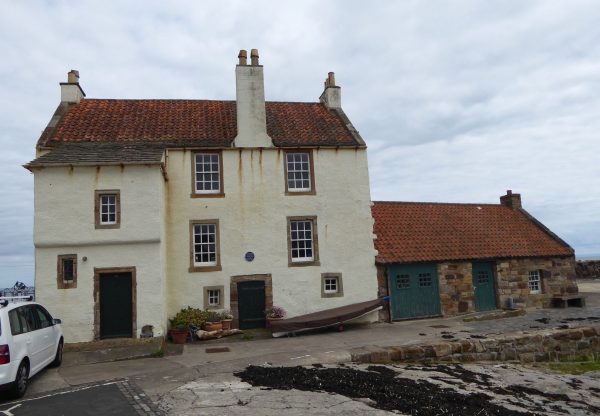 Pittenweem harbour is mainly used by industrial fishing boats and there appear to be no moorings here for pleasure boats. 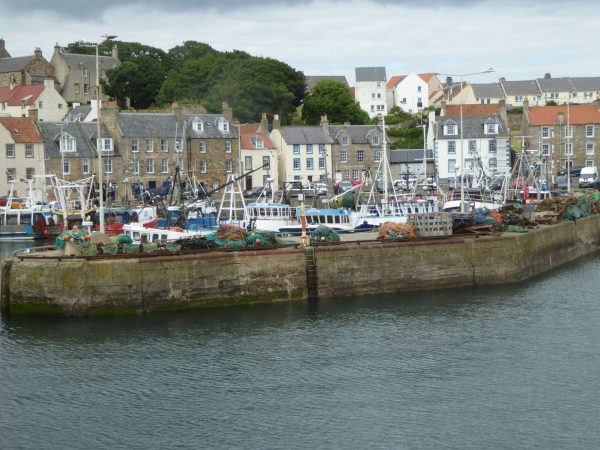 We walk along the harbour wall; the old stones used for mooring are evidence of the historic past. 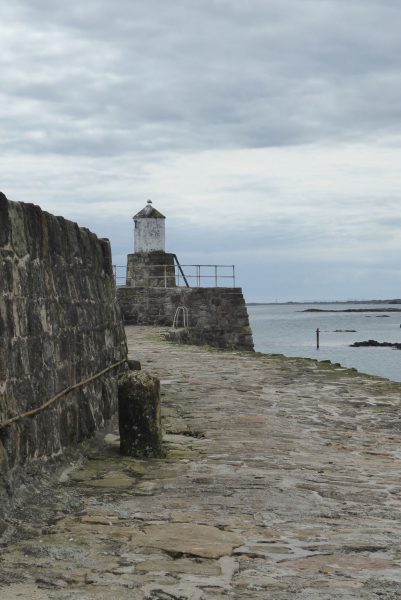 Soon after leaving Pittenweem we walk around the edge of Anstruther Golf Course, the tide is out and my eyes are peeled looking for lost golf balls on the rocks.  I have a fortunate knack of locating lost balls and today a Srixon AD333, worthy of a place in my golf bag, sits nestled under two rocks.

We pass the Golf Club and then walk along a couple of streets to reach Anstruther Wester harbour.  Our visit here last year coincided with the annual Harbour Festival and the place was packed.  Today there are far fewer people about which gives us a better chance to wander around.

In contrast to Pittenweem the harbour here is full of pleasure boats, there are a few trawlers and the old herring drifter the Reaper is moored here.  I wrote about the Reaper last year.  Since then, in August 2016, whilst moored at the Johnshaven Fish Festival she was blown over in high winds requiring a major salvage operation to rescue her. 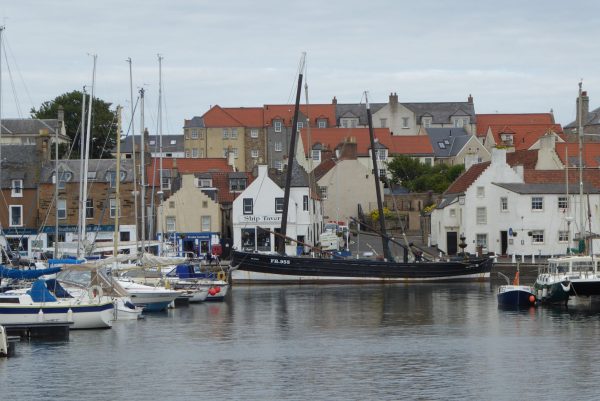 We walk towards Easter Anstruther, it appears that every house along the way has a blue plaque, all giving details of the old sea captains that used to live in them.

We reach Cellardyke Harbour, which the information board states is also known locally as Skinfast Haven.  Apparently Dutch dyke builders assisted in the creating of the original harbour in 1452.  In 1829 the harbour was extended and then again in 1854, further work to reduce the entrance width to about 25 feet was carried out later. 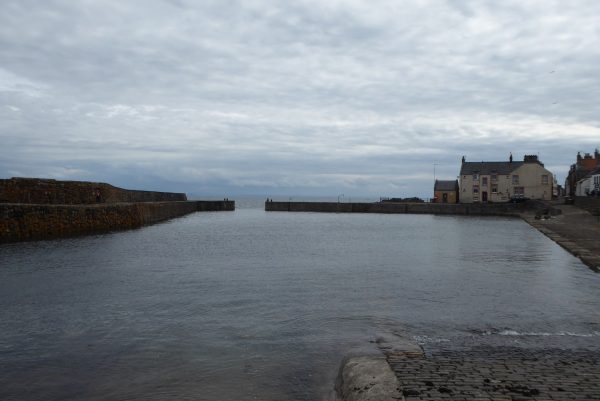 Last year we continued along the coast to Crail, but today we are turning back here.  We want to spend some time in Wester Anstruther, including a visit to the well-reviewed Minick Butchers.

With our evening meal safely tucked into the rucksack we wander around the corner to look at the area devoted to Thomas Chalmers.  I had not previously heard of Chalmers but in some circles he is renowned.  Born in Anstruther in 1780 he was admitted to St Andrews University aged eleven to study mathematics.  In 1799 he became a preacher and in 1803 became the minister at Kilmany where he attracted a large following, including Willian Wilberforce (who led the abolition of the Slave Trade). 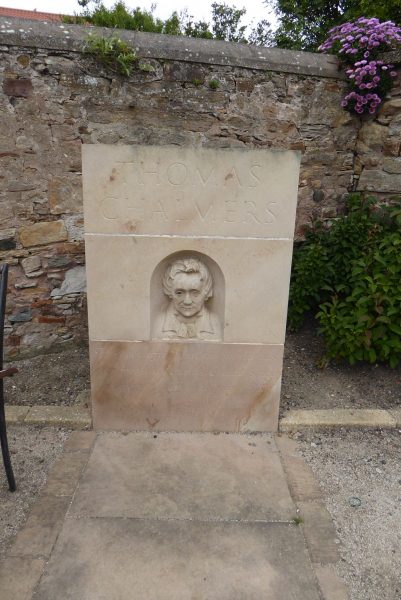 In 1819 he moved to Glasgow and established several schools and more than forty Sabbath schools, (providing education for working class children) teaching more than 1000 children.  Then in 1843, because of injustice he led four hundred ministers away from the established church to form the Free Church of Scotland.  As a consequence the established church evicted all the ministers and their families overnight from their manses (I am not so sure this showed much Christian charity), Chalmers raised funds to rehouse all the ministers and their families and relieve them of poverty.

He went on to oversee the building of churches and schools all over Scotland, including New College in Edinburgh, where theology is still taught.  He was obviously a remarkable man seeking to address social injustice, he died in 1847 aged sixty-seven.

Resuming our walk we head out of Wester Anstruther back towards Pittenweem. Passing the Golf Club we see children being taught golfing skills at an evening coaching session. 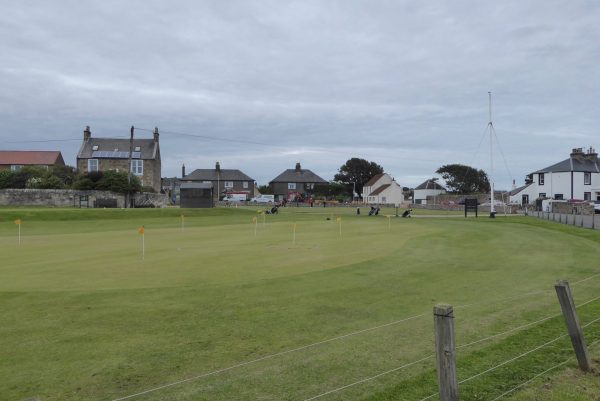 As we pass Pittenweem harbour a trawler is heading out to seek a catch. 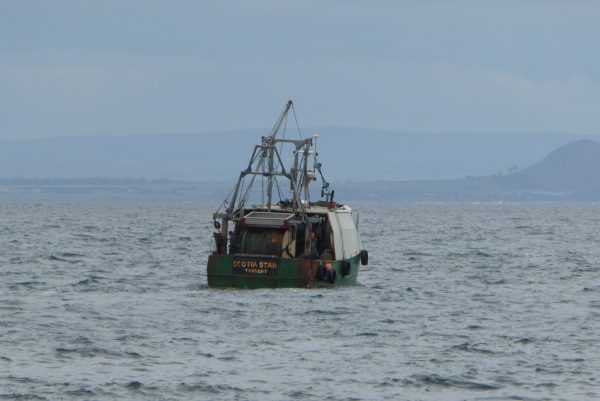 By now the ice cream shop has closed so there is no chance of Lynnie tasting another of their many flavours, so we make good speed back along the coastline to St Monans.

Back in St Monans we decide to carry on along the coast a bit further to look at the ruins of Newark Castle. 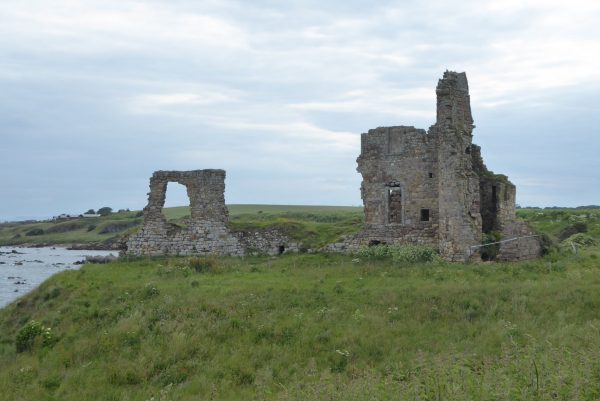 It is thought that a castle has stood on this site since the 13th century; King Alexander III (1241-1286) spent his childhood here with his half-sister and her husband Sir Alan Durward.

In the 15th century the Sandilands family owned it and they undertook major work before ownership passed to David Leslie in 1649.  He was a General in the Scottish Covenanter Army and was captured by Cromwell’s men at the Battle of Worcester in 1651.  He was then locked in the Tower of London and released in 1660 following the restoration of Charles II.  Leslie was made 1st Baron of Newark and lived at Newark Castle until his death in 1682.

The castle is in a poor state of repair; apparently the coastline has eroded about thirty feet in the last one hundred and twenty years, which is now putting the ruins at risk.

On the way back to St Monans we stop to look at the Doocot close to the castle ruins.  This is precariously placed and looks as if it too could soon be lost over the cliff. 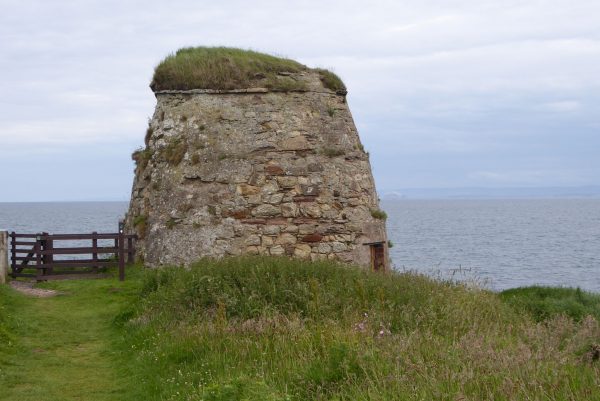 Today’s walk has covered close to ten miles.  It has been interesting to re-visit this bit of coastline and see things that we missed last year.  I am sure there is a lot more to see along this glorious stretch of coast, so we will have to return on another trip.

To view this route from OS Maps Click Here 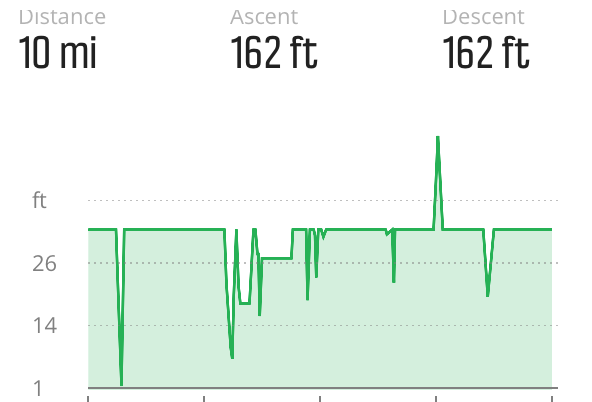