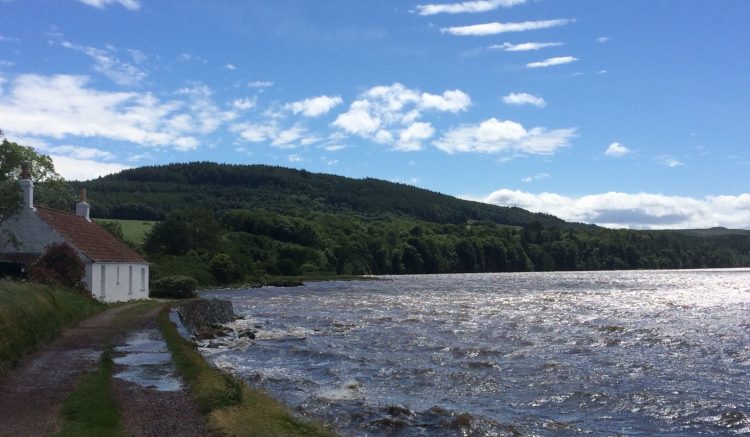 Last year when in this area we explored a lot of the south coast of the Fife Peninsula, so today we feel it is time to wander along part of the Tay Estuary on the north side of the peninsula.  The starting place for our walk is the car park on Bay Road at the edge of Wormit.

Leaving the small car park on the edge of the estuary we head east, stopping to look back at the Tay Railway Bridge.  This is the site of Britain’s worst ever railway disaster.  The first Tay Bridge was completed in February 1878 and the man responsible for the design, construction and maintenance, Thomas Bouch, received a knighthood for his efforts.

On the 28th December 1879 a train crossing the bridge in gale force winds was lost as the bridge collapsed. The reason for the collapse is still debated, but beyond dispute is that all the seventy-five unfortunate people on board the train died.  The walk soon takes us past the memorial to those lost. 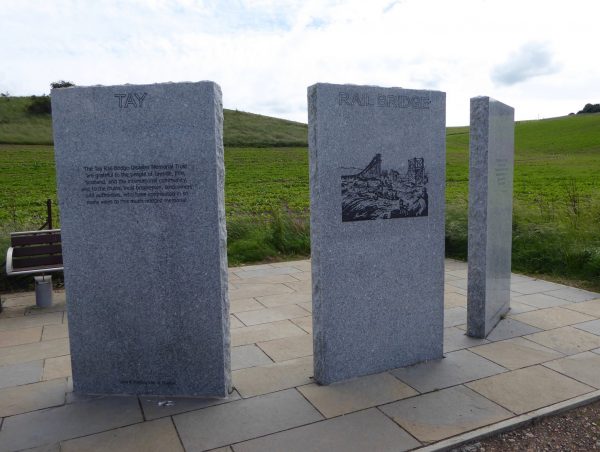 The new rail bridge, which is over two miles long, was completed in 1887 and is still in service. When built it had the largest span in the world.  Apparently, there are over three million rivets in the bridge, ten million bricks, plus thousands of tons of concrete, iron and steel, it was obviously a hazardous working environment and fourteen men lost their lives during the construction, mainly by drowning. 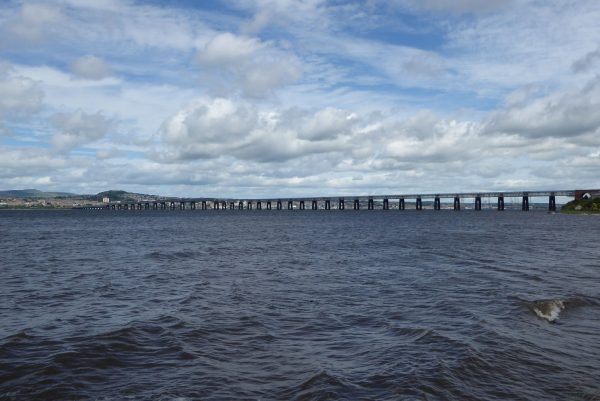 Our walk continues along the banks of the Tay and on reaching a wooden seal sculpture, which Dexter finds fascinating, we start to walk uphill on a path signed for Balmerino. 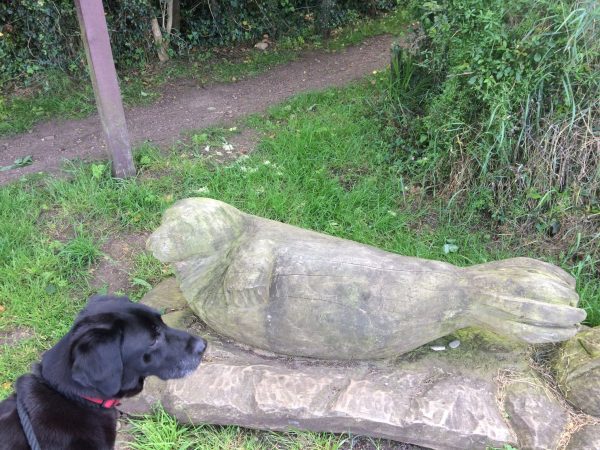 At first there are hedges on both sides of the path and then fields to our left and the River Tay on our right.  We pass another seal sculpture and continue on. 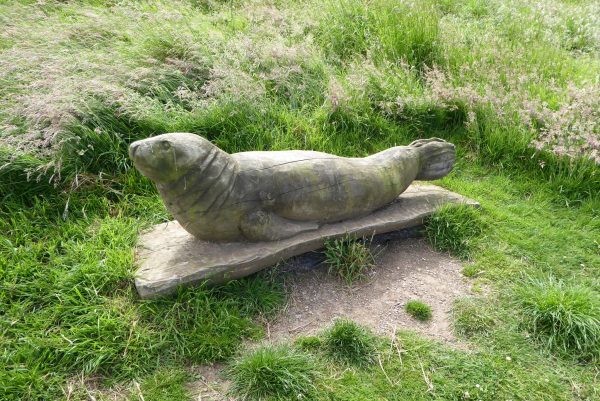 There are occasional paths off to the left as we enter woodland, but we continue on the main path with the Tay on our right.  Eventually we leave the wooded area and arrive at a group of cottages with a slipway to the river at Nether Kirkton.  This is a lovely, peaceful spot, but it was once busy with industry.  There used to be a boiling house here that preserved salmon.  As recently as the 1950’s (if like me you were born in the 1950’s, it still feels recent) a local business was in partnership with Young’s Seafood.  There is no sign of this now. 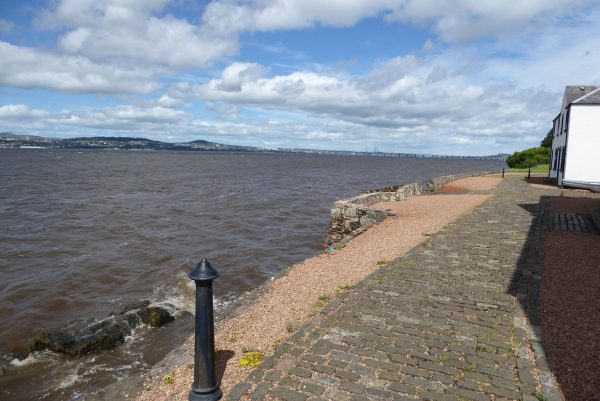 Around the corner we hope to see the Deil’s Stane (or Samson’s Stone as it is marked on my OS map) there are a couple of legends associated with this stone, but I prefer the likelihood of it being a glacial deposit.  Unfortunately the tide is high, obscuring the stone, and causing spray which gives us all a bit of a soaking.

We are now entering Balmerino, there used to be a pier here where lime was transported from the Fife hills to Dundee, then later it was used when transporting wheat and barley around to the Forth. 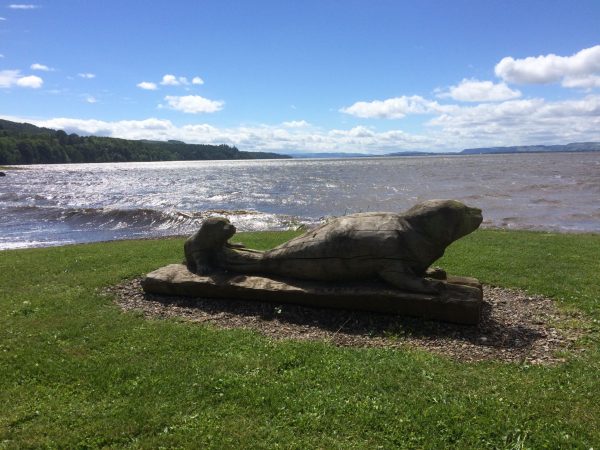 We pass the old mill, now converted to a home, originally wheat, oats and barley were ground here. 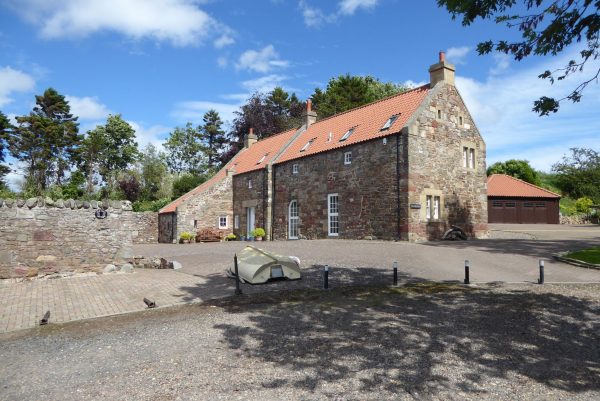 Further up the hill is the Old Inn, once a public house but another property converted into a private home.  There was a time when Sunday drinking was only allowed if you were a traveller, this pub did a roaring trade then with people hopping on a pleasure boat from Dundee for an afternoon on the pop. 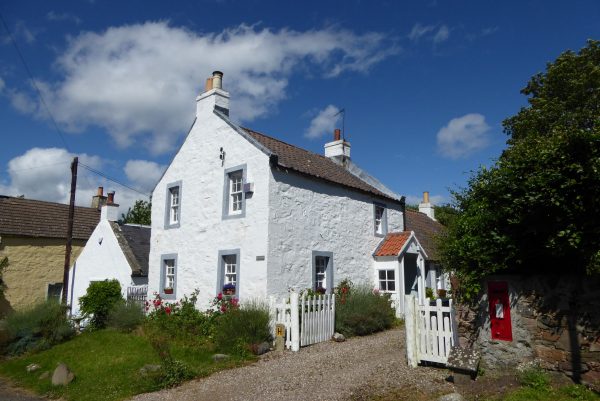 Along the road is Balmerino Abbey, or St Edward’s Abbey.  This was a Cistercian monastery founded in 1229 by Monks from Melrose Abbey with the patronage of Queen Ermengarde de Beaumont and her son King Alexander II of Scotland. 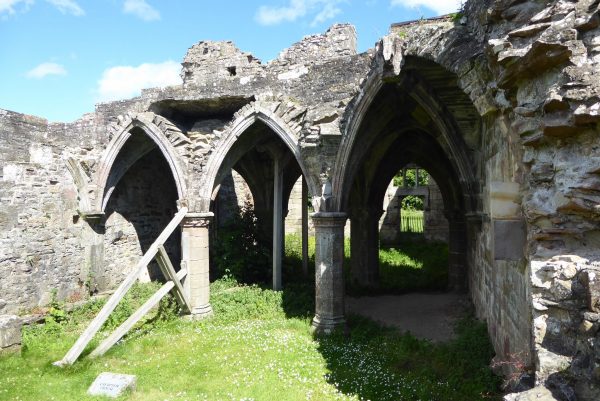 Queen Ermengarde was buried here in 1233 and legend has it that she planted a Spanish Chestnut Tree here in 1229, however tests on the tree in 1988 suggested it was only three hundred and fifty to four hundred years old.  Still an impressive age and it is an impressive tree. 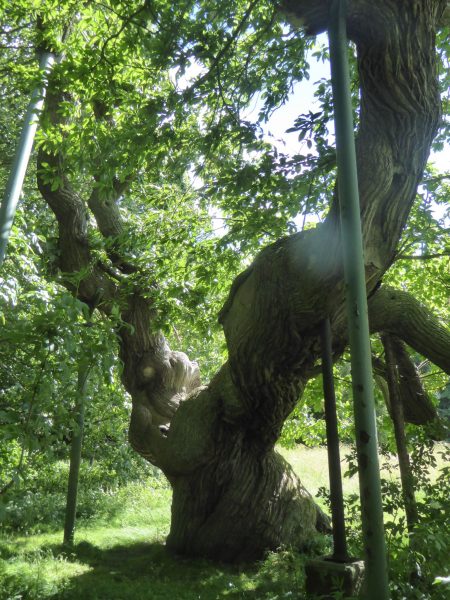 The Abbey was attacked during the reformation and by 1603 had become the home of James Elphinstone , 1st Lord Balmerino and his family.

This is an interesting spot to wander around on a warm afternoon.  I take full advantage of the bench to take a rest whilst Lynnie explores more thoroughly. 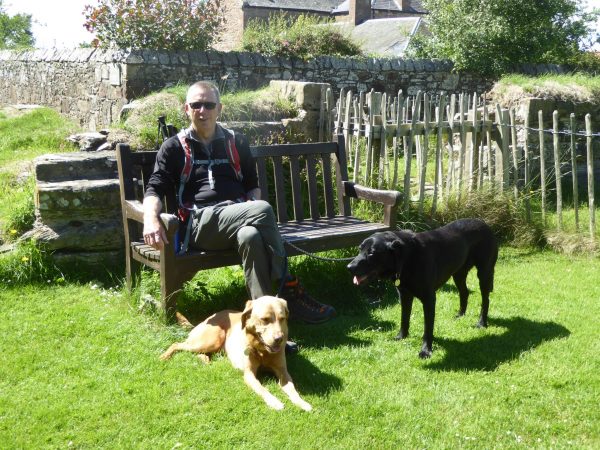 Our walk resumes by heading back down the road and then turning right just after the Old Inn, we cross a bridge and then pass the cemetery on the edge of Kirkton.  At a junction we turn left and walk around this small village.  It is recorded that it 1838 one hundred and fifty people were employed in flax weaving in this village.  The flax was transported across the Tay from Dundee and many of the cottages had weaving sheds attached to them.

At a telephone box by a crossroads we turn left and then immediately right on a track, passing bungalows until we reach a path that climbs straight ahead between hedges.

We pass a bench that at one time must have had fine views, but now faces high bushes, and continue on the clear track through woodland. The track then reaches an arable field and we follow the clear path through corn to Kilburns Farm.  The path goes around the farm and joins a track heading for woodland. 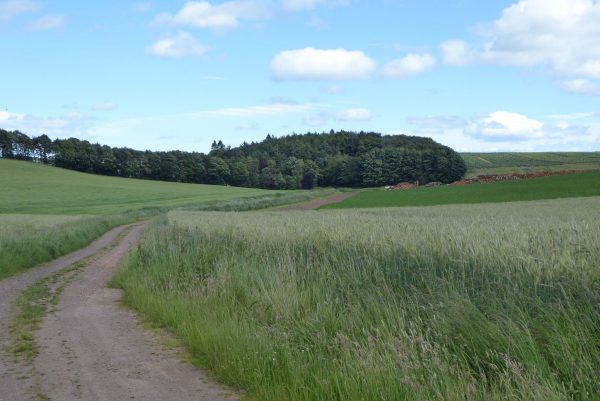 After passing through a small plantation we pass some bungalows on our left and then agricultural workers picking crops in the fields.  This looks to be very hard, backbreaking work the chaps appear to be talking in an Eastern European language.

I was recently listening to a programme on Radio 4 when a major vegetable farmer was saying that he feared for the future of his business when, as a result of Brexit, he would no longer be able to employ workers from Eastern Europe.  His assessment was that food prices would have to rise, in the unlikely event that he found UK nationals prepared to do the work, or he would have to close the business.  I suppose that’s what was meant when the leave campaigners said they wanted to put the “great” back into Great Britain!

We continue our walk towards Peacehill Farm, which appears to be a major producer of vegetables, deep in discussion about the cliff that as a Country we have just walked off.  I still wake hoping that it has been a terrible dream, but increasingly realise it has not.  But at least our NHS is safe as the current Cabinet Ministers, Michael Gove and Boris Johnson, said there would be an extra £350m per week for the NHS if the country left the EU.  They would not have deceived people into voting for their campaign if that was not true, would they?

Deep in conversation we miss the footpath back to Wormit, and by the time we realise we are well down the farm drive and almost at a minor road.  On reaching the road we turn left and after crossing the railway line and walking uphill we turn left again joining the pavement to walk besides the B946 back into Wormit.

There are some very interesting houses up to our right which all seem to have turrets.  The town grew up when the rail bridge opened and it became popular with people moving out from Dundee. 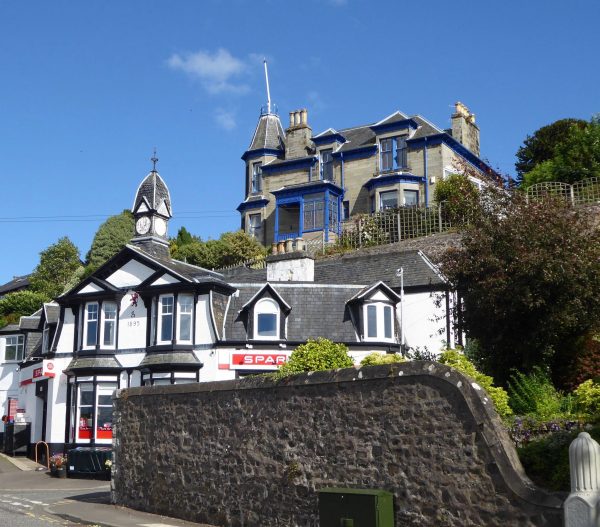 It is a warm afternoon as we walk through the town, Lynnie realises we have passed our turning back to the car, but I persuade her we should carry on to the pier and harbour at Woodhaven. 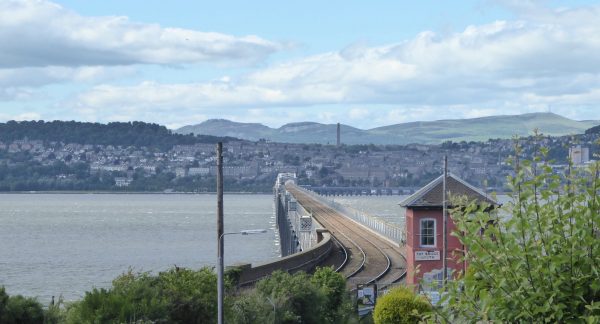 It was at the end of this pier that the HMS Mars was moored for sixty years.  The ship, a two-decked 80-gun war ship, was launched on 1 July 1848.  She served in the Crimean War and then had screw propulsion fitted in 1885.  In 1869 she was located on the Tay.

Over the next sixty years more than 6,500 homeless and destitute boys from Dundee, Glasgow and Edinburgh were put on the ship to learn new skills and keep away from trouble.  Putting the boys on the ship was seen as an alternative for jailing them for crimes they committed.  At the time, late 19th century, life in Dundee was hard, it was a town of poverty and disease.

It was a tough existence on the ship and boys tried to escape, some losing their lives in the process.  Apparently it was not uncommon for those found guilty of a misdemeanour, like trying to escape, theft, smoking or disobedience, to be strapped over a gym horse and beaten with a short leather strap (a tawse).

There is a memorial by the side of the harbour to the “Old Boys” of Mars who lost their lives in World War I, unfortunately most of these chaps were young men who found their training on Mars became preparation for the horrors of war. 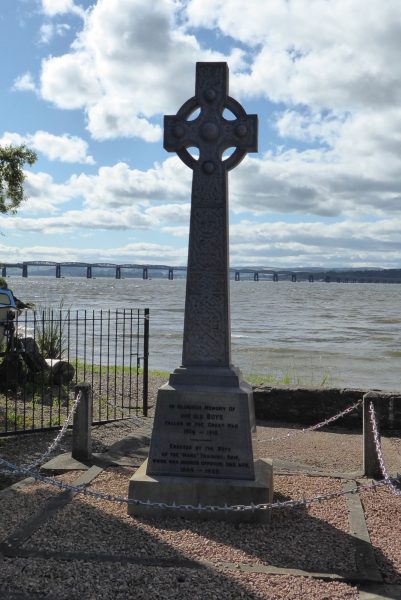 We sit for a while, in reflective mood, on a bench on the harbour wall looking over the Tay to the road bridge. 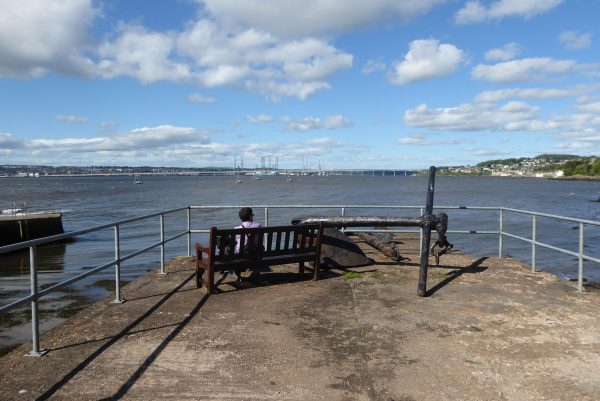 Walking back along the road and then taking a right turn down Bay Road we return to the car.  It has been a pleasant walk of just over eight and a half miles, and yet again we have learnt something new. 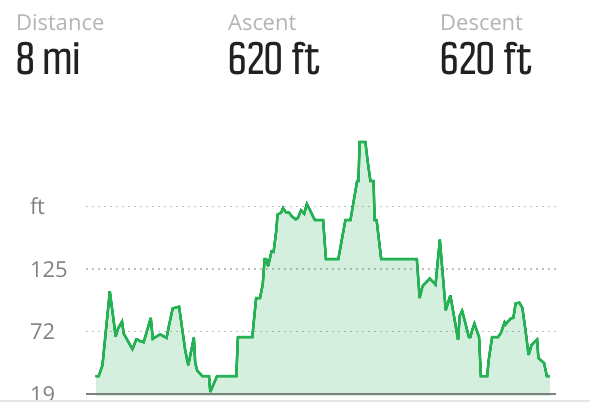