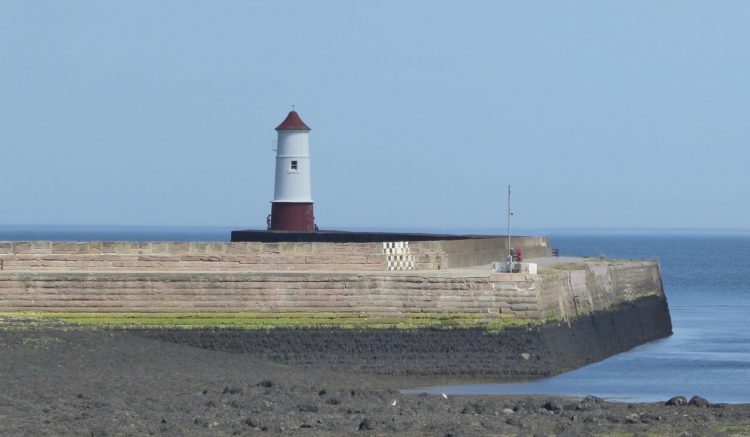 Today we are off to explore Berwick-upon-Tweed. When we last visited the town in July 2014 it was a cold miserable day, this time around it is an absolute corker.  We have heard that the temperature has been unbearable back at home, but here it is pleasantly warm without being too hot.

We drive into Berwick, being a Sunday there are no parking restrictions, so we park by the side of the road by the War memorial in Castlegate.

Walking down the road towards the town, we turn right on reaching the town walls and head towards the river.  We are just on an amble around the town going where the mood takes us.  As we approach the river we spot a fine statue.  This is of Annie, Lady Jerningham (1850-1902).  Apparently her first husband, Charles Mather, left her a small fortune.  She then married the diplomat Sir Hubert Jerningham. 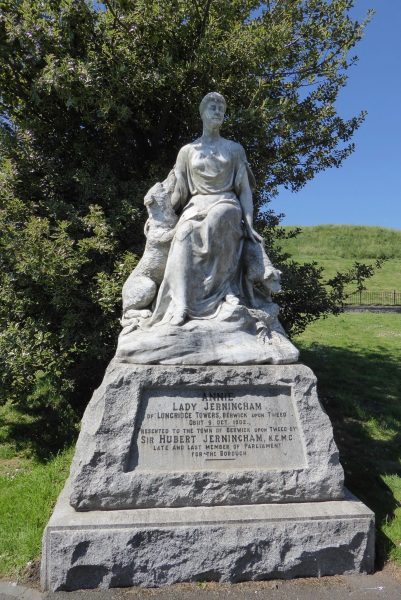 Sir Hubert was posted to Trinidad and Tobago, and it was whilst living there that Lady Annie began to suffer ill health. She returned to Britain but never fully recovered and died on 9th October 1902. The statue was erected in 1908 at a location on Bankshill, Marygate where it could be seen from her home Longridge Towers a few miles to the southwest.  The statue is showing signs of wear; apparently up until the 1970’s it was covered in straw during the winter for protection. 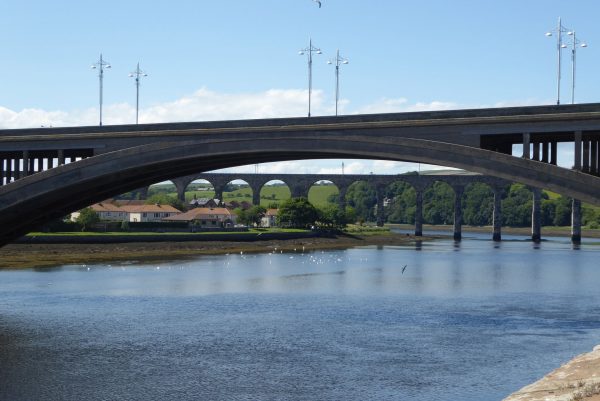 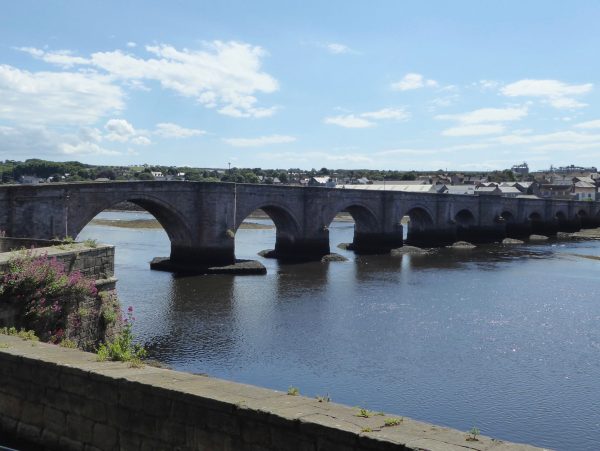 We walk along the banks of the Tweed passing the old Custom House. 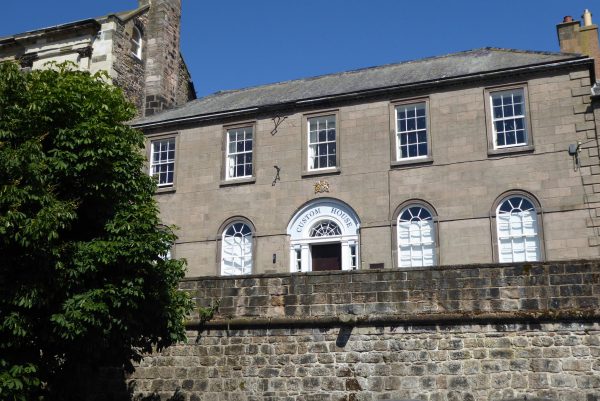 Our walk continues on the Ramparts that are a key feature of the town.  Berwick is the northern most town in England as is just a couple of miles from the Scottish border.  Over the years it has been part of England and Scotland, often changing hands after battles.  As recently as 2008 members of the Scottish National Party sought to have it become Scottish again.  As those of you who like football trivia will know, the town’s football team Berwick Rangers play in the Scottish League.

We soon leave the ramparts by taking a slope on the left that leads to a bridge under the ramparts to join Pier Road. 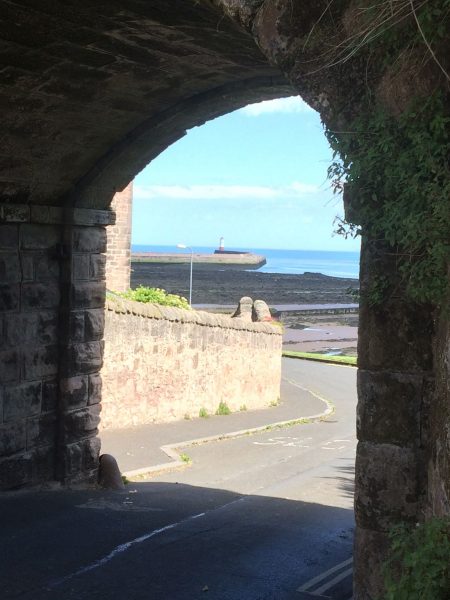 On the far side of the bridge is an information board explaining that this view is one painted by L.S. Lowry.  From the 1930’s until shortly before his death in 1976 he frequently holidayed in Berwick and around the town there are a number of similar information boards located at spots where he painted pictures. 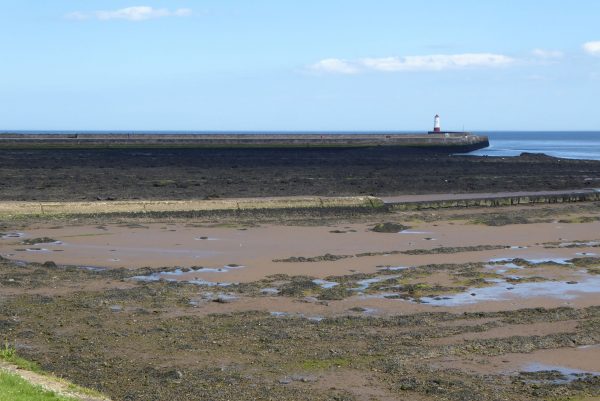 We walk along Pier Road and then head out onto the pier; work started on this in 1810 and was completed in 1821.  It had a major refurbishment in 2012 and is a great place to wander  with southern views of the Northumberland coast and the beach at Tweedmouth.  I imagine  they don’t often enjoy days as hot as this here and the locals have flocked to the beach. 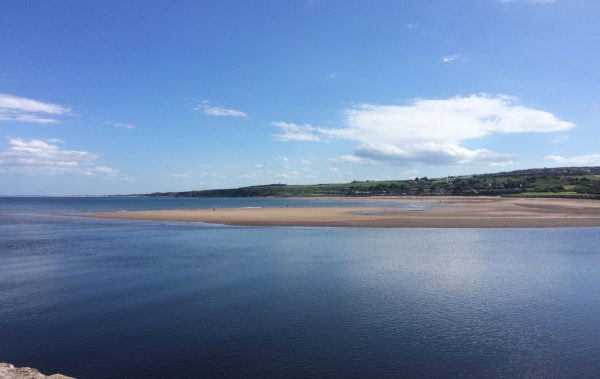 At the end of the pier is the lighthouse, completed in 1826, it stands at 43 feet and makes an impressive sight with its red and white paint. 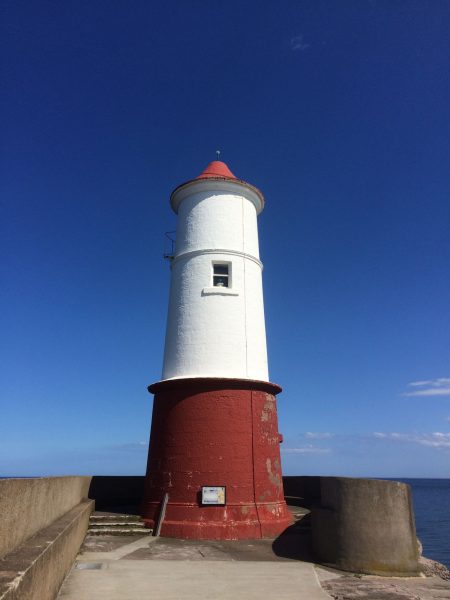 It is too hot for the dogs (and Lynnie) to walk far and this is a pleasant spot to while away some time, after all we have no need to rush so why not enjoy the view. 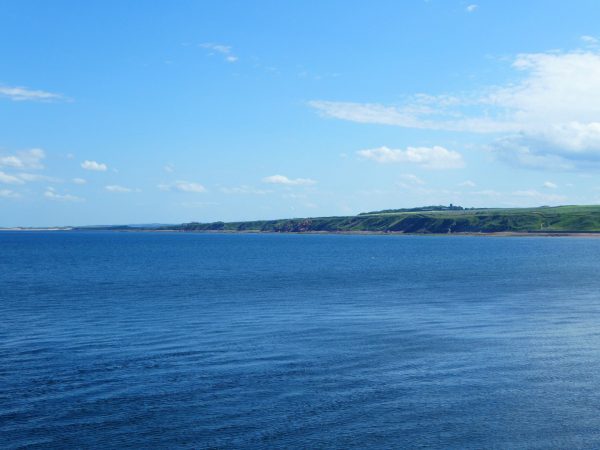 After walking back to Pier Road we return to the ramparts and turn right to continue our route around the town.  From the ramparts there are stunning views to the pier and lighthouse. 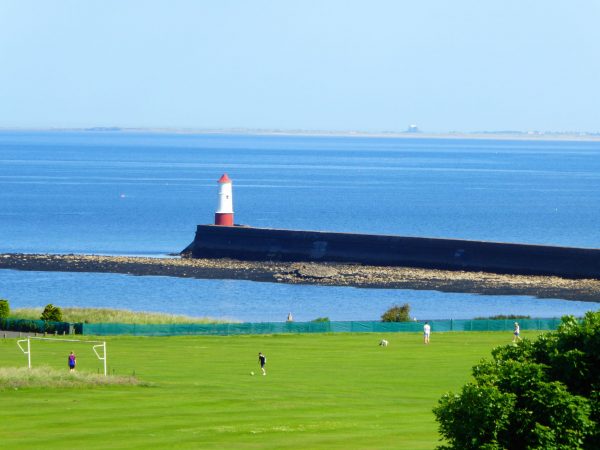 We then arrive at Windmill Bastion, which formed a major part of the town’s defences from the 16th century.  An information board tells us that the concrete structures, still in place, had guns mounted that were used between 1891 and 1908 to train volunteer soldiers to defend the coast from enemy warships. 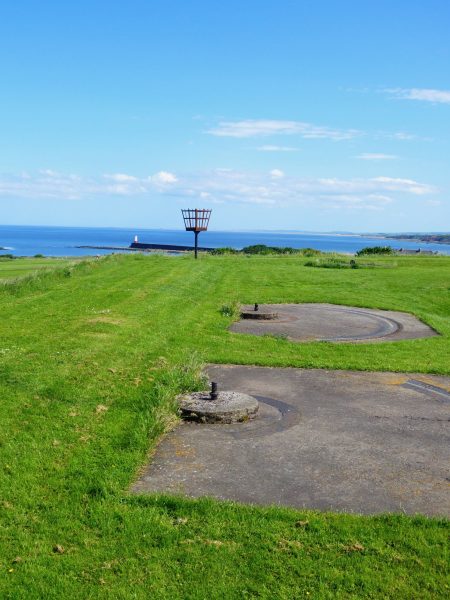 We are now alongside Berwick Barracks and decide to have a look around.  English Heritage run this and the helpful young lady on reception tells us that the dogs are allowed in the museum.  I am not too sure how interested Dexter and Crosby are in military history, but we are about to find out!

Apparently the barracks were built between 1717 and 1721 to protect the town during the Jacobite risings.  Further blocks were added between 1739 and 1741.  The Kings Own Scottish Border Regiment moved to the barracks in 1881 and stayed there until 1963. 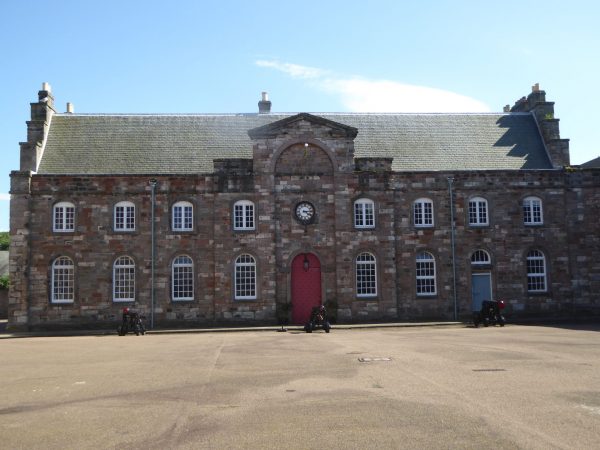 We spend an interesting hour wandering around the displays, we could have spent a lot longer but it is not easy with the dogs.  Crosby has difficulty distinguishing between the mannequins and real people and some obviously unsettle him and are greeted with a slight growl.

Back outside we head once more onto the ramparts and continue our wander around. 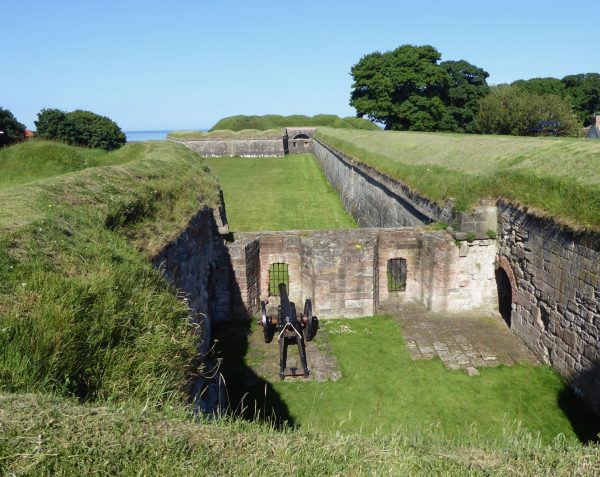 Having completed the circuit we leave the ramparts and walk into town heading for the town hall, this is another view that featured in a Lowry painting. 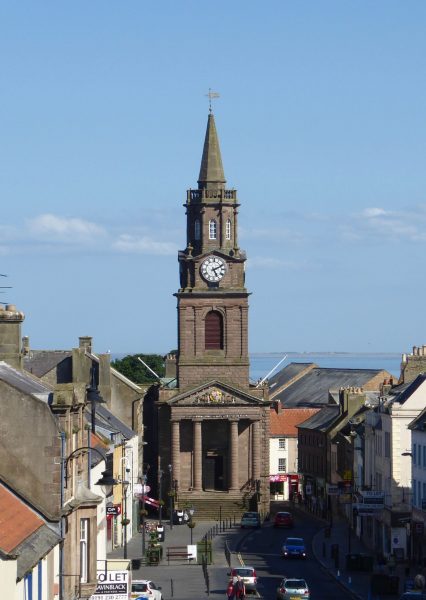 Then we leave the main street and amble along a few streets towards the entrance to the Old Bridge, this is an interesting part of town and there is an alleyway that Lowry also painted. 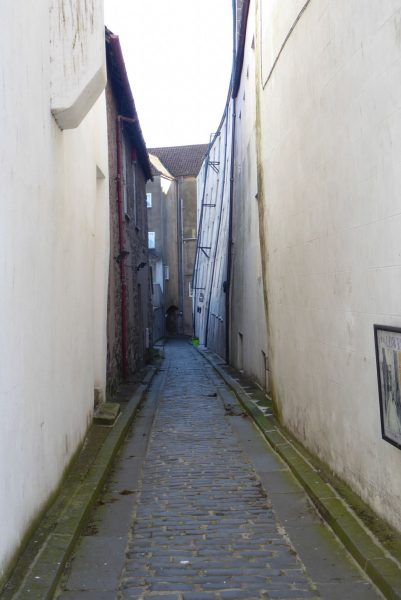 Heading back towards the car we pass the Bakers Arms which has a fine front window, I presume it is not unique, but I cannot recall seeing one like it on a pub before. 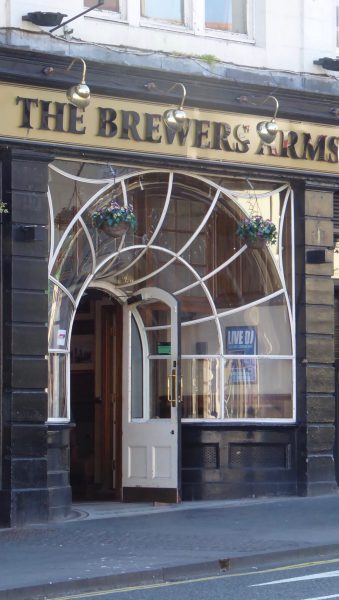 We have clocked up three and a half miles wandering around.  It is now time to get back to Paxton House and fire up the barbeque and crack open a cold beer!