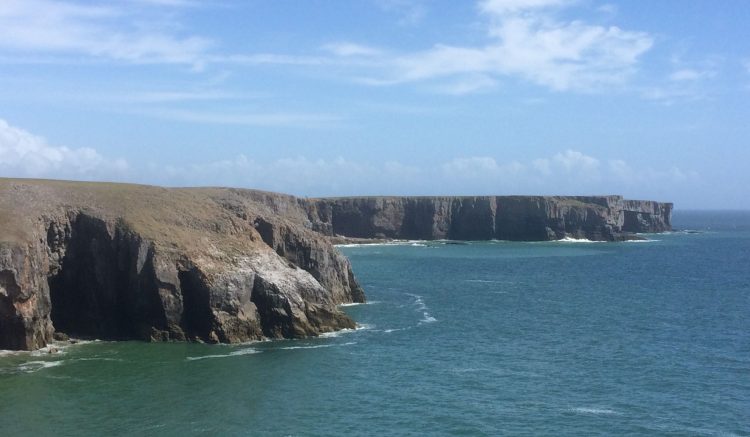 Ever since our arrival at Woodstock CL, Ron, the owner, has been telling us to take a trip to Stackpole and wander around Bosherston Lakes.  Up until today Lynnie’s back has not been up to walking far enough to get the full benefit of what we are told is a wonderful place.

There are several parking areas on the estate, we opt for Bosherston as it appears to provide the quickest access to the lakes and is therefore ideal if Lynnie finds she is struggling.

From the car park we follow the path down and are very quickly walking besides a lake.  I am not sure if technically this is one lake or three but they cover around 100 acres and were created between 1780 and 1860 by the Campbells of Cawdor, the then owners of the estate, by flooding the limestone valleys. 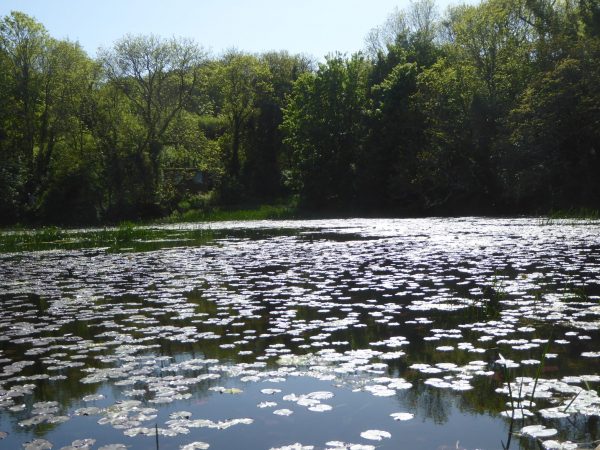 We are a few weeks too early to see the waterlilies in flower.  The lakes are said to be occupied by Otters so we keep an eye out. 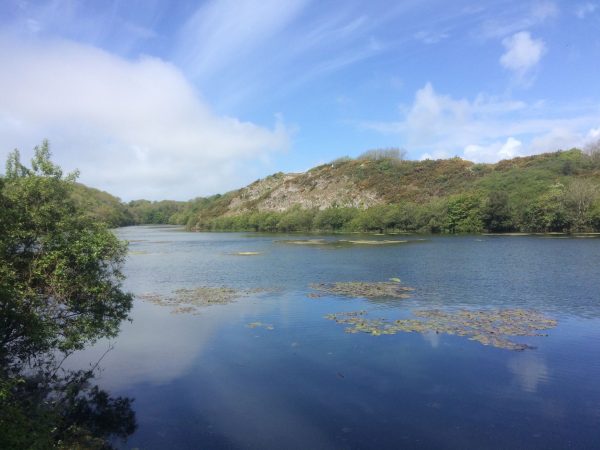 It is a very pleasant stroll and despite being half-term it is surprisingly quiet and we only meet the occasional couple heading in the opposite direction.  It is not long before we reach Broad Haven beach, with the tide out it has a vast expanse of sand and is hardly occupied. 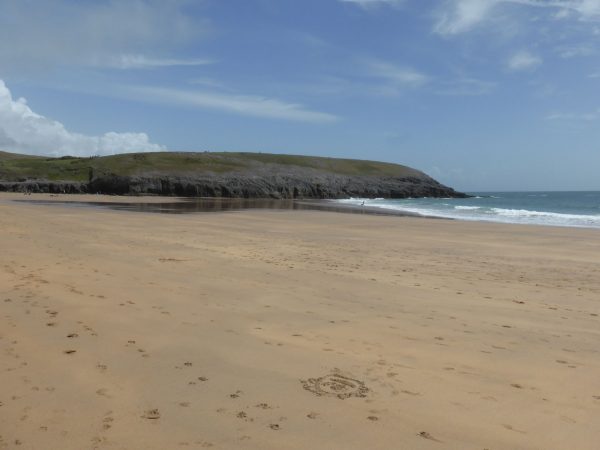 Just off shore to the left is the impressive Church Rock. 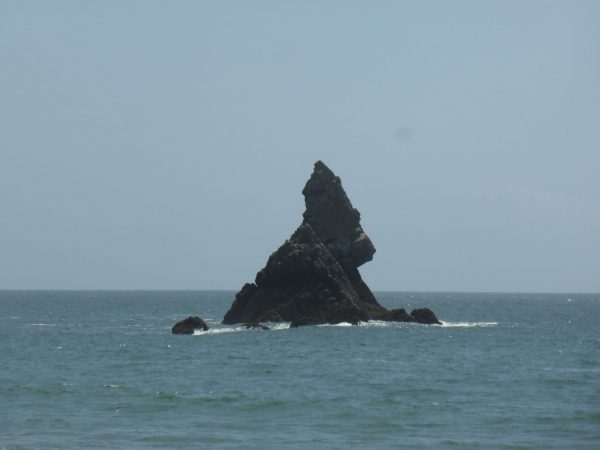 Further along the beach on the right is the larger Star Rock. 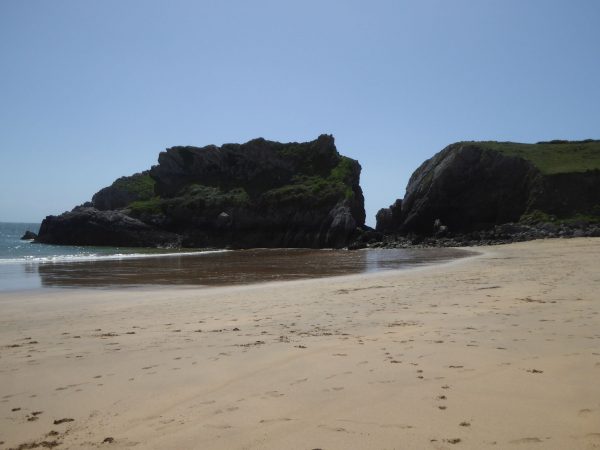 Leaving the beach we join the Pembrokeshire Coast Path, which climbs through sand dunes into the Stackpole Nature Reserve. 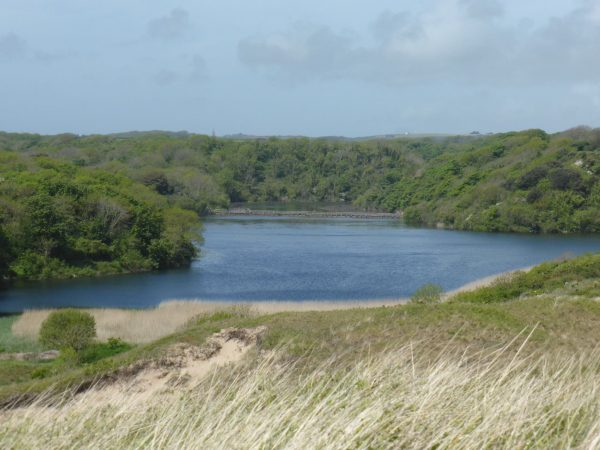 The views along the coastline from here are stunning. 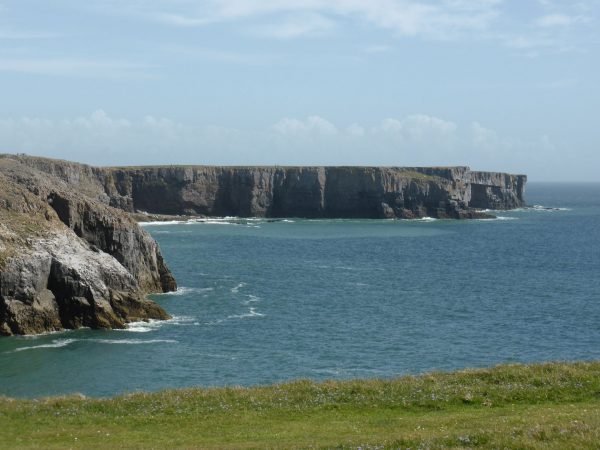 There are a number of path options, we stay slightly inland because of my dislike of cliffs, but this does not spoil the views and occasionally we end up close to the edge.  (Usually with Lynnie being closer to the edge than me!) 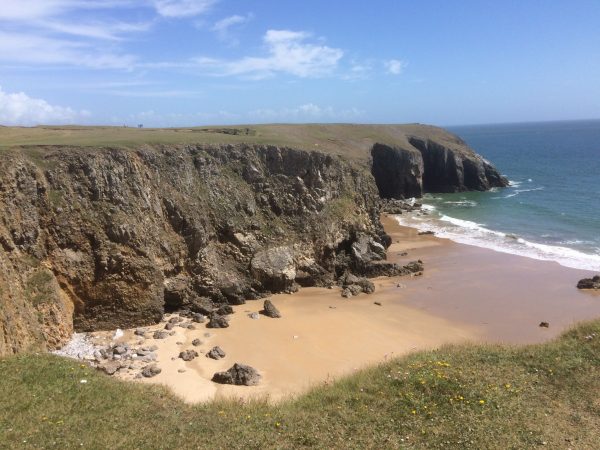 We are heading east and soon arrive at Barafundle Bay, the path leads down to cross the beach and then climbs up steps on the far side.  There are a few more people on this beach but it is still relatively quiet. 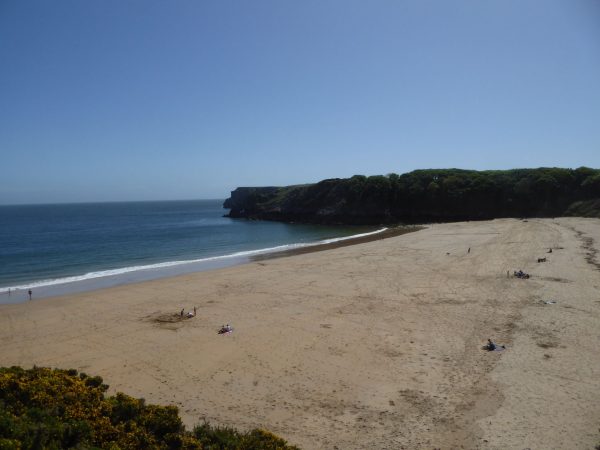 At every turn there are cracking views of the coastline. 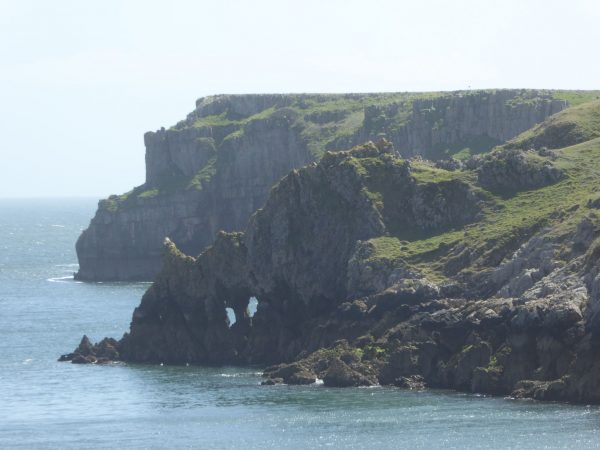 We have been to some wonderful places on our travels, but this is one of the most striking. 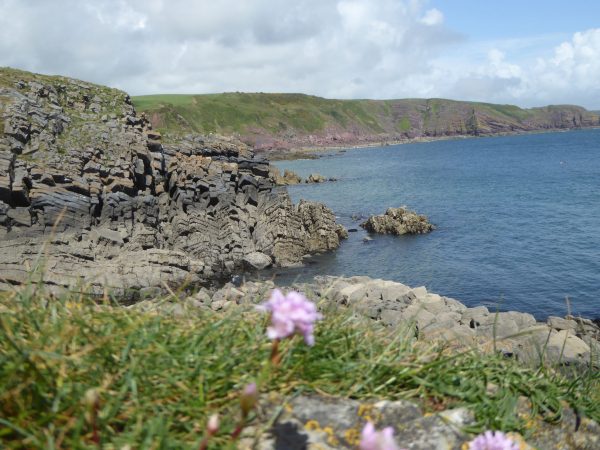 Our route descends down to Stackpole Quay, built by the Cawdor family to moor their sailing boat and it was also used to transport limestone from the local area. 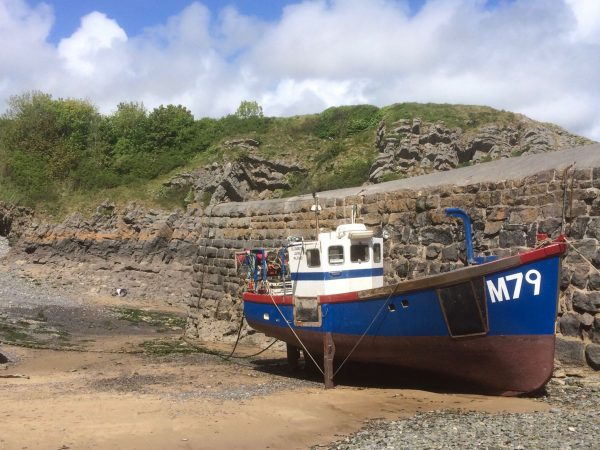 Leaving the quay we walk past the National Trust tea rooms and through the car park and then turn left and follow a broad fenced path across fields to reach a bridge across lakes. 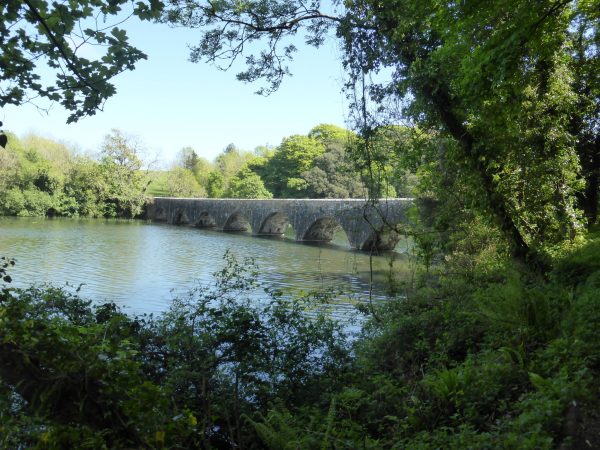 After crossing the fine eight arched bridge we turn right and walk up to what remains of Stackpole House.  In the 1730’s there was a grand Georgian house built in the Palladian style, and work began on landscaping the gardens and creating the lakes. 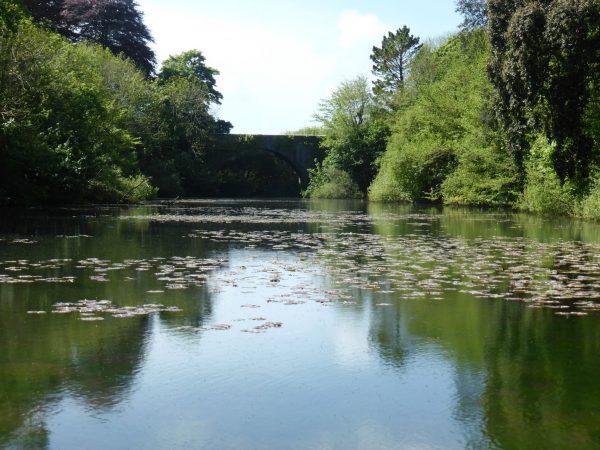 In 1938 the Ministry of Defence requisitioned about 6,000 acres of the estate to establish what is now Castlemartin range and during World War II soldiers were billeted in the main house.  During the war the lead was stripped from the roof and the house fell into rapid decline and was finally demolished in 1963. 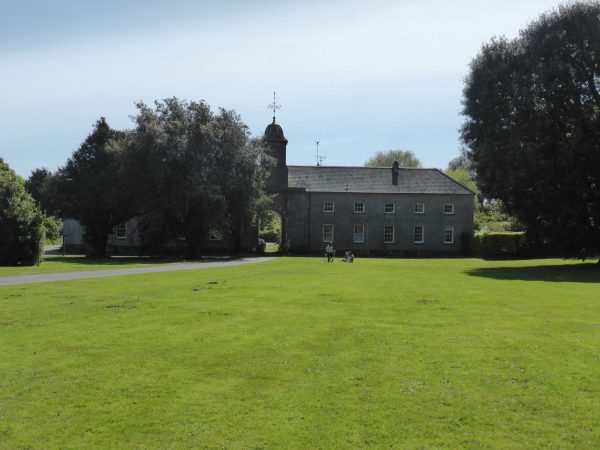 A few outbuildings remain including the brewery that used to provide the house with beer. 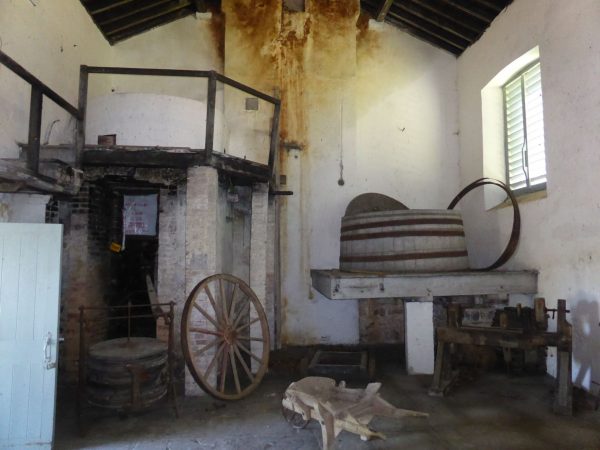 There is still more of the estate to explore but Lynnie has had enough, our wander around has covered just over seven miles. 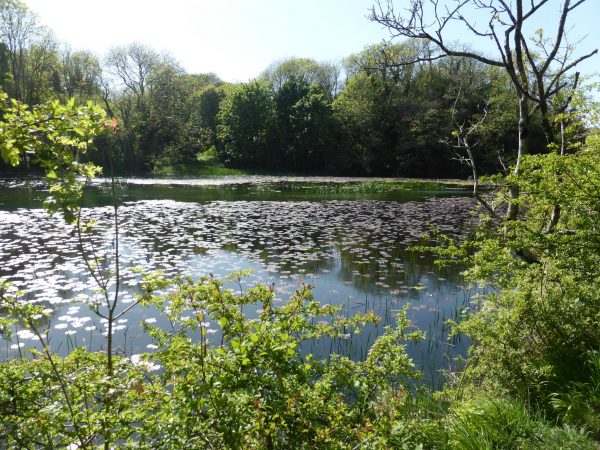 Back at the car we decide to visit the nearby St Govan’s chapel.  On a good day we would walk there from Bosherston, but Lynnie’s back is not up to it, so we drive along the road and enter the Castlemartin Range to reach the car park above the chapel. 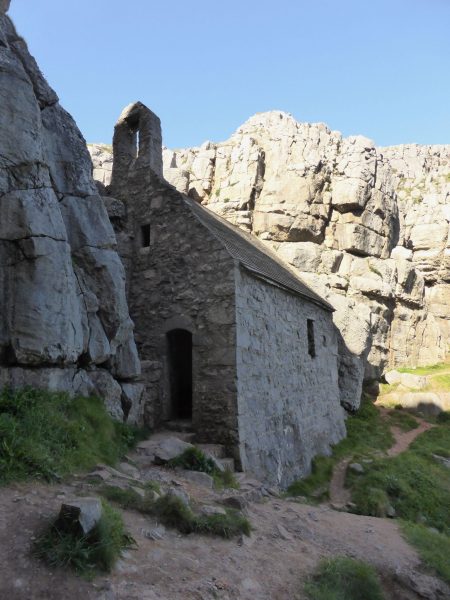 This place is rich with folklore.  It is said that St Govan was an Irish Monk who lived as a hermit in a cave in the cliffs, he died in 586.  There is tell that he might have been Gawain one of King Arthur’s Knights of the Round Table.  The chapel now standing in the cliffs was built over St Govan’s cave in the 13th century. 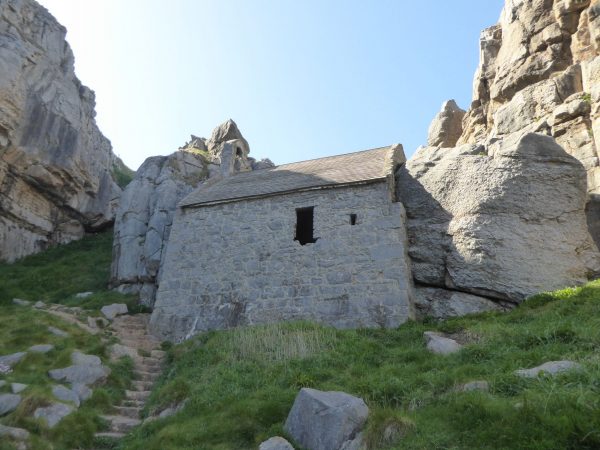 We take it in turns to go down to the chapel, the steps are steep and we decide it would be foolish to take the dogs.  Legend has it that if you count the number of steps going down and then count them on the way back up you end up with a different number, I must have done something wrong because I counted fifty-two both ways. 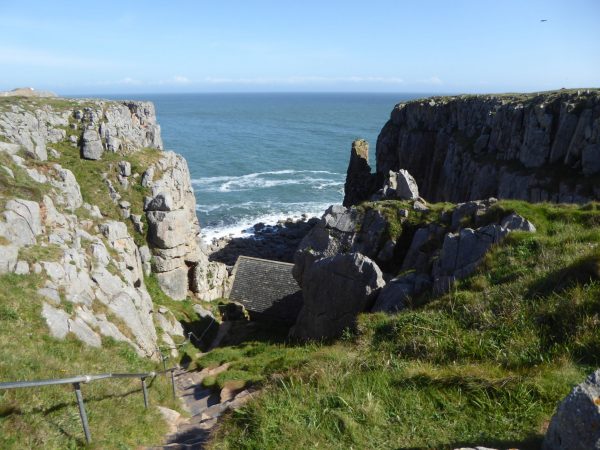 This has been a cracking day out and another place to revisit on another trip when hopefully Lynnie is fully fit. 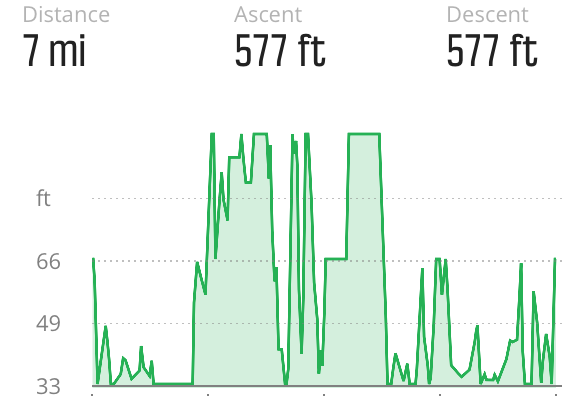