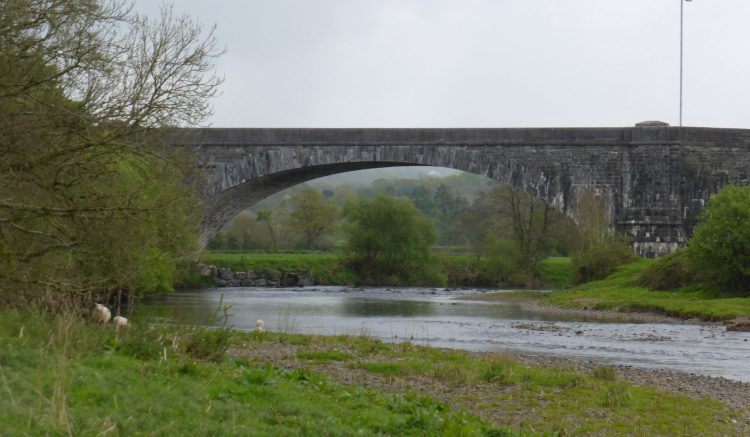 It is our final day at Barons Court CL and we intend to take a look at Llandeilo, a town we have not visited before. Our intention is to combine a wander around the town with a longer walk. When I take Dexter and Crosby out for their morning amble it is clear that Dexter is not feeling the Mae West, this is confirmed when he decides not to eat his breakfast, a previously unheard of event.

We decide to delay our outing until later to see how Dexter is; in the meantime Nick and Steph at Barons Court are really helpful in providing details of a local vet. We keep an eye on Dexter and by lunchtime he has perked up and decided to eat his breakfast, or should it now be called lunch? Crosby looks on in amazement; it is years since he was offered food in the middle of the day and wonders why he is not getting what he considers to be extra portions!

We park in the middle of Llandeilo close to the pubic library; that is a phrase to savour because it might soon be consigned to the past. In some parts of Britain libraries now appear to be considered a luxury. It is a service that in our new austerity world, driven by a constant desire for low taxation, is likely to disappear. I wonder at the sense of a government that seeks to discard the things that are key to making a society well balanced, and are hell bent on devaluing or even destroying the national health services, state education, social services and all the other public amenities that we once took for granted. Some might consider it progress, but I view it as foolhardy.

Leaving the car park we go through a passageway to join the main road running through the town and then turn up Carmarthen Street and soon reach the Town Hall. 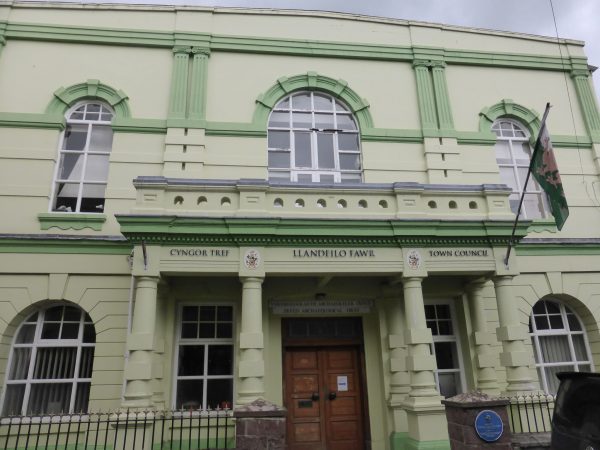 Wandering about we next come to what is now known as Abbeyfeld House a plaque on the wall explains this was formerly the George Inn, then in the 19th Century a vicarage and in the 1840’s it was used to billet troops during the Rebecca Riots. 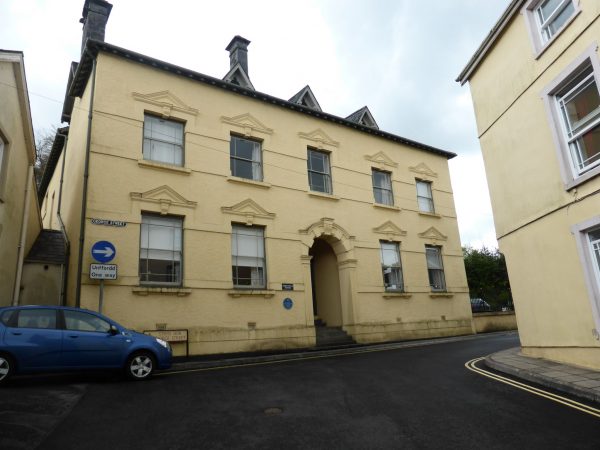 Apparently the riots stopped because the protesters were not keen on violence and criminal gangs were adopting similar tactics as a guise for their nefarious activities. At the same time the ringleaders were transported to Australia as convicts and the government reformed the turnpike legislation.

Around the corner is the Old Bank, the plaque on this wall explains it was formerly a branch of the Bank of the Black Ox, founded in 1799 in nearby Llandovery by a young drover David Jones it was actually called the Llandovery Bank. However, because all its bank notes carried an engraving of a Welsh Black Ox it became known as the Black Ox Bank. The bank remained in Jones’ family until 1909 when as the last surviving private bank in West Wales it was sold to Lloyds Bank. 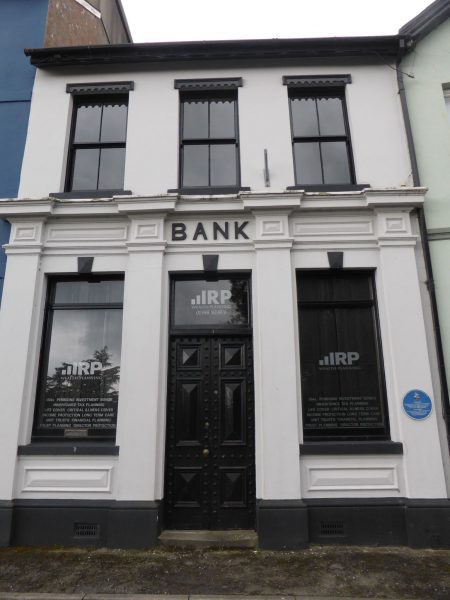 Our stroll around town aims to reach the starting point of our walk, Dexter is still a bit off colour but seems fine as we walk down Bridge Street and then take a lane on the right before we reach Llandeilo Bridge.

At the end of the lane we have a choice of footpaths, we take the one on the left entering fields besides the Rover Towy. From here we have a cracking view of Llandeilo Bridge. 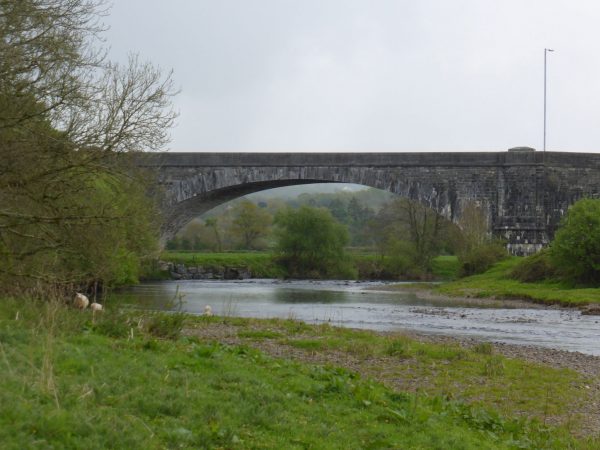 A Llandeilo resident named William Williams designed this single arched bridge; he was the county bridge surveyor. It was built between 1843 and 1848 and replaced a three arch bridge built to replace the medieval seven arch bridge, which had collapsed in 1795. The single arch spans 143 feet across the river and at the time was the third largest span in Britain. Williams died in 1846 so never saw his bridge completed. 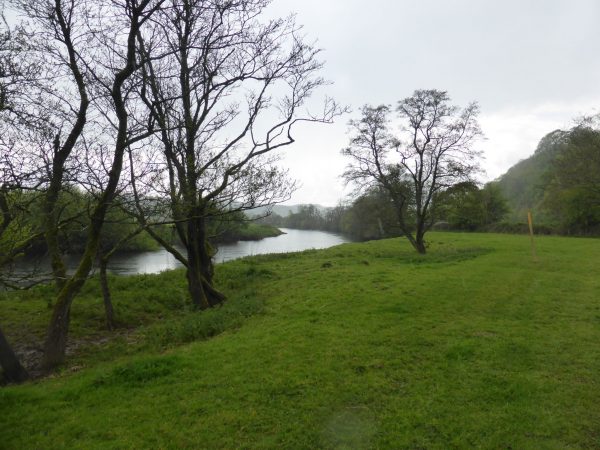 Our walk continues by the river and as we enter the next field it starts to rain heavily so we shelter under an oak tree and don our waterproofs. It becomes clear that Dexter is not feeling at all well and appears to be in great discomfort. His behavior is very concerning and we obviously can’t continue our walk, we therefore retrace our steps across the fields. Along the way there are a couple of times when Dexter just stops and I thing he might need to be carried.

Back at the car we make a couple of calls and are soon heading off to the emergency vet at Ammanford. A visit to the emergency vet on a Bank Holiday Monday is never a cheap affair, but I have to say the service we received at Bush House Vets was exceptional. The examination of Dexter could not have been more thorough and the vet was keen to chat for a while (at no extra cost) so that he could observe Dexter for about half an hour. The diagnosis was a severe stomach upset from something he had picked up on a walk so he received a couple of injections and left with a course of antibiotics. If this vet weren’t 150 miles from home I would be coming back here for the dogs’ annual check ups!

It has been a worrying (and expensive) day, but back at Barons Court CL we soon see signs that Dexter is perking up. He will be on chicken and rice for a few days so he thinks things are not all that bad. I am not so sure what Crosby will make of it when he gets his normal bowl of dog food in the morning! 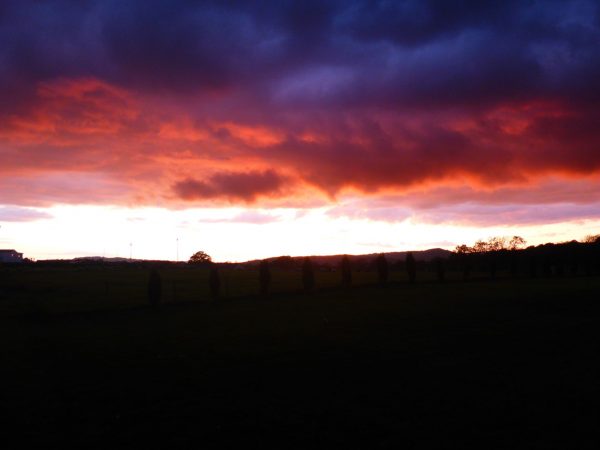