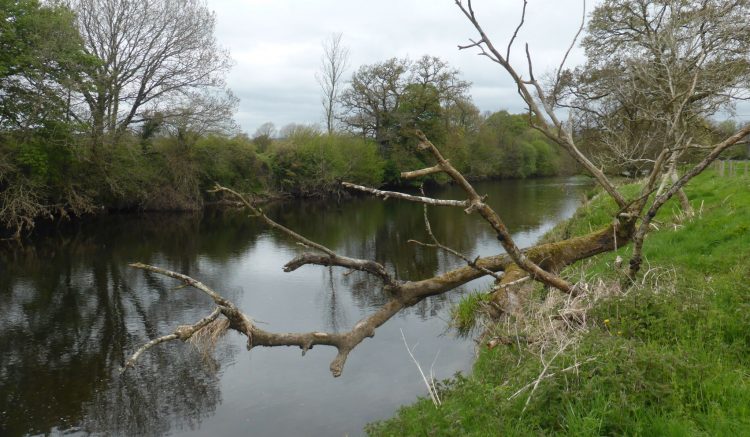 We are often reluctant to leave a site, it is not just the packing up and getting on the road, but the fact that just as we are becoming settled in our temporary home it is time to move on. Leaving Tirmynach Farm CL was exceptionally difficult because we loved the site and it’s convenient location to Hay-on-Wye, plus the walking has been stunning. There is no doubt we will revisit as soon as our travel plans allow.

We are moving from the east side of the Brecon Beacons to the west side and returning to Barons Court CL at Llangadog, this is a site we visited in 2014 and have been looking forward to revisiting. After a short journey we are soon set up and heading out for a walk with the dogs. There is good access to walks from this site.

From the site entrance we turn right walking down the lane to the junction then cross the road taking a footpath almost opposite to enter pasture. After crossing half a dozen fields we reach a road and turn left soon reaching the village green. 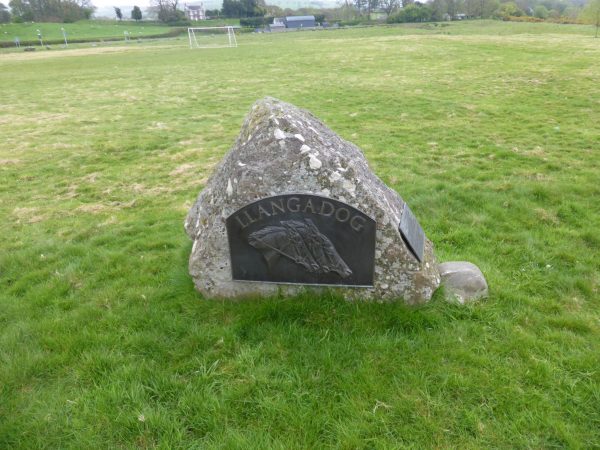 On the green there is a stone with a bronze plaque showing horses racing on one side and on the other a plaque explaining that Llangadog has held a horse racing meeting on Easter Monday since 1884, apparently it is the oldest trotting meeting in Wales. 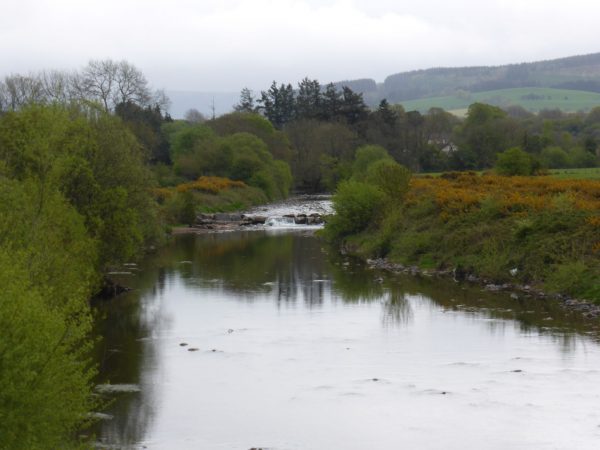 We cross the Afon Sawdde and then turn right to walk across the common, soon joining a lane that sweeps around Felindre and heads towards Devanah Farm. After passing the farm the lane becomes a track heading towards the River Towy (or Afon Tywi if you prefer the Welsh version). To our right Glanrhyd Rail Bridge crosses the river, our route is left following the footpath alongside the river.

This is a tranquil spot, but in recent history it was a scene of tragedy. On 19th October 1987 at approximately 7.00 am the Swansea to Shrewsbury train, consisting of two carriages, left the tracks as it crossed Glanrhyd Bridge. During the night a section of the bridge had been swept away by the swollen river. Tragically four people, including the driver were killed, but six others were rescued.

Walking besides this tranquil river it is hard to believe it could cause such devastation, the water level is low but there are signs in the trees of debris from when it has flowed a lot higher. 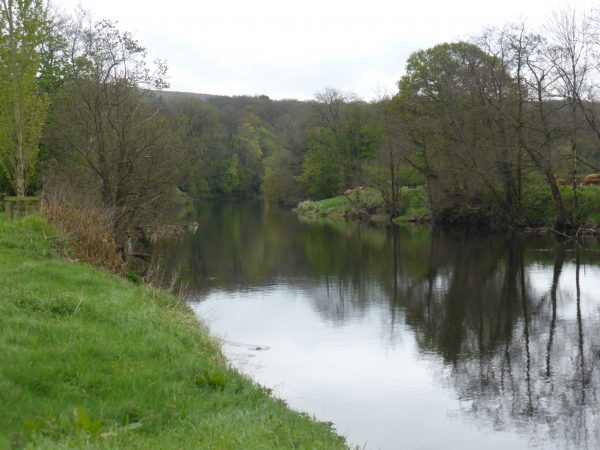 After three quarters of a mile the path crosses a stream and then leads into woodland. Here the footpath takes a left turn to enter a field and then doubles back to follow the hedge line across marshy land. After the recent dry spell this is firm under foot, but I would imagine it could be very sticky after heavy rain. The route then follows the edge of the field to head upwards to a gate where we turn left and follow the path through fields with fine views across the valley. 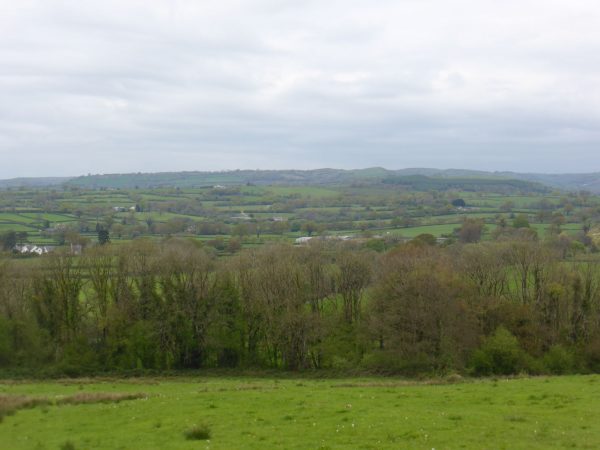 We soon enter a copse and are welcomed by a combination of bluebells and bird song. 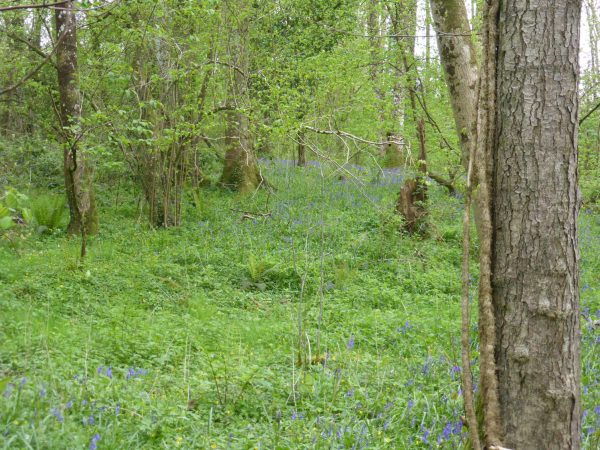 On leaving the woodland we reach a junction of tracks, we turn right and head steadily uphill on what soon becomes a track and go through a couple of gates to reach a minor road. Our original plan was to join a footpath here and head further to the east, however, we each have a painful knee and walking at any pace is a bit 0f a struggle. Nor do we have time to spare because we are meeting friends for a meal this evening. So we turn left on the road and head back towards Llangadog.

Soon we see, in a field on our left, what looks to be a fenced standing stone. Strangely it is not marked on the map and despite later research I cannot find any reference to it. Perhaps it’s a memorial of some sort? 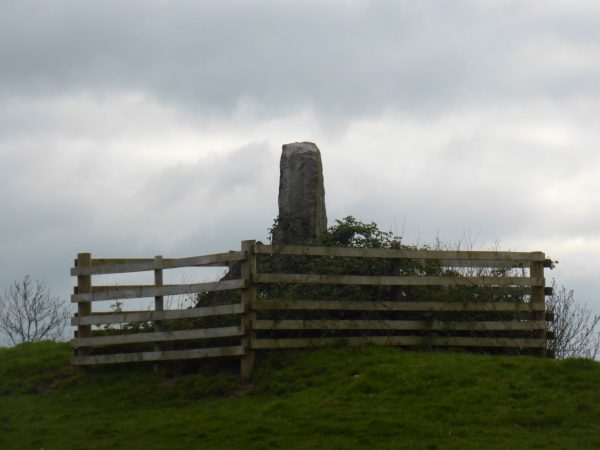 It is just over two miles along this quiet road to Llangadog, as we near the village we are thankful we did not extend our walk, as we are tight for time. I ask Lynnie which of the village pubs we are eating in and I am told it is the something Lion. In the village we pass the Black Lion and it has obviously been closed down for sometime. A few moments of panic ensue before we ask a local who tells us that just around the corner is the Red Lion. How confusing is that!

There are two other pubs open in the village, the Goose and Cuckoo and the Castle Hotel. I am surprised they did not go the full hog and call these the Golden Lion and Lions Head! Our meal at the Red Lion is very enjoyable with good friendly service. Just what we needed after our six mile wander. 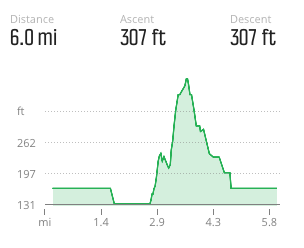