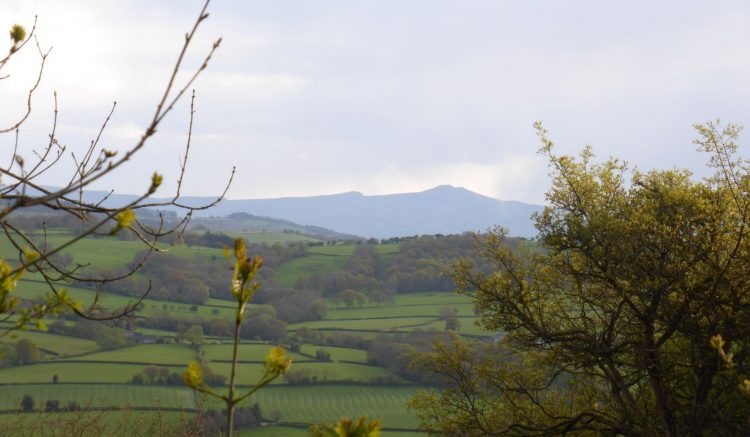 Following yesterday’s walk in the Black Mountains Lynnie has a painful knee, so a relatively short walk from the caravan is her request for today. We have differing views of what constitutes a short walk. For me it is around seven miles, where as Lynnie thinks more in the region of three to four.

We leave Tirmynach Farm CL by walking through the farmyard and onto the lane and turning right. This is a really interesting farm with a barn that has ornate pillars thought to be a sign of its historic past. Apparently Tir Mynach means Monk’s Land and this farm formed part of the land of the nearby Cistercian Abbey at Clyro. By the farm gate there is a spring which is still known as the Monk’s Well.

Just a few fields to the east on neighbouring Boatside Farm was a large Roman Fort built around AD60 it covered approximately 26 acres. It was established by the Romans as part of their attempts to subdue the Silures tribe of Mid Wales.

This area is said to be the site of major conflict with the Roman Historian Tacitus recounting in his Annals “a camp prefect and several cohorts were deputed to build garrison posts in Silurian territory. The Silurians attacked, killing the prefect, 8 centurions, and ‘the boldest’ of the rank and file soldiers. If not for the timely arrival of reinforcements from nearby camps, the legion would have been lost ‘to the last man”.

Wherever we go we find it thought provoking to consider who might have been walking on the land in times past that we now wander over.

On reaching the B4351 we turn left and walk down into Hay-on-Wye, crossing the River Wye. At the T-junction we turn left and then take the second turn on the right to walk along Nantyglasdwr Lane. At a footpath sign on the left we join the Wye Valley Walk and head across fields. 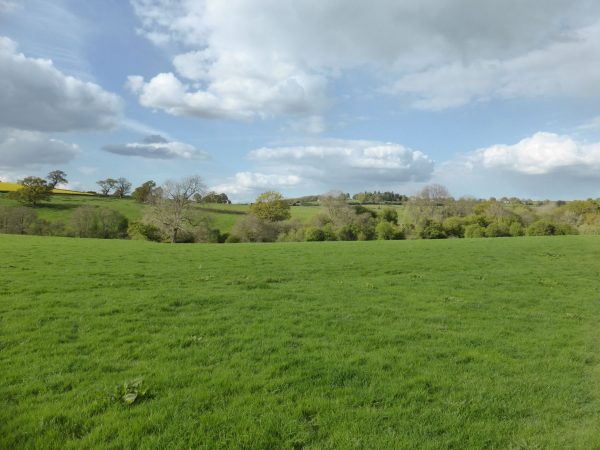 The map shows that we are soon walking across Summerhill Golf Course, there are no signs that it is currently a golf course and later research reveals it closed a couple of years ago when the owners decided to return it to farmland.

This is nice easy walking and the sun is trying to break through the clouds, after a couple of fields we cross a stream via a footbridge. 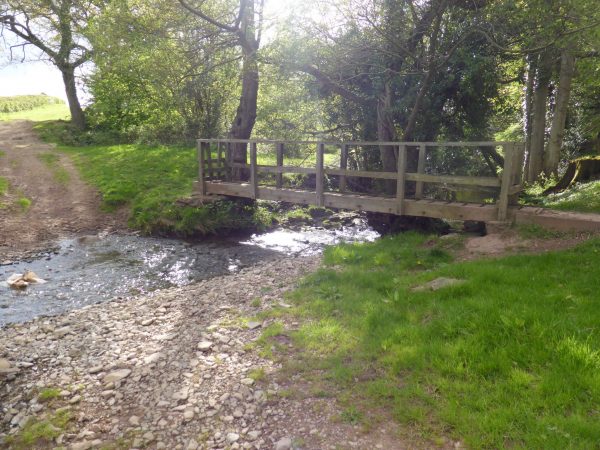 After a few more fields we reach Priory Farm, here we turn right along the minor road, leaving the Wye Valley Walk. On reaching the junction with the B4348 we head straight over to join a footpath that runs along the edge of a field with woodland to our left. 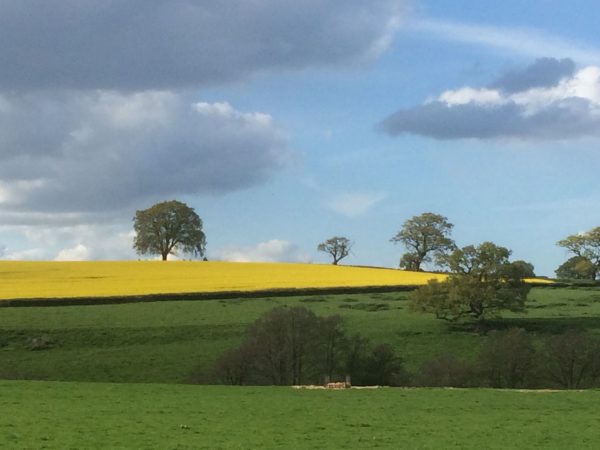 We have reached a series of stiles that the dogs need lifting over and it becomes a bit of a chore and after the path swings to the right and joins another minor road close to Harewood Farm we consider our options.

We decide to abandon our intended route across the fields to Harewood Farm instead turning left and walking along the road. It is easier going for Lynnie’s sore knee and I will not have to worry about lifting dogs over stiles. As we approach a road junction we see a footpath sign on the right besides a new metal gate, easy access just what we like!

A couple more new gates and we are approaching the minor road, I comment on how good it is that some landowners replace difficult stiles with gates and then we meet a stile with no means for the dogs to go through or round. They have to go over! The only problem is there are steep steps on the other side onto the road. Easy enough for us but it proves difficult to negotiate the dogs safely over and down.We turn right and walk up the lane. I am now in full mithering mode, technically this is not a blocked path, but it could be made a lot more accessible. After our numerous experiences of blocked or poorly maintained paths I have decided to start reporting those that we come across.

Now back on the road we turn right and about half a mile further on take a tarmac lane on our right leading to Mouse Castle. This is a Motte and Bailey hillfort with steep sides that were created as protection from invaders. Apparently, in the 14th century it belonged to the de Clanowe family. The Woodland Trust now own the castle and surrounding woods. 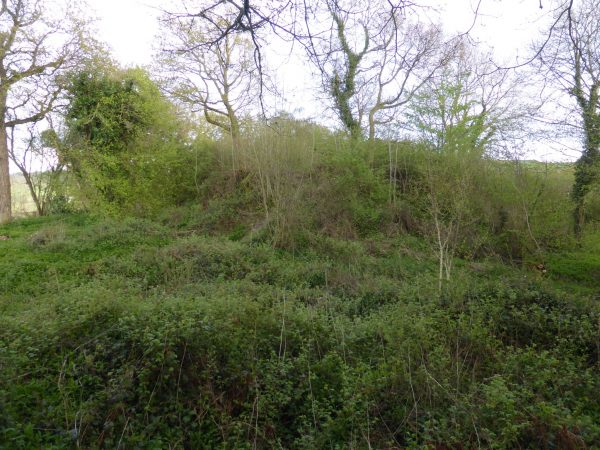 We wander up to the castle and have a look around, there are great views from up here and it easy to see why it would have been chosen as a location for a fort. 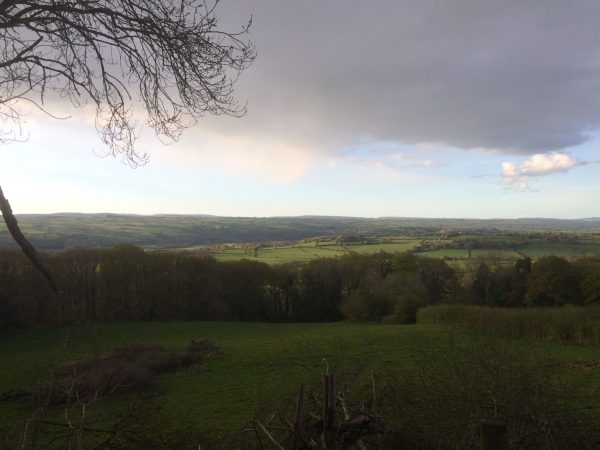 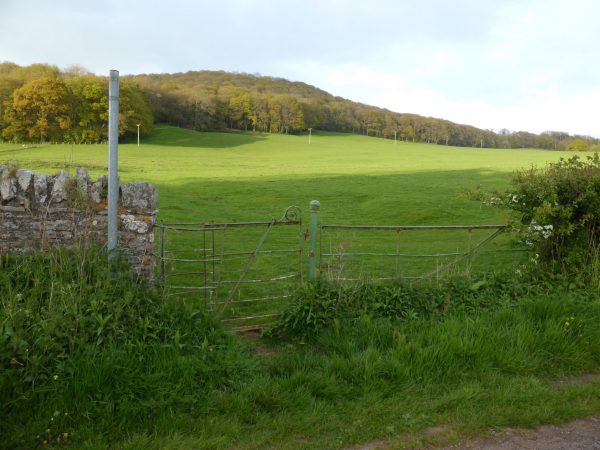 From here we follow the roads back into Hay-on-Wye. Over the last few days we have wandered by the Town Clock on a number of occasions. Apparently it was built in 1884 with funds from a legacy left by a Captain Brown for a clock for the church tower. However, his executors thought it more fitting to build a town clock, public hall and corn exchange. Only the Clock Tower was built at a cost of £600. 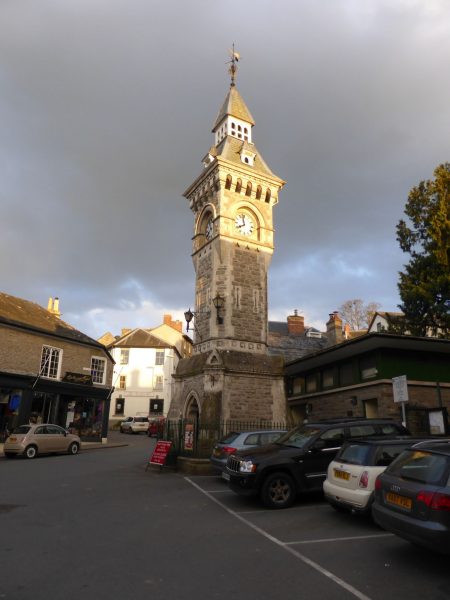 It is time for us to head back to Tirmynach Farm CL; our walk has covered eight miles, so closer to my definition of a short walk! 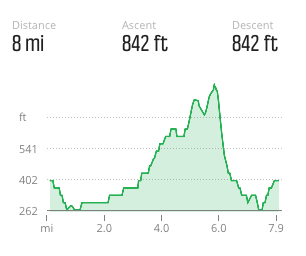