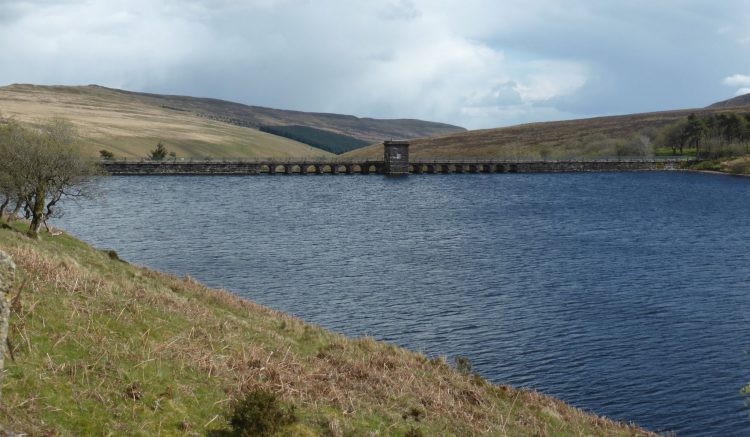 The weather has turned decidedly chilly today; the local forecast suggests there could be wintery showers with hail, sleet and snow all a possibility.  So I have planned a walk into the Black Mountain’s!  Lynnie is relieved to hear we are starting from the small car park on the Gospel Pass at the foot of Hay Buff and Lord Hereford’s Knob.

We sit in the car and wait for the first hailstorm to pass (“this doesn’t auger well”, says Lynnie) before leaving the car. 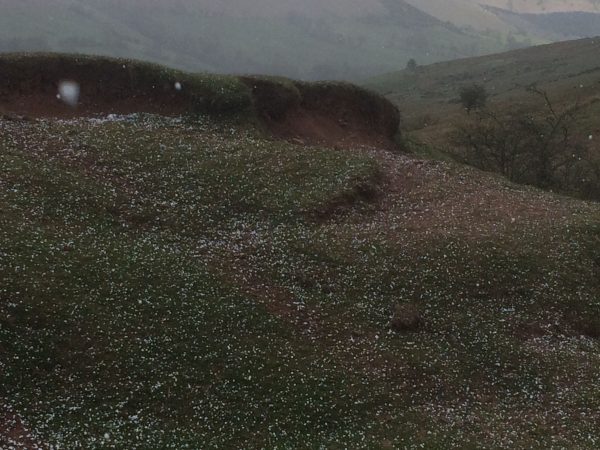 We turn and take the path to the summit of Lord Hereford’s Knob also known as Twmpa, immediately we can see showers sweeping through the valley below us. 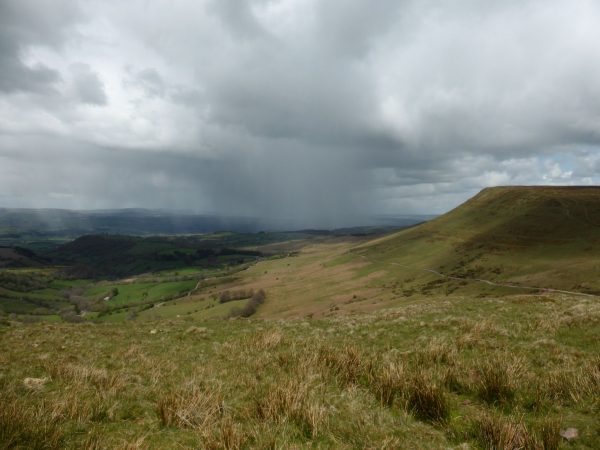 The path is easy to follow and we soon reach the cairn at the summit, we are 2,260 feet above sea level and the wind is whistling up here, Lynnie looks ready to take off. 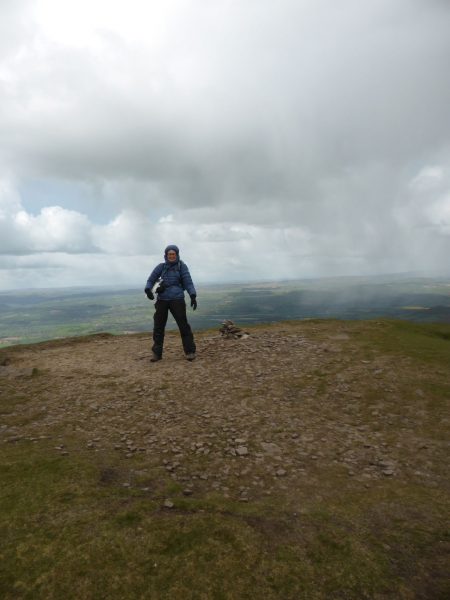 To our surprise there is a chap taking a call of nature on this exposed summit, fortunately he is facing down wind with his back to us, he looks some what shocked to see us when he turns around.  It is not uncommon for me to look for a bush or a hedge whilst out walking, but I have never felt the need to relieve myself in such an exposed spot.  I wonder if it is some ancient tradition that on reaching the summit you have to leave your mark!  Lynnie makes it clear that my flies should be kept firmly closed!

We continue walking along the edge of the ridge heading for the trig point at Rhos Dirion.  Above us a glider is using the thermal streams from the escarpment, it is earie how it silently appears above us.  This is not something I have ever fancied doing, I prefer to keep my feet firmly on the ground, but I do see the attraction of looking at such stunning scenery from above. 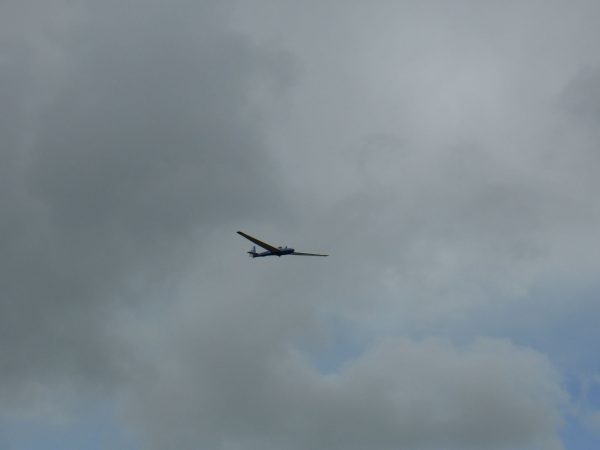 It is almost two miles between Lord Hereford’s Knob and Rhos Dirion but it is absolutely cracking walking.  Even with a precipitous drop to my right I feel comfortable, the path runs close to the edge but not right on it.  The views are stunning and the wind is blowing out the cobwebs.

On reaching the trig point we stop for Dexter and Crosby to have their photograph taken, another one for their album!  It is bleak up here and sleet is blowing horizontally, it does not feel like spring! 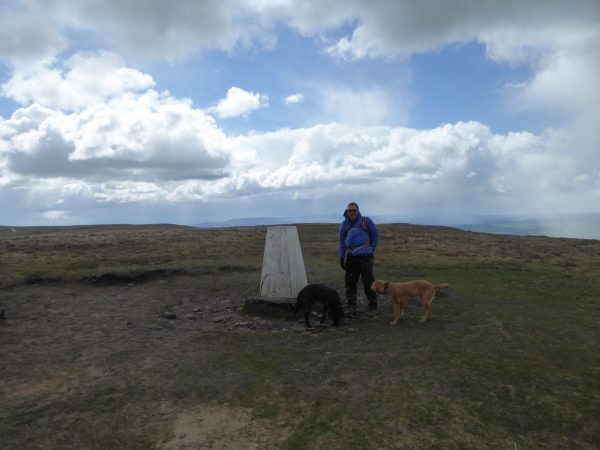 There is a crossing of paths here, but we carry straight on.  This is peaty ground but with it being so dry it is easy going.  On reaching another crossing of paths we turn left to follow the well marked track towards Grwyne Fawr Reservoir.   Lynnie has control of Crosby and marches on ahead leaving Dexter and I to trudge behind 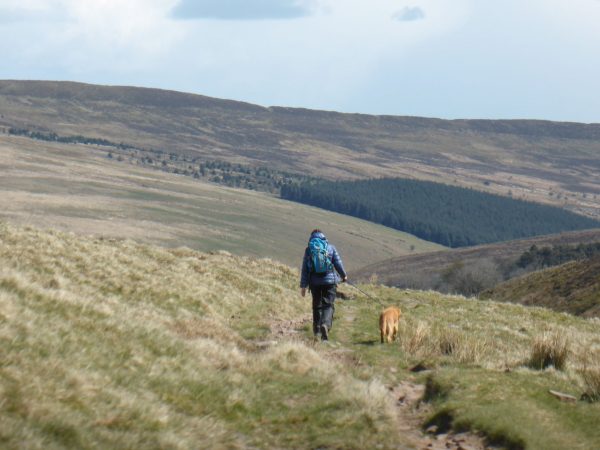 In the shelter of the Grwyne Fawr valley it is pleasantly warm and we are soon shedding layers.  It is worrying how dry the ground is.  Normally when you walk in areas like this the concern is the weather closing in, but as we walk I start to wonder where you would head for cover if a fire broke out.  The wind is so strong and with everything dry like a tinderbox, it doesn’t bear thinking about.  There is always something to worry about in the world that Freddy lives in! 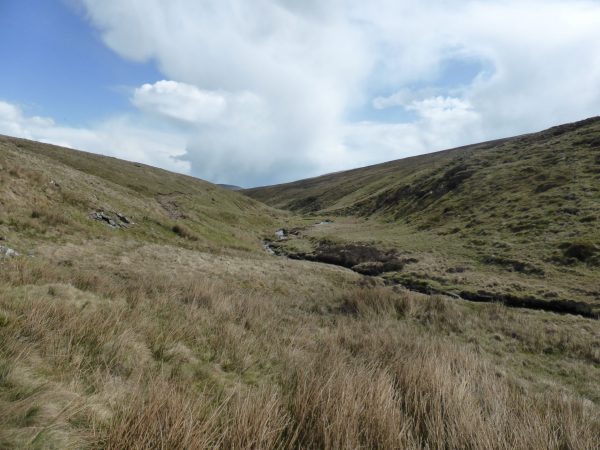 Apparently in 1136 this valley was the location of the murder of Richard de Clare, 1st Earl of Hertford by the Welsh under Iorwerth ab Owain and his brother Morgan, grandsons of Caradog ap Gruffyd.  This was a catalyst for years of conflict between the Welsh and English in this area.

It is difficult to believe this tranquil spot was once the site of a battle it is stunning countryside and we are soon at the start of the reservoir.  We saw the dam whilst walking from Llanthoney last year, but this is the first time we have been so close. 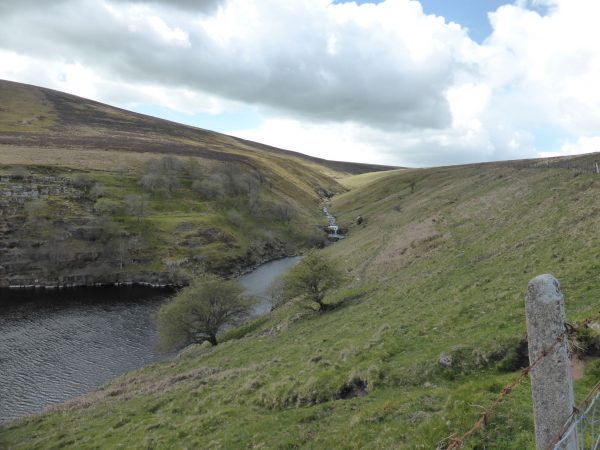 Grwyne Fawr Reservoir is not huge, completed in 1928 it has a four hundred million gallon capacity.  It was built to satisfy the ever-increasing need for water of the booming population working in the coal and steel industries in the valleys below.  Water from here is gravity fed to Abertillery. 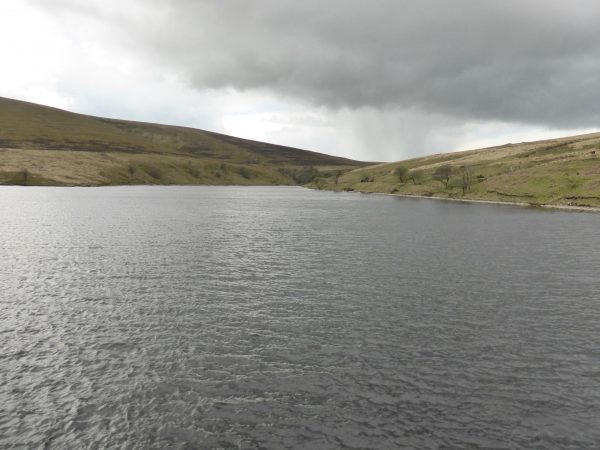 Construction started in 1912 but problems soon arose when the road constructed could not take the weight of the traction engines used for haulage.  Plans were put in place for a railway line but this was delayed first by problems with local landowners and then the onset of the First World War.

Work restarted in 1919; with the railway constructed work could start on the dam, apparently 200,000 tons of sandstone were quarried with large boulders set into concrete to form the dam.  It is 130 feet thick at its base.

To construct the dam a whole community was established at Blaen-y-cwm a bit further down the valley complete with hostels, canteens, schools, hospitals and a police station. It is amazing how these villages were constructed and for a short while thrived but left little evidence of their existence. 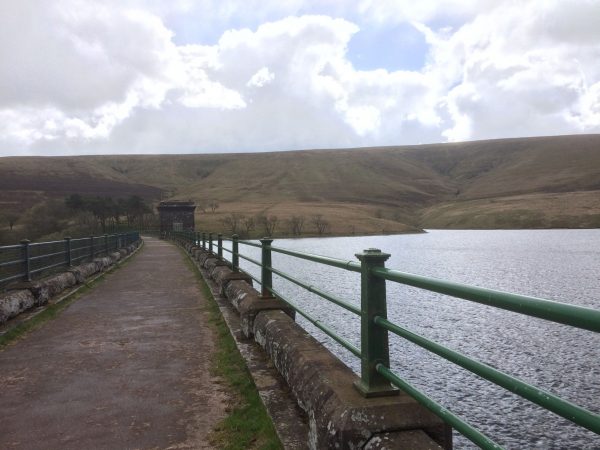 We stop to look the dam from close quarters and are suddenly hit by a squall of hail.

When it stops we walk onto the dam and look back up the reservoir, I am not so keen to peer over the edge of the dam.  I later see pictures of water flowing over the dam, it is a remarkable sight, but today the water level is too low for this to happen. 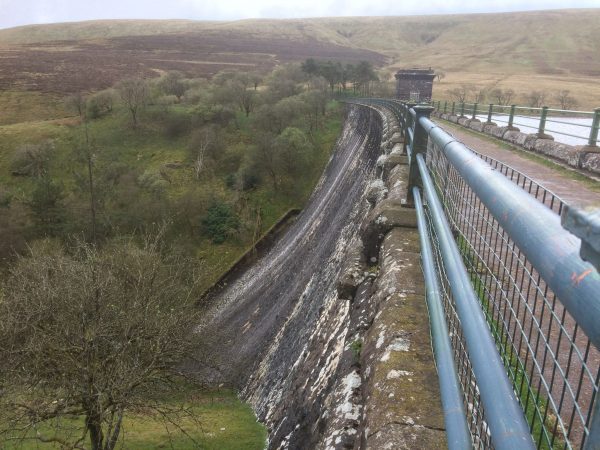 Our route continues along a track, clearly built for the construction of the dam, but I am unsure if it was the route of the railway or constructed for some other purpose.  Either way it is a major engineering achievement the drop to the valley below is pretty steep. 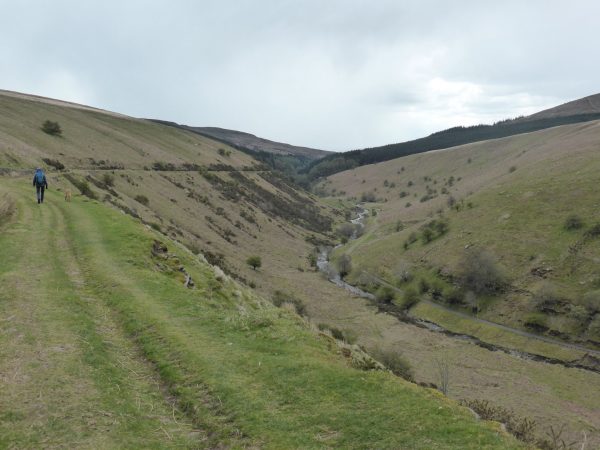 The track leads to the edge of woodland dominating both sides of the valley, this is the Mynydd Du Forest, our route soon takes a sharp left doubling back and climbing steeply.  We follow the footpath sign through the trees to climb steadily across the hill in front of us to reach the top of the ridge by a set of cairns. 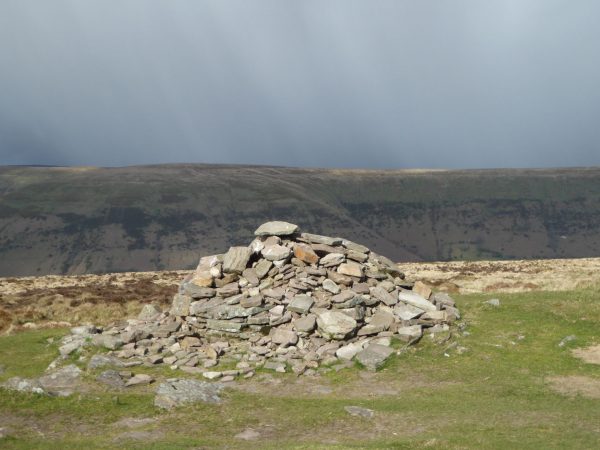 Here there is a crossing of paths and we stop to get our breath back and for Lynnie to rest her knee that is giving her jip.  Not a good sign when we are only half-way on our walk.  We head straight across the ride taking the path traversing the side and make our way downhill towards Capel-y-Ffin.

I have previously written about the monastery that appears on our right and the monument to Father Ignatius besides the lane on our left.  Since we were here last July the monument has had work done on it making it more visible and accessible.

We reach a minor road and turn right and then after a short while turn left at a junction and walk to St Mary’s Chapel at Capel-y-Ffin.  This small chapel, built in 1762, is just 26 feet by 13 feet.   Last year Lynnie went inside whilst I sat outside with the dogs, today I venture into this place of worship, it is wonderful.  I am not a believer but there is a simple beauty in this small church from the detail of the carved font cover with its mouse, trademark of Robert (Mouse man) Thompson (1876-1955) and assumed to be his to the wooden balcony. 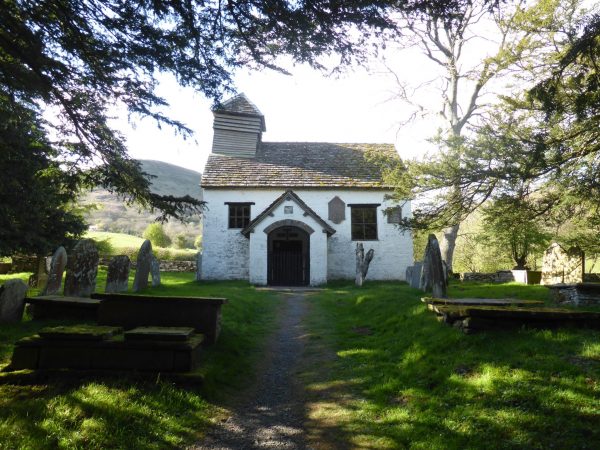 The alter window has a cracking view of the hills and etched into it is the inscription “I will lift up mine eyes unto the hills from whence cometh my help”.  Entering the church I carefully ducked below the very low door lintel.  On my way out I am not so lucky, either that or divine intervention has struck me with a bolt of lightning, next thing I know I am on my knees in the porch seeing stars with a lump appearing on the top of my turnip.  Perhaps it was a sign?  If it was the chap trying to communicate from above has a strange way of getting your attention.

We start off again from Capel-y-Ffin along the Gospel Pass road, originally I had intended leaving the road to pick up the path leading up to the Darren Lwyd ridge and following it back to Lord Hereford’s Knob.  However, I am a bit dazed from the blow to my bonce and Lynnie is muttering about her painful knee.  So we take the sensible option of the shortest and easiest route and continue along the road.

It is a pleasant walk and we encounter very few cars, when we left Capel-y-Ffin we were in sunshine but persistent hail and then snow showers soon lower the temperature.

It is amazing how quickly the weather changes.  This must be a bleak spot in the depths of winter. 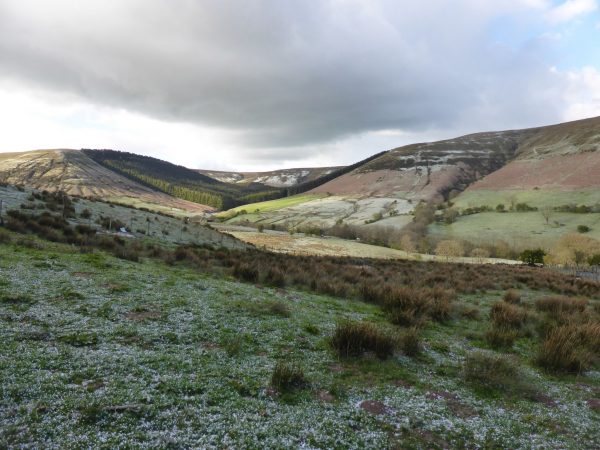 We are relieved to arrive back at the car and get some respite from the biting wind; it is at times like this that I appreciate the Freelander’s heated seats and steering wheel.  Our walk has covered close to twelve miles across stunning countryside, we have only encountered four other people and so have had it pretty much to ourselves. 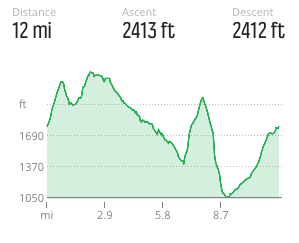