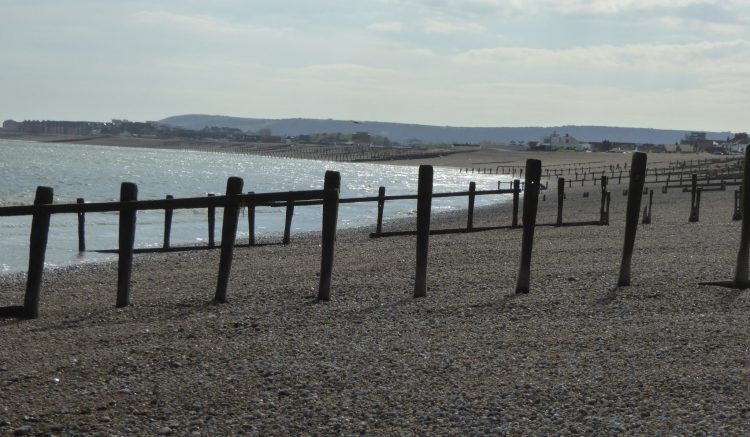 After walking across the South Downs yesterday we have a change today and walk a bit more of the coast.  It has never been our intention to walk the coast of Britain, but after doing so many coastal walks in the last couple of years we have covered quite large chunks, so much so that Lynnie wants a map so she can colour in the sections we have completed.
Today we start our walk on the east side of Eastbourne, picking up where we left off a couple of days ago.  Because of the time of year we are able to park for free on the roadside in Royal Parade alongside Fishermans Green.  We start our walk by going through the park and then turning left to head east along the coast. 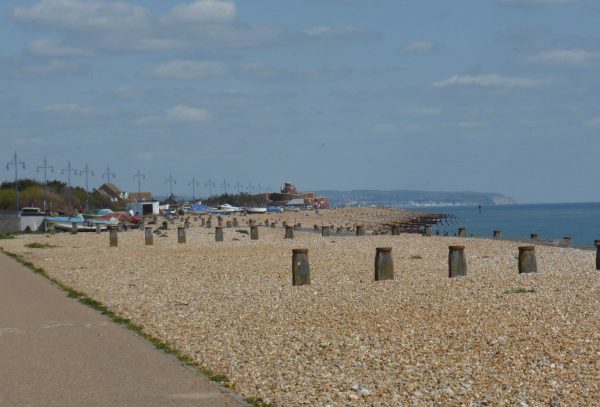 The route is very straightforward and we follow the path alongside the shingle beach.  It is a sunny afternoon and very pleasant out of the wind, but anywhere not protected from the breeze is a bit chilly.  On the tarmac path we move along at a reasonable pace and soon reach Langley Point, the entrance to Sovereign Harbour, here is Martello Tower number 66. Originally built to defend an invasion during the Napoleonic Wars, this tower was also used during World War II when an additional gun emplacement was built on the top. 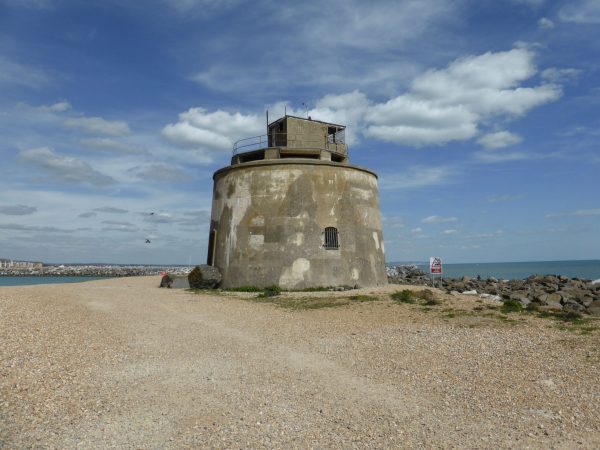 We now head to Sovereign Harbour; this opened in 1993 and now has 3,500 homes within the complex and a network of four marinas behind the huge double sea locks. 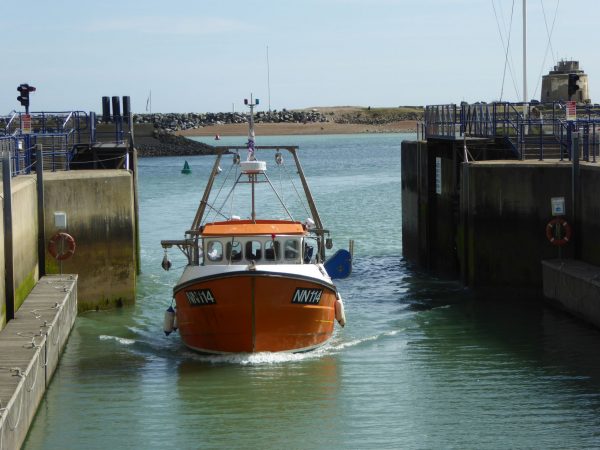 We take advantage of a free bench between the locks and sit down for a bit of refreshment whilst watching life go by  in the marina.  I am not one for the water and cannot see the attraction, but I suppose it must be like waterborne caravanning 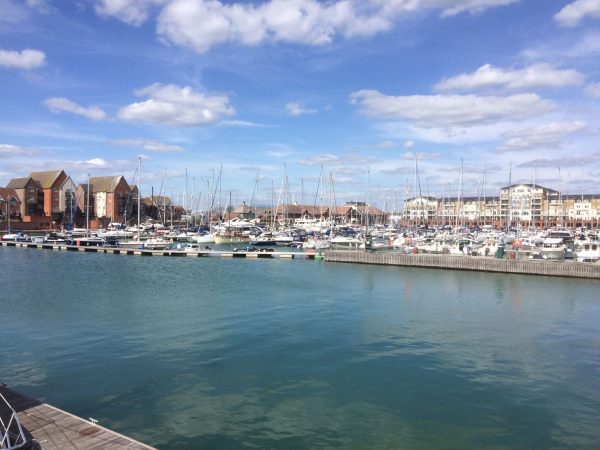 Resuming our walk we continue on the path as it heads around the outer harbour and then as we round the corner we arrive at another Martello Tower, this one is number 64. 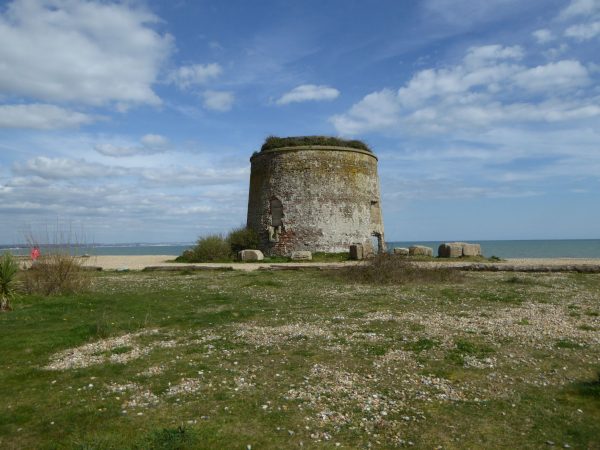 The route soon leads us onto the shingle bank above the beach and very soon we reach yet another Martello Tower, number 60, this one looks to have had some work done on it to turn it into a property, the result is not exactly a grand design look. 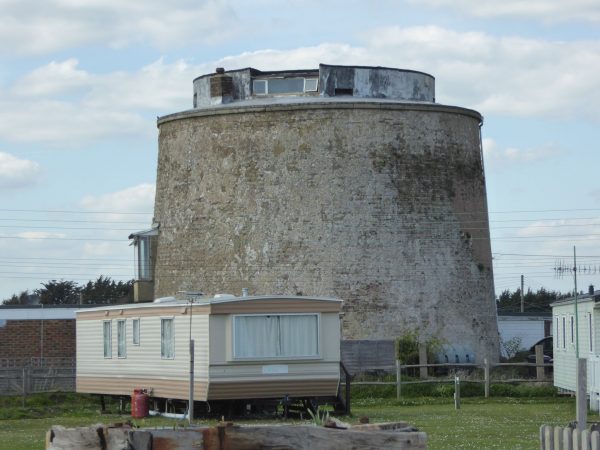 Walking along the shingle beach is slow progress, initially there was a firm track but the shingle soon became deeper and it is hard going – good for the calves!  The sun is still shining, but there is a stiff breeze so we try to keep up a steady pace.  It is interesting to see the many varied beachfront properties; some look neglected like they have had no work done for fifty years whilst others have been given a full makeover.  I can see the attraction of living by the sea, but I am not sure this is a spot I would choose. 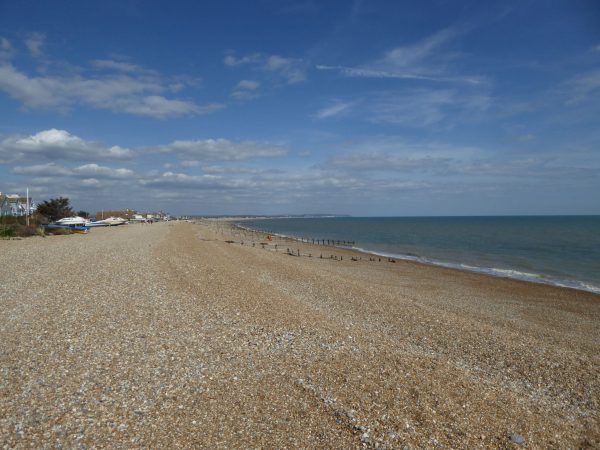 As we head towards Normans Bay we decide to take a brief break from the shingle and walk along the road, the other side of the houses.  This offers some shelter from the wind and it is pleasantly warm.  On reaching Normans Bay Caravan and Camping Club site we return to the beach to walk a few hundred yards along the shingle to reach Martello Tower, number 55. 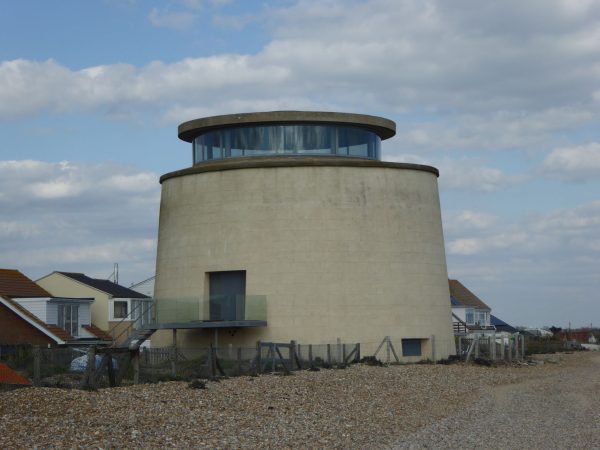 According to news reports this tower was sold at auction in a derelict state in 2014 for £285,000 far exceeding the expected value of £130,00.  Someone has obviously spent a lot of money on refurbishing it and I would imagine that it would command a high price now.  We have covered just over five miles so this seems like a good place to turn around and head back.

Our return journey is made much easier as the tide is now out and we can walk along the firm sand below the shingle bank. 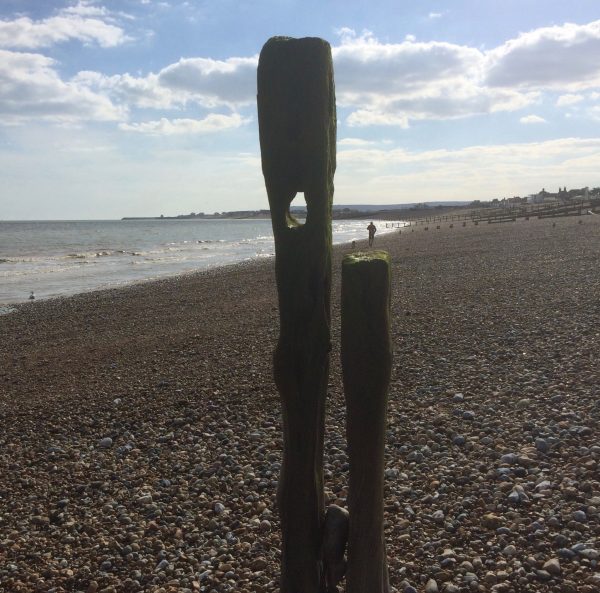 The only obstacle to our journey is having to negotiate the occasional groyne, but these do provide Lynnie with ample scope for photo opportunities. 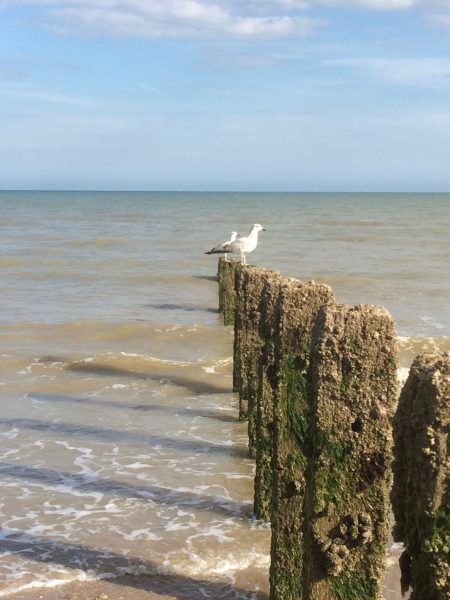 On the firmer ground we make good progress and it is not too long before we are back at Sovereign Harbour.  The RNLI lifeboat occupies one of the sea locks.  Apparently this is done so that it can be quickly launched at low tide. 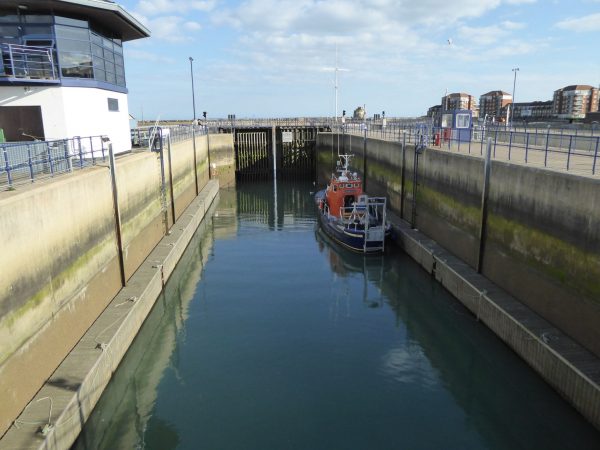 We explore the marina area a bit before heading back to the car.  We have covered ten and a half miles and back in the shelter of Eastbourne it is warm in the sunshine.  Apparently warm enough to justify Lynnie sampling another ice cream from Fusciardi’s. 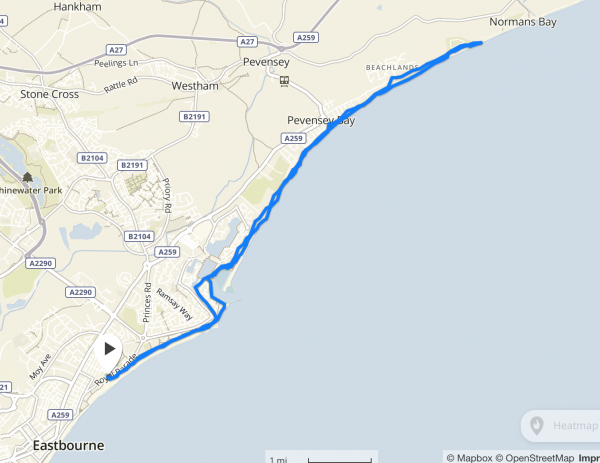