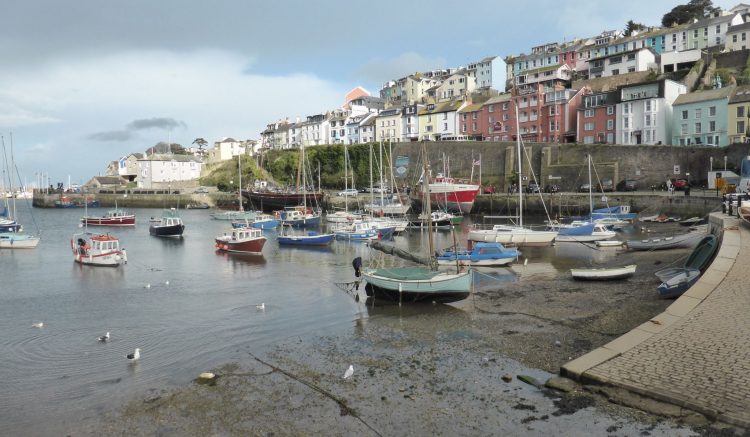 The wind certainly blew last night as forecast, I am not sure what speed it reached but the forecasted 45mph was for Brixham at the bottom of the hill.  Some of the gusts we encountered had the van rocking and Lynnie decided to stay up until the early hours in the belief that if she kept looking at the awning it would stay up.  I was more confident having pegged it down tight so managed a reasonable nights sleep.

Our wander today is from Hillhead into Brixham so we can colour in another section on the map showing the parts of Britain’s coastline we have walked.  There is of course the caveat that I am not going to get too close to the edge!

Leaving Hillhead Caravan Club site we turn right following the footpath into Hillhead and then immediately turn right to follow the path down Penhill Lane.  This soon becomes a steep descent and halfway down we meet a couple coming up.  They warn us that one of the footpaths ahead is closed for tree felling.

At the bottom of the hill we turn left along Mill Lane, soon this track starts to climb and we get glimpses of the sea at Man Sands. 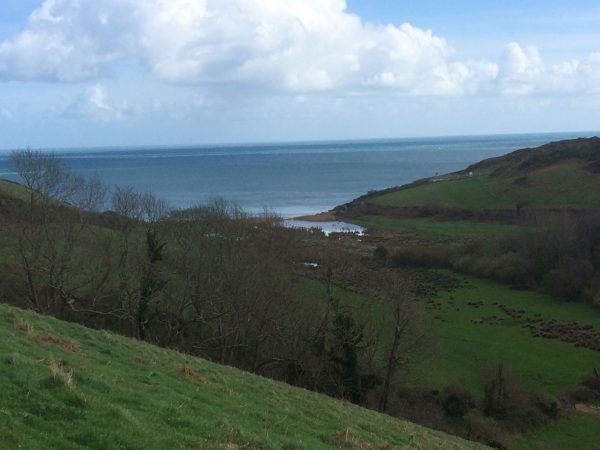 At a junction of paths we turn left up Mansands Lane, at the top of the hill we realise this is the section of path that was closed, but it appears open now and there is no sign of activity so presumably the work has been completed.  At a crossroads of tracks we turn right down Yards Lane and follow this downhill taking a right fork where it divides.  This brings us to a minor road and we turn right and follow this towards the coast at Sharkham Point. 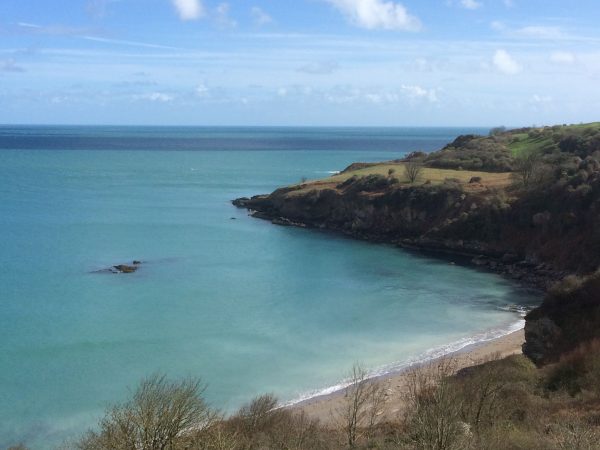 At the end of the lane we turn left to pick up the coastal path heading towards Brixham and we soon reach a wooden sculpture looking out to sea at St Mary’s Bay. 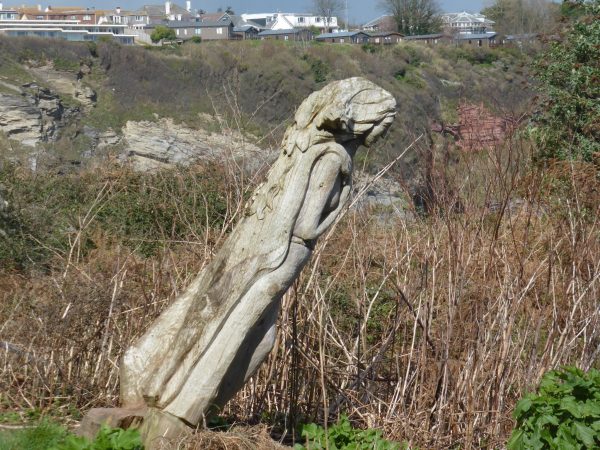 We are close to the edge of the world here and it is a test of my nerve.  I am reasonably comfortable on the sections where there is fencing or bushes but the open sections have my heart pounding and knees trembling.  We turn a corner and the path heads straight towards the edge and no matter how hard I try my legs won’t move forward I seem to be stuck in reverse! 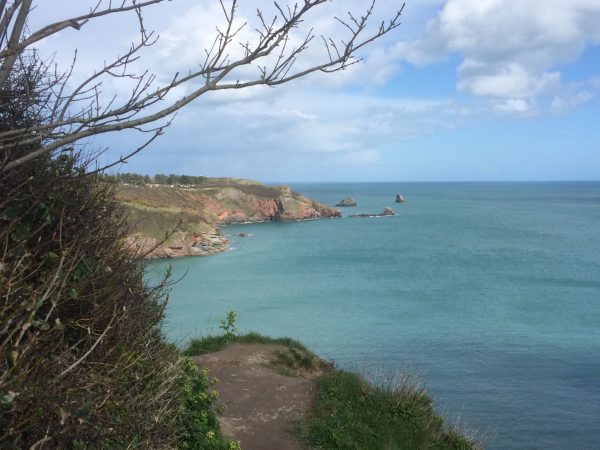 Lynnie goes on to look at the view whilst I try to recover my composure and check the map for an alternative route.  I am left standing for an age and start to worry that Lynnie has fallen off.  How long do I leave it before I call the coastguard? I can’t go and look and if she has fallen off I am sure to be interviewed by the police who will want to be certain that I didn’t give her a shove!  Have I been planning the perfect crime all these years by pretending that I was afraid of heights?  Would I be locked away for the rest of my life for a crime that I did not (and could not commit)!  Finally Lynnie returns and I am overwhelmed with relief, both pleased at the return of my beloved and remaining a free man!

Prior to our encounter with the edge of the world we had passed a path leading inland.  We head back to join it and go through a kissing gate.  Or to be more accurate, due to my relief at Lynnie’s safe return, a snogging gate, (a disgusting activity for a couple of our advanced years!).

There are so many paths around here that there is no need for me to describe a route.  We make for Berry Head, passing a large holiday village.  We soon reach the fort at Berry Head.  It was built in the late 1700’s to protect Torbay from invasion by Napoleon’s French armies. 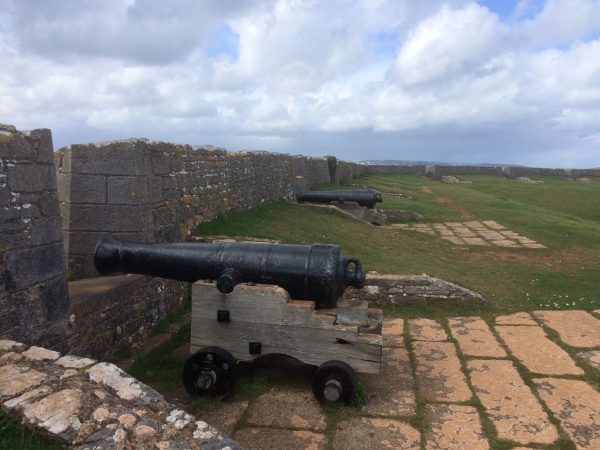 There are significant drops on three sides so it was a good spot to build a defensive fort. But not a place where I feel comfortable looking over the sides! 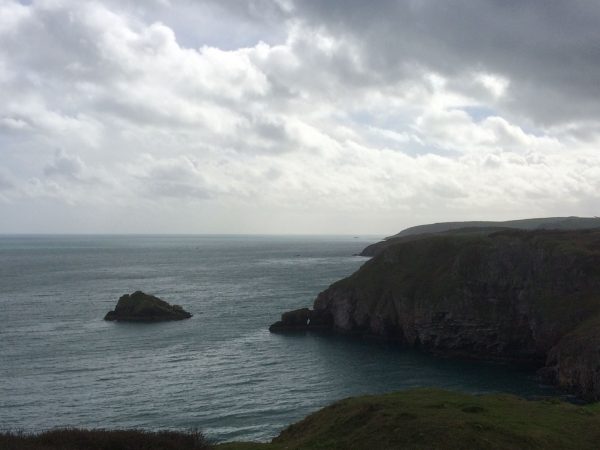 From the fort we follow a path that soon descends to join a minor road, as we follow this there are emerging views over Torbay where trawlers are busy at work. 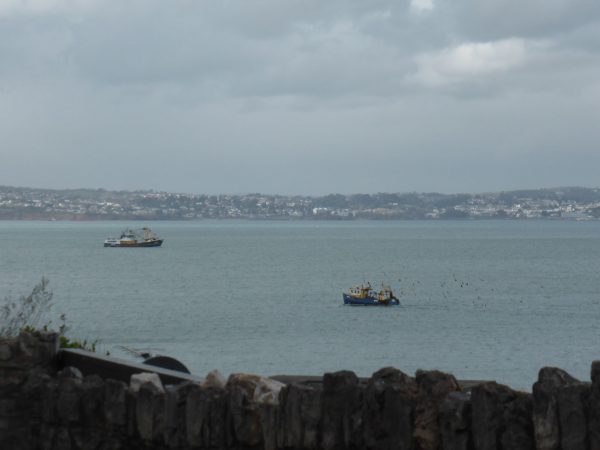 This route leads us down to Brixham Harbour.  We came here many years ago when Ben and Lolly were small and it is a spot that I visited in my childhood.  On both occasions we fished with crab lines from the harbour, a pastime I am sure Dexter and Crosby would like to engage in but today they focus on trying to snare a discarded chip or two. 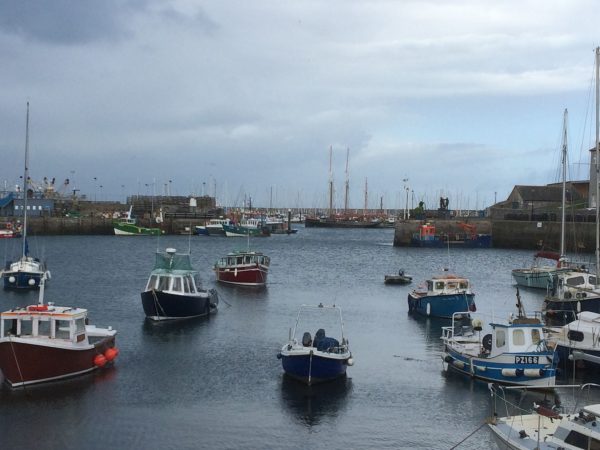 Brixham Harbour is all you would expect of a traditional fishing port.  It was something like this, but on a grander scale, that Lynnie anticipated a few years ago when she suggested we visit Grimsby, a memory I am still trying to erase.  In the height of summer this harbour is heaving, but in late March it is a very pleasant spot to visit. 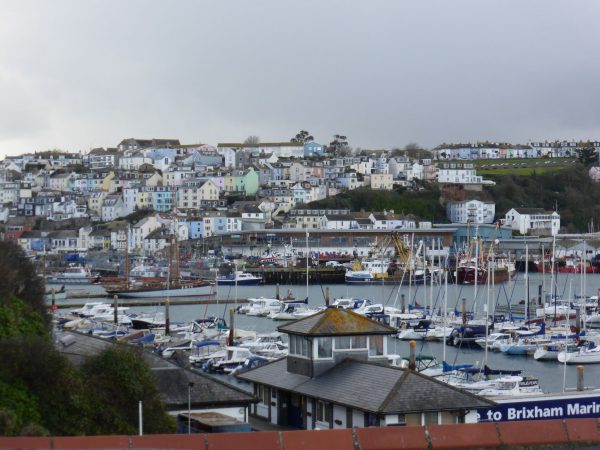 We are briefly entertained by schoolchildren as they float by, it was never part of my school curriculum to sail, paddle or row a boat.  Perhaps if it was I would be less concerned about stepping off of dry land. 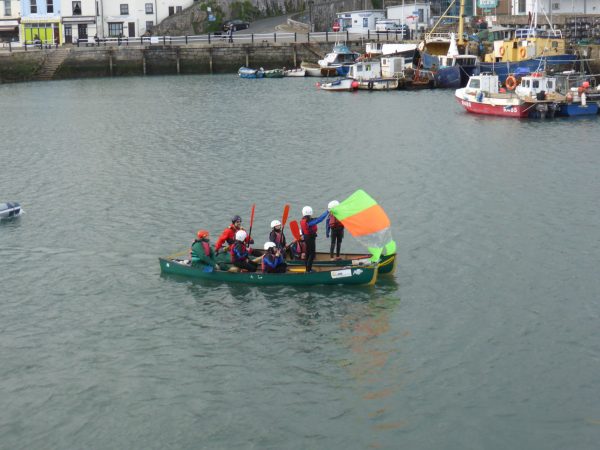 A landmark of the harbour is a full sized replica of the Golden Hind.  Sir Francis Drake sailed the original around the world from 1577 to 1580 and in so doing became the first ship to achieve this feat.  A replica has been located in the harbour for over fifty years (I went on board as a nipper), this is the second replica, apparently the original sunk in 1987 whilst being towed to Dartmouth for repairs. 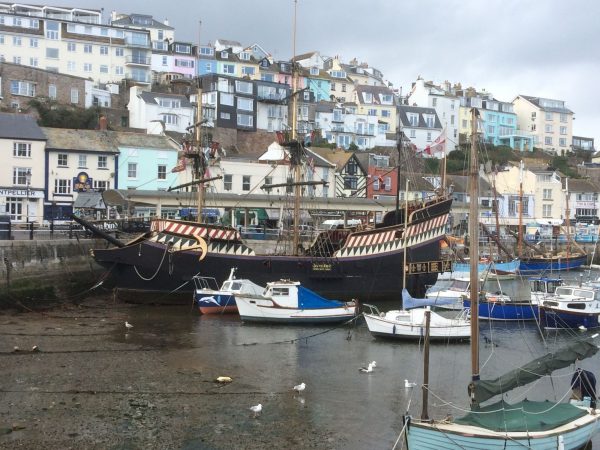 On 5th November 1688 Prince William of Orange (later to be known as King William III) landed his fleet at Brixham and according to the transcript on the plinth of his statue declared “The liberties of England and the protestant religion I will maintain”.   The statue was erected by public subscription and unveiled on 5th November 1889. 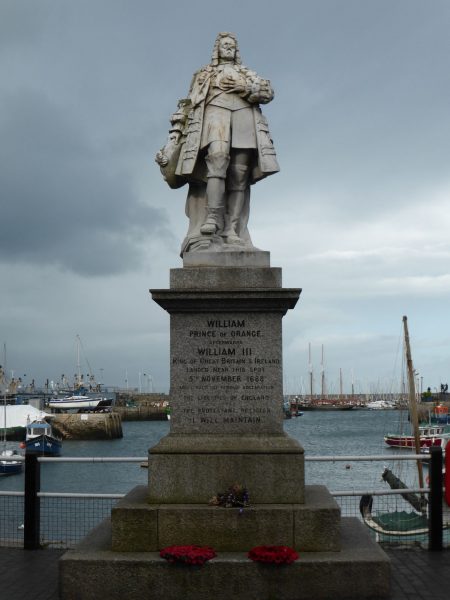 We wander further around the harbour where I spot a plaque tucked away amongst the oyster pots.  The summary of this transcript is that Prince William (later to become King William IV) on the occasion of his visit to Brixham on 21st July 1828 stepped on arrival onto the same stone that William III first stepped on when he landed in 1688.  How they knew it to be the same stone is beyond me, but why be cynical when it makes a good story that has lasted almost two hundred years. 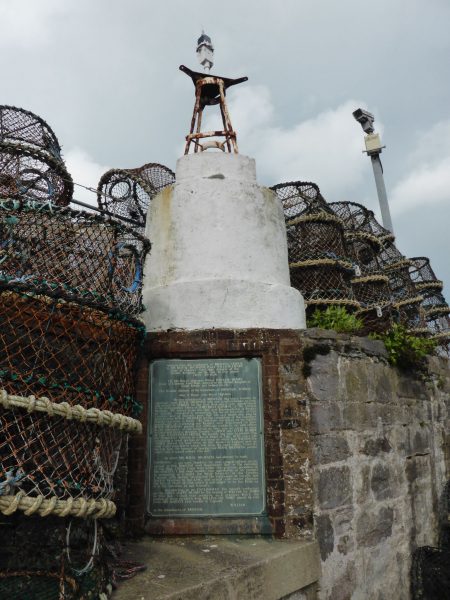 We could spend longer in picturesque Brixham, but we need to start the trek back up the hill towards Hillhead. 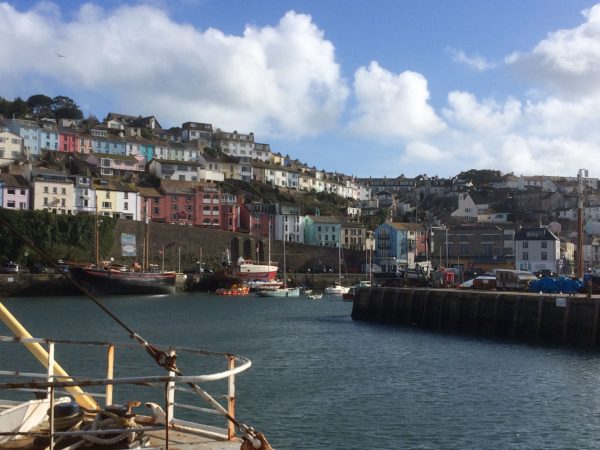 Proceeding out of town along Fore Street we turn left into Bolton Street, which runs into Greenswood Road, then Drew Street and Milton Street.  We turn left to join Southdown Hill.  At the top of the hill we turn right along Challeycroft Lane leading back to the road between Brixham and Hillhead.  After turning left we soon take a footpath on our left that leads through the back of houses and onto a small estate and finally back to the top of Penhill Lane where we started our walk earlier.

Our jam about has covered just over eleven miles.  It has been an interesting walk, parts along the coastal path I do not wish to repeat but Brixham is a town I will return to and explore in more depth.  We are back in time to check the pegs are secure on the awning, for we are promised another rough night! 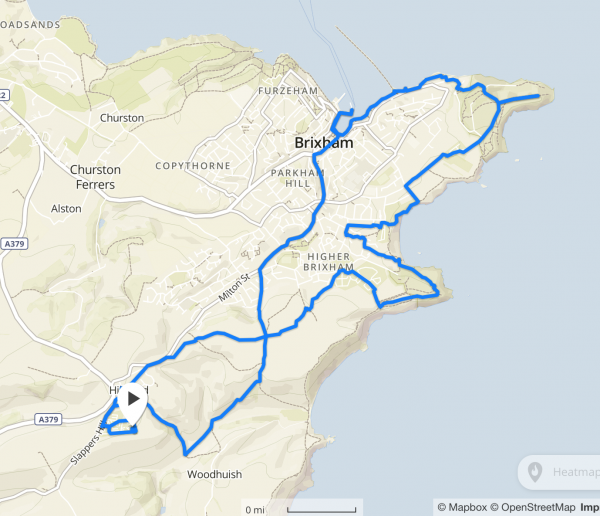