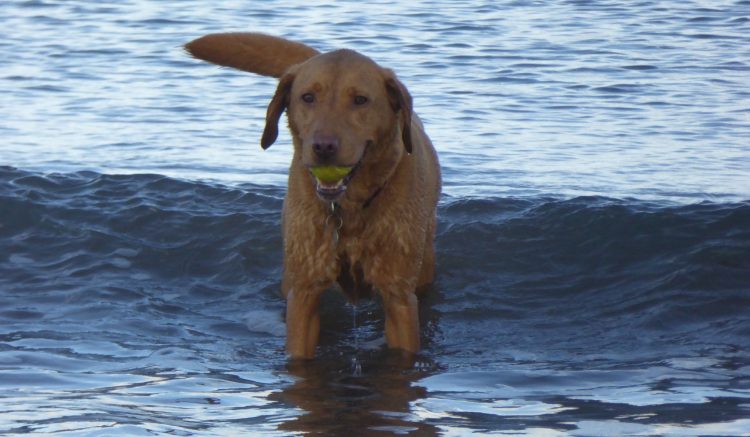 Yesterday was a moving day and the first time we have taken down our new awning.  A number of our winter hours were taken up with awning discussions.  The air awning we purchased last year turned out not to be such a great buy; it lasted just 118 nights, during which time we had three new tubes! Apparently, according to the manufacturer, we had used it too much!

I had a very frustrating and fruitless discussion with the Managing Director of the Company, whose name appears on the awning, and I think he may have attended a Kim Jung-il customer service seminar.  But thanks to the great service of our dealer, Tilshead Caravans, we ended up with a new awning at an acceptable price.  I will not name the awning manufacturer, but any sharp-eyed blog followers will know of whom I write.  They also manufactured the new awning and when we visited their stand at the NEC Caravan and Camping Show a few weeks ago we were assured this awning would last years, even with our level of usage.  I will be quick to tell all and sundry if it does not!

Anyway, our new awning looks substantial and has coped with six days of Dartmoor weather, it was damp when we took it down yesterday morning but it was back up within two hours.  Our new site, Hillhead Caravan and Motorhome Club Site, is between Brixham and Dartmouth on the South Devon coast.  On arrival the wind was blowing and on asking where the most sheltered area was we were told that it always blows on this site!  Putting up the awning we soon realised the truth of this when the awning was dry before it was pegged down.

Our walk today starts from a large car park by the beach at Broadsands, just a short drive from Hillhead, it appears popular with dog walkers. 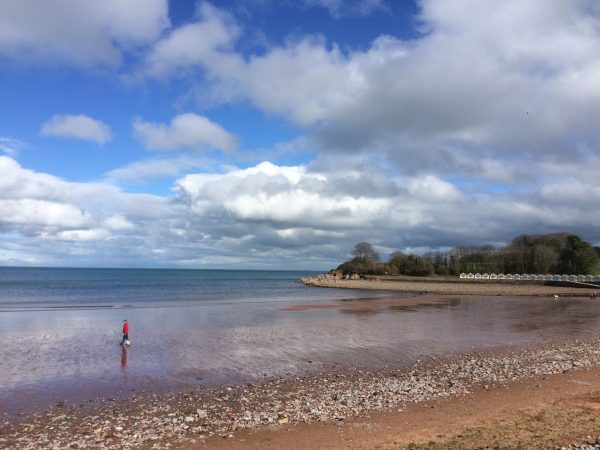 We walk along the promenade in front of neat beach huts and then follow the coastal path as it passes under one of Isambard Kingdom Brunel’s constructions. 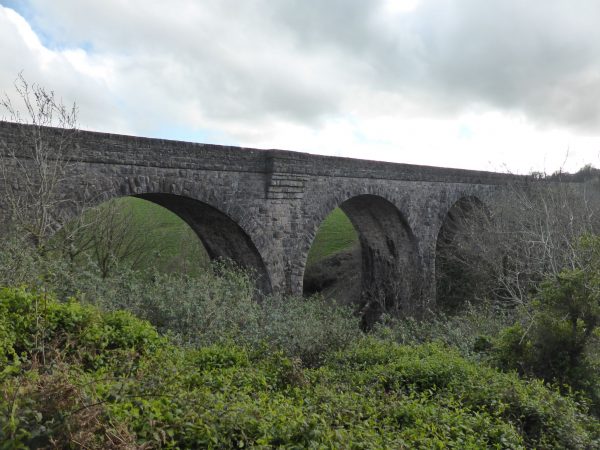 We then turn right following the coastal path as it climbs steeply, affording great views of Broadsands below us. 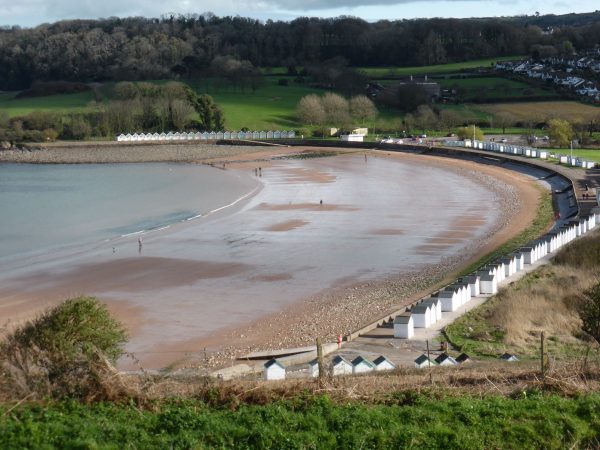 Keeping on the coastal path the next beach we come to is Goodrington Sands, also a beach  popular with dog walkers. The boys are keen to join in but we want to head on a bit further before they run around. 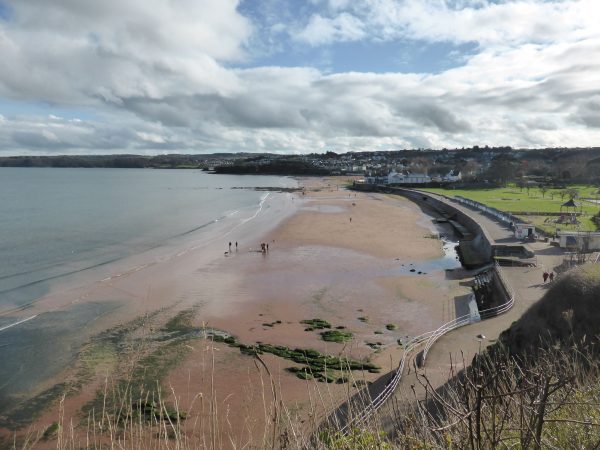 The coastal path now takes us around Roundham Head before dropping down to the quaint harbour at Paignton. 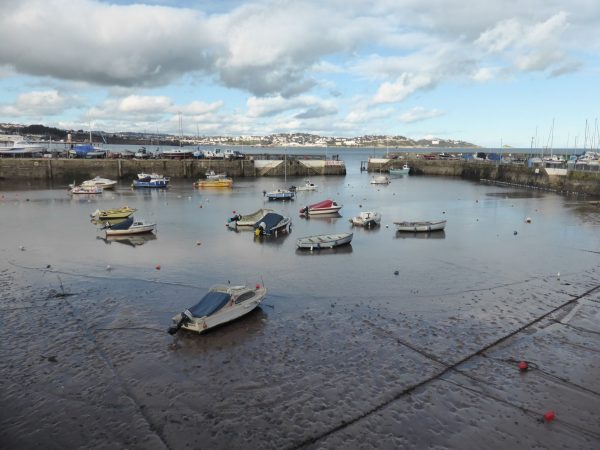 This is a delightful spot; through an alleyway we arrive at a seafront thatched cottage. 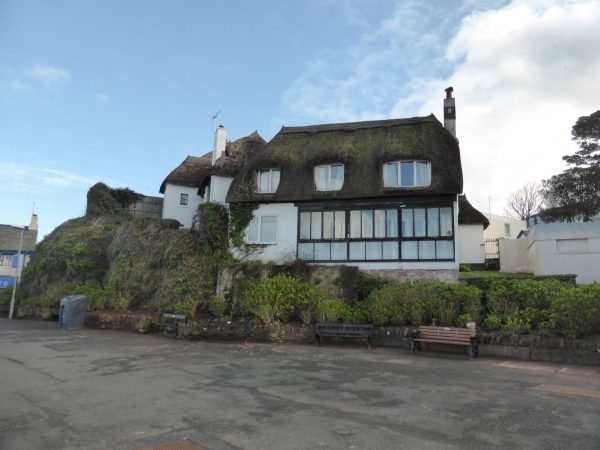 Almost next door is The Paignton Club, the blue plaque outside says that the building was purpose built for the Club and opened on 22nd December 1884, (just in time for a Christmas party) and has been run continuously ever since.  Perhaps in 1884 the view of Paignton seafront was better, personally I would have built it overlooking the harbour. 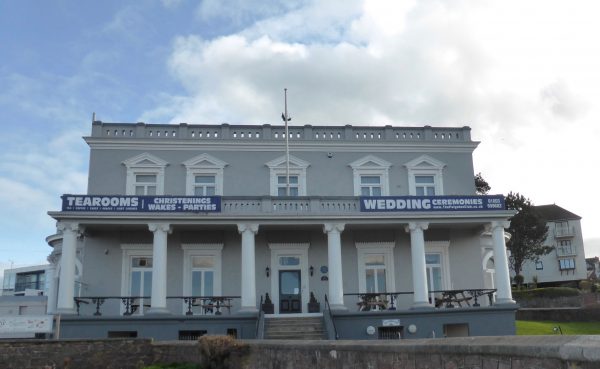 We are now by the beach and the boys are eager to feel the sand between their toes. 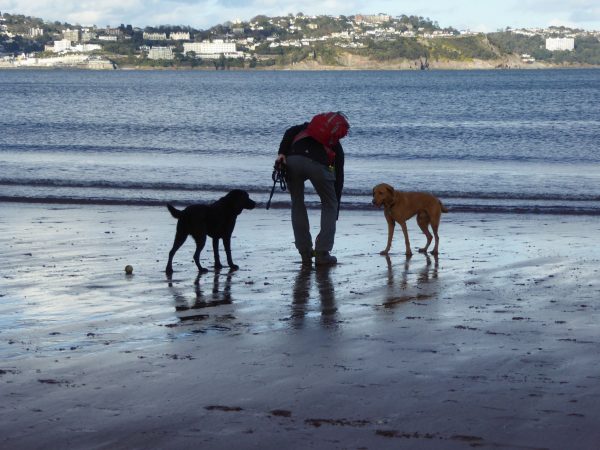 Being on a beach is a real treat for the dogs.  Dexter just loves to chase after a tennis ball. 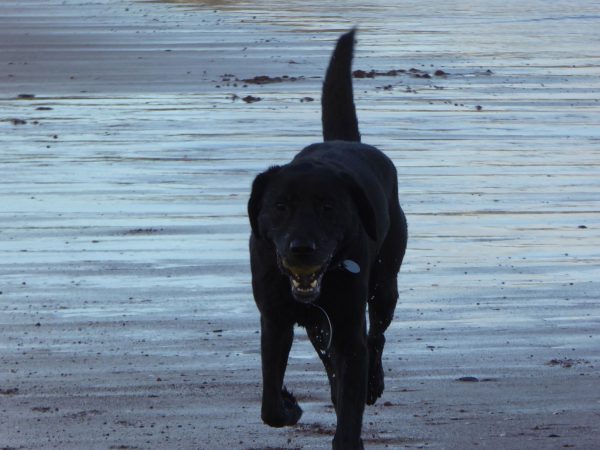 Whilst Crosby likes to paddle and chase a ball. 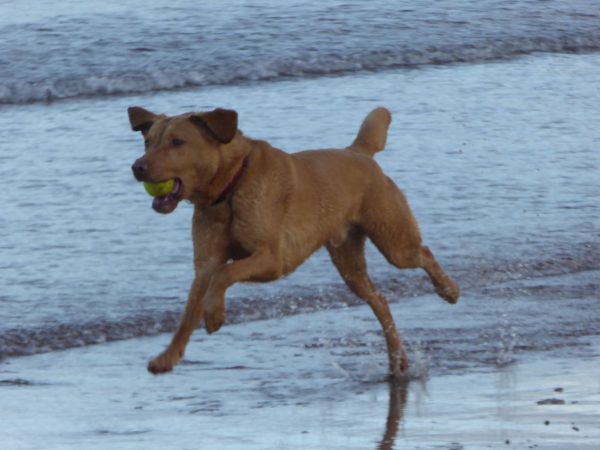 Along the beach is Paignton pier, this opened in June 1879 and in 1881 the pier head was enlarged and a billiard room was added.  The construction of the pier was financed by a local barrister Arthur Denby.  After Denby died the Devon Dock, Pier and Steamship Company took over the pier and used it as a stopping point for the paddle steamers that travelled between Brixham and Torquay. 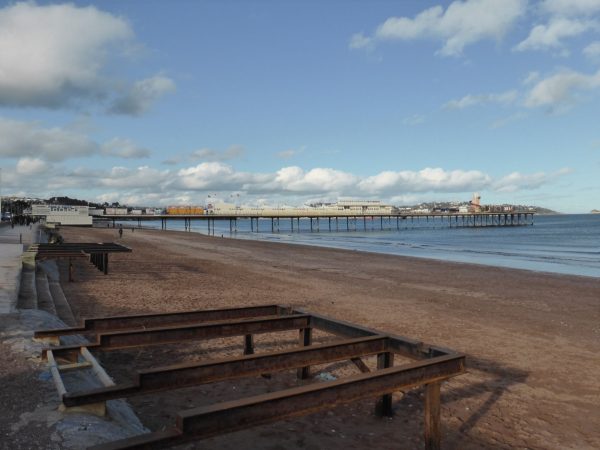 In 1891 the pier head was destroyed by fire.  This section was not replaced and in World War II, like most piers along this coast it was requisitioned by the military.  At the end of the war it was repaired.

We have seen a number of piers on our travels, but nothing quite like this.  Our most recent excursions along piers in Hastings and Worthing were a real pleasure.  Whereas Paignton Pier, I am sure is described as a pleasure pier, I think this should be translated as shitehole.  There is no escaping the fact that it is a stunning structure, but for some bizarre reason it is packed (and I mean packed) with what are mistakenly called amusements.  Though originally said in different circumstances I think as Queen Victoria put it  “we are not amused!’’ we are definitely not.

Coming off the pier I offer Lynnie an ice cream.  Whilst she contemplates the selection I watch the assistant, who has clearly run out of tissues, use her hand to wipe her nose and then turn to greet Lynnie with a “what do you want love”.  I was about to say “Influenza and flake please” but better judgment kicked in and we informed her we had decided it was too cold for ice cream.

Our walk continues along the seafront onto Preston Sands, on reaching the far end of this stretch of beach we turn around and walk back along Paignton seafront.  There are signs of a more splendid past, but I get the feeling that at some time in the past Paignton, mistakenly, thought it would be sensible the try and emulate the likes of Blackpool and failed.  Now it is the poor cousin to the quaint harbour of Brixham and the more upmarket Torbay. 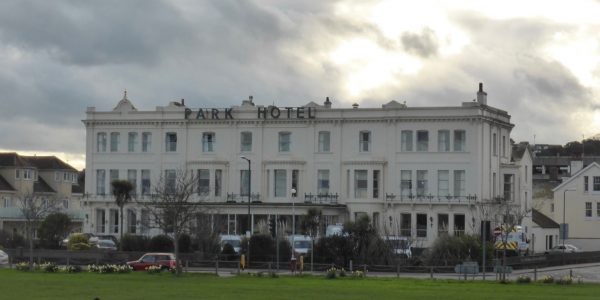 We return to the car back along the coastal path. If leaving Paignton was not pleasurable enough, along the way we are treated to signs that spring is clearly on the way. 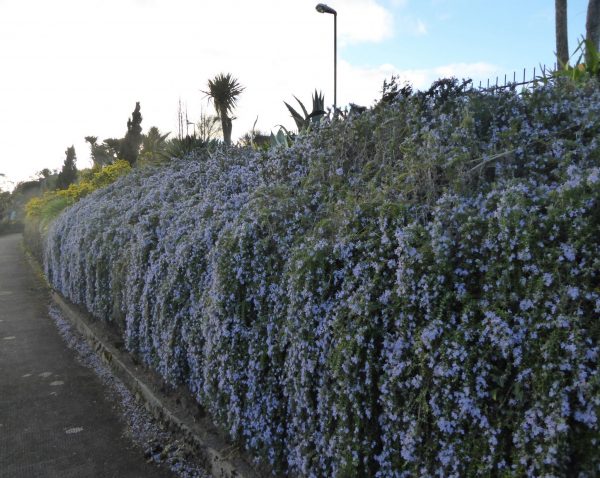 Soon we are back above the coastline between Goodrington Sands and Broadsands, it looks cracking in the early spring sunshine. 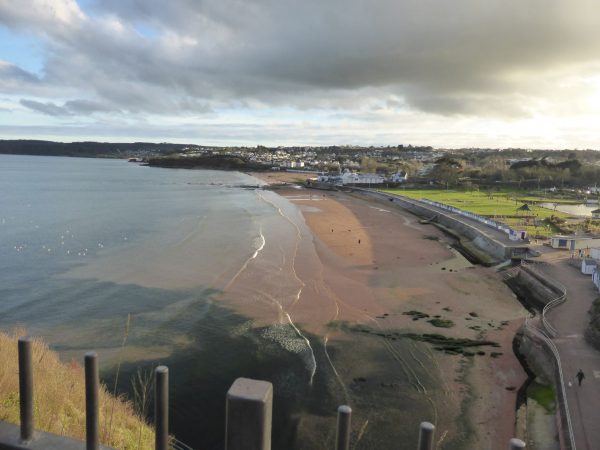 When we reach Broadsands the tide is out and with the sun setting it is a wonderful spot. 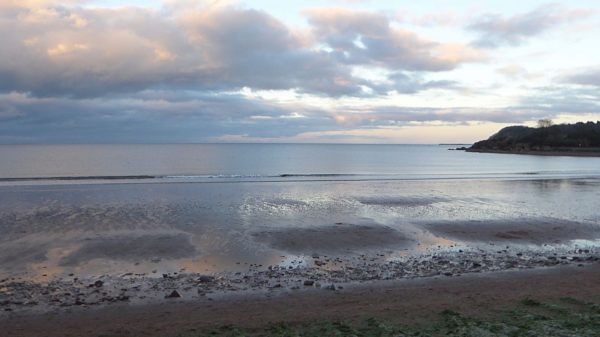 Our walk has covered seven miles, although the hills have made it feel a lot further.  The weather forecast is for winds over forty miles an hour tonight so it is time to head back to check that the pegs on the awning are secure! 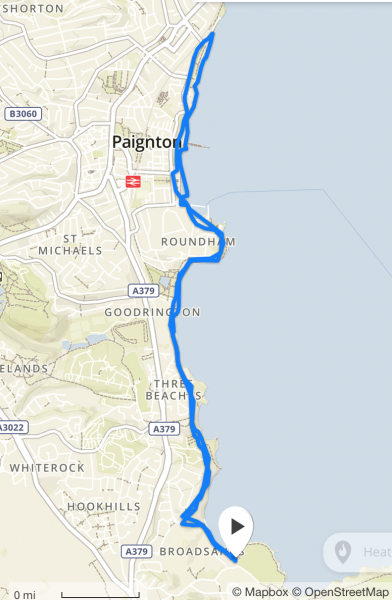