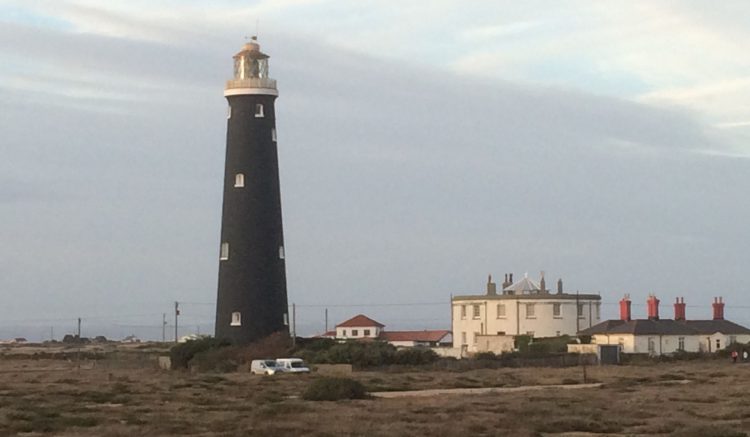 After two days exploring Romney Marsh on foot from Bellfield Farm CL it is time for us to hop into the car and explore further afield.  Our plan today is a walk that takes in Dungeness.

Looking at the OS map it is not the most enticing part of the country; featuring a large MOD live ammunition firing range besides, which is a nuclear power station.  However, previous visits to areas near nuclear power stations have proved wonderful.  One of our favourite walking locations is the Quantock Hills close to Hinkley Point.  We had a wonderful afternoon visiting Sambo’s Grave on the sands at Heysham in the shadow of a nuclear reactor and were once at the beautiful Minsmere Nature Reserve, that has Sizewell as its neighbour, when Springwatch were recording.

The starting point for our walk is the centre of Lydd.  We park close to the impressive All Saints’ Church and wander through the town.  Our progress is hampered by Dexter who appears to be carrying a limp. We are not sure if this is a wise old dog suggesting that covering over thirty miles in the last two days is enough, or if he has an injury.  We watch him carefully, but as soon as we reach grass in a park he is trotting along.

We head south out of Lydd on the Dengemarsh Road, the first part of the walk passes an industrial estate with the power station and power lines dominating the view ahead.  I am beginning to wonder if it was a good idea to come here! 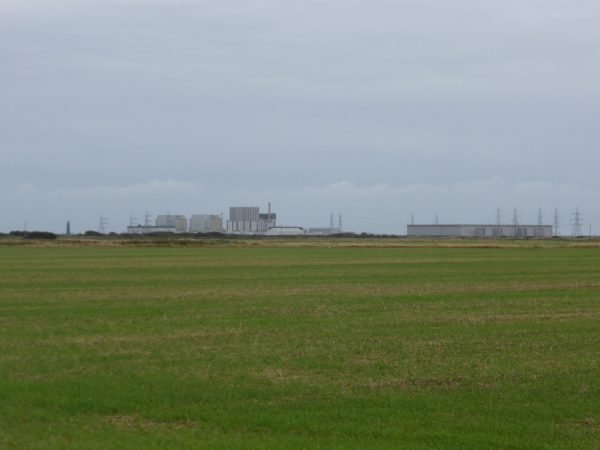 After three quarters of a mile we take a footpath on the left heading towards Dungeness Nature Reserve.  After crossing a couple of fields we are in amongst the old gravel pits that form a major part of the four square miles RSPB nature reserve. 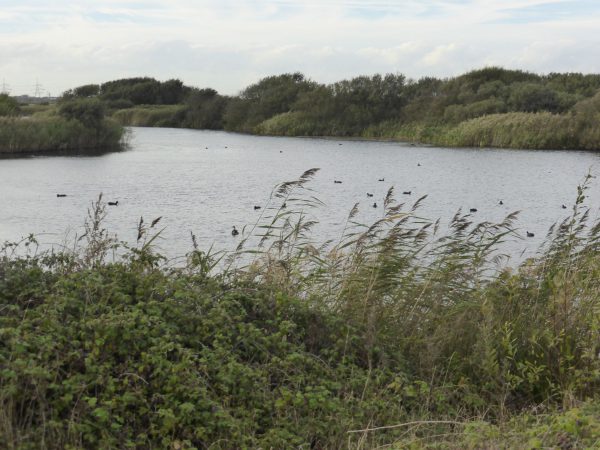 We are chatting away and following footpath signs without referring to our map and suddenly realise that we are going to be on the west rather than the east side of the power station as planned.  No need to worry it is interesting looking at all the birds, but slightly disconcerting to discover we can name so few. 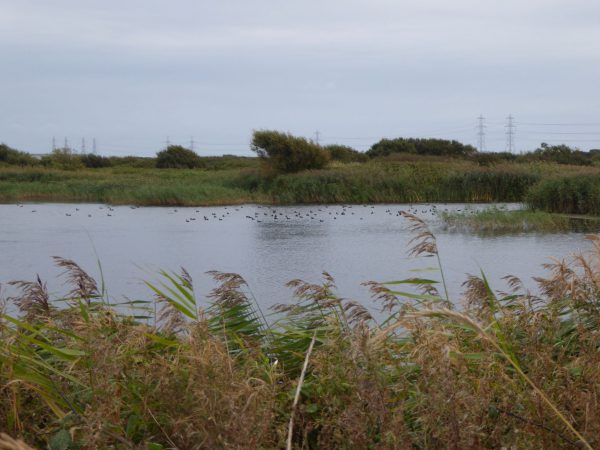 The path we are on leads to a track continuing on from where Dengemarsh Road ends.  We have walked a long way to reach a point less than a mile from where we left the road earlier. Luckily it has been worthwhile; we turn left with the warning signs for the firing range on our right.

There is a footpath leading through the firing range only accessible if a red light is not showing.  It is not our intended route, but we spend time debating if the light is showing or not.  We are unable to make up our minds and decide we would be very wary of venturing onto the ranges. 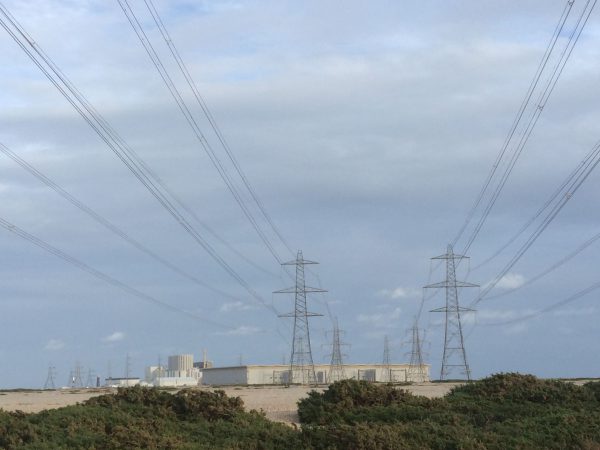 We are soon on a huge shingle bank.  It is amazing! 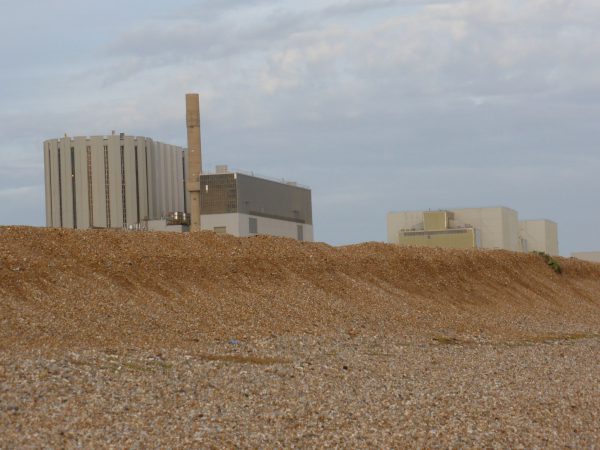 We turn left heading below the power station; we walk for about a mile and a half on the shingle.  Normally we cover this sort of distance in less than thirty minutes, it takes us slightly longer today; trying to maintain a pace on the shingle is incredibly hard going on the legs.

All the while we are walking there is the brooding presence of the power station dominating the landscape.  I always feel nervous when close to these things, but in reality if it went wrong at least half of England would be affected, so being underneath it might be a quick release.

Dungeness Nuclear Power Station is technically two stations. Dungeness A was connected to the National Grid in 1965, but ceased operation in December 2006.  Defueling has been completed and the turbine hall demolished and in 2027 it will then enter the “care and decommissioning” stage.  I trust any work on a nuclear power station to be a permanent “care stage”!

Dungeness B began operating in 1985; in 2009 serious problems resulted in the reactor being shut down for eighteen months.  It was due to be cease operating in 2018, but apparently a new computer in the control room and improved flood defences mean it can continue until 2028.

Along the beach we spot a frenzy of activity just off the shoreline.  There is a huge flock of gulls feeding in the water, which appears to be bubbling.  We assume it is the outlet pipe pumping hot water into the sea, attracting fish that are then catching the attention of the gulls.  It is a fascinating sight. 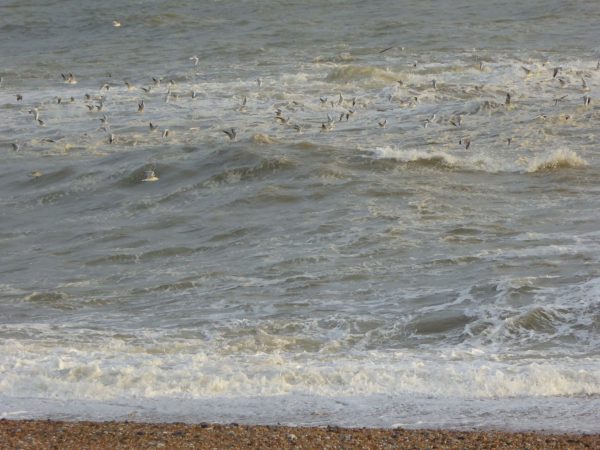 After the power station we reach the interesting settlement of Dungeness, I was not sure what to expect, but it certainly was not this.  The place is packed with interesting historical sites and has a strange feel to it.

The first thing we look at is the Old Lighthouse which opened in 1904 and continued until decommissioned in 1960 due to the neighbouring Power Station blocking it’s light from shipping approaching from the south west.  It was then painted black to avoid confusion with the new lighthouse just a bit further along the beach. 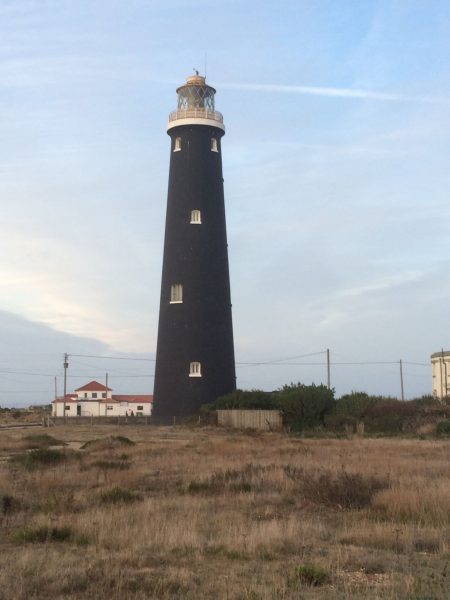 The next thing we come to, along the road we are now on, is known as the Wireless Shed.  Apparently in the 1890’s the inventor of radio, Guglielmo Marconi, conducted tests from here whilst researching the transmitting of messages without connecting wires.  It is such a historic location, yet is in total disrepair and does not appear to be marked in anyway. 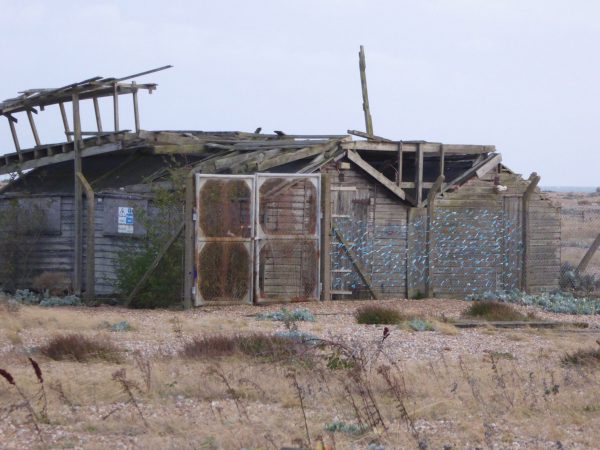 Next up is the new lighthouse, some 500 yards from the old lighthouse.  It is the fifth lighthouse to have been built on Dungeness and started operating in November 1961.  I can’t profess to know a lot about lighthouses, but these are both stunning buildings, although I imagine those at sea are only concerned with the quality of light emitted rather than the architectural merits of the construction. 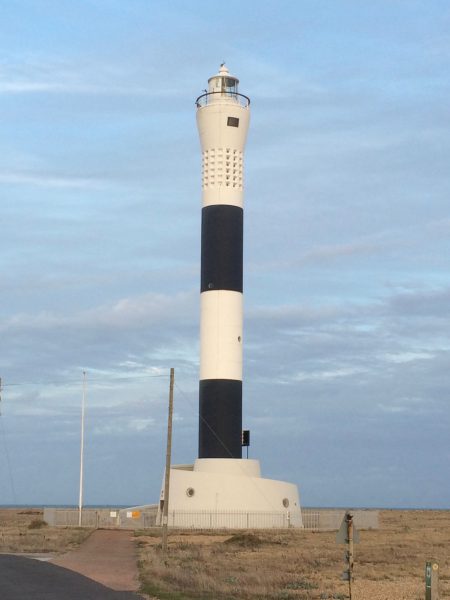 It is only now that we register that our meandering has covered six miles and left us with four and a half miles back to the car, this is not normally a problem.  However, it is late September and the nights are drawing in leaving at best 30 minutes before nightfall.  Thankfully I always carry a torch in my rucksack so we are not overly concerned but decide not to dilly or dally along the way.

Following the road away from the lighthouse we set a fast pace only stopping briefly to look at two old Tanning Coppers. 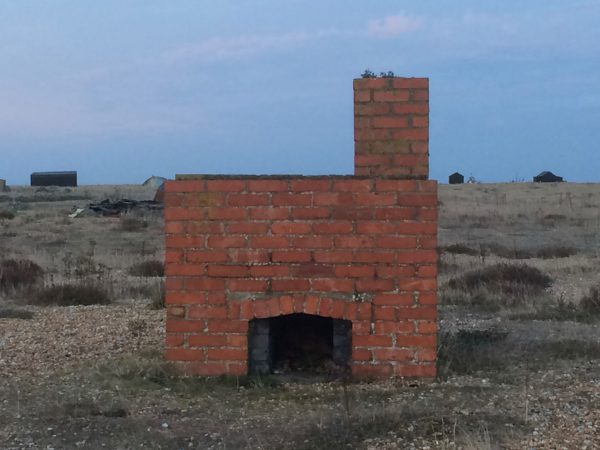 On the second there is a helpful description of their purpose stating, “Beach Coppers were used for dying and preserving fishing nets and clothing such as overalls.  The big circular copper tubs were filled with water and a fire lit underneath.  A lump of Kutch (a resin from Burma) was placed in a basket above the water and slowly dissolved. When the water stained to a dark brown the brew was ready and nets and clothes used for a day’s fishing were soaked for preservation against the ravages of the seawater.  The nets would be used for the days fishing and then dried and then dried out to set the dye for the next trip.”  This copper was built in 1910 and is now owned by the granddaughter of the original owner. 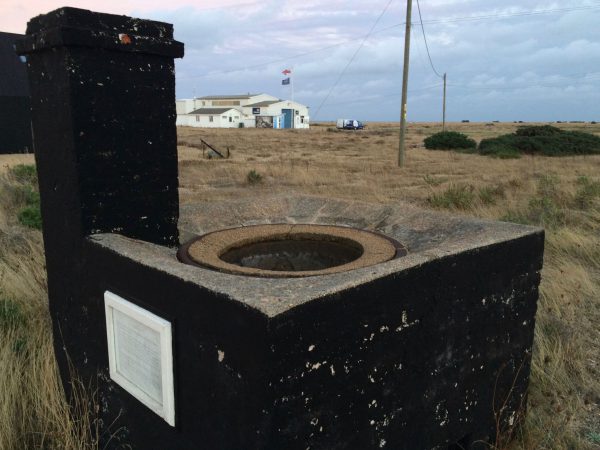 There is so much more to see here, but with the light fading we decide that another visit in a few days time is required to really do justice to this wonderful location.  We have now reached the Dungeness Road that goes to Lydd.  It is three and a half miles; the first mile is managed in the dusk with an amazing sunset behind the power station that slows us slightly as we pause to admire it. 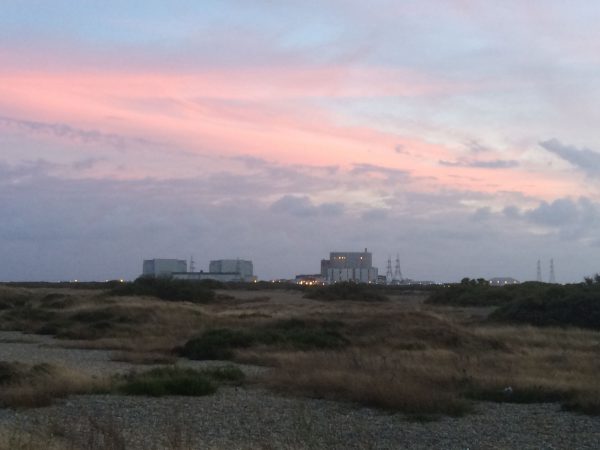 We soon discern that the work shift must be changing as the power station.  There is suddenly an increase in traffic leaving the site and we are grateful for our torches.  It has become very dark.  I know it always gets dark at night, but some nights are darker than others, and this is a dark one.

Eventually we reach the outskirts of Lydd and gratefully street lighting.  Despite misjudging both the distance and time it would take us, we have thoroughly enjoyed our walk of ten and a half miles.  Dexter, who limped the first quarter of a mile has trotted along ever since.  Obviously he was trying to pull a fast one!