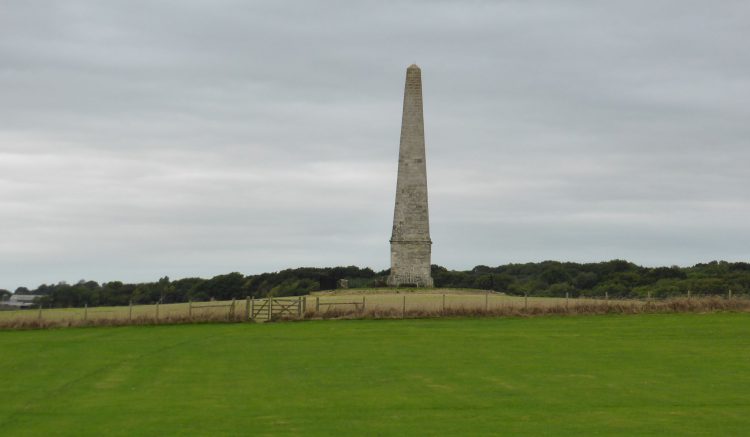 One of the pleasures of travelling as we do is the ability to explore a small area of the country in some detail. I like days where we don’t use the car this enables us to really get a feel for an area and has the advantage of no traffic. Today’s exploration is from Bellfield Farm CL and from a look at the map does not look too challenging. There are no hills in this part of the country.

Leaving the site we turn right and within a couple of hundred yards right again to take the lane towards Bonnington, after about half a mile, at a junction, we continue on heading towards St Rumwold’s Church which can be seen in the distance.

About a mile later we cross the Royal Military Canal and walk up to St Rumwold’s Church. Rumwold was a 7th century saint. Apparently he was born in 662 and lived for only three days, he was able to speak from birth, requested baptism and delivered a sermon all in this very short life. The church dedicated to him is appropriately small, it is locked so we cannot venture inside so have to be content with looking at the exterior. 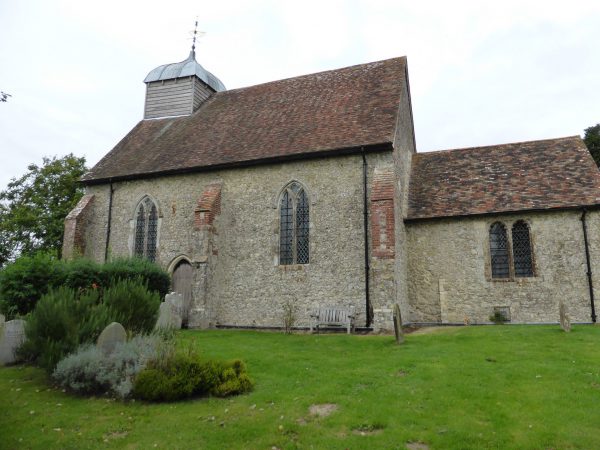 Our walk continues by heading back down to the Royal Military Canal. The canal is dotted with second world war pillboxes, but the canal is far older than that. In the early 1800’s Napoleon showed intent to invade England and Romney Marsh was considered a likely landing spot so thoughts turned to its defence. Originally they believed the Marsh could be quickly flooded, thereby becoming impassable, however, it would take ten days to flood so this was deemed unworkable. 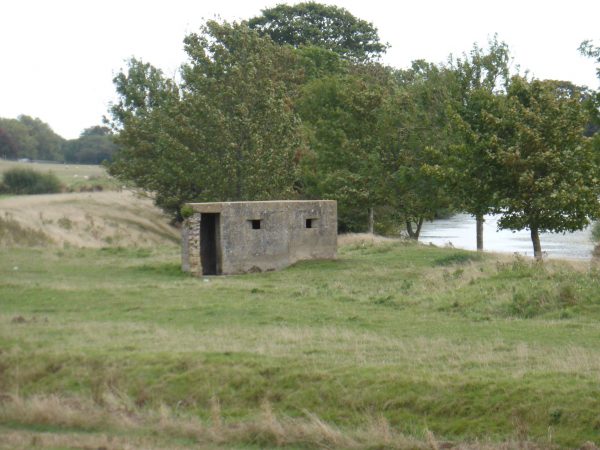 Lt-Col John Brown devised the idea of a canal from Seabrook (near Folkestone) to Rye it would stretch 19 miles and the spoil from the canal would form an embankment on the north side for troops to defend the entry to the rest of the country. Fortunately, the canal was never required for this purpose. We join the footpath that follows the embankment on the north side.

After a mile we reach a road and leave the canal to turn right and walk up the country lane towards Bilsington, after a couple of hundred yards we take a footpath on the right leading to the church of St Peter and St Paul built in the late 13th century. It has an unusual feature; the bell stands outside at ground level. 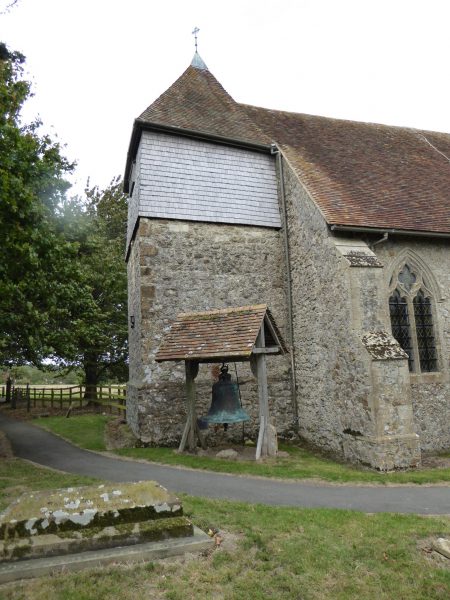 We take it in turns to pop inside to have a look around, heeding the warning to keep the door shut to avoid sheep entering the church. It looks as if there has been a recent project to replace all the hassocks they are colourfully arrayed on the pews, coming in many designs and the result of many hours of work. 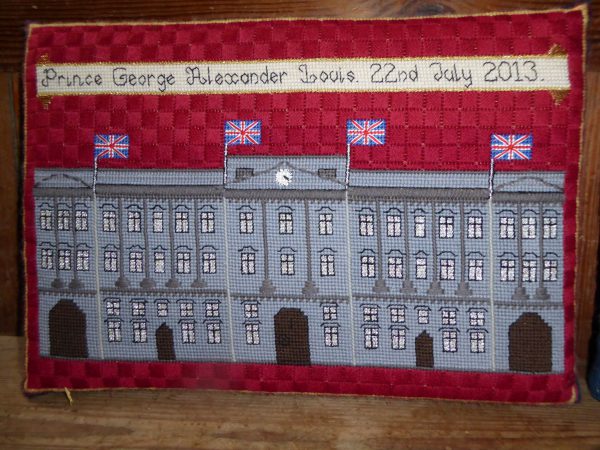 From the church we follow a lane to Bilsington Cricket Ground with the Bilsington Monument standing behind it. This landmark can be seen for miles and visiting it was in our plans for today. We cross the cricket field and follow the path to the monument. Using the monument to protect us from the cool breeze it is an ideal spot to stop for a sandwich. 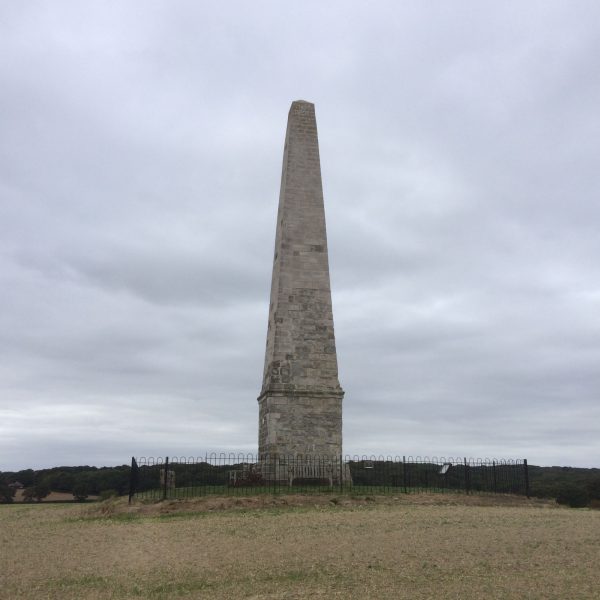 The information boards give plenty of information about William Cosway, a resident of Cheriton, near Folkestone who bought the Bilsington Priory Estate in 1825. On 29th April 1829 he was knighted “ being of late secretary to Vice-Admiral Lord Collingwood”.

He took a great interest in the reform Bill and was said to be an excellent landlord. He was greatly concerned by the distressing conditions of farm labourers who at the time were on wages just above starvation level. As a consequence many were emigrating overseas. In 1830 he lent money to four families from the village to go to America. In 1833 he built a school in the village, but tragedy struck when he was killed in a coaching accident in June 1834. He was fifty-one and destined to become a MP and it sounds like he was a loss to society.

The year after his death the 52-foot monument was erected, it was repaired in 1893 and again in 1948 but then struck by lightening in 1967. The village decided it was not worth repairing, but thankfully a local resident Mary Webb set up a committee in 1996 to save the monument. It was Mary’s father Mr Pratt Boorman that led the restoration in 1948. Interestingly because the monument was such a landmark it was almost removed during World War II.

Our walk continues by heading back across the Cricket Ground and then turning right to follow the road and footpath back down towards the Royal Military Canal. On reaching the canal we turn right to head west alongside the north bank. Walking along we chat about how characters like William Cosway must have given hope to so many people struggling to survive. I am sure he lived well, but commendably he chose to provide for others rather than exploit them. We could certainly do with more of his kind today.

Initially the path is on the embankment but soon follows a narrower path besides the canal with the farm fence on our right. Our progress is slowed by the odd section of brambles smothering the path and the occasional pile of reeds deposited after recent waterway clearing. 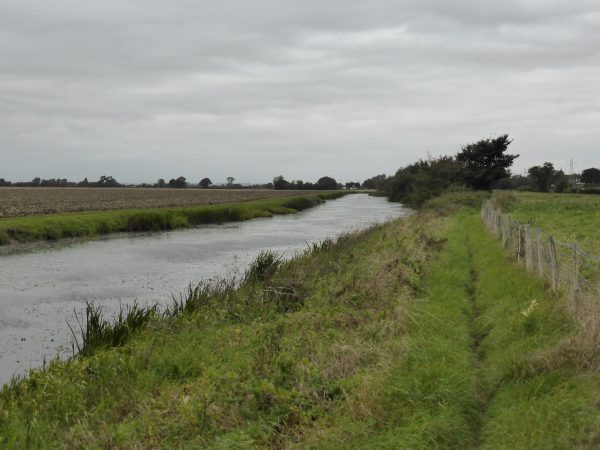 On reaching a minor road we turn right toward Ruckinge and after a hundred yards take a footpath on the left heading towards St Mary Magdalene church. You might think we are avid churchgoers; nothing could be further from the truth, but we enjoy the splendour of these old buildings and respect their religious association. 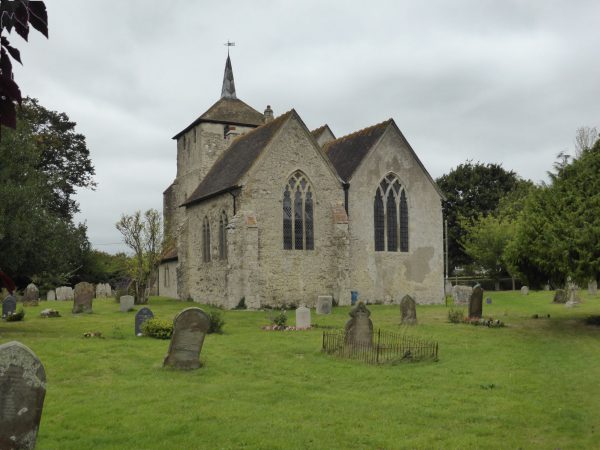 This is another fine church the main structure of the building was constructed in the 12th century and the top of the tower was rebuilt in the 13th century. Whilst Lynnie looks inside I wander around the churchyard, here the plaque under the Millennium Sign is full of local information, including that the Ordnance Survey celebrated its 200th anniversary at Ruckinge. The reason being General Roy created the first baseline for triangulation between Dymchurch and Ruckinge in 1787.

From the church we walk along the road into Ruckinge and then turn right to go back to the canal. We cross the canal and turn right walking along the south bank. 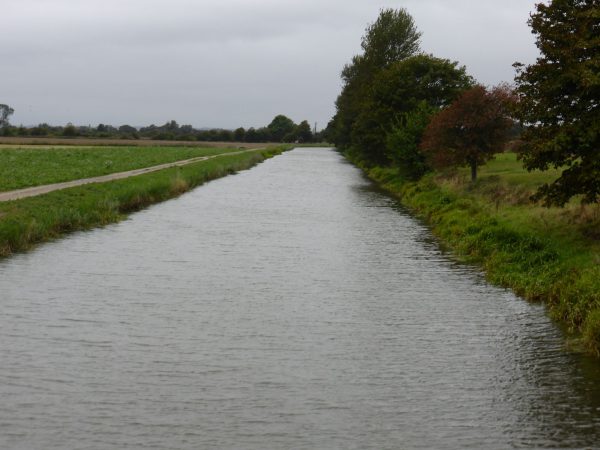 After almost two miles we reach a road and turn right to walk into Hamstreet. I am hoping to find a good old-fashioned bakery, but after a quick look around, we leave, disappointed, and head once again for the Royal Military Canal.  Instead of walking back along the canal we take a footpath that heads diagonally across fields in a south easterly direction to Weystreete Farm. 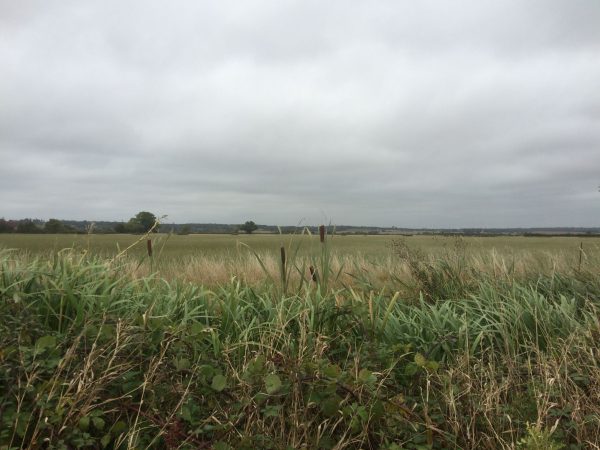 On reaching a minor road we turn left, walking along Wey Street. On the telephone wires the Starlings are gathering, this is always a harbinger for the changing seasons.   A bit further along we come to Wey Street Farm (not to be confused with Weystreete Farm) and the garden is an amazing, abundance of Dahlias. 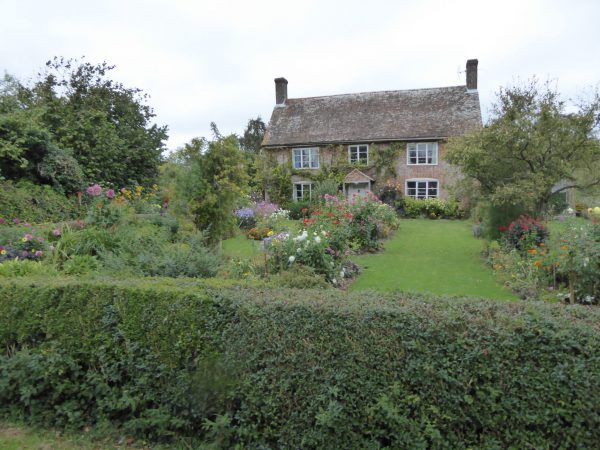 At the T-junction we leave the road and carry straight on following a footpath that leads us to another minor road, where we had intended to go straight on to another footpath. However, the entrance to the fields is impassable with overgrown brambles, it is so frustrating when this occurs. It would only take a few minutes for the landowner to clear this; one assumes it is a deliberate act to prevent people accessing the footpath. I feel like writing to the local authority!

Our alternative route is to turn right and walk down the lane; at a T-junction we turn left and head to Newchurch. As we enter the village we see an area of new trees with an information board. Experience suggests it is always worth making a small detour to find out the relevance of the location. We are not disappointed.

The fields we have just walked around were a temporary airfield during World War II, built as Advanced Landing Grounds in 1943 as part of the preparations for the D Day landings. In July 1943 it became a base for four squadrons, three Spitfire and one Hurricane. They later moved out, replaced by three Hawker Tempest squadrons. It was one of many temporary airfields that were of such strategic importance. By December 1944 is was restored as farmland.

In Newchurch we turn left passing the church and continue out along the road to Bellfield Farm CL. This has been a fascinating walk covering just over thirteen miles. There are clearly many historic sites to visit in this area.