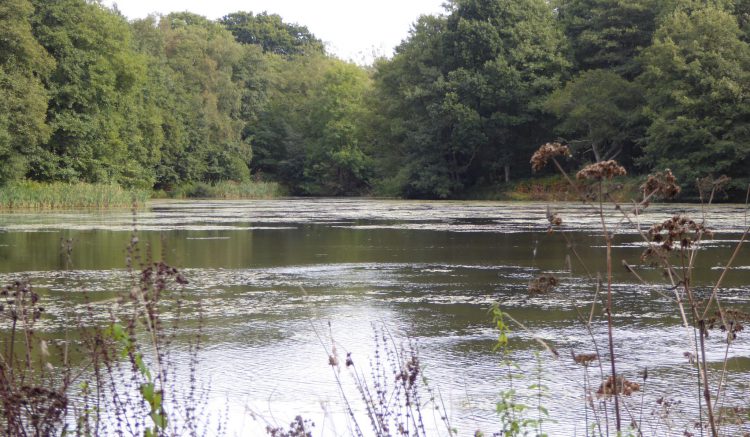 It is another cracking day; in previous years we have had good weather caravanning in September but this is one of the best.  After my morning walk and chores, which are interspersed with chats with our caravanning neighbours it is time to head out for the day.

Before our walk Lynnie pops into Tunbridge Wells and after dropping her off I turn on the car radio.  We don’t often listen to the radio and don’t watch any TV when travelling  (I rarely watch much at home), but these days when I turn on the radio it is invariably Radio 4 Extra and today I am in for a treat.  Just starting is the broadcast of an abridged account of George H Allen’s 1905 walk from Land’s End to John-O’-Groats.  George was a vegetarian and wanted to prove that such a physical challenge could be achieved by a non-meat eater.  He was also out to set a record time for the journey.  Amazingly he covered the 908.5 miles in 16 days, 21 hours and 33 minutes.  That is over 50 miles a day.  Unbelievable!

I thought I walked a lot but to keep that up is some achievement.  I make a note to get a copy of the book to read during the dark winter months.

Our walk today begins from the attractive village of Frant just off the A267 and we commence by walking across the green towards the A267, where a game of bowls is starting on the small village bowling green.  It is a real bonus to be playing this late in the season.  I have not played for years, but still retain membership of a club in Salisbury.  The last time I played there was a big debate about the club adopting coloured T-shirts for matches.  This club has gone one further and the chaps are wearing shorts.  I can’t see that happening in Salisbury for a while! 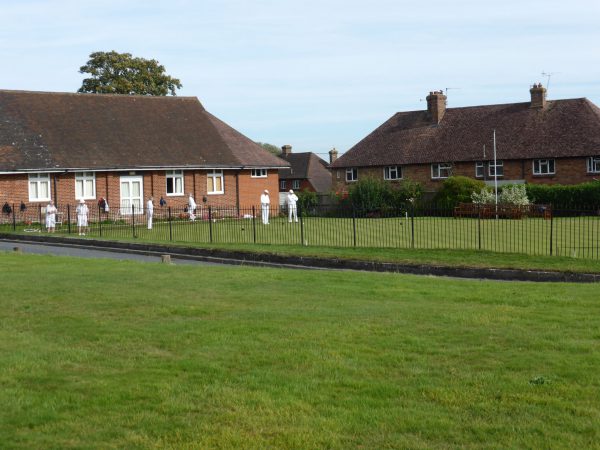 On reaching the A267 we turn left and then cautiously cross this busy road.  Just before the old telephone exchange we take a footpath on our right that soon descends through woodland.  We go through a gate in the fence of the deer park (Eridge Old Park) to join a permissive path with Wealden Walk waymarkers on it. 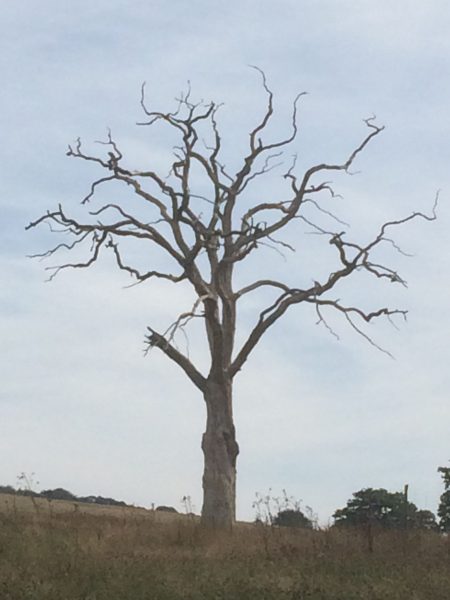 The path is well marked as it heads through Eridge Old Park, apparently this is one of the oldest hunting parks in the Country dating from Saxon times.  After a mile we are walking alongside lakes, I have read that there was a 16th century ironworks around these lakes producing guns and cannon balls.  Now there is no sign of the past industry, all is tranquil. 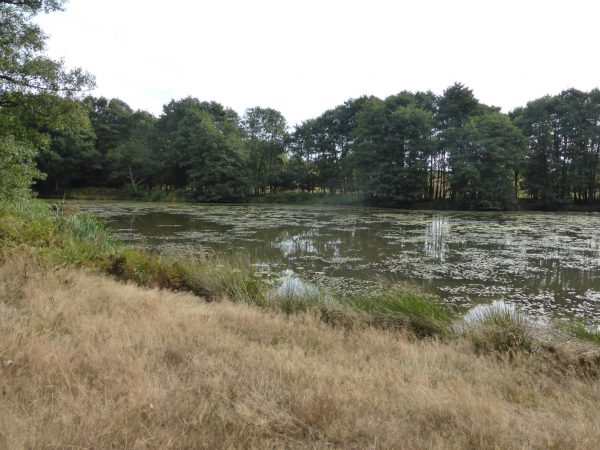 We follow the Wealden Walk signs through woods and open parkland towards Eridge Green.  This village was created by the 2nd Earl of Abergavenny who lived at Eridge Park in the 18th century.  He demolished all the existing village buildings and rebuilt tied cottages in a uniform fashion.  Visiting the village means crossing the very busy A26 so we opt to look at it another time.

We retrace our steps towards Mill Wood, but take a stile on the right at the edge of the woods crossing a couple of fields to join a minor road close to Steel Bridge.  Here we turn left and walk up the road.  Our plan is to take a footpath across a field in front of Steel Bridge Farm, however, the field is full of bears and calves.  There is an easy alternative route so we decide not to run the gauntlet.

Instead we continue along the country lane for about half a mile before turning right onto the bridleway leading down the drive of Hamsell Manor.  The manor house is not visible from the path; this was once the home of Winston Churchill’s daughter Mary Soames so I feel sure it is a prestigious property.

We carry on along the bridleway and on reaching Stitches Farm turn left to join the Sussex Border Path.  Soon we are walking across fields and spot a herd of deer grazing near the edge of the woods.  They are fine looking creatures with their resplendent antlers. 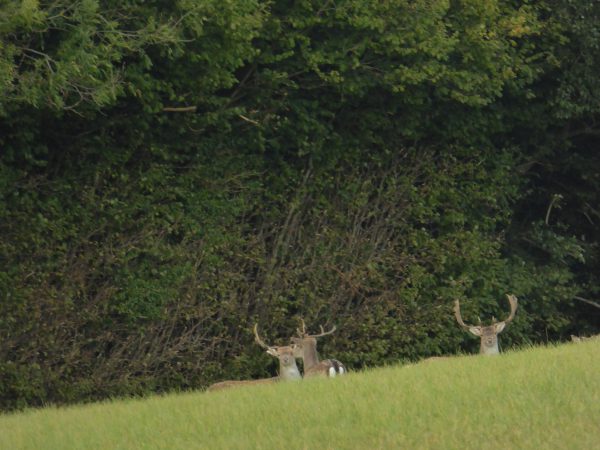 After crossing a couple of fields we pick up the minor road we were on earlier before detouring to Hamsell Manor.  We turn right and Lynnie is immediately drawn by a not to be missed photo opportunity of a herd of horned bears.  Whilst Lynnie seeks the perfect shot a couple slowly cycle by, their bikes heavily laden with gear.  They are obviously on tour and it looks like hard work! 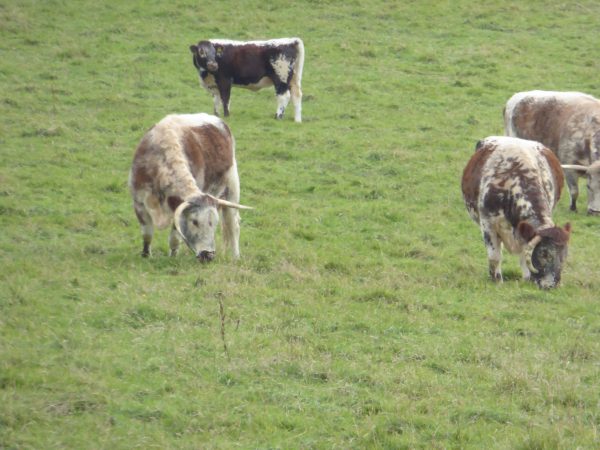 Resuming our walk the road inclines, the gradient is sufficient to slow the cyclists down so much that we’re in danger of overtaking them as they precariously weave from side to side.  These days I rarely use my bike, but if I did I would certainly get off and push if I got to the point where walking was quicker than riding!

At a fork in the road we go left, the cyclists slowly carry on to the right thereby avoiding the embarrassment of being passed by two walkers.  A quarter of a mile later we take a footpath on the left re-entering Eridge Old Park.  The route is still the Sussex Border Path and there are waymarkers to start with.  Slowly we go down towards a stream leading to Chalybeate Spring.

Back in the days of the 2nd Earl of Abergavenny ‘taking the waters’ was common practice.  Chalybeate Springs was a favored location for people coming to drink the iron rich spring water, said to cure all sorts of ailments. Apparently his Lordship was not keen on folk wandering across his land, so set up another location to take the water some three miles away on the northern edge of his estate.  This place has since grown into Royal Tunbridge Wells. 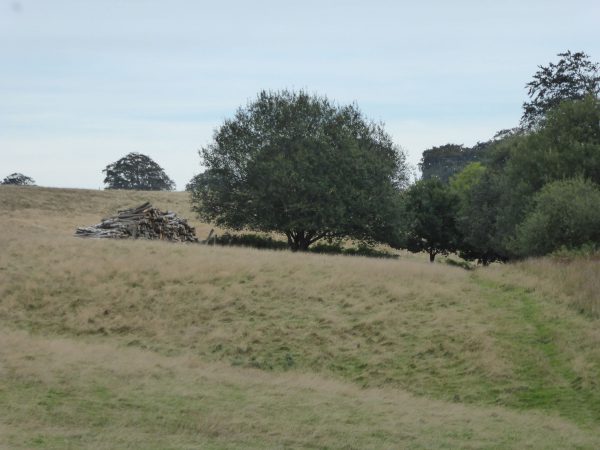 We follow the Sussex Border Path through the estate leaving via a gate in the deer fence close to the A267.  There are Wealden Walk waymarkers here taking a route through the woods parallel to the road.  This well walked route is easy to follow and in just over a mile we reach the point where we entered the deer park earlier.  From here it is a case of following the path uphill through the trees and on arriving at the A267 following the pavement into Frant to our car besides the green. 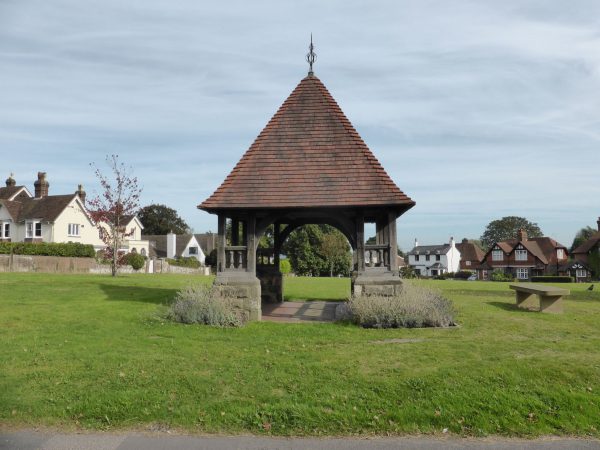 It has been a very enjoyable stroll through attractive countryside covering eight and a half miles, not much by George Allen’s standards!  The more we see of this area the more we like it.  We are due to move on again soon but hope to return before too long.