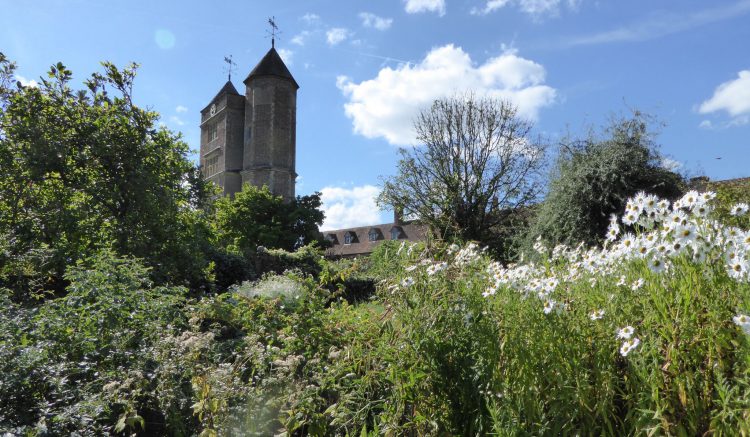 This area abounds with National Trust properties and Lynnie has been identifying a couple she would like to visit.  Top of the list is Sissinghurst Castle Gardens, our destination for today.  It does not take long to drive there from our pitch at Waghorns CL.  The dogs are not allowed in the gardens but can walk in the grounds.  So Lynnie is going to visit the gardens whilst I stroll around the grounds.

The site at Sissinghurst was once a Saxon pig farm, a manor house was built in the Middle Ages and much of what you see today dates from Tudor times when the brick gatehouse was built. The buildings were greatly enlarged in the 1560’s when it was the centre of a 700-acre deer park and the iconic Elizabethan tower was added.  From here the ladies could watch the deer hunt and look-outs would be at the top to indicate to the huntsmen where the deer herds were. A trip up the tower is well worth the effort to enjoy the magnificent views. 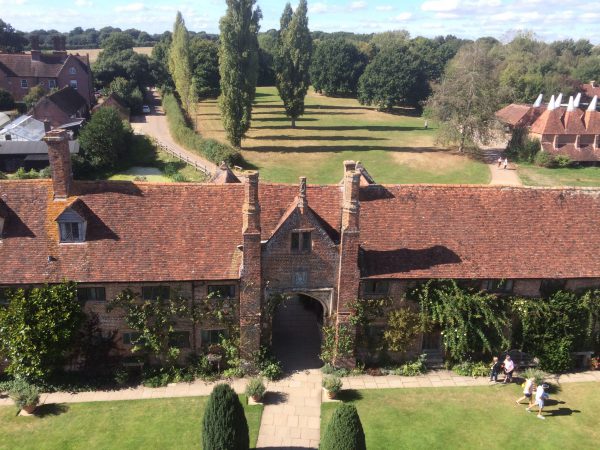 There is no castle but it gained the name when used as a prison for 3,000 French sailors during the Seven Years War (1756-1763), they were kept in vile conditions and referred to it as ‘le chateaux’.  The buildings were later used as a poor house for about a 100 men who worked the farm. It remained a farm with some of the buildings used to house farm workers whilst the now famous gardens were mainly used for growing vegetables for the workers. 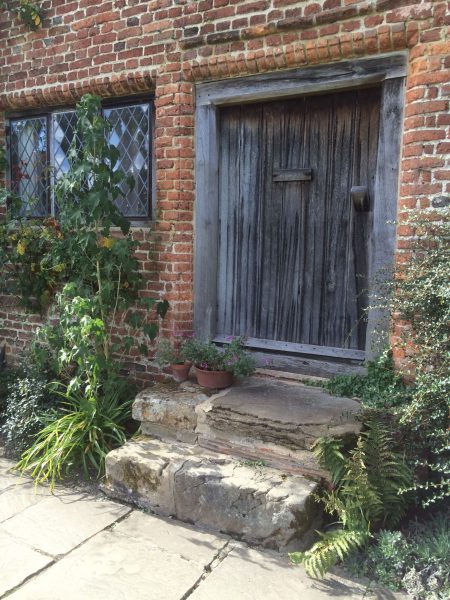 It was mostly derelict when Vita Sackville-West and her husband Harold Nicolson bought it in 1930, they were looking for somewhere to create a garden in the area and were enchanted by the romance of the place.  Vita was a writer and Harold an author and diplomat, on the edges of the Bloomsbury Group they have become known for their turbulent and unconventional marriage. They shared a passion for the garden that they created at Sissinghurst Castle with Harold responsible for the hard design whilst Vita focused on the abundant planting. 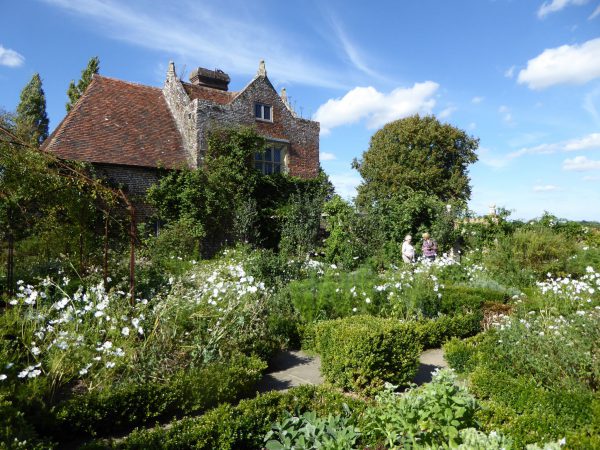 The garden is designed as a series of different ‘rooms’ interconnected so you discover vistas that draw you into another part of the garden. Today many plants are in bloom and the garden is lovely but it must have been truly glorious a few weeks earlier. 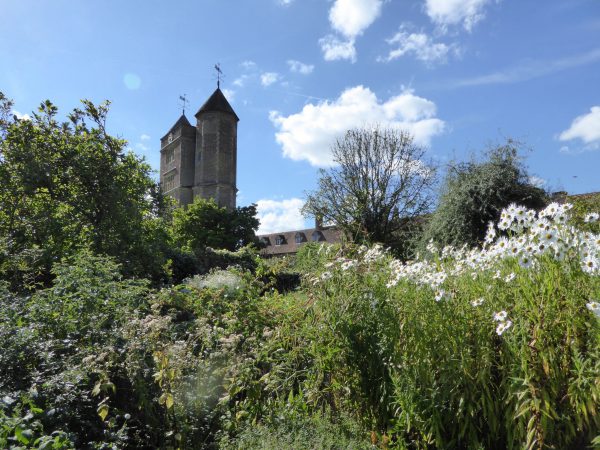 The National Trust now looks after the garden and buildings as well as farming the rest of the 460-acre estate.  Lynnie loved her visit but apparently a couple of hours were not enough time to do it justice. 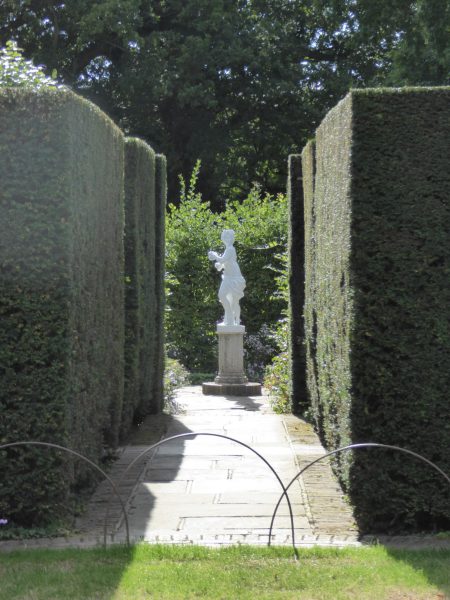 Meanwhile I began my wander by following a footpath sign; assuming it to be the circular walk in the leaflet we were handed on arrival.  This takes me along a tree lined path which is pleasant walking.  I then reach a road and turn right and after about quarter of a mile reach a junction. I check the leaflet but cannot locate the road; stupidly I have left the OS map in the car.  I have, of course, gone wrong! 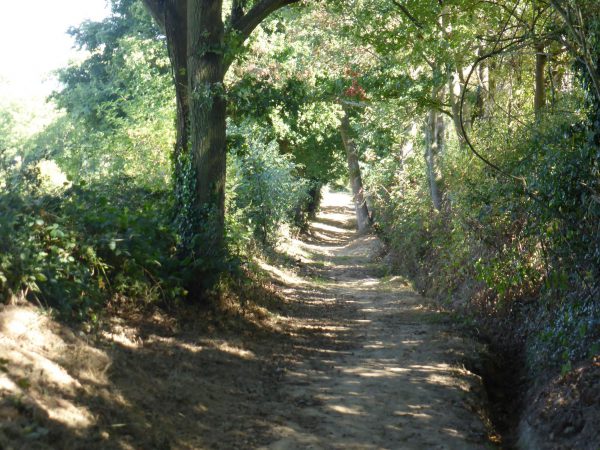 I turn around retracing my steps to the car park at Sissinghurst Castle, pick up the map and start again.  This time I follow a tree lined path that is waymarked as the grounds walk, this is a pleasant stroll, after about half a mile the waymakers point to the right and I follow the track to meet the wonderfully named Dig Dog Lane.  I turn right and the route gradually climbs.

As the road sweeps to the left I take a footpath on the right and follow this route back to Sissinghurst Castle.  There are fine views all around and despite the throngs of people in the car park I only meet one other person on my wander. 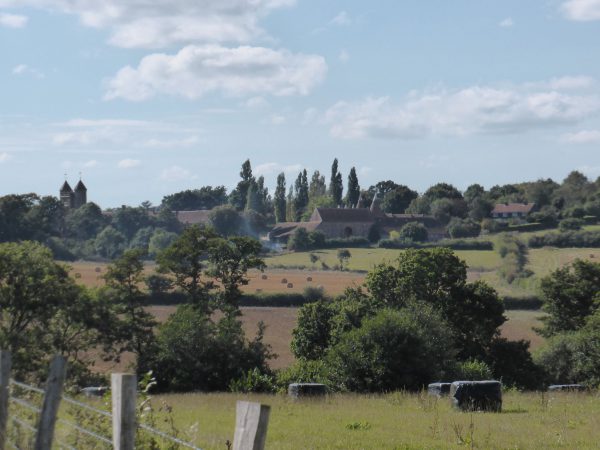 Back at the car park I munch a sandwich and wait for Lynnie to return for our main walk of the day.  My little stroll, which only took in part of the grounds, has covered just over three miles, half of which was in the wrong direction!  But the sun was shining and the birds singing so it was no hardship.