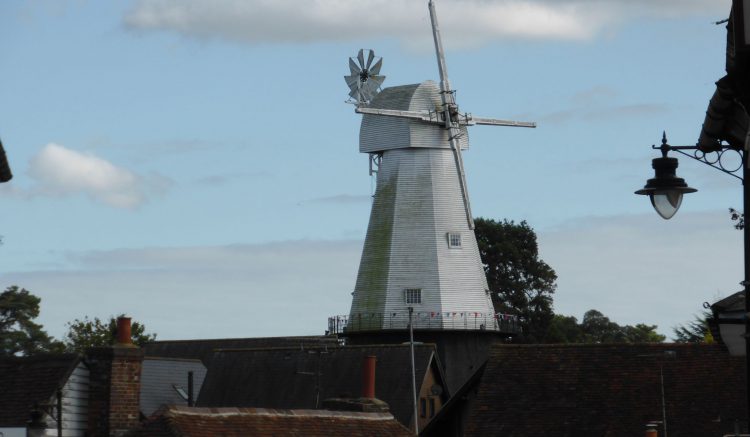 After our trip to Sissinghurst Castle Gardens we still need to get a decent walk in so make the short drive to Cranbrook, parking in the town centre by the Co-Op shop.  White weatherboard houses dominate Cranbrook, like many other places in this area. 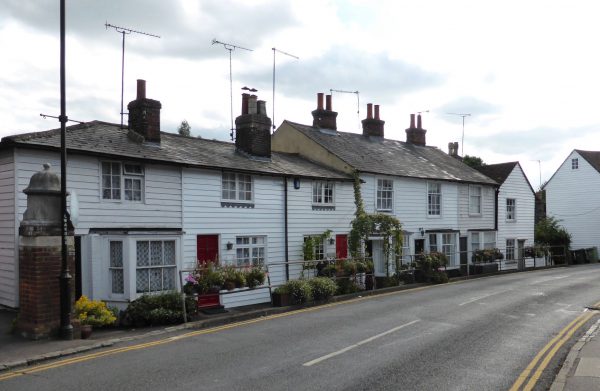 On leaving the car park we walk down the High Street and then turn right into Stone Street.  Directly in front of us is Union Mill. 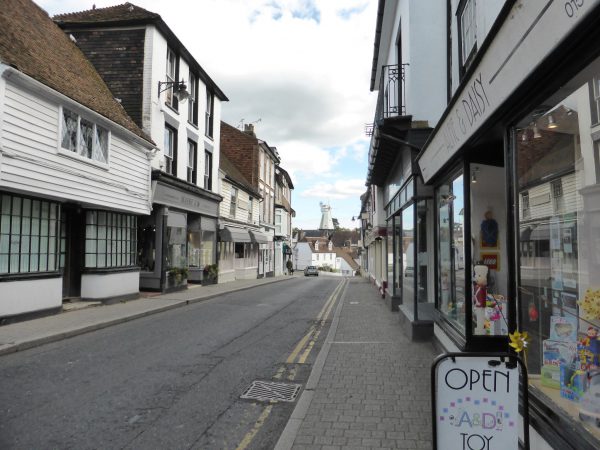 Apparently this is the last surviving mill of four that were once in Cranbrook.  It is now a local tourist attraction, looked after by a charity, the Cranbrook Windmill Association, their informative website provides a brief history of the windmill.

The mill was built for Mary Dobell, in 1814, to establish a business for her son, Henry.  After Napoleon’s  defeat in 1815, there was a great depression in England causing the bankruptcy of many businesses, including Henry Dobell’s in 1819.   A union of his creditors (mainly local farmers and businessmen) ran the mill thus giving it its name. When the debts were discharged in 1832 the mill was sold to John and George Russell and remained in their family until the death of John’s great grandson in 1958.

At a junction we turn left up Waterloo Road and pass Cranbrook School.  The plaque outside says that “John Blubery (died 1518) bequeathed funds for a ‘frescole howse for all the pour children of the towne’.  I take this to mean a free school for all the poor children of the town.  The school received a royal charter from Queen Elizabeth I in 1574.

According to the school’s website they are one of the few state boarding schools in the country.  Education is free (as long as the child passes the 11+), however, it does cost over £4k a term to board. So whilst parts of John Blubery’s wishes are met it probably rules out the majority of the poor of the town. 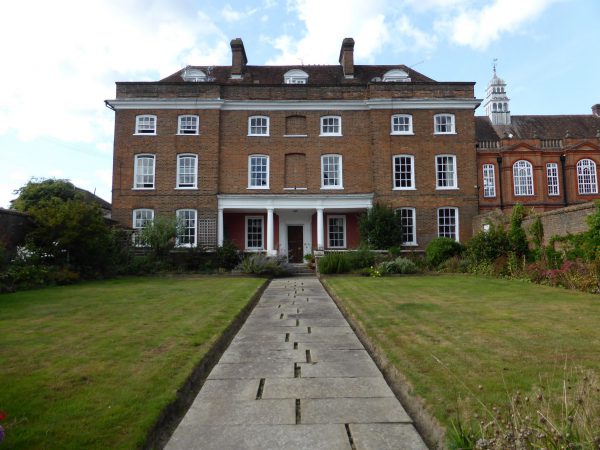 We carry on up the road and soon pick up a footpath on our right; this leads us besides the heavily fenced Oak Hill Manor Park.  We catch a glimpse of the grand house tucked away between the trees.  We speculate how much it would cost to live here?  Later an internet search shows the property and surrounding 370 acres was on the market for £8m in 2008, so just a bit out of our price bracket at the moment!

The path we are on has joined a track, but soon leaves this to enter woods, on exiting we reach a field, which we cross and then turn left along a footpath towards the A262 on the outskirts of Sissinghurst.  We have purposely come this way, despite alternative footpaths, because earlier whilst driving into Sissinghurst we spotted an enormous Penny-farthing Bicycle and were intrigued by its significance.  Our wonder is soon satisfied.  It has been erected to celebrate the ‘Tour de France’ passing through the village on 8th July 2007. 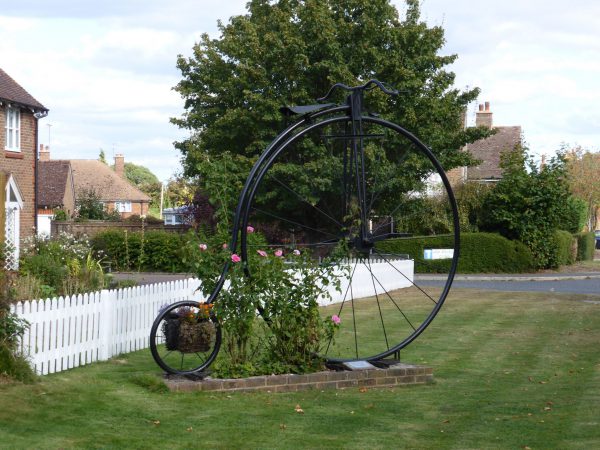 We continue through the village besides the A262 and on the far side take a footpath on the left by a layby that passes the sewage works (no walk is complete without passing a sewage works!) this then enters the edge of an orchard.  We follow a well-worn path taking us into woods on our right hand side.  Although not marked as a footpath it appears we have joined one of the paths around Sissinghurst Castle grounds.  It is a cracking bit of woodland. 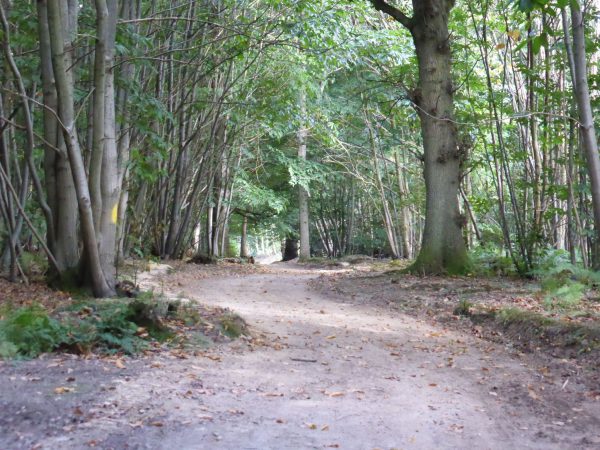 We follow the way markers that lead us besides a hedgerow with an abundance of hips and haws and then into the orchards surrounding Sissinghurst Castle.  Whilst at the gardens earlier Lynnie had contemplated having an ice cream, she has spent the last couple of hours regretting not taking the opportunity.  So I find a convenient bench whilst she goes off to remedy this.  Unfortunately, the specialist ice cream stall has closed and all that Lynnie can find is a Solaro (according to an ex-work colleagues of Lynnie’s this product is like sex on a stick, which sounds painful to me!)

We leave Sissinghurst Castle along the route that I walked earlier towards the west ( then the wrong direction, but now the correct route).  On reaching the road we carry straight ahead and after a couple of hundred yards fork right and follow the lane to Cranbrook Common.  At the A229 we turn right to walk along the wide verge, soon crossing to join a pavement on the opposite side and then after a garage take a bridleway on the left.

This route takes us past Hillywood House we carry straight on (ignoring a footpath on our left) and go into Hilly Wood, after walking through a field of saplings we re-enter woods.  Now it gets confusing, there are paths everywhere.  We carry straight on and at every opportunity take a descending path on the left.  More by luck than judgement we soon meet a track and turn left to head back towards Hockers Edge.

The track then heads towards Friezley and at a poorly marked footpath (a stone footpath marker by a gate) we turn right to head towards Hazeldean Farm. There is major barn redevelopment going on here.  Soon this will be a small hamlet and we admire the restoration and redevelopment work that is going on.

We carry on and cross a minor road, passing a ‘grand design’ type property with high wooden fences and then after woodland enter open fields where a cracking old caravan is pitched up.  I am not sure there would be enough space for the two Labradors and us. 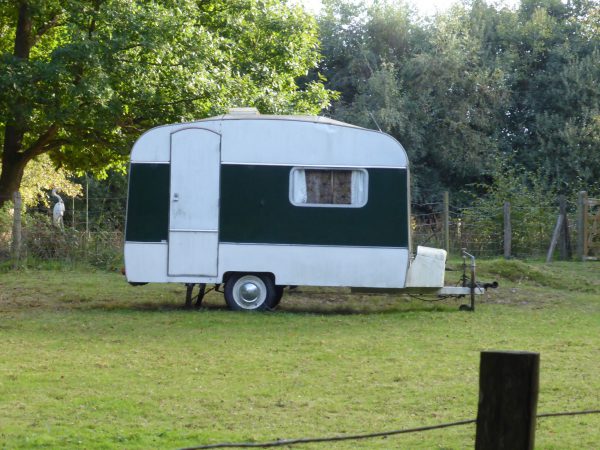 We then pass Manor Farm besides a pond, we wonder if the building is as old as it looks or if it has been constructed more recently to look old.

Here we cross the A262 and take a track towards Spratsbourne Farm with its collection of fine buildings.  After crossing a footbridge we enter woods turning right to follow the path as it gradually climbs through the trees of Angley Wood to join the High Weald Landscape Trail where we turn left and follow this route back into Cranbrook. 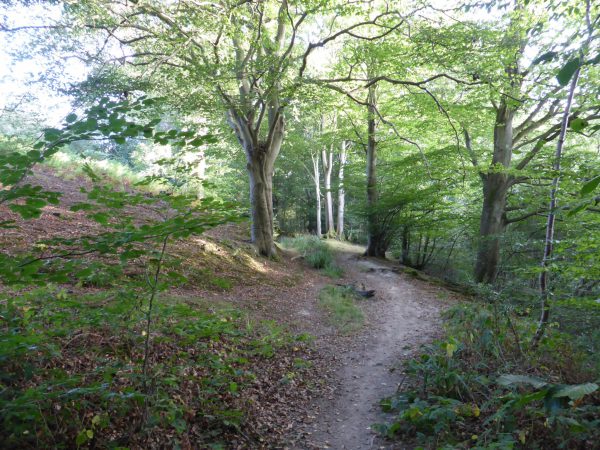 Our walk has covered over nine miles, which added to the three before lunch and my morning walk totals a good days walking.  Arriving back at Waghorns CL the dogs are ready for a well-earned rest.  Whereas Lynnie and I still have the short walk down to the Old Vine for a pint and a meal.  Today we are celebrating thirty-three years of marriage.  It sounds a long-time and I am not sure where the time has gone!