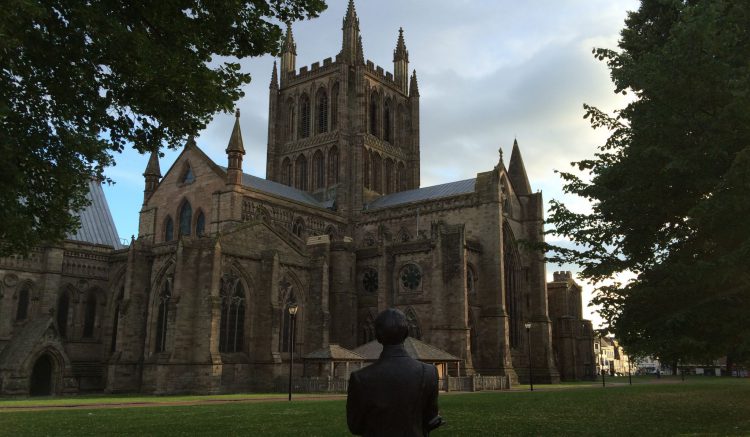 It is forecast to be another hot day, not as unbearably hot as yesterday but still towards 30 degrees.  I take the dogs out in the cool of the early morning, repeating the route we did on our first day here.  As it is so warm we decide to avoid being in the car today and walk from the site instead.

Leaving Ashley Farm CL we turn left along Grafton Lane and in just under half a mile climb a stile on the right to follow a footpath through a field of sheep, after another stile we cross a field of wheat following what looks like a path through the crops.  A Chinook flies low across in front of us, an impressive site. 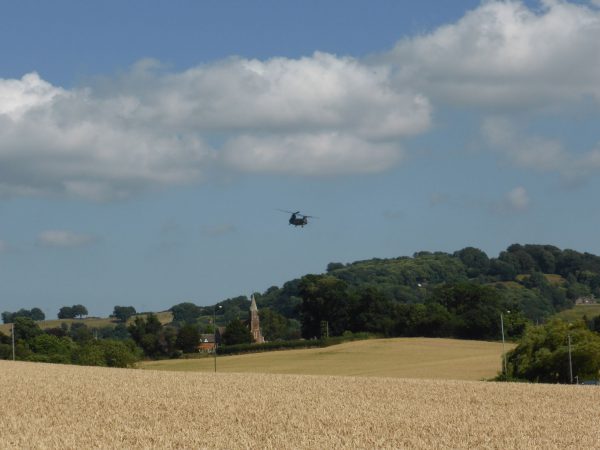 We are now besides the busy A49, which we cross with care to join a minor road opposite going to the village of Bullinghope.  We pass the church of St Peter, built in 1886 to replace a nearby church that was built around 1150 before falling into disrepair in the 1800’s. 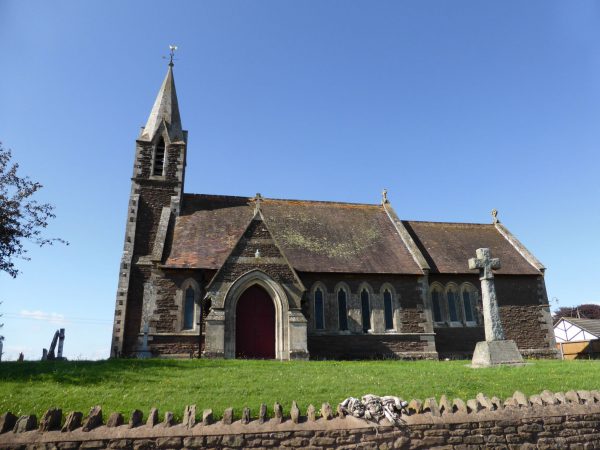 Shortly after the church we take a footpath on the right taking us down through fields to cross Norton Brook and reach the B4399.  We cross and go straight on over fields to reach a minor road, turning left we soon reach another road, which we cross to enter a field.  Following the footpath over Red Brook we are then in a field with young bears.  We don’t take to bears so decide to retrace our steps to the road and find an alternative route.

Back on the road we turn left and walk uphill.  At a fork in the road we take the left option and head to Dinedor Cross. At a crossroads we continue straight ahead and then descend towards Dinedor, on the way passing The Hollow Farm.  The lane is quiet and it is pleasant walking.

In Dinedor we stop to admire the fine old barn at Glebe Farm and then take the lane opposite the barn to head up a track leading into a field.  The next field we enter has ripe wheat; a few more days of this sunny weather and we it will be the start of harvest. 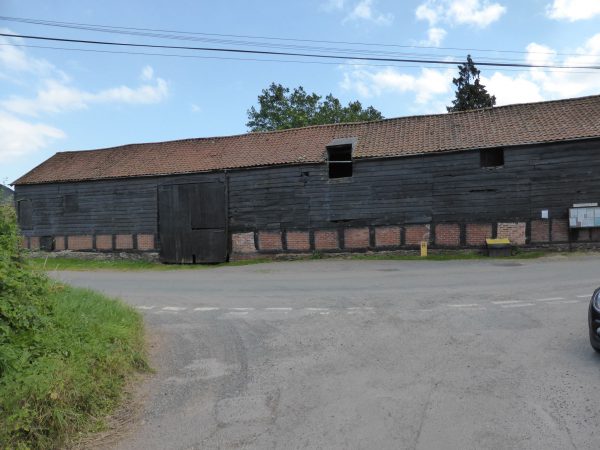 The path runs besides a house before reaching a road (B4399), we cross and then tackle a particularly challenging stile.  There is no route through for the dogs so they have to be lifted over, but on the far side the ground slopes away very steeply so it is difficult to put them on firm ground and trying to place them on the stile is challenging.  Cussing we carry on and then the cussing turns to swearing.  As we go over a footbridge we spot a large herd of very frisky young bears in the field ahead.  We consult the map but with the river on one side our only option is to return to the road.

It is just as challenging crossing the stile from this direction, once over we turn right and walk besides the B4399, it is a busy road and we proceed with caution.  I had thought that this section would be besides a tranquil river as opposed to a busy road!

Soon the road straightens out and it becomes easier going.  As we enter Rotherwas we turn right at a roundabout to walk to Rotherwas Chapel.  This is an English Heritage site and a notice board provides information.  This was the private chapel of the Bodenham family and stood in the grounds of Rotherwas House, which was demolished in 1926.  It is thought that there had been a medieval chapel on the site, but the present building was started by Sir Roger Bodenham in 1583.  The tower dates from the 18th century and the chancel from the 19th century. 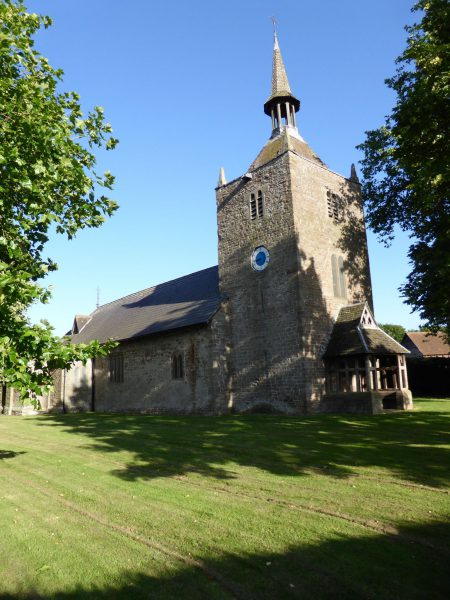 The chapel is locked so we cannot look inside but it is impressive from the outside.  Close to the chapel, in the grounds of Church Farm, there is a fine old barn. 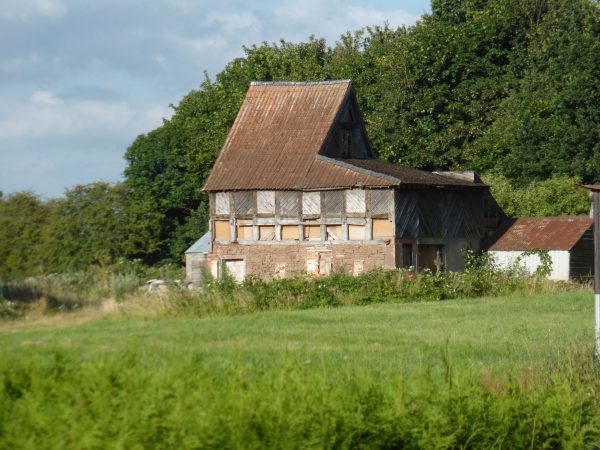 We retrace out steps towards the B4399, but before reaching it take a new footpath and cycle way on the right.  The land around has been prepared for industrial units.  Soon on our right we see derelict buildings and it all looks a bit unsightly.  However, this site has huge historic significance.  This was the location of Royal Ordnance Factory Rotherwas.

The site opened in 1916 and became one of the main explosive filling sites in the UK. It had more than 370 buildings covering over 300 acres.  By October 1918, there were 5,943 employees, 3,977 of them were women.  The components were produced elsewhere and then the explosives were inserted into the shells and detonators fitted on this site.  In 1942 two bombs were dropped on to the site by the German Luftwaffe, killing 22 people. 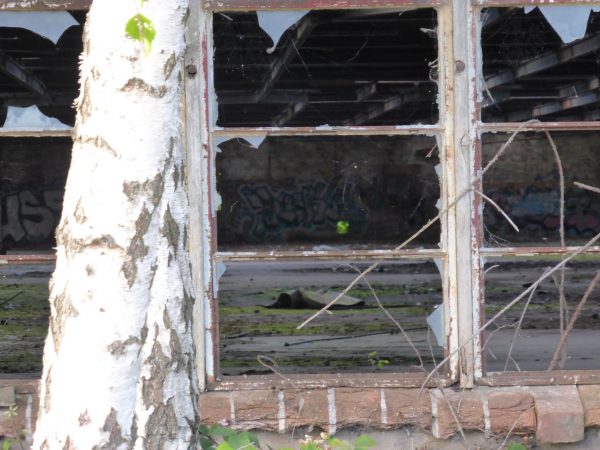 The site continued operating until 1967, it was then closed and has since fallen into decline.  We continue our walk along the path speculating on the working conditions and how women were seen as able workers during the war, but soon after where expected to return to a life of domesticity.

Our route now crosses a new footbridge over the river Wye. Then we follow a route into the centre of Hereford bringing us close to Victoria Bridge, this was built in 1898 to commemorate the Diamond Jubilee of Queen Victoria. 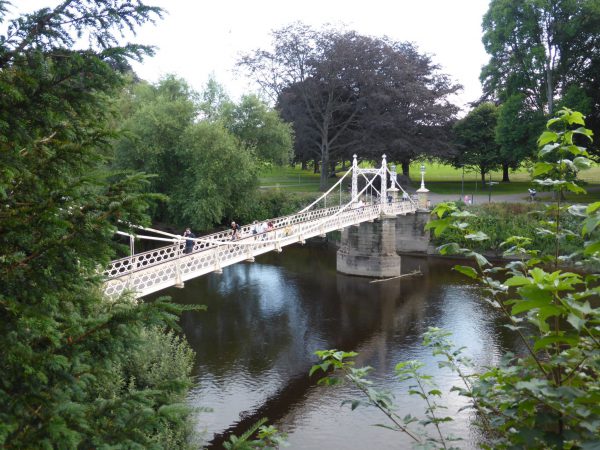 We are now in a park, Castle Green, with a bowling green and a monument.  We speculate if this one is for Wellington or Nelson, these two seem to have monuments all over the country.  I wander closer and discover it is indeed for Lord Nelson.   Apparently Nelson was made a freeman of the city in 1802, and spent a lot of time at nearby Ross-on-Wye.  The column was erected in 1809, but there was not enough money for a statue on top so an urn takes its place. 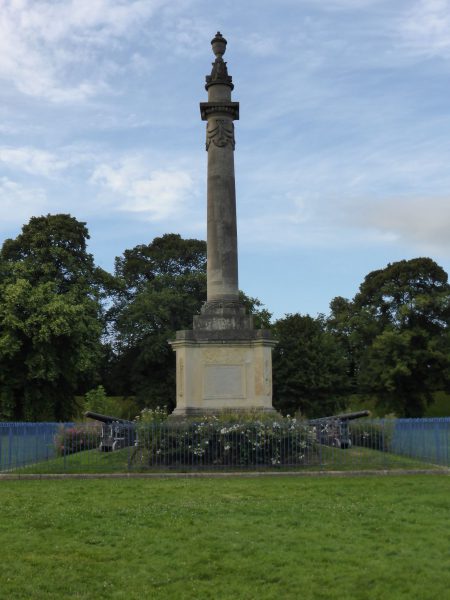 Next we wander into the cathedral close, in the corner there is a wonderful statue of Sir Edward Elgar.  This was commissioned for the cathedral and produced by Jemma Pearson, based locally in Craven Arms in Shropshire.  We have seen many statues and sculptures, some good and others awful.  Probably one of the worst is the Ted Bates statue outside of St Mary’s football ground.  Bates was a great servant to Southampton Football Club and a real hero, his statue does not do him credit even though it replaces the original that was even worse!  I think Jemma’s Elgar is one of the best statues I have ever seen.

Sir Edward was a local man born near Worcester, I don’t need to write about his musical talents they are well known.  The bit that I find interesting is that in 1903 he purchased Royal Sunbeam pushbikes for himself and his wife, Alice, he named his bike Mr Phoebus and used to cycle for miles getting inspiration for his music.  Jemma captures man and bike perfectly. 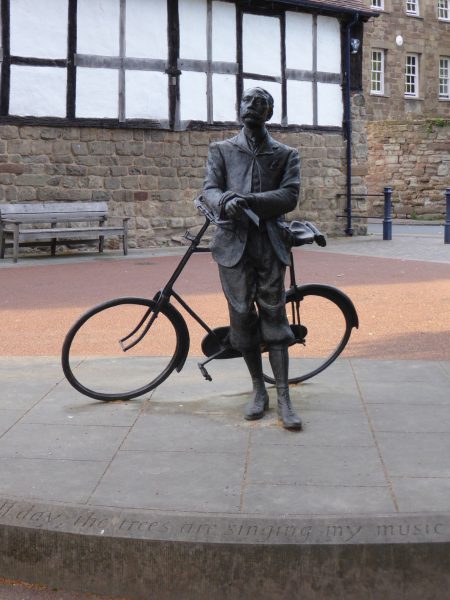 The other bit that I loved when I was reading about Elgar was a quote attributed to his daughter, she said “her father was reluctant to settle down to work on hand but could cheerfully spend hours over some perfectly unnecessary and entirely unremunerated undertaking”.  I can’t see a problem with that; indeed it sums up my attitude to paid work and unremunerated blogging.

Our walk out of Hereford follows the route that Crosby and I took yesterday, over the Wye Bridge and then up Ross Road (even more litter) and back along Grafton Lane.  Our walk is just short of ten miles and back at Ashley Farm CL we settle down for a pleasant evening with a cold Guinness, hot barbeque and cracking sunset.  Whilst parts of our walk were disappointing it turned out to be an interesting day. 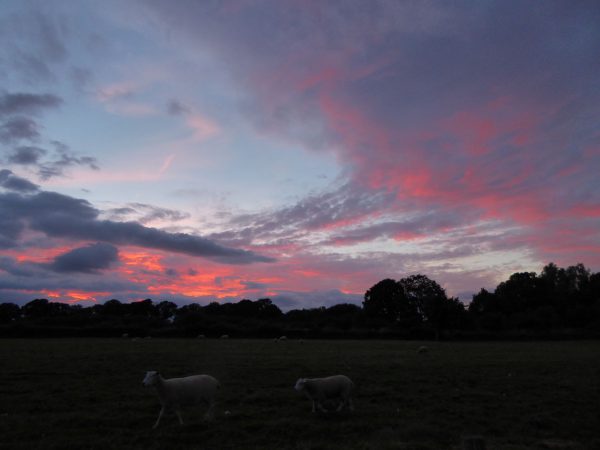 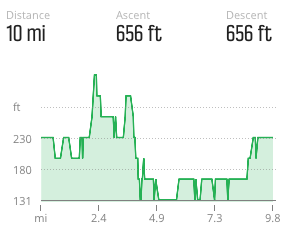