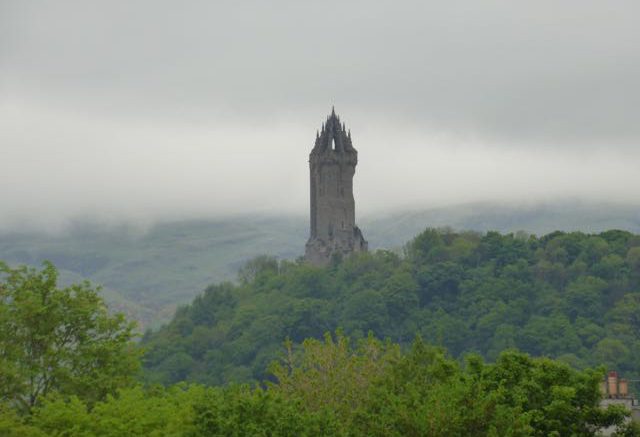 Yesterday was cold and miserable, but it did mean that I could focus on doing some work and popping out a couple off times to the woods opposite our site at Carr’s Hill CL. This is a convenient spot to wander with the dogs, far enough for them to stretch their legs after the previous day’s exertions in the Ochil Hills, but they will want to get a few more miles in today.

We have studied the map and identified another longer walk in the Ochil Hills, but today brings low cloud and little point climbing in poor visibility, especially when the forecast is for brighter days later in the week. So instead of hill walking we make our way to Stirling for an amble about.

We find a car park near the centre of Stirling and pay the £1.40 for the day. In Salisbury you can’t park for an hour in the centre of the City for that price. Here it costs £5.00 a week to park, back home it is £8.00 a day. Salisbury is supposed to be a tourist City, but surely an £8.00 a day parking charge is off putting.

I think that those elected in my home City to make the decisions over local issues ought to have a look at what they achieve in Scotland. Car parking is cheap, the grass on verges, roundabouts and parks are attractively planted and well maintained. The more I see of Scotland the more I am tempted to up sticks and move north, the downside is the weather.

In 2009 Lynnie and I had a brief trip to Glasgow and spent a weekend in Pitlochry, on the way back we stopped at Stirling and visited the Castle. It was an interesting few hours and planning this tour we agreed that we should spend some time exploring Stirling. 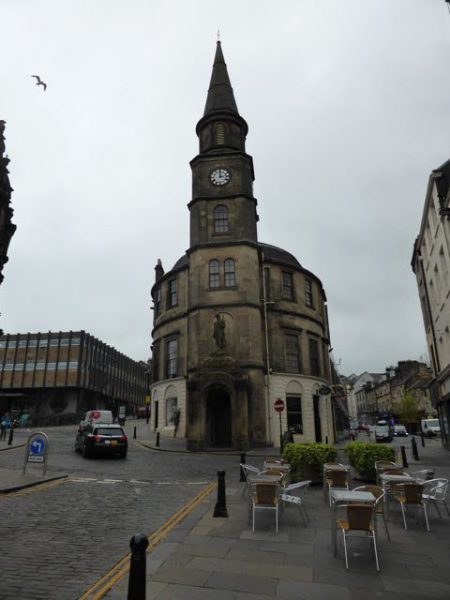 We walk through the town centre picking up the B8052 heading towards Gowanhill at the foot of the hill we walk up Mote Hill, the information board says that this is known locally as the “heidings hill” being the site of a number of high profile public beheadings (or heidings) in the 13th and 14th centuries. Apparently the most notorious of these was the beheading on 14th May 1425 of Murdoch Stewart, the 2nd Duke of Albany. Stewart was the Governor of Scotland when King James I was a prisoner in England, but on James’ return was found guilty of treason.

Nowadays the beheading stone is safely secured in a cage, but is a bit of a gruesome tourist attraction. 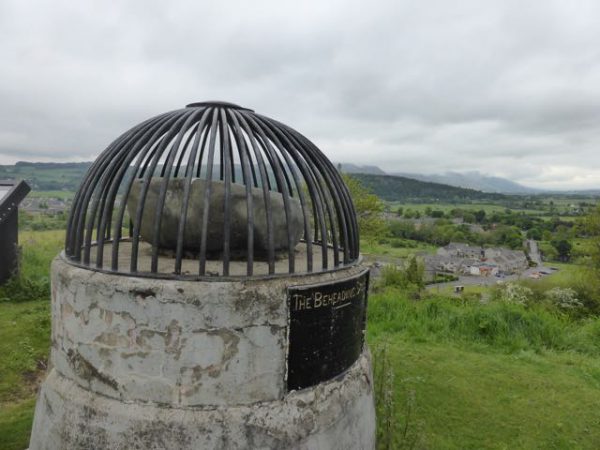 In my schooldays I had no interest in history. I could relate to subjects like geography or biology, but history seemed pointless. I am therefore, far less knowledgeable than Lynnie (who I am reliably informed was far more studious than me) on past events. One of the benefits of visiting places on our travels is that I discover so much that had previously past me by. I had never heard of the Battle of Stirling Bridge, which was a key battle in the first war of Scottish Independence.

Another information board states that on 11 September 1297 Scottish forces under the command of William Wallace and Andrew de Moray defeated an English army under the command of John de Warenne and Hugh de Cressingham. From our viewpoint the Scots were across the other side of the River Forth and the bridge was a wooden structure. On the morning of the battle the English moved men and horses across the narrow bridge, when a few thousand men had crossed Wallace ordered the attack and the Scots soon overcame the English. It was said the defeat of the English cavalry by the Scottish Infantry was a major factor in the outcome of the war.

We walk down from Mote Hill to cross the River Forth on the old bridge apparently used by the Jacobites, led by Bonnie Prince Charlie, in 1746 as they retreated north after their failed attempt to retake the British throne on behalf of the Stewarts. 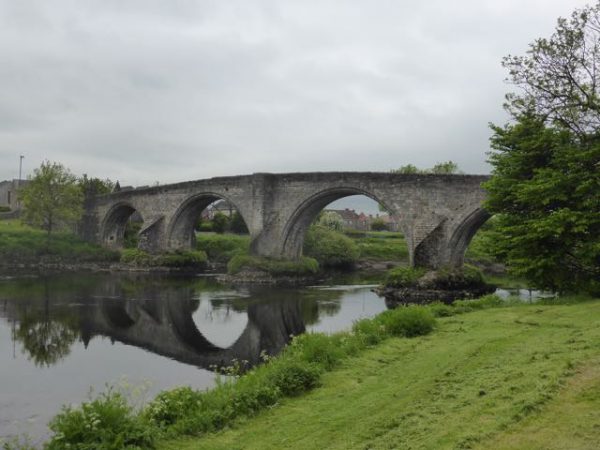 From this bridge we get a good view of the main road bridge “Stevenson Bridge”, named after its designer Robert Stevenson, the grandfather of Treasure Island author Robert Louis Stevenson. 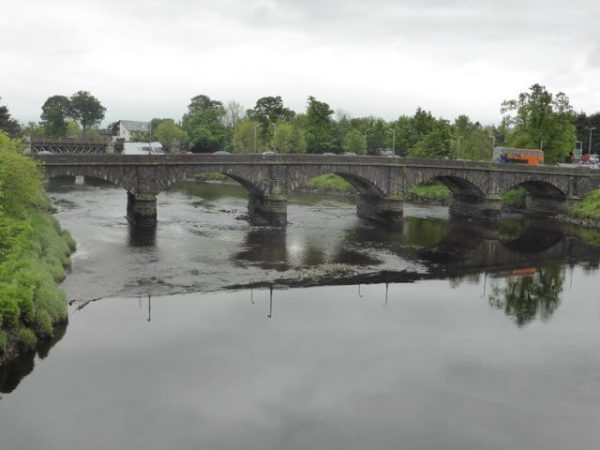 We walk besides the A9 to Causewayhead at the roundabout a small monument catches my eye, erected in memory of Harold and Frank Barnwell, brothers who were Scottish Aviation Pioneers. In 1909 they made the first powered flight in Scotland and on 30th January 1911 they flew at a height of 50 feet for 600 yards. In October of the same year they flew at 200 feet for five miles. Harold became chief test pilot for Vickers but lost his life in a plane crash in 1917. Frank went on to design planes, the most famous of which was the Bristol Fighter of which 3100 were made. He also designed the Blenheim, Beafort and Beaufighter. In 1938 he also lost his life in a plane crash. I think the achievements of these men are worthy of recognition, but it is a pity that the model of the plane is so out of proportion. 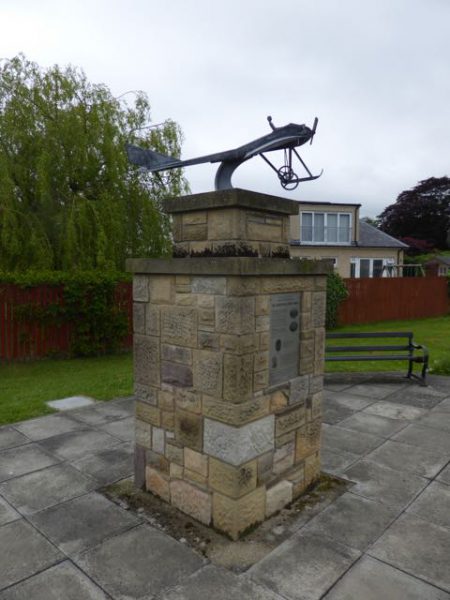 From Causewayhead we walk up the road to the Wallace Monument. We have arrived just too late to gain access to the monument itself but the helpful staff direct us to the route through the grounds and up to the structure. 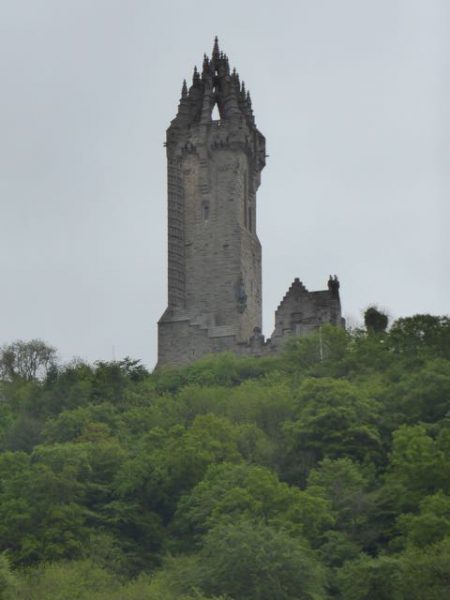 It is a steady walk up Abbey Craig to the tower that was built in 1869 to commemorate William Wallace. 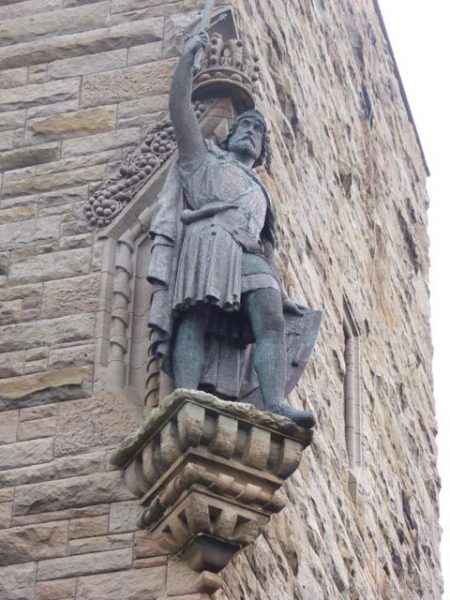 We stop and admire the view across the River Forth to Stirling Castle. 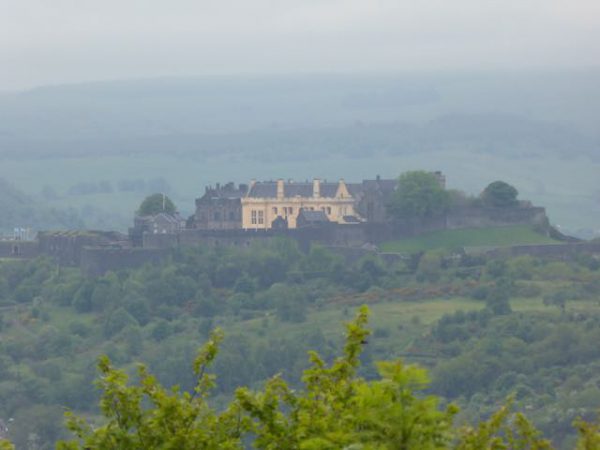 After retracing our steps to the centre of Stirling we wander up to the Castle. This too is closed but having previously toured the Castle and Argyll’s Lodgings across the road (which I can recommend) we are not too bothered. 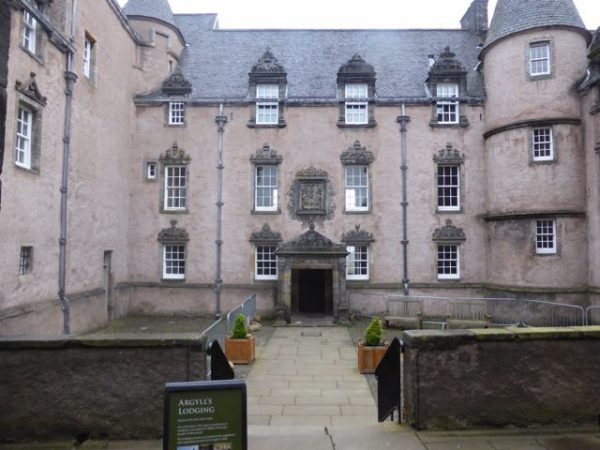 Whilst admiring the outside of the Castle a coach on a whistle stop tour of Scotland pulls up and foreign tourists spill out to take their obligatory selfies before piling back in and making for their next stop. The driver did not even switch off the engine!

We leave the castle via the graveyard besides the wall and stroll into Stirling, there are some fascinating buildings in this old town. I am particularly taken by the Boy’s Club’ which was converted in 1929 from the Old Butter Market, it is a fine building but it is the inscriptions on the lintels that are wonderful “Quarrelling is Taboo”, “Play the Game” and “Keep Smiling”. Sound words in 1929, which still have a resonance today. 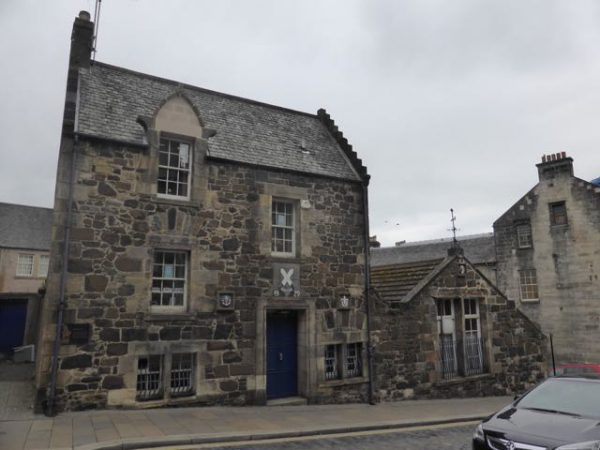 It is not often that we just wander about towns, but it is early evening the shops are closed and we can just admire the buildings. We meander towards that car park but constantly stop to wonder at the fantastic architecture. Some of the old civic buildings like the library are magnificent. 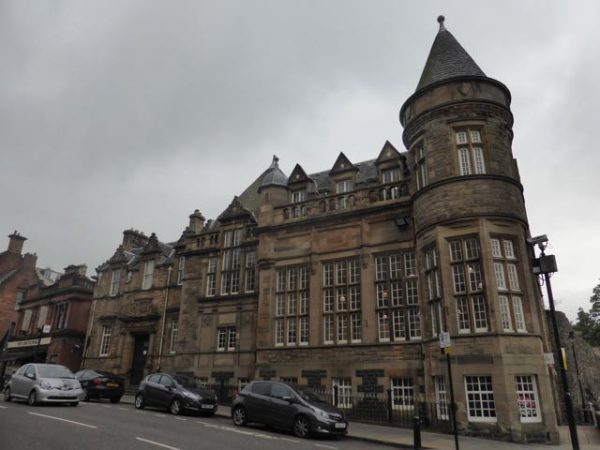 In these modern times most people are rushing from shop to shop in search of a bargain, whilst simultaneously looking at their mobile phones, never thinking to look up. I know I am guilty of not stopping and looking at the buildings in Salisbury whilst I am there. On our travels we try to look up at the buildings rather than the shops fronts. I am sure we passed many of the usual High Street stores on our way, but I could not tell you which, but I could definitely direct you to some fine buildings.

Our stroll around Stirling has covered just over six miles, it has been thoroughly enjoyable and I feel I have learnt more history than in all those hours sat in history lessons as a schoolboy.