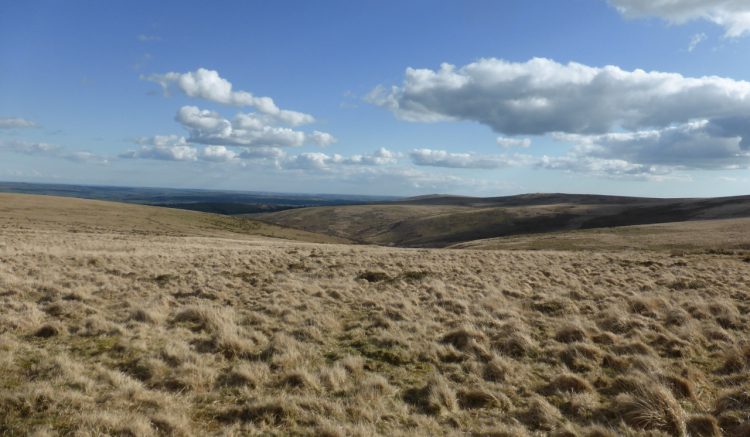 The forecast for today is good, supposedly warm and fine. So where better to head for a good long walk than Dartmoor. Over the years we have walked in most of this Country’s National Parks but have not really explored this one.

The starting point for our wander is Peek Moor Gate, about half a mile north west of Creston. There is only space for a couple of cars to park and we are fortunate to get one. Today is one of the many where we jam about following our instinct and keeping an eye on the map to ensure that we do a circular route.

Leaving the car we walk through a gate and along a clear path with Ugborough Beacon high to our left. About half a mile in I ask Lynnie at which point we start to climb on to the ridge. She has no idea because she does not have the map, which is a problem because neither do I! We are faced with two choices, an afternoon without the map or one of us returning to the car to pick it up. We momentarily debate option two as to which of us will fetch the map. Twenty minutes later I am back with map in hand!

We resume at a keen pace, in the spring sunshine this is very pleasant walking, the path leads us to another footpath at Owley Corner. Here we turn left following the path uphill towards Spurrells Cross. As we start to climb we get a blast of the cold north wind that has been the feature of the last few weeks.

I am not sure if the wind was in my eyes or I am getting late onset dyslexia, but I read Spurrells Cross as Squirrels Cross and spend the next five minutes wondering how it got such a name. There are very few trees up here, and Freddy’s know that squirrels like to live around trees. Perhaps they were cross because there were no trees and they fancied the spot for their new abode. It certainly has stunning views. 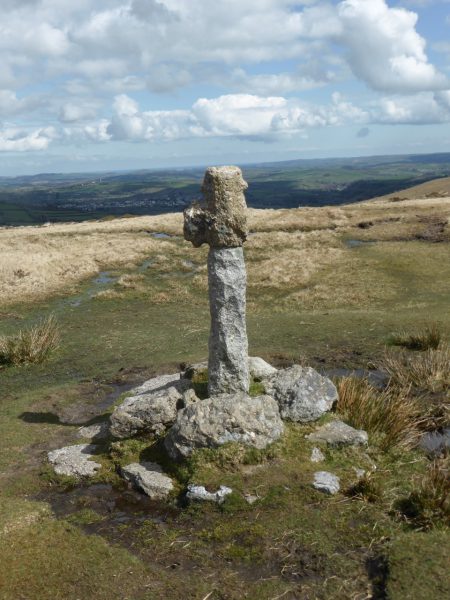 I digress, we get to Spurrells Cross and despite the sun it is chilly. Apparently the Cross dates to around the 14th century and marks a crossing of north/south and east/west routes. It was used as a way-marker by the peat diggers as they trekked across the moor.

We turn right and receive the full value of the icy blast as we head along the broad path that is part of the Two Moors Way. There are cracking views from here but frankly it is too cold to stop for long to fully appreciate the scenery. On a brief stop we look to the southwest where Plymouth Sound is now visible. 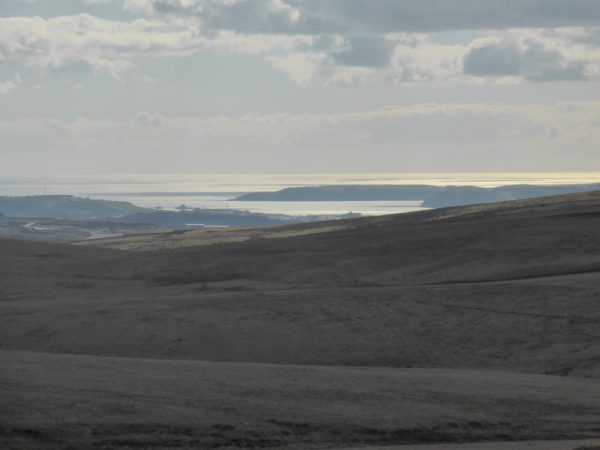 Our route takes us across Ugborough Moor, even with the wind in our face it is easy going. The surrounding moor looks desolate and bleak and it is hard to visualise that this area once had industries dotted about. After passing around Three Barrows hill we arrive at Leftlake Mires, the site of an old quarry. 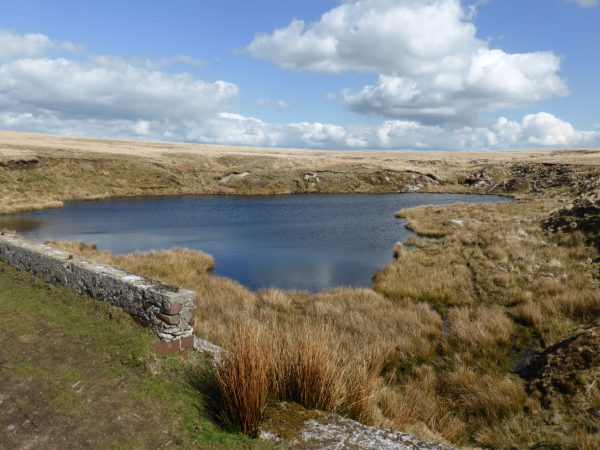 Further on our route takes us past the remains of a disused tin mine, the outlines of buildings are still clearly visible. 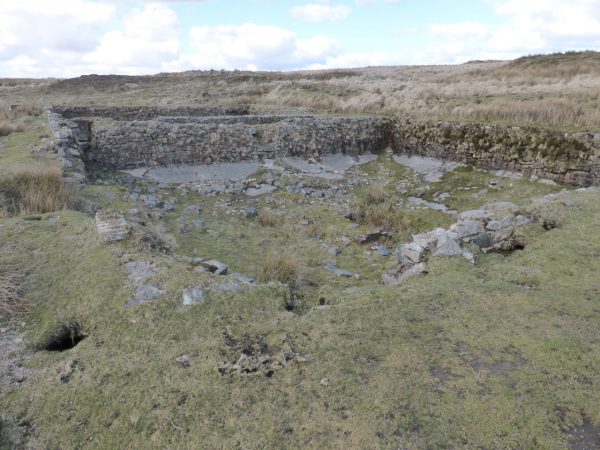 As we walk along the deposit tip from Red Lake China Clay works is directly in front of us. 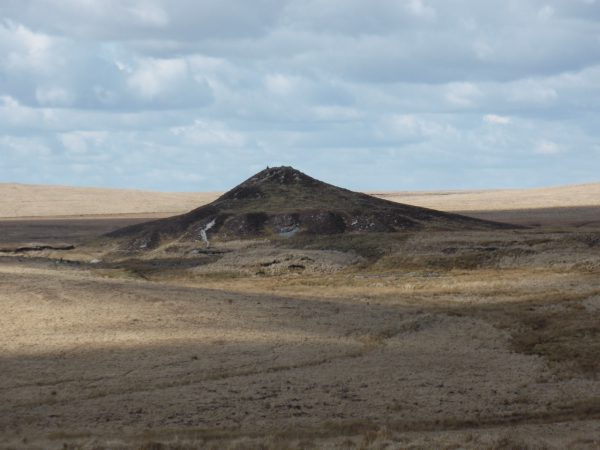 On a sunny April day the cold wind is bearable, but in the depths of winter this must have been a harsh place to earn a living. As the track bends we follow a marker that leads us up a boggy path to Crossways. Here we depart from the Two Moors Way and pick up a path following the route of a dismantled tramway.

After a short distance we take a slight diversion to wander up to Petre’s Cross on Western White Barrow. 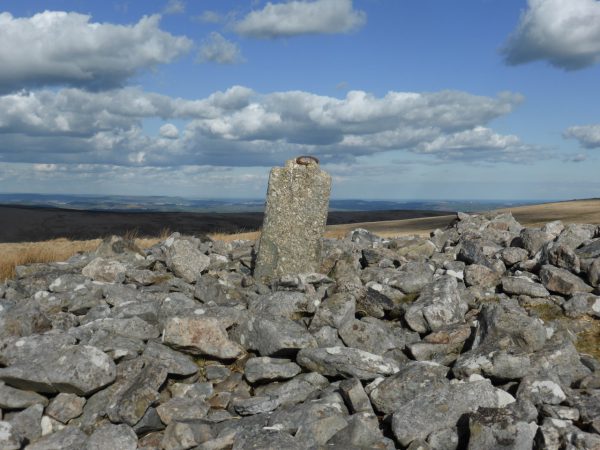 Back on the tramway we follow the well-worn (and in parts boggy) path as it gradually descends Brent Moor, regular milestones are an interesting feature. 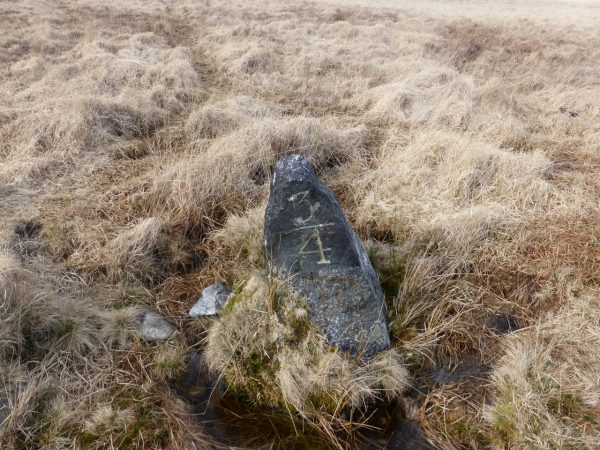 Just after passing the Avon Filtration Station, serving the Avon Dam Reservoir a mile or so to the north, we pick up a tarmac track that we follow as it bends down to go alongside the River Avon. Here it is not much more than a large brook, nothing like the wide river that we followed from Aveton Gifford a few days ago. 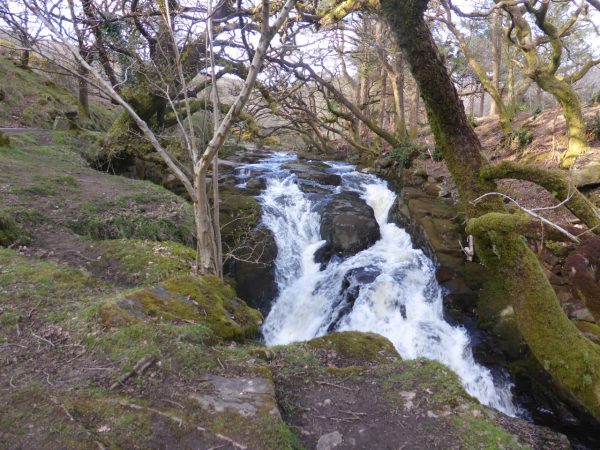 On meeting a road we turn right and after passing through a gate by a cattle grid continue on the lane crossing Bala Brook and picking up a bridleway on the right. The route soon becomes rough going, the track has been eroded into big steps and it is a steep climb. Lynnie has that look on her face meaning she is starting to tire of this walk. 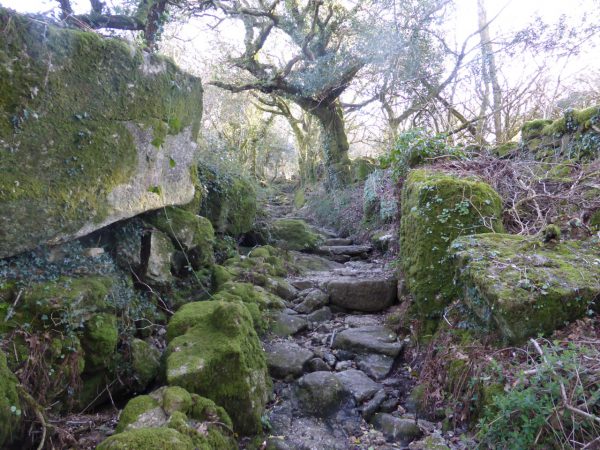 Emerging onto a broad grassy track we consult that map and Lynnie expresses dismay at the distance we still have to travel. She thought the car would be parked around the corner. We walk on (or trudge in Lynnie’s case!). 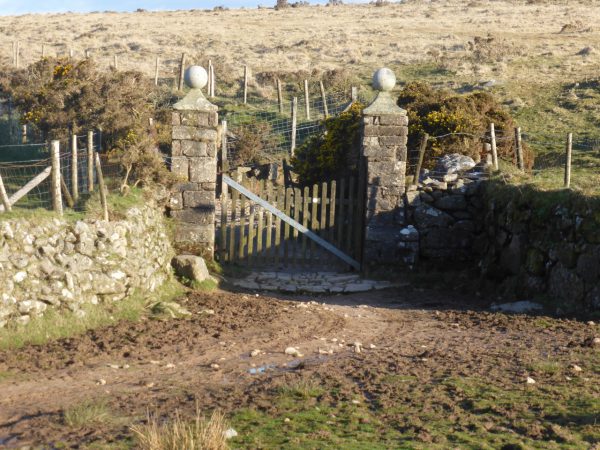 After West Glaze Brook we turn left and head across the moor (with the odd boggy section) to Owley Corner. From here it is a left turn and a wander back towards Peek Moor Gate where the car patiently awaits our return.

The Suunto Traverse records our walk as just over thirteen miles. Driving back to the caravan I casually ask Lynnie if she enjoyed her outing. The publishable version of her response is that she enjoyed the first six miles but thought that was far enough. I deduce from her response that I am going to have to unleash the gin bottle when we get back to pacify her!

To view this route on OS Map Click Here 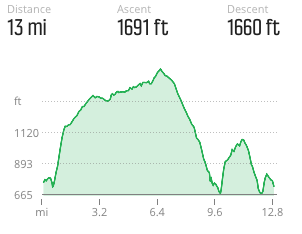