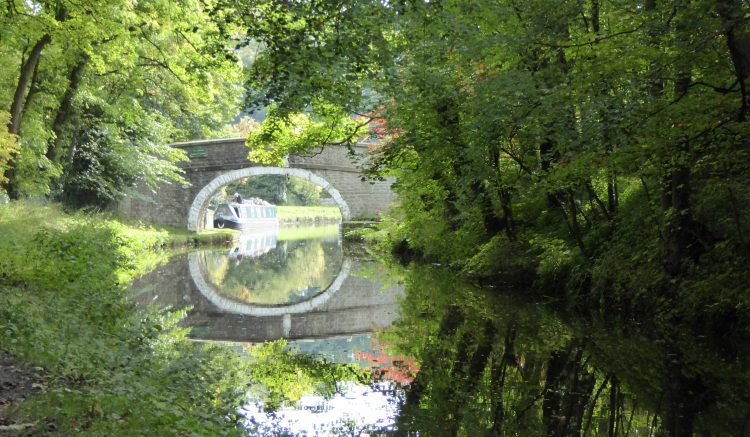 About twenty-five years ago whilst we were holidaying with the children in the Dales I took young Freddy on a walk from Gargrave. It was a cracking day with the early part of the walk on the towpath of the Leeds – Liverpool canal and the return stretch on the Pennine Way. I recall sitting on a wall with my nipper and watching a Curlew in a field below us. It was the first time either of us had seen one of these stunning birds so close.

On numerous occasions since then Lynnie and I have driven through Gargrave and I have often told her about the walk. Today Lynnie gets to do the walk for the first time and I get the chance to see if my memories of the walk do it justice. 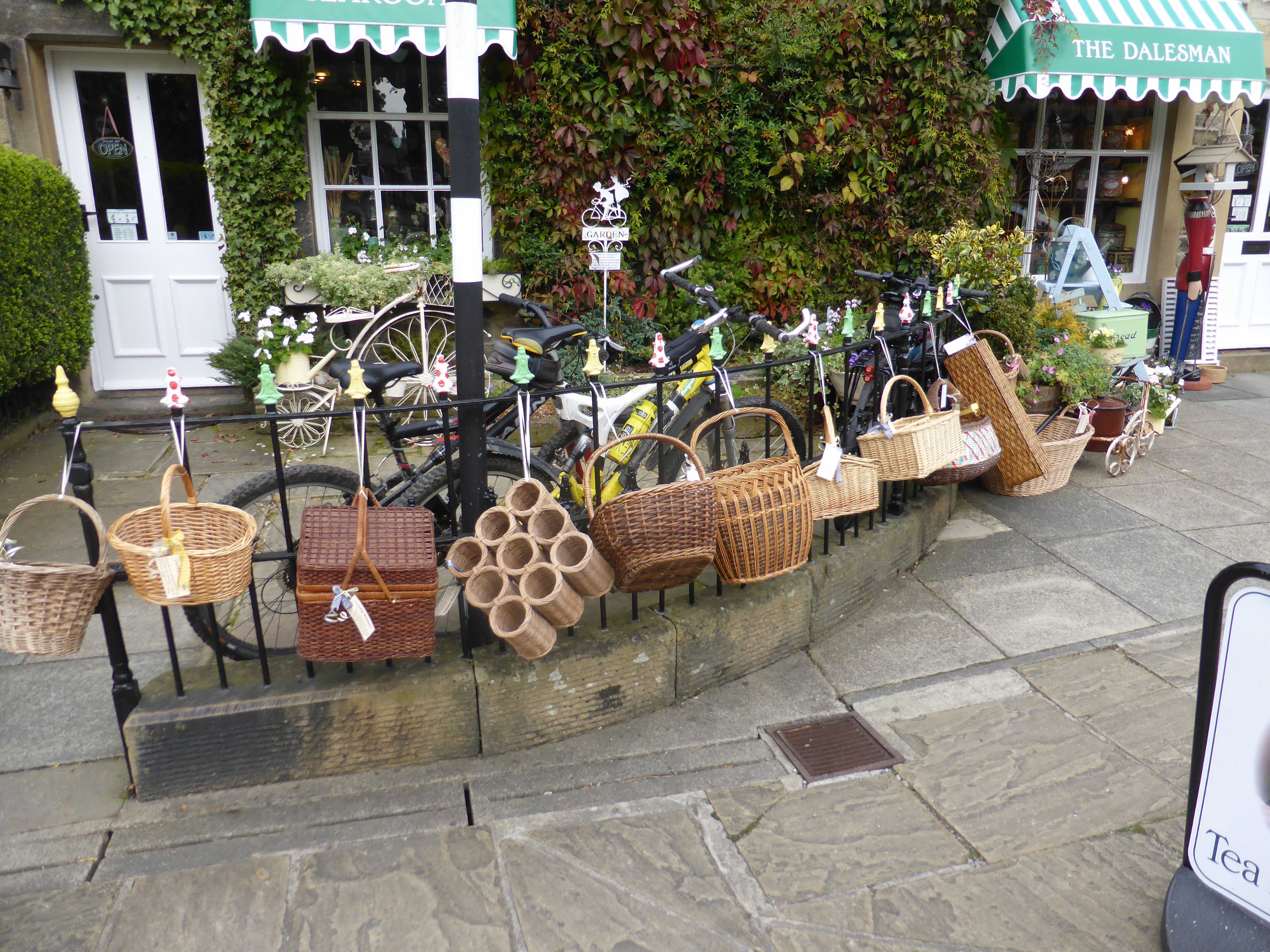 We park in the centre of Gargrave and walk back towards the A65, on reaching the road we turn right and walk alongside it for about half a mile until we reach the canal. It is a relief to leave the busy road and we immediately stop to look at the lock with the Anchor Inn on the other side of the canal. 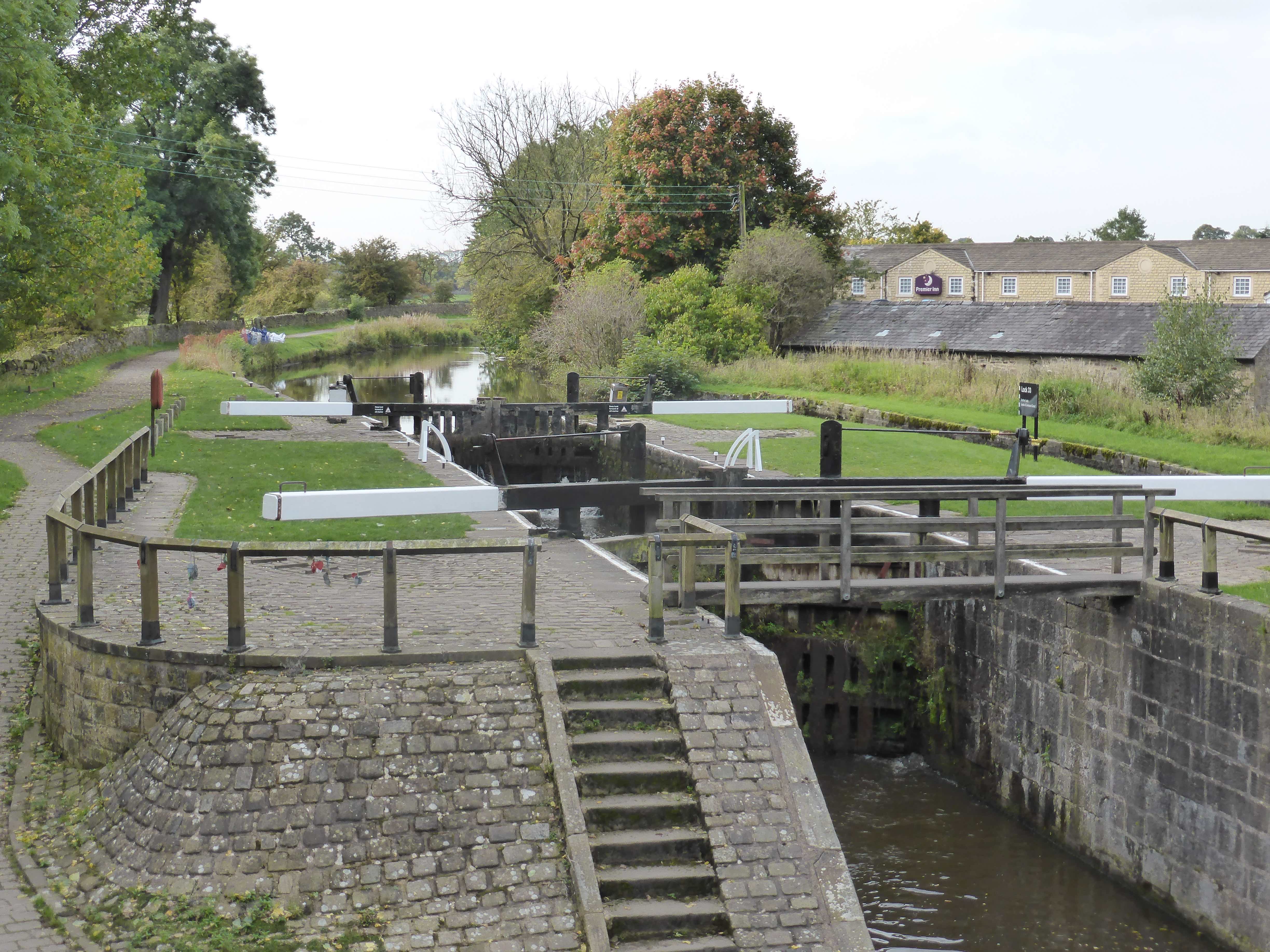 The Leeds and Liverpool canal starts close to the Liver Building in Liverpool and ends in the centre of Leeds it is 127 miles long and took 47 years to build. It was fully opened in 1816 and in its heyday was an important route through the Pennines.

It is a cracking autumnal day but we are virtually alone as we wander along. 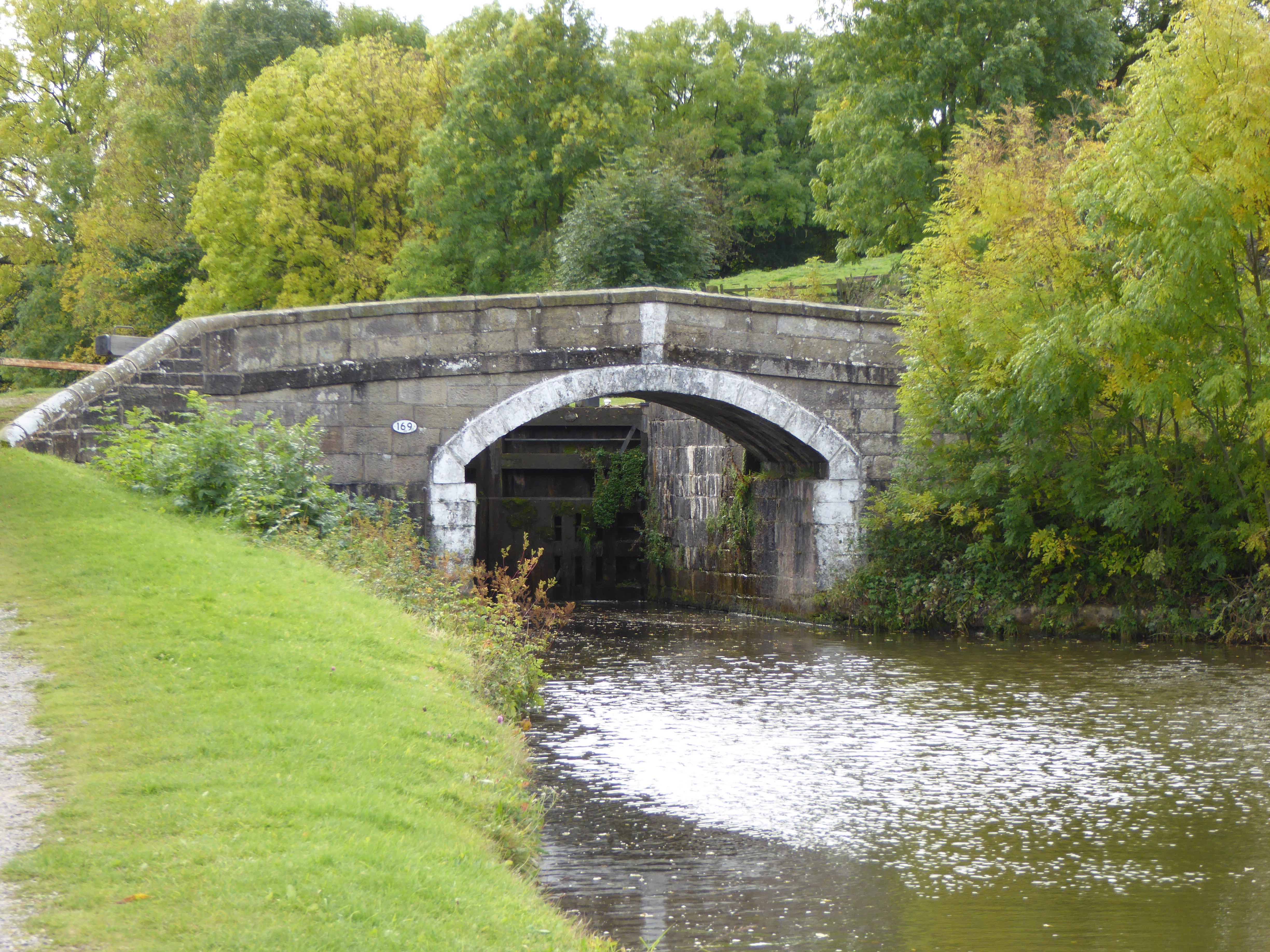 It is easy going walking along the towpath and although out in the open countryside we still get the sense of the importance this canal played in our industrial heritage. Particularly when we arrive at Bank Newton Locks (six in total) and the large basin with mooring for those waiting to pass through the lock system. 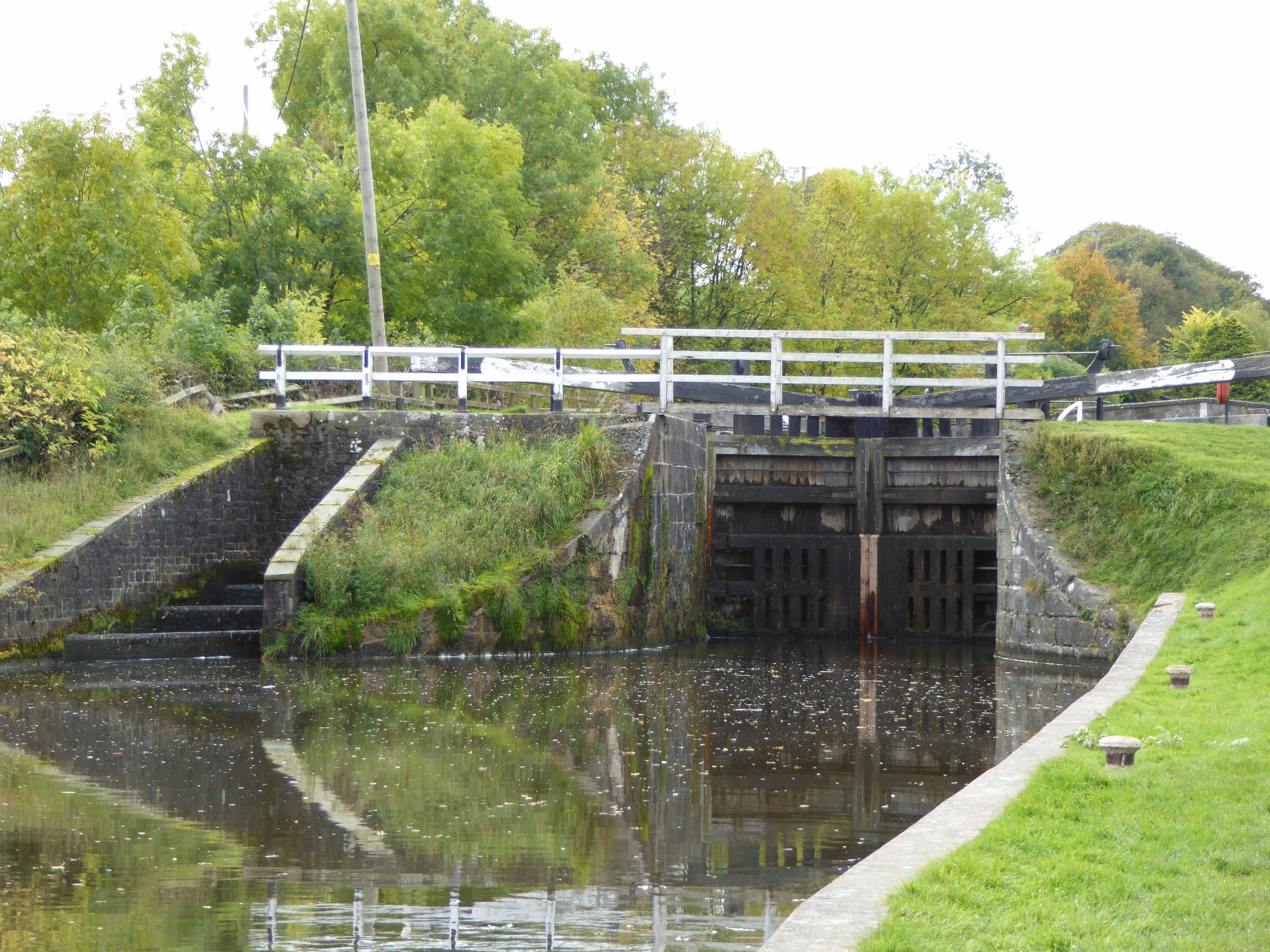 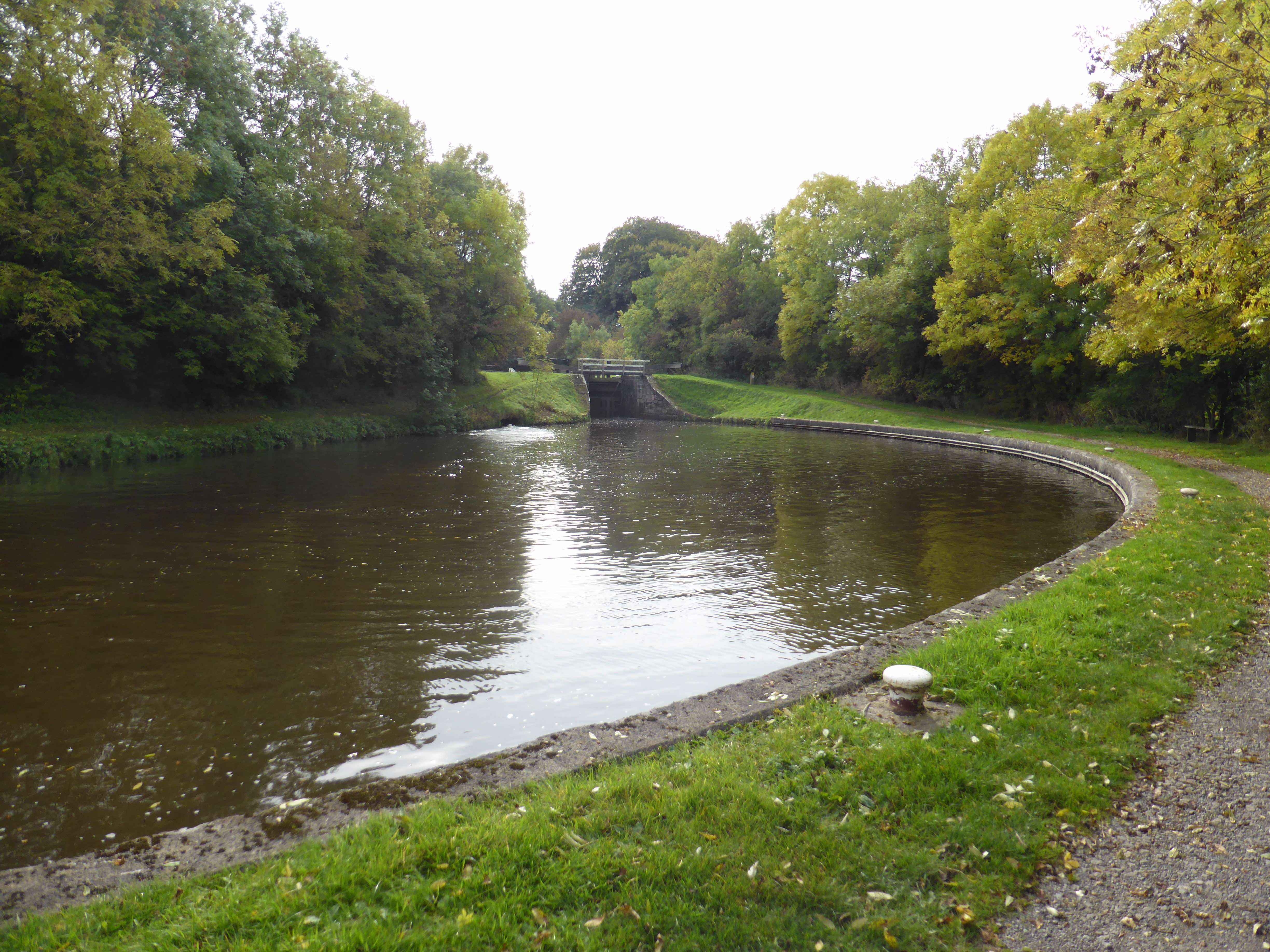 Soon after we pass a barge preparing to set off. Here the canal follows the contours of the land rather than taking a more direct route, so we meander through the countryside on a convoluted route, frequently getting views of a TV mast from slightly different angles.

As we walk we can hear the barge that set off behind us gradually gaining on us. The easy terrain means that we are probably walking at about 3.5 mph, so it takes the barge until Williamson Bridge to overhaul us. 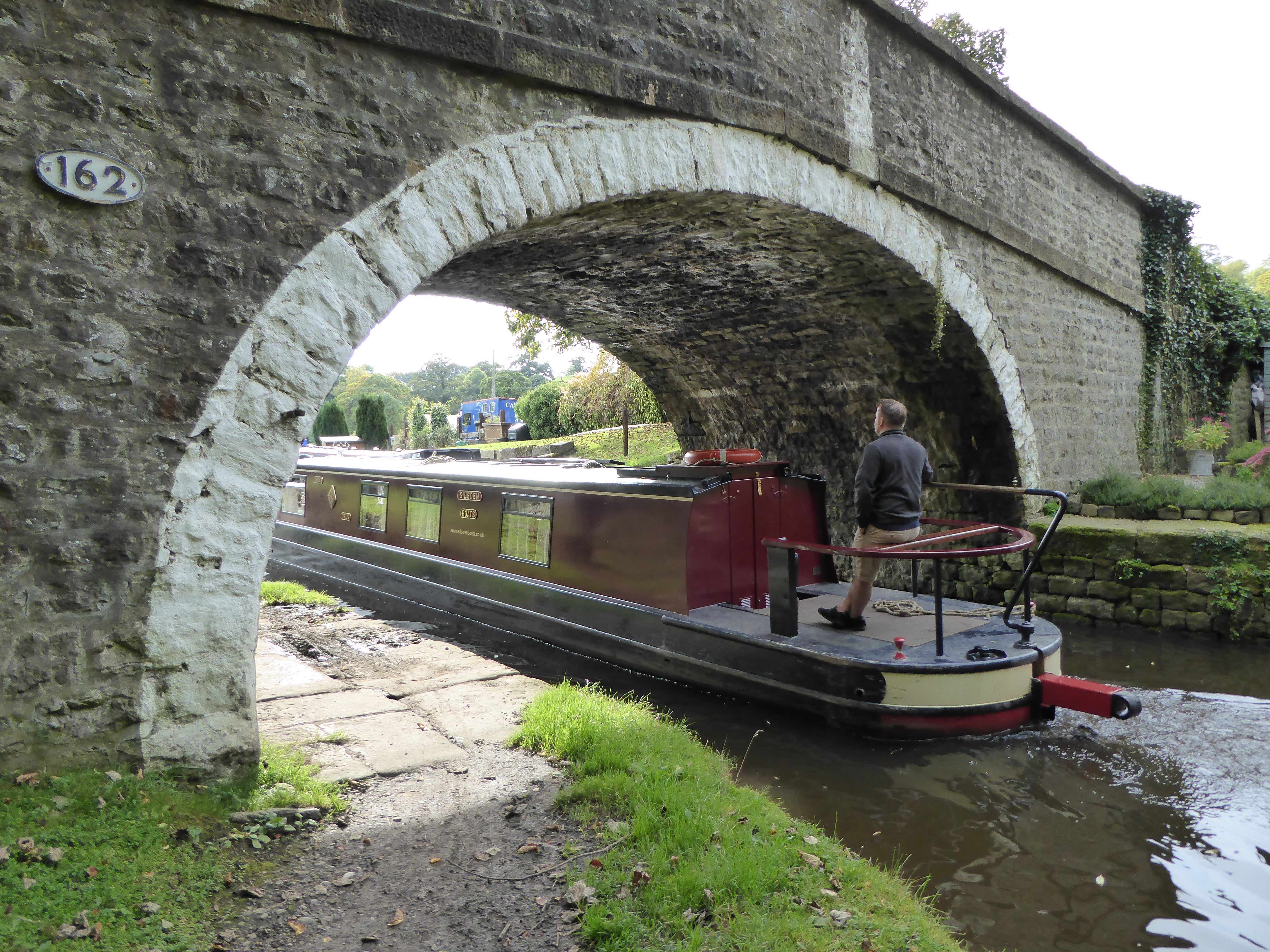 We then reach the famous double arched bridge at East Marton. A second arch was built half way down the original bridge providing extra strength. 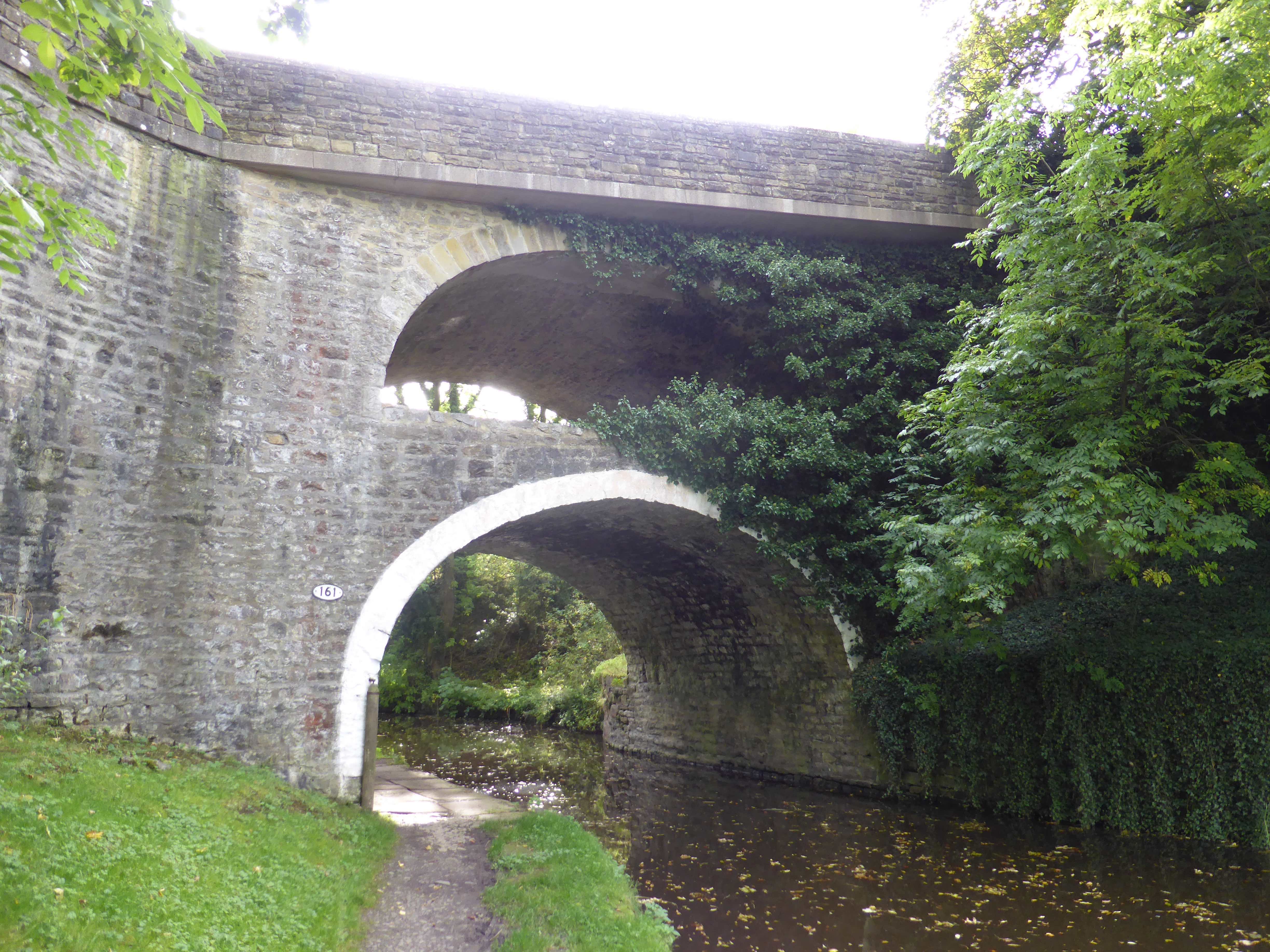 This bridge carries the busy A59 over the canal we pass under it and then at the next bridge cross the canal. This bridge is in total contrast to the previous one, set in a very tranquil, rural setting. 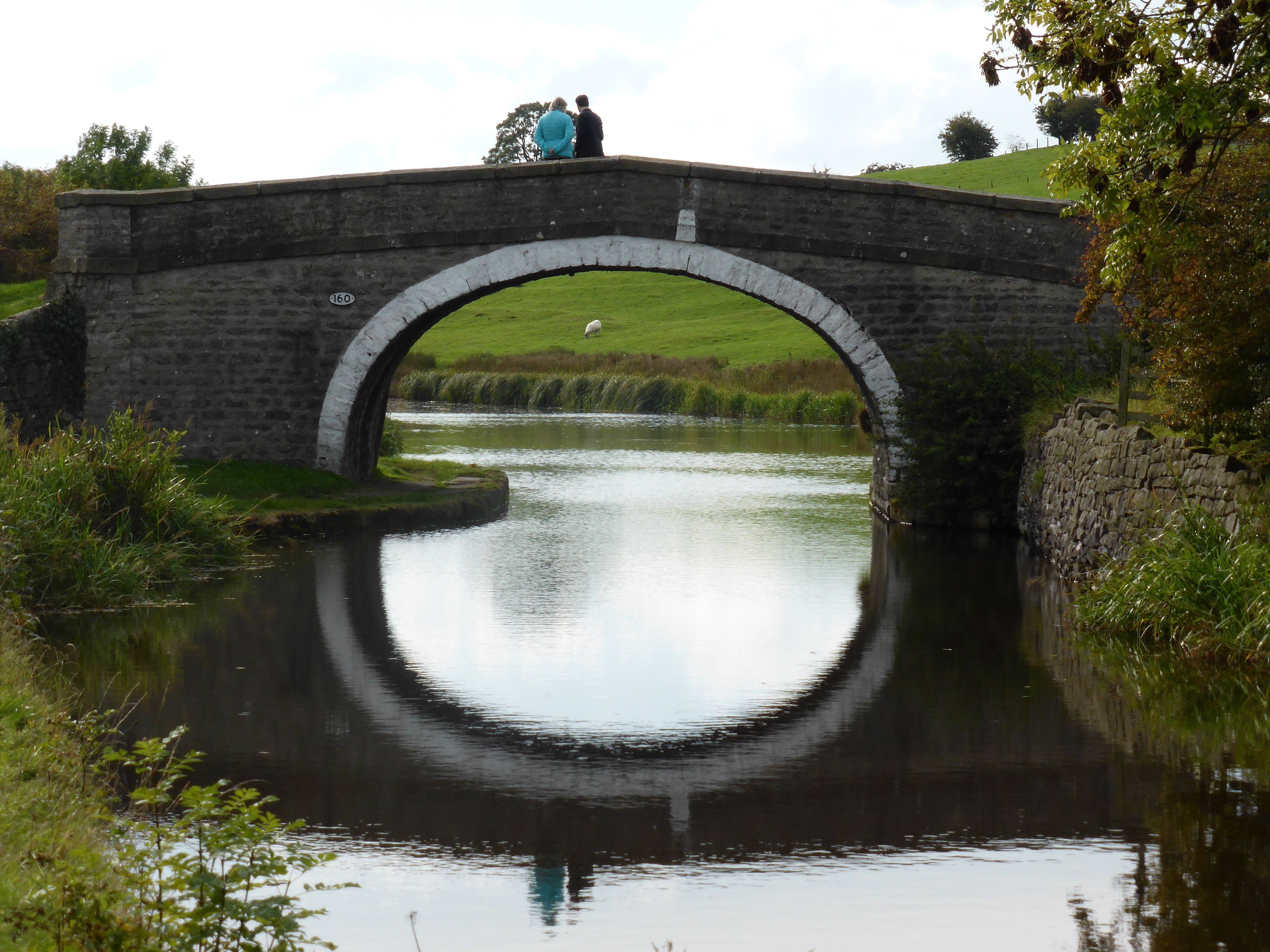 At this point we depart from the towpath to follow a footpath taking us past East Marton Church, before following a lane up to the A59, which we cross. We then take the lane besides the Cross Keys pub leading back down to the canal at Williamson Bridge, we take the bridge across the canal and follow the lane until a waymark sign for the Pennine Way directs us to open fields.

Being the Pennine Way the route is well marked and we head across rolling fields back towards Gargrave. The gently undulating path provides a pleasant variation to the earlier flat towpath. From the top of Scaleber Hill on our approach to Gargrave we get a view over the village with Flasby Fell in the background. 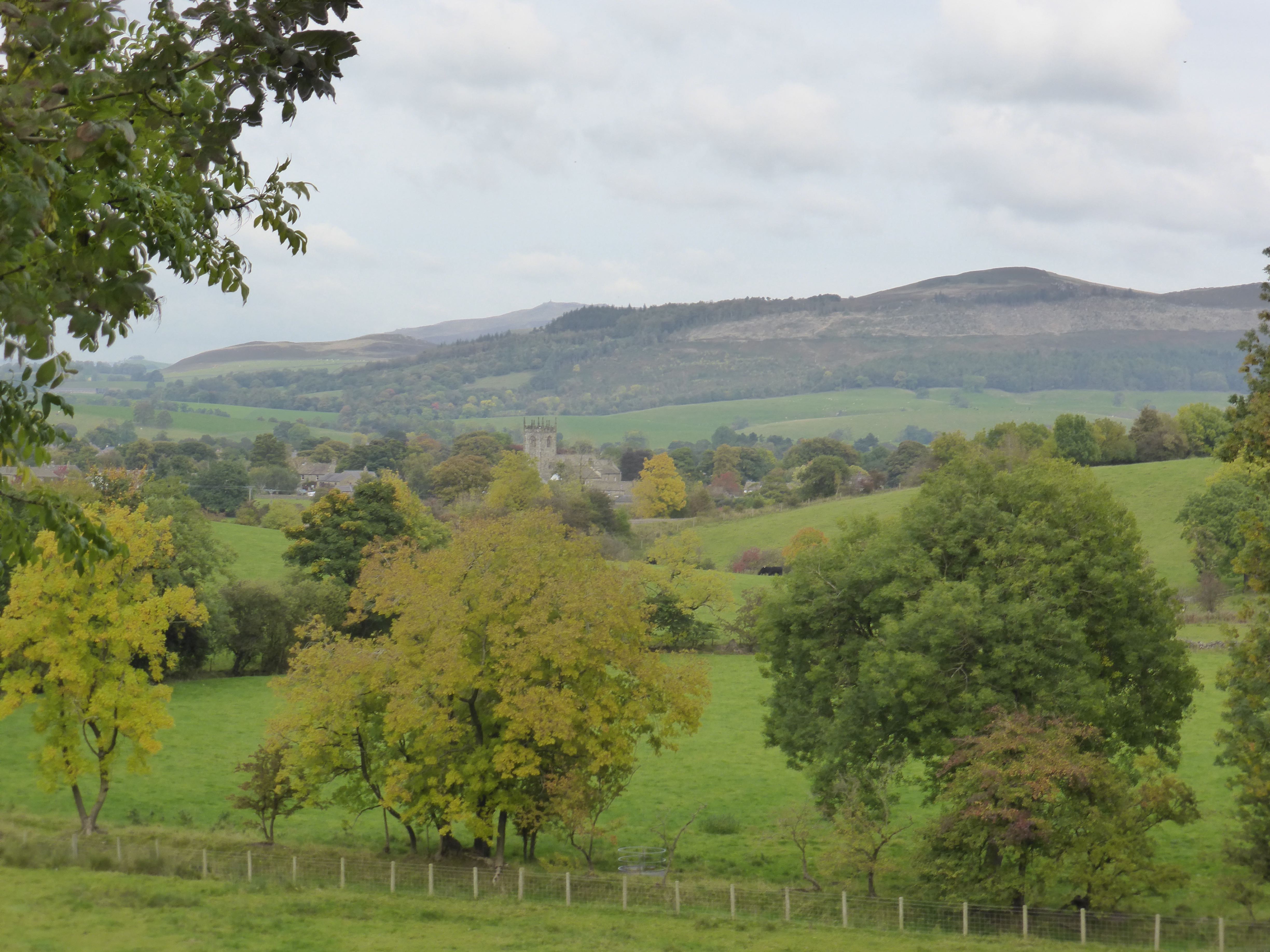 Back in Gargrave it is just a short walk through the village to reach the car park. We have walked around 7.5 miles and it has been every bit as good as I remember from all those years ago.

Back at the Unicorn we wander into Settle to make use of the Wi-Fi at The Talbot, and of course to enjoy a pint or two of fine ale. Tonight’s choice is Moorhouse’s Pendle Witches Brew, a stunning pint. I will definitely miss the Yorkshire beer when we are in the South next week! 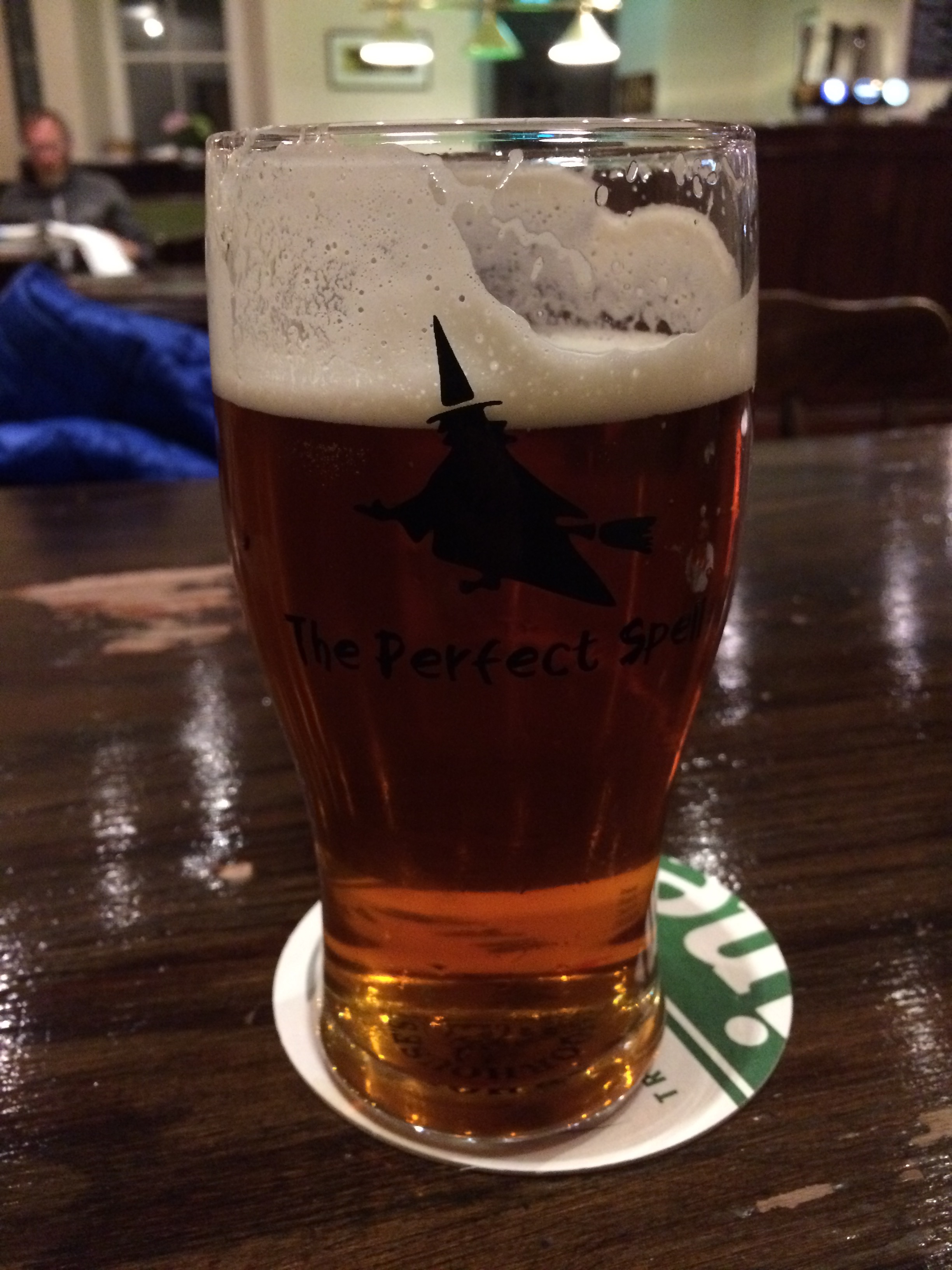