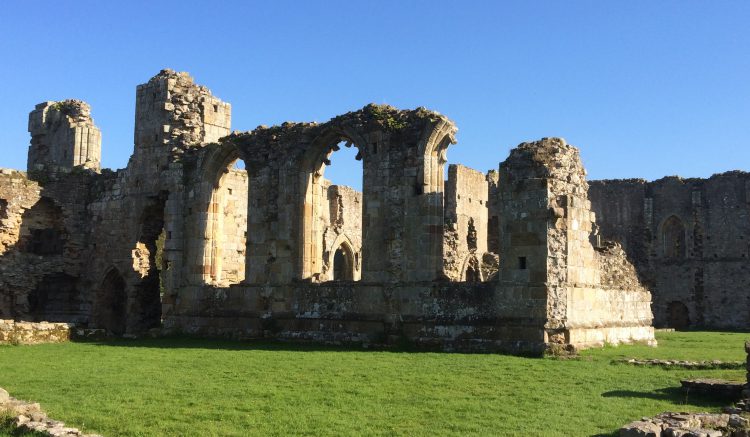 It is another stunning day, like the last few days it starts with early morning mist but the sun soon burns this off and there is a cracking clear blue sky. I have a bit of work to do so the morning is spent around the Unicorn before we head off for our daily walk.

On our trips to the George and Dragon we have been asking the locals about the must see places in the area. A strong recommendation is a trip to Easby Abbey, details of a walk from Hudswell are in the walking guide we picked up on our first visit to the pub.

We start from the gate at the bottom of the site leading onto a footpath and turn right to follow the path into another field and then along the edge of woodland with a steep slope to our left. Over a stile and across a couple of fields we go before climbing another stile and turning left at a crossroads of paths to go alongside trees to a gate where we enter Hudswell Wood.

The path descends and then goes through a gate into more woodland, and continues downhill. At the bottom we turn right and follow the footpath with the River Swale to our left. When we reach a fork in the footpath we take the right option this path follows the line of the trees and then goes through a gate into woodland. This route is above the riverside path we took a few days ago and whilst there is a slight climb it is much easier walking.

The path brings us to Richmond Bridge, which we cross and then turn right to walk along Riverside Road, a quiet lane that, as its name suggests, follows the line of the river below the castle walls. 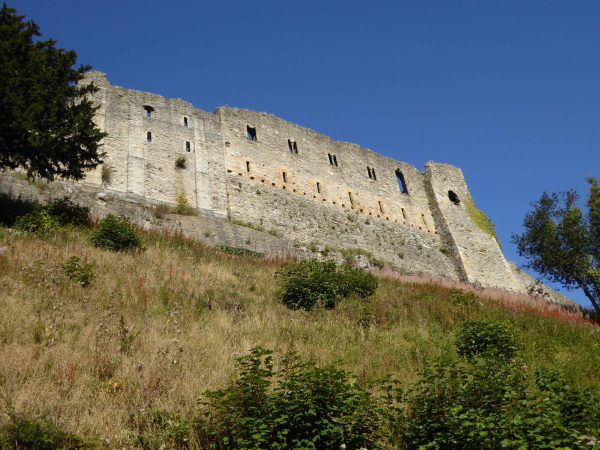 We arrive at a broad path that has stunning views back across the waterfalls on the River Swale. At the moment the river level is low, I would imagine this is very impressive after heavy rainfall. 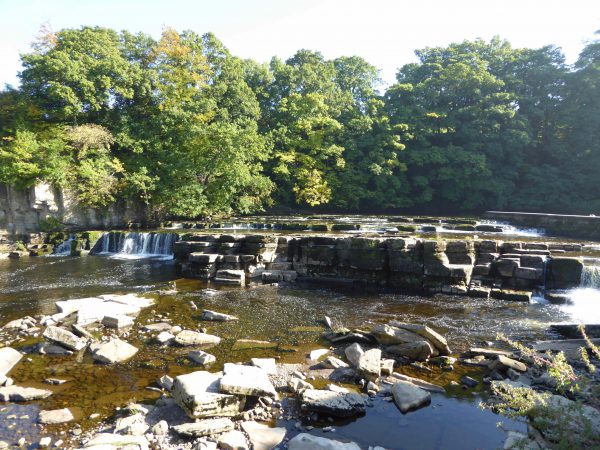 The path leads us into a park and as we walk through we get impressive views of Station Bridge. This bridge was originally built in the mid 19th century to connect the railway station with the rest of the town. It has four gothic arches and was designed by Robert Stephenson, Engineer–in-Chief of the York & Newcastle Railway and son of George Stephenson. The bridge underwent extensive renovation after heavy rains resulted in a partial collapse in June 2000. 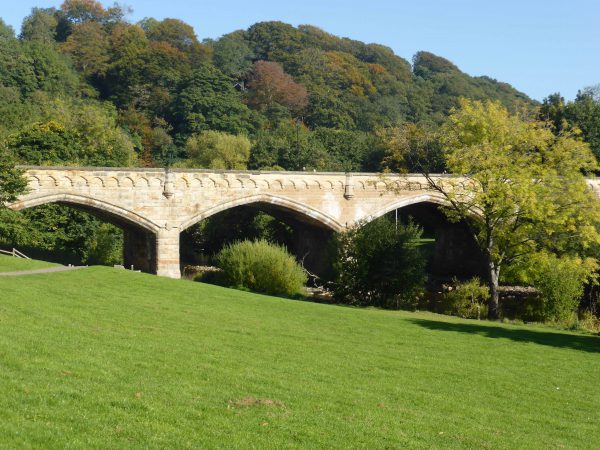 We follow the footpath under the bridge and merge with a lane that continues high above the river before descending again by playing fields. Here we have a choice of paths going either side of the Drummer Boy Stone. 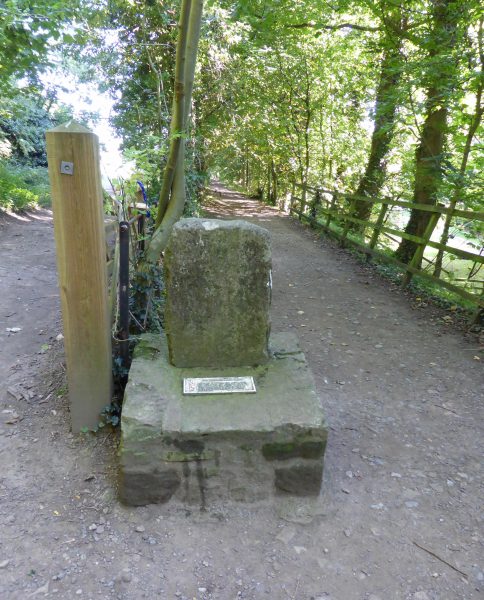 Legend has it that at the end of the 18th century soldiers discovered an opening to a tunnel under the keep of Richmond Castle. As they were too large to get into it they picked a small regimental drummer boy to be lowered into the tunnel. He was instructed to beat his drum as he walked the tunnel and those above would be able to follow his passage. They tracked him from the Castle and out of the town until they reached Easby Wood beside the River Swale. There the drumming ceased and the lad was never seen again. It is said that the stone marks the spot where the drum was last heard.

We walk through the woods and then join a path taking us towards Easby Abbey. The Abbey is said to have been founded in 1152 and the inhabitants were Premonstratensians, they wore white habits and became known as the White Canons. 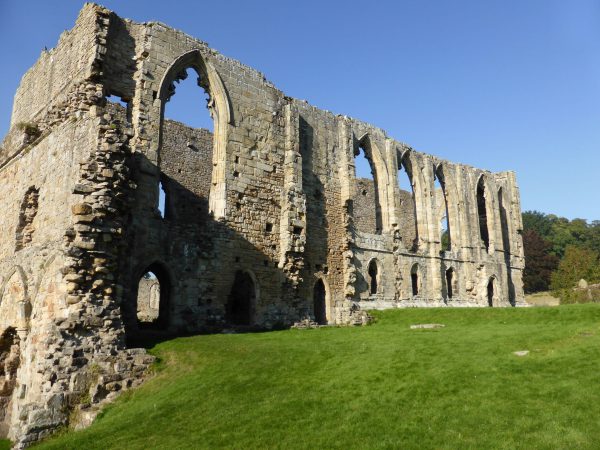 The abbey was frequently attacked by Scottish raiders and then in the 1530s fell victim to Henry VIII’s dissolution of the monasteries. Thereafter it fell into gradual decline. Today is it a fantastic tranquil spot and we are alone as we wander around exploring. 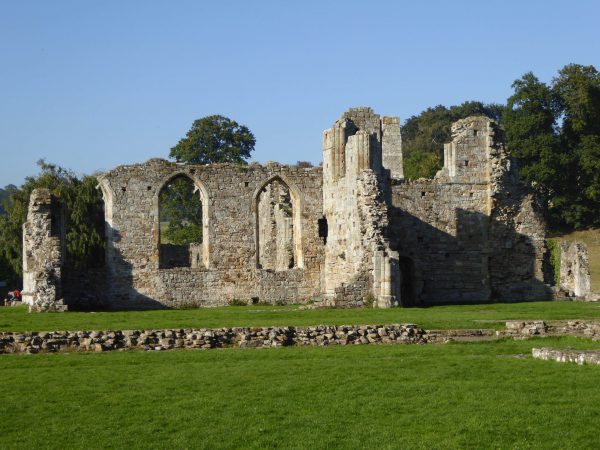 Alongside the abbey is the old gatehouse with its stunning stone ceiling. 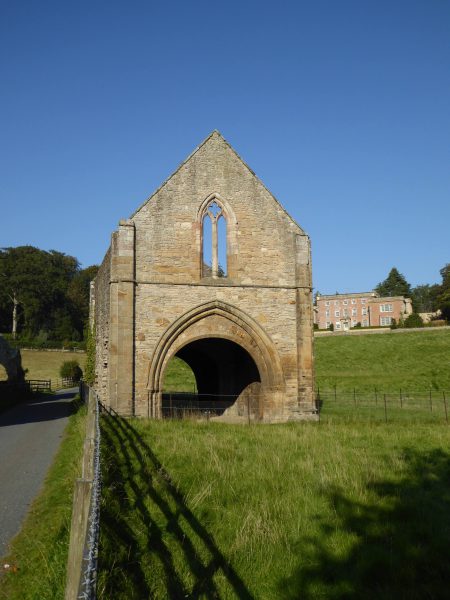 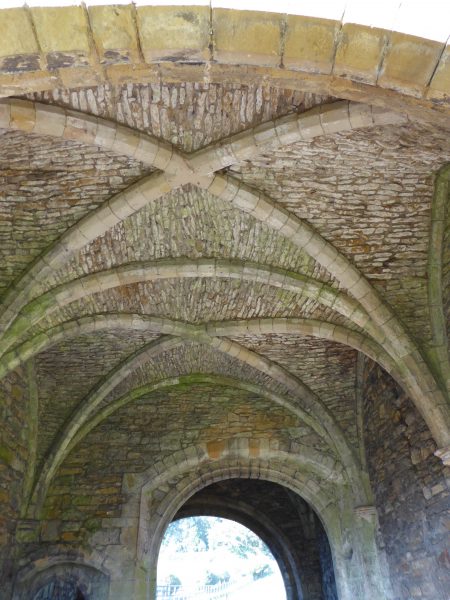 On leaving the Abbey we walk up the lane towards Easby House, but before reaching the house take a footpath on the left that gives us a great view of the abbey below us. 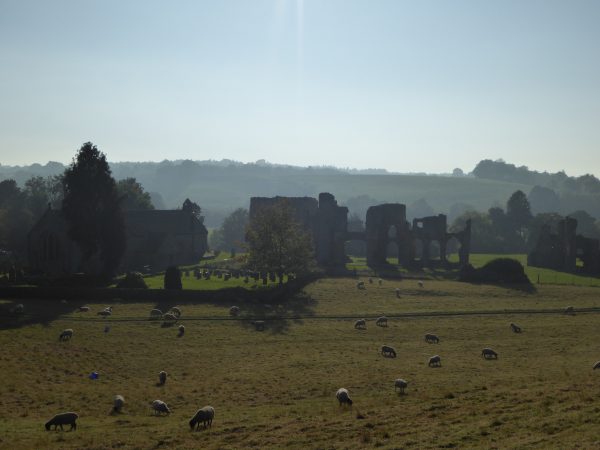 We follow this path back towards Richmond; it rejoins our outbound route at the Drummer Boy’s Stone. We retrace our steps to Station Bridge, this time ensuring we take the higher path that will allow us access to the bridge. We cross so that we can explore the old station.

Richmond Station was the terminus of the Eryholme to Richmond branch line. The line opened in 1846 and the station was fully opened the following year. The station was used until 1969, although the line was closed in 1967. 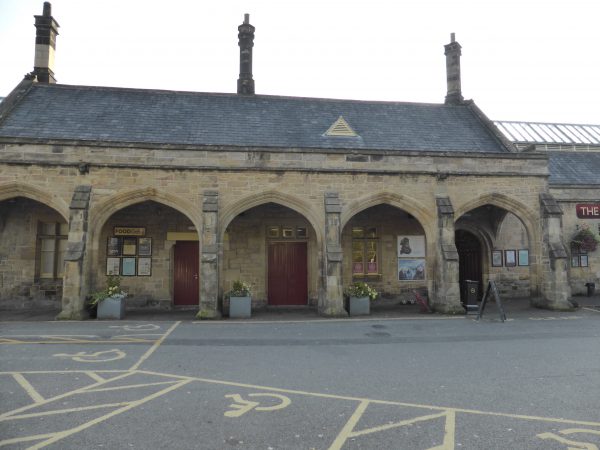 In 2003 a community based project reached an agreement with the District Council to regenerate the Station and this work has enabled it to once again be a vibrant building. It reopened in 2007 and now has a couple of cinemas, a restaurant and café, an art gallery and numerous artisan food producers. Unfortunately dogs are not allowed in the renovated building, so I wander around outside whilst Lynnie explores. I am happy enough looking at the architecture, it is a cracking building.

Our route continues back across the bridge and on the pavement besides Station Road, we turn into Frenchgate and follow this to the Market Place. We walk up the Market Place and leave by the pedestrianised Finkle Street and then turn left into Newbiggin at the end of this cobbled street we turn right onto Cravengate. Then at a junction turn left along Victoria Street. On a building at the corner of Quakers Lane and Victoria Street we spot an Automobile Association plaque saying that during the Solar Eclipse of June 1927 this was the central line of totality. 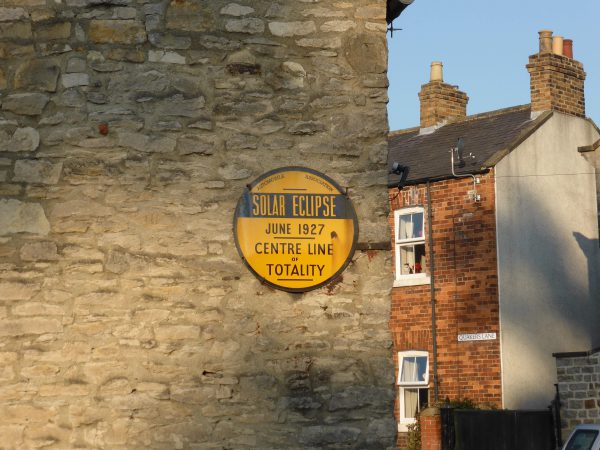 We continue along Victoria Street before turning left into Reeth Road, which we follow until we turn into Mill Lane on our left. At the end of Mill Lane we turn right to follow a path through a static caravan site. This eventually emerges into a car park with a bridge over the River Swale into Hudswell Woods. On crossing the bridge we retrace our steps back up through the woods to Scar Close CL.

We have covered almost nine miles, and have wandered from the routes in the guidebook to have a bit of a jam about. A thoroughly enjoyable afternoon further improved by a trip to the George and Dragon in the evening to check on the Copper Dragon. I am pleased to report it was in good order. Cheers!

[To follow our walk you will need Ordnance Survey Explorer Map 304 – Darlington and Richmond].