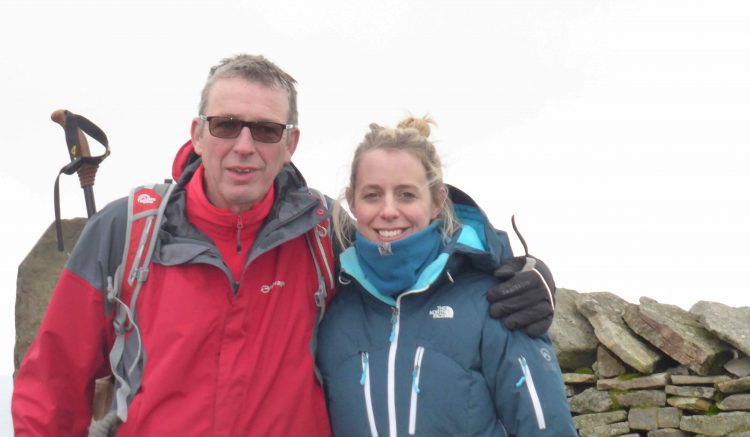 There were several reasons why we decided to return to Settle again this year, one of which was that Lolly wanted to catch up with Maurice, Jane and Carl. So when she said that she had a few days holiday to take and wanted to join us in the Unicorn it was soon agreed that our destination would be the Yorkshire Dales.

As I have mentioned previously when Ben and Lolly were young we often holidayed in this area, but it is many years since Lolly was last here.

Our family holidays here always involved walking, even when the children were small. Ben was about seven the first time he and I went up Ingleborough and a few years later Lolly was about the same age when she reached the top for the first time.

Returning to Settle from picking up Lolly late last night at Skipton station I suggest that a trip up Ingleborough the next morning is called for, however, Lolly requests a walk up Whernside. She says it is the only one of the peaks that she has not climbed, so we need to rectify that.

We drive to Ribblehead and again park in the lay-by at Batty Green. Our walk is following the same route that Lyn and I walked last week. The wind is stronger and it is much colder. We get well wrapped up. One thing for sure it will be colder at the top than it is at the bottom. 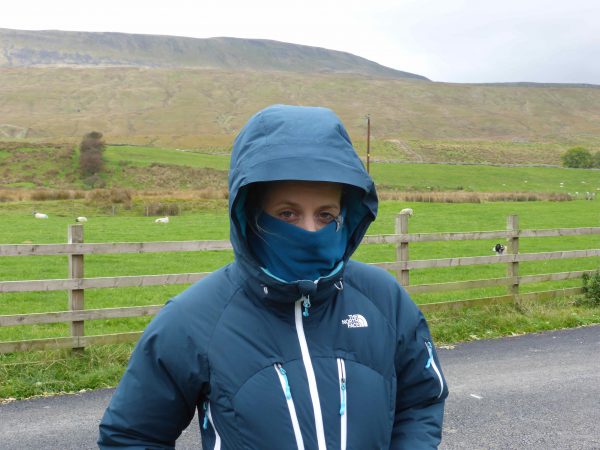 As we walk Lolly seeks assurance that we will not encounter any bears, I have warned her that we might meet some early on but after that it will be bear-free walking. Fortunately as we pass through the field the bears are on the far side and show no interest in the dogs or us.

As we climb the steep side to join the ridge, Lolly’s fitness and youth shows and she and Dexter get there first. Crosby and I are not far behind and Lynnie watches her two walking companions and dogs disappear over the horizon. Naturally we stop and wait for her! 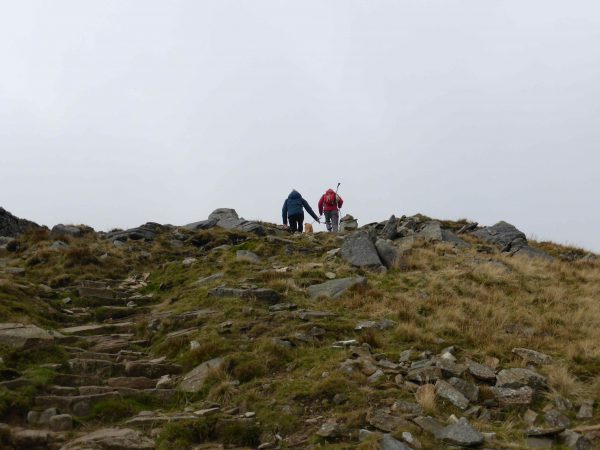 Our walk along the ridge to the summit is straight into the wind and it is certainly bracing. It was only five days ago that Lynnie and I were at the top, but the temperature is so much lower it could easily have been months ago. To me that’s the beauty of walking in this area the weather varies so much from day to day (and sometimes during a day!). 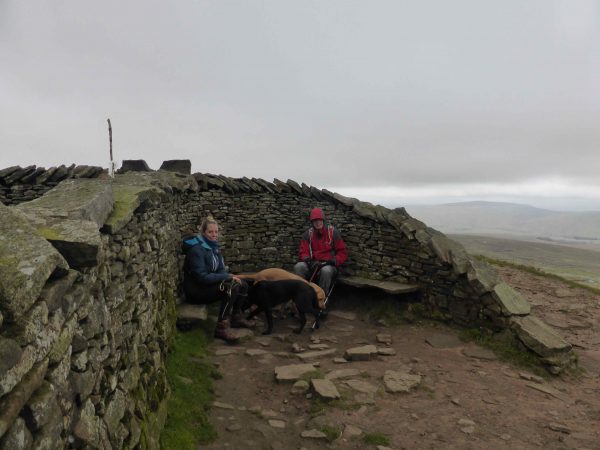 After a brief stop in the shelter at the top to eat a sandwich, we head back, stopping to look at the waterfall at Gill Force. In the few days since our last visit there is less water flowing but it is still an impressive sight.

Our next stop is on the aqueduct and a look up the track to the Blea Moor Tunnel. This is the longest tunnel on the Settle to Carlisle railway at 2,629 yards (just short of 1.5 miles). It was completed in 1875 and took almost five years to construct. The tunnel passes 500 feet below Blea Moor. An amazing engineering achievement, the construction required seven shafts being sunk into the moor. Four of these were subsequently filled in but three remain as ventilation shafts.

Back at the car we decide to head to Hawes. Lolly reminds us that on a previous visit to this attractive Dales town she was stung by a wasp (and then to her continued annoyance stung again the following day!). But there are two particular reasons for going there today. First I want to visit the rope factory to purchase new dog leads and secondly, (and probably more importantly) we all want to visit the Wensleydale Creamery.

I drop the girls at the Creamery and make for the rope factory. Rope making in Hawes goes back to the 19th Century. Apparently it began in 1841 with the Wharton family, in 1905 John Wharton sold the business to William Richard Outhwaite. The Outhwaite family sold the business to the current owners Peter and Ruth Annison in 1975. Over the years we have visited a number of times and it is interesting to see how the ropes and other products are made. Years ago I purchased a long dog lead, and need to get another. I am fed up with Dexter and Crosby wrapping their extendable leads around my legs when we are walking.

Back at the creamery I meet the girls and take a tour of the tasting area. I do like cheese and Wensleydale is a favourite, in particular I have a taste for their Kit Calvert Wensleydale. A cracking cheese Gromit!

Later we meet with Maurice, Jane and Carl for a fun evening at the Talbot Arms. I do like their pies and an added bonus is a choice of Moorhouses’ “Blond Witch” or Three Peaks Brewery’s “Whernside”. Of course, in the interest of research I have to try both!