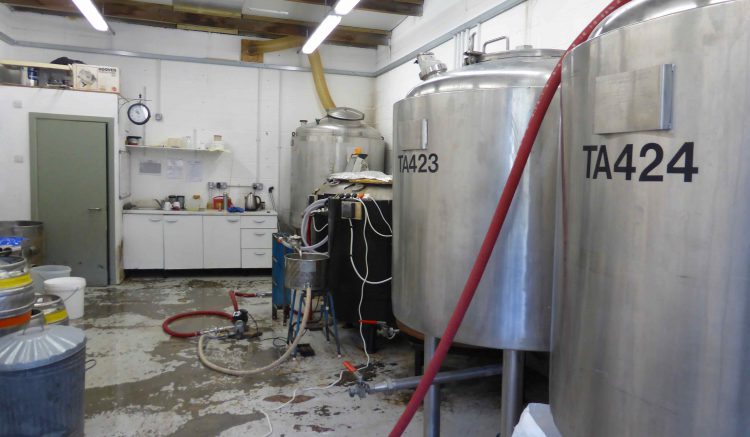 You may recall that when visiting The Talbot Arms on our arrival in Settle last weekend I got into conversation with some locals and was invited to visit the Three Peaks Brewery on Saturday morning. I did not need asking twice!

Remarkably I have never been on a brewery tour, a number of years ago when working in Liverpool I was tempted to tour the Cains Brewery, but the timings never fitted with work commitments. More recently there have been excursions from my local in Pitton, The Silver Plough, to the Hall and Woodhouse Brewery in Blandford Forum. However, these were always on a midweek evening and for a man getting up at 5.30 to commute to London, a midweek session was out of the question. Today’s tour is far less formal. Just turn up on Saturday morning I was told.

The Three Peaks Brewery is situated just outside of Settle on the B6480, it sits under Giggleswick Scar at the brow of the hill in what used to be known as Scar Top Garage. Colin, the head brewer, founded the brewery in 2006 as a hobby, initially he brewed in the cellar of his house in Craven Terrace, Settle. More recently demand has meant that he needed additional space to expand output so he has set up in the old garage.

The brewery produces forty-five barrels a week (seventy two pints to the barrel) that’s over 3,000 pints! There are three brews Ingleborough Gold, Penyghent and Whernside, these are sold to half a dozen or so local pubs in the area.

During the week I had picked up a copy of the Keighley and Craven Branch of CAMRA’s newsletter “Alesman”. It said that if you want to taste the Three Peaks ales you should go to the Red Lion (Earby), the Craven Arms (Giggleswick), the Golden Lion (Horton), the Traddock (Austwick), the Helwith Bridge Inn or my favourite the Talbot Arms in Settle.

Colin and his colleague Andrew explain the process from start to finish and I am invited to taste the hops. Unfortunately this is prior to them going through the brewing process. This is obviously not a large commercial brewery, the focus here is on producing quality ales.

To ensure that the hard work put into the brewing process is followed through to the end product served to the customer, Colin and Andrew regularly visit each of the pubs selling their ale. The quality control part of the process is something that I would happily take on, I would even be prepared to do it on a voluntary basis, but of course I would want free beer!

After bidding Colin and Andrew good luck in their venture and promising to seek out more of their ale to sample I head off towards Clapham, the starting point of my walk up Ingleborough.