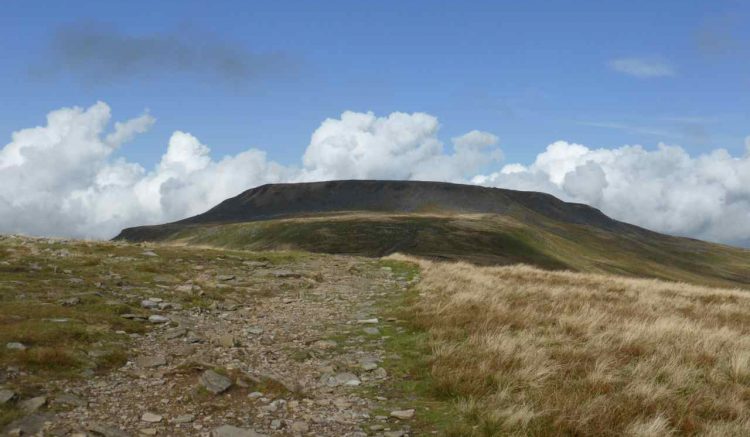 In my humble opinion there is no better walk than climbing Ingleborough from Clapham. It is a walk that I have done many times, but not in the last few years. Recently my annual ascent has been via Horton in Ribblesdale. So after my tour of the Three Peaks Brewery I drive to Clapham and park in the Yorkshire Dales National Park car park. There are spaces on the road in the village, but since my last visit, signs have been erected requesting visitors use the car park.

Leaving the village the route enters the Ingleborough Estate Nature Trail, there is a machine to buy a ticket for the route through the estate. Years ago when we first did this walk you started alongside the sawmill and dropped your money into an honesty box.
The path quickly rises and then is level as it passes the man-made lake on the Estate. This was created in the 19th century to provide drinking water to the village and drive the water turbine installed to provide electricity for some grand properties, the church and street lighting.

This place is special to me, the walk from Clapham through the Estate to Ingleborough Cave was one of my mother’s favourite walks and she encouraged me to walk this route years ago with Lynnie, Ben and Lolly. 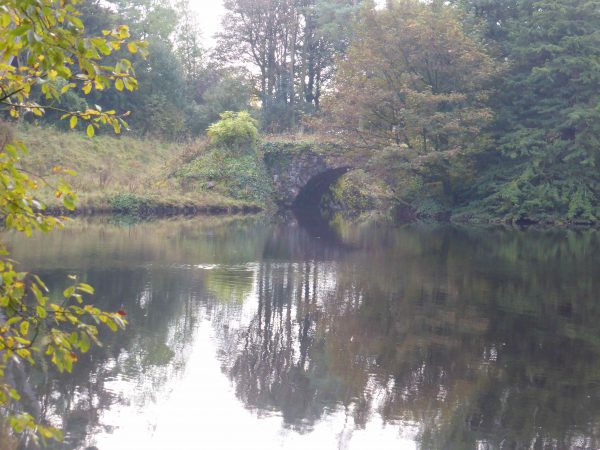 The area around the lake abounds with a wide range of trees, in particular rhododendrons. These were planted by botanist Reginald Farrer (1880-1920), Farrer’s family still retain ownership of the estate. 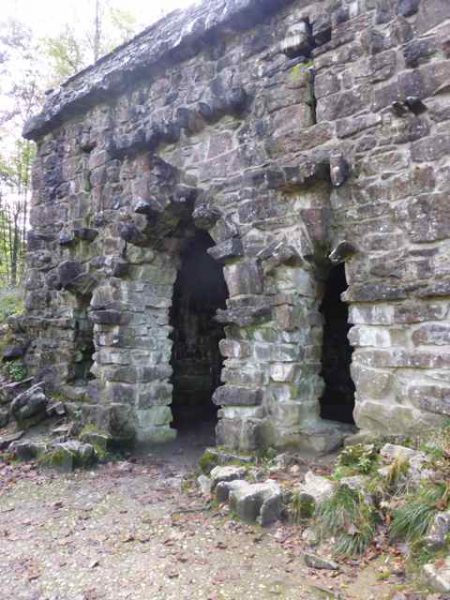 It is an interesting path, soon I reach The Folly, always a favourite stopping point for Ben and Lolly on our excursions here. At this point you are high above Clapham Beck, but after going through a gate the path soon follows alongside the beck to Ingleborough Cave. This show cave is open to the public and apparently allows access to a 500 metre passage. Regular blog readers will know I am unlikely to venture inside. 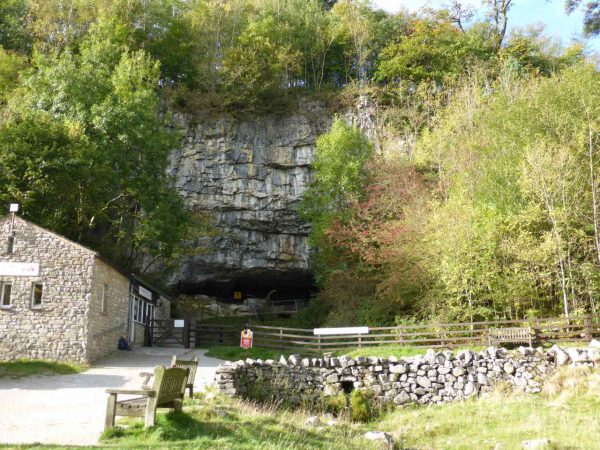 Alongside the cave, water emerges from the rock face. It has come off Ingleborough into Fell Beck and then fallen into Gaping Gill. The waterfall from Fell Beck is the tallest unbroken waterfall in England with the water falling 322 feet, however to see it properly you have to descend into the pothole, (another spot where you will never find me.) There is still some serious walking to do before I get to Gapping Gill. 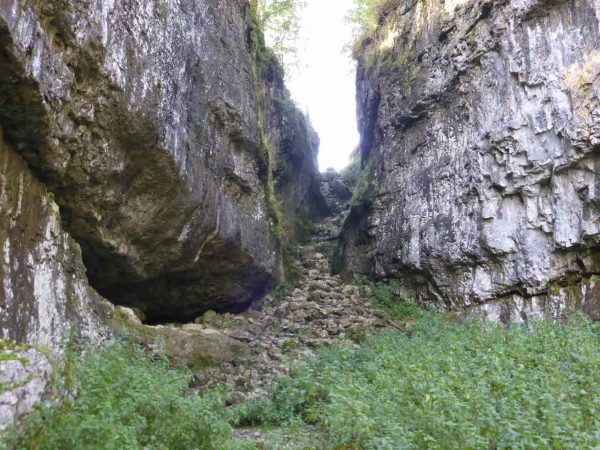 First is the climb through the dry gorge of Trow Gill, this is a cracking spot and another favourite with Ben and Lolly in their younger days. They loved the clamber up through the rocks. Arriving at the top there is a steady ascent through the rock strewn path. The last time I walked here the route led to a pair of high ladder stiles. On that occasion Dexter was at his most obstinate and I got absolutely filthy lifting a wet Labrador up and over. For this reason I have favoured the route from Horton in recent years. Now wall gates have replaced these stiles, much easier access for both two and four legged walkers. 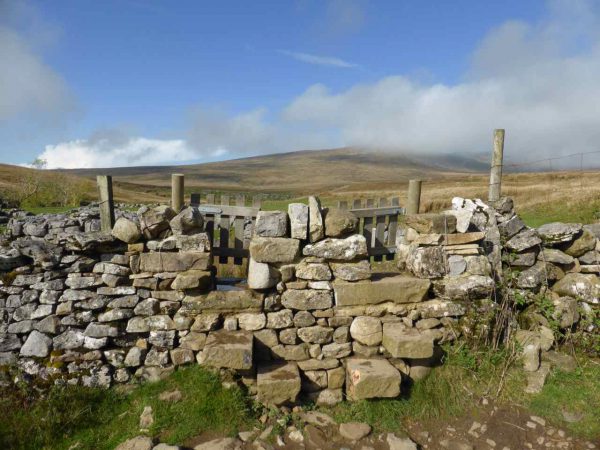 We are now heading towards Gapping Gill, but shortly before reaching this huge pothole we fork left to follow the path to Little Ingleborough. This is a long steep climb, I usually stop several times to regain my breath. But today after a summer’s good walking I manage the ascent in one go, on route passing a number of younger, fellow walkers.
From the peak of Little Ingleborough the well-defined route follows the ridge before the final ascent to the top. My Mother’s dear friend Phyl used to live nearby in Ingleton and always said that I should wave to her when I reached the top. Sadly Mum and Phyl are no longer with us, but I still give them both a wave. They would have loved to hear about our summer of travel. 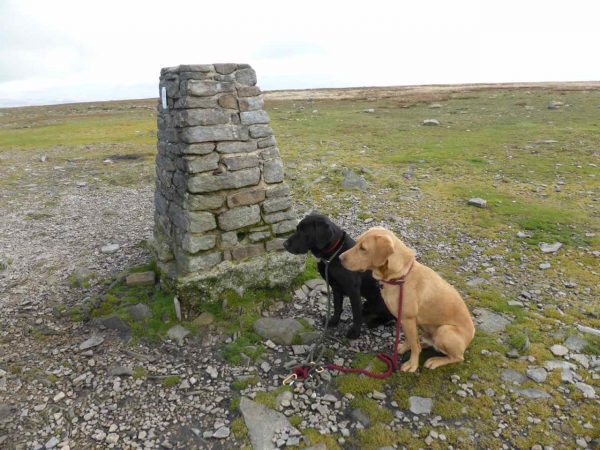 The boys pose for pictures at the trig point before we head off in a northerly direction. From here we get a stunning view of the Ribblehead viaduct. We take the Three Peaks path towards Horton, a long steady descent with cracking views of Penyghent in front and a short but spectacular section of limestone pavement. At a cross roads of paths I turn right towards Clapham, taking particular care to give a herd of bears in front of me a wide berth. After going through Sulber Gate I walk alongside the stunning Crummack Dale. This is limestone walking at its best! It is no surprise that the route that I have taken since leaving Clapham is said to have been described by Wainwright as the finest walk in the Dales, who am I to disagree. 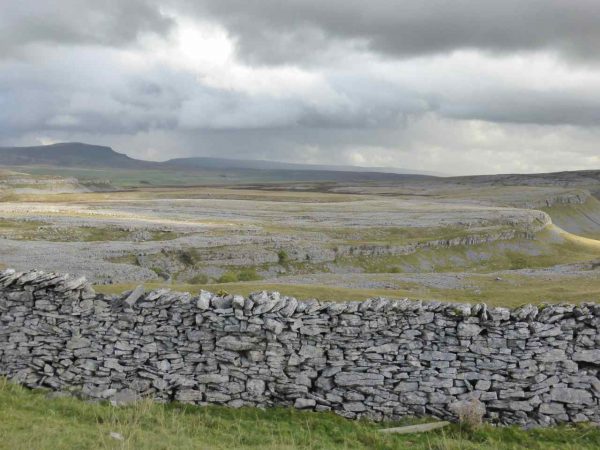 The path is easily followed (but a map is recommended because there are a number of paths leading off the main route) and heads towards Thwaite Scars, eventually reaching the end of Long Lane. Usually I follow the lane back to Clapham. However, today with the sun shining I decide to head back down to Ingleborough Cave and follow the nature trail back to the village, along the way stopping to reflect on the beauty of this spot.
As I re-enter Clapham I stop at the viewpoint to look at the waterfall, I cannot recall seeing so much water cascading through, a spectacular view and a fitting end to a cracking walk. 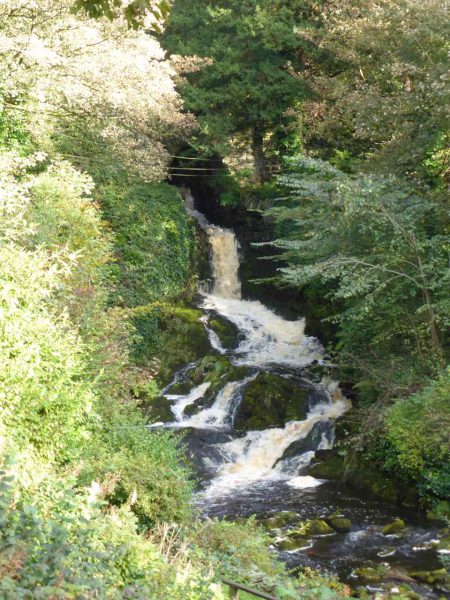 Later Lynnie asks if I would ever get fed up with walking up Ingleborough, the short answer is no. It is a walk I could do every week and still find fascinating. For me a walk to the top of Ingleborough cannot be bettered.