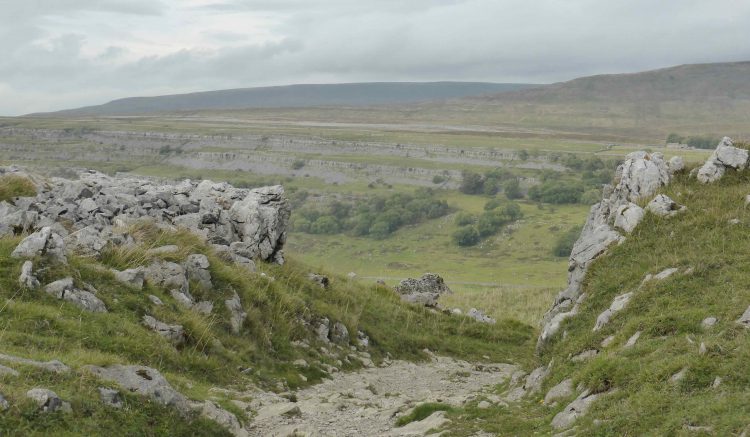 There is always something special about walking in the Dales and I could never tire of any walk that provides a view of Ribblehead Viaduct. As regular followers will know Lynnie and I have walked in this area for years, but we continually find new footpaths and areas to explore for the first time.

Today we drive out of Settle and head along the Ribble Valley through Horton-in-Ribblesdale until we reach Ribblehead, here we turn left and head towards Ingleton and park in a lay-by a few hundred yards before the Hill Inn, which comes shortly before the turning to Chapel-le-Dale. 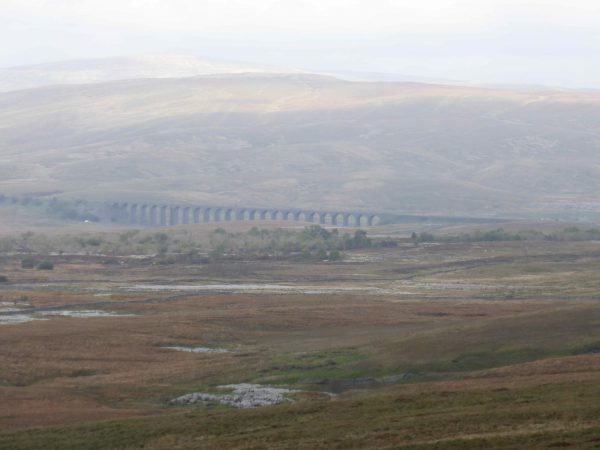 We are going to explore the area below Ingleborough that is reported to have spectacular limestone pavements. I walked part of this in June when I walked the Three Peaks, a memorable day that I plan to repeat annually for as long as I am fit enough to do so. On that day I chose to take a slight diversion to the normal route (adding distance!) and go around Great Douk Pot Hole. Later that evening I promised to take Lynnie to see it next time we were in the Dales. So today is the day!

Rain is forecast, but it is fine, albeit overcast and a bit chilly, compared to the weather we have recently left in Somerset. We cross the road and take the footpath that leads us parallel to Keld Bank, we soon stop to look at the limekiln adjacent to the path. This is a fine example of the many limekilns that litter the Dales, but from our experience it is unusual to encounter one so close to a path. 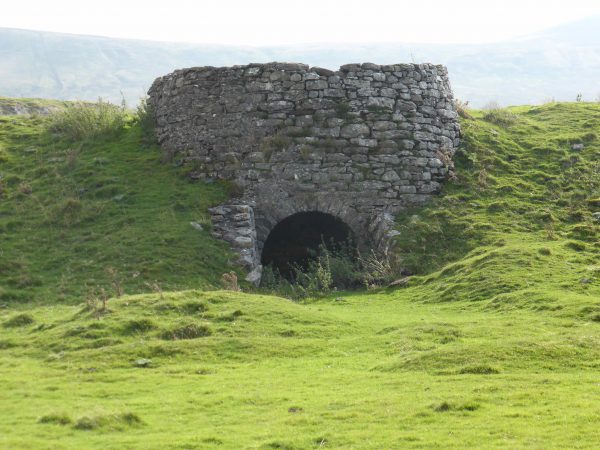 This is easy walking across level ground, there is evidence of bear activity, but no sign of a likely ambush so we stride on, relaxed and enjoying being back “on tour”. Passing through a gate we come to a junction of paths, we turn left towards Great Douk and walk through the limestone outcrop. Soon, emerging in front of us is the dry stone wall that surrounds the huge depression that gives access to Great Douk Pot.

I have never been tempted to go caving. Years ago when Ben and Lolly were small we went on a guided tour of White Scar Caves, situated a couple of miles further along from here towards Ingleton. It was interesting but reinforced my belief that I would rather walk above ground than be under it! Apparently Great Douk Cave is popular with beginners to caving and cavers can be underground for 600 yards in shallow caves (but still underground!) before emerging further up the hill.

We follow the footpath above the caves towards the small outcrop of limestone pavement. At the junction of paths just after a dry stone wall we continue straight on. In June I turned left here and made the steep ascent to the path just below Simon’s Fell. Today’s route is much easier. In just over half a mile we meet another junction of paths and turn left to walk towards Ingleborough. 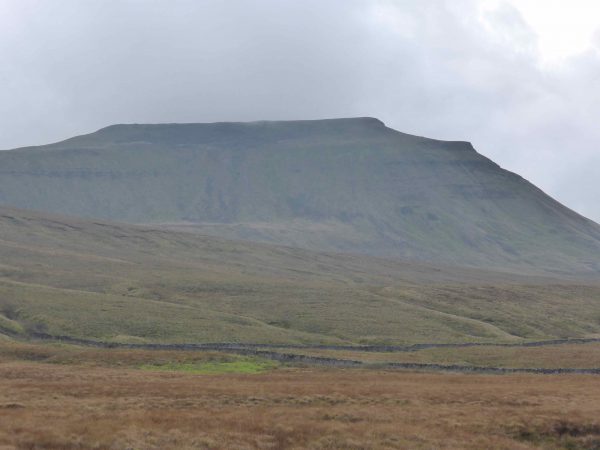 We have joined the Three Peaks Path and follow this across the boggy area, which has raised pathways. We are gradually climbing with the occasional steep section. As we head towards Ingleborough it becomes shrouded in cloud. The top of Ingleborough is one of my favourite places in the world, but there is no way we are going up today. Firstly, it is far too cloudy and secondly (and more significantly) this is the steepest ascent to the top of the peak. I have seen enough to know that this is not a route I am going to tackle with the dogs, so we agree to turn around and head back down. 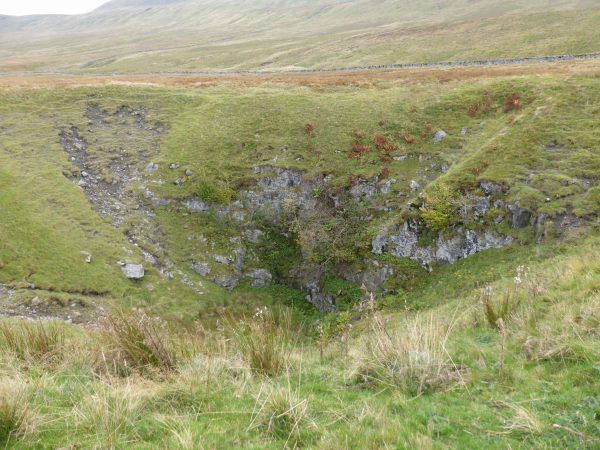 We retrace our steps over the walkways and at the junction of paths we follow the Three Peaks route straight ahead. This takes us by the spectacular Braithwaite Wife Hole, before entering the area of limestone pavement. This is a fine example of limestone pavement, it is amazing how over the centuries the rocks have been exposed and eroded. It is easy to take for granted but rewarding when you stop, look and wonder who else would have passed this way over the years.

As we descend we leave the Three Peaks Path to visit Chapel-le-Dale. On the way we meet a ladder stile and Dexter does his usual trick of sitting on the top waiting to be lifted down. 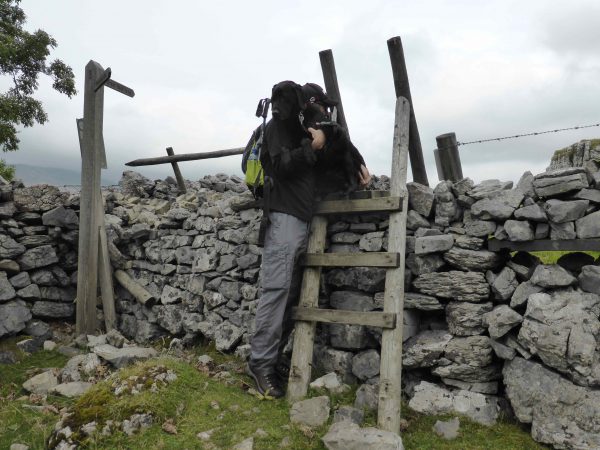 Readers of the blog may recall that it is this graveyard at Chapel-le-Dale Church where more than two hundred people killed during the construction of the Ribblehead Viaduct are buried. Around one hundred navvies were killed on site, but another hundred men, women and children died of smallpox and other diseases in the shantytowns set up in the shadow of the viaduct. There are memorial plaques inside the small church and graveyard to those that lost their lives. This is a moving place to be, difficult to imagine what it would have been like back in the early 1870’s. 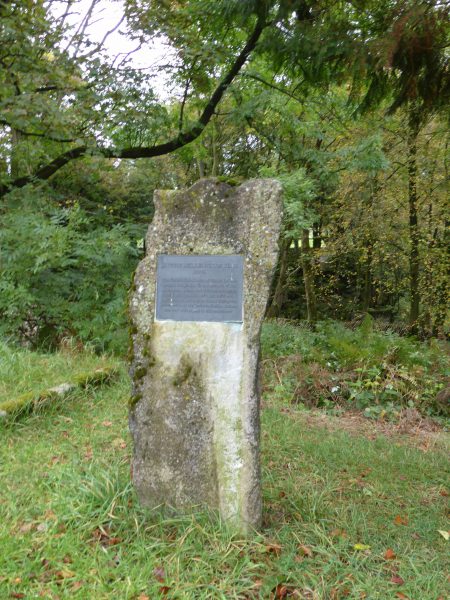 As we stand in the churchyard it starts to drizzle, we know there is only one thing worse than a wet Labrador in a caravan and that is two wet Labradors, so we head swiftly back to the car walking carefully along the side of the road for half a mile or so.

Before returning to the Unicorn we drive to Ingleton to visit the Ingleton Pottery, a small family run business established in 1971, their website states they are the oldest working pottery in the Yorkshire Dales. It is an interesting place, from the small show room you can watch the potters at work making their hand thrown Stoneware pottery. Over the years we have purchased lots of gifts for family and friends and once again we do not leave empty handed.

In the evening we take the short walk to the Craven Arms to meet our friends Maurice, Jane and Carl. This is the first time we have visited the Craven Arms and it is an excellent pub / hotel. The first thing I notice on arrival is that they are serving Three Peaks Brewery “Ingleborough”; I have to taste one before the brewery visit on Saturday. It is a cracking pint.

We have a wonderful meal and a good catch up. Maurice has just returned from Spain, still the ‘gad about’ in his late eighties. Whilst in the restaurant we can hear singing and folk music drifting in from the other bar. The Three Peaks Folk Club meets in this pub. Lynnie and I stay on after our friends have left and are treated to some cracking songs, including one led by Mike Harding the famous comedian / folk singer and broadcaster. Back in the 1970’s he was known as the Rochdale Cowboy and I had a couple of tapes of his stand up show. Some of his phrases have become part of my vocabulary, including his “I’ve had eleventeen pints” to describe a particularly good night out. I hasten to add that these days more than three usually counts as eleventeen! Especially when I am accompanied by the ‘unit police’! Cheers. 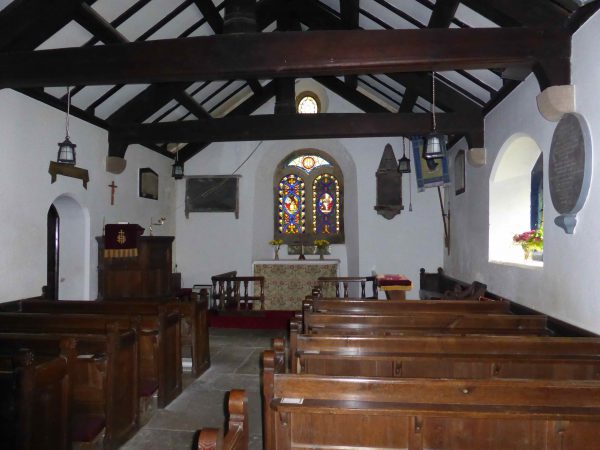