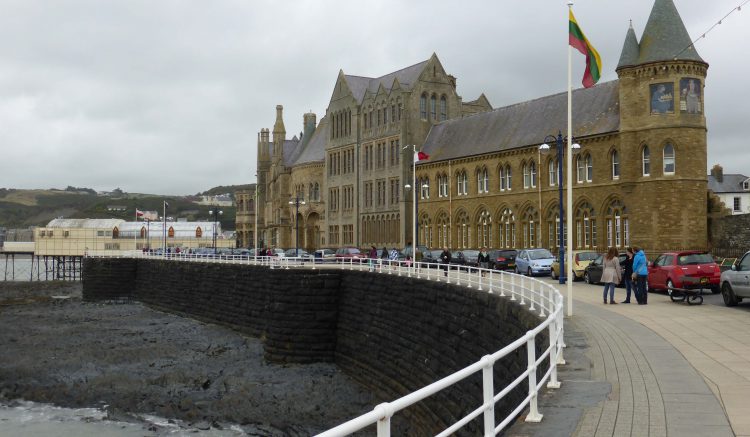 The weather is still unseasonably cold and Lynnie is struggling to find any dry footwear so our walk has to be carefully planned. We decide to take a walk from Aberystwyth that should hopefully avoid muddy tracks.

We are fortunate enough to find a parking space on the promenade (four hours free!) and start by walking towards the Royal Pier. Opened in 1865 this was the first pier in Wales, designed by the noted pier engineer Eugenius Birch it was originally 794 feet long. It is now somewhat shorter due to storm damage. 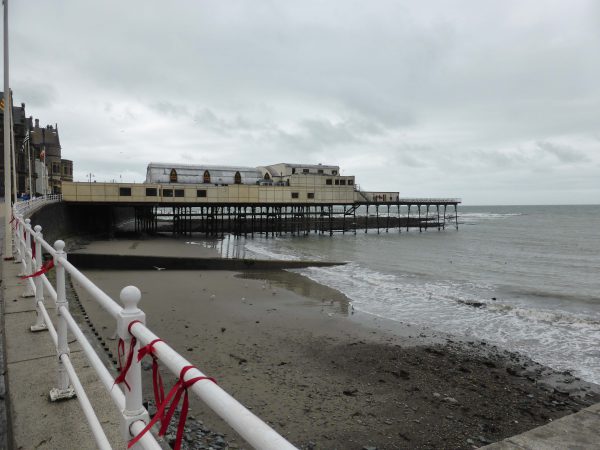 Apparently on the opening day, Good Friday 1865, it attracted 7,000 paying visitors, an impressive number for one day. Just seven months later, in January 1866, the final 98 feet of the pier was washed away in a storm. After a change in ownership the pier was again extended and a glass pavilion added that could accommodate 3,000 people this was opened by the Prince of Wales on 26th July 1896.

On the night of 14th January 1938 a storm struck the town washing away half the pier. It remained closed until after the war and was not improved until the 1970’s. In 1979 new owners redeveloped the pier and at one time there were plans to build another pier alongside although this never happened.

We round the corner into a brisk breeze, it feels more like November than August. Our route takes us past the grand, old University buildings, the University is now situated higher on the hill overlooking the town. Further around we come to the remains of the castle and in front of it is a very impressive war memorial. It is said to be one of the finest in Britain and you can see why this might be claimed. 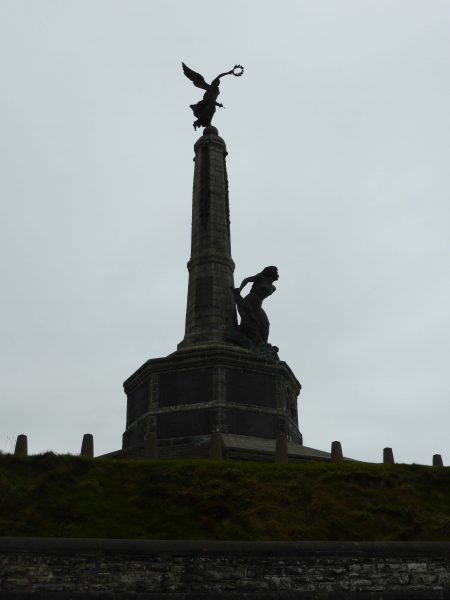 We arrive at the harbour with signs of its fishing industry intermingling with a marina for yachts and pleasure boats. This was once a busy transatlantic port, although much of its trade was with Ireland. Its commercial activity was centred on the export of lead from the Cardiganshire mines.

After exploring the harbour area we head off around the old harbour basin and walk along the River Rhiedol until we reach the old road bridge that carries the A487 across the river. Interestingly the town of Aberystwyth is located on the River Rhiedol, whereas the River Ystwyth runs a couple of miles south of the town.

After walking along the road for about ten minutes we take a footpath on the right that climbs gradually uphill to Pen Dinas hill-fort and at the summit of the hill is the Wellington monument. The monument was built in 1852 in memory of the Duke of Wellington’s victory at the battle of Waterloo. There are impressive 360-degree views from here and on this blustery late summer day we are the only ones up here. 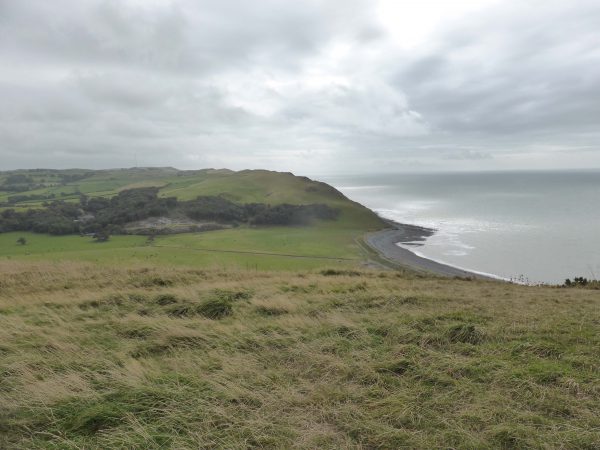 Our route down is a gradually descending path that eventually leads through a relatively new housing estate, across a road and around a park before going downhill to cross the River Rhiedol. The river path passes a Morrison’s Supermarket before threading its way back into town through an attractive riverside wildlife corridor. This is the same river we walked besides in ankle deep mud yesterday at Devil’s Bridge, today we have a nice firm path.

Just past the Co-Op supermarket we make use of the public conveniences. Not something that I would usually mention, but on this occasion it was a visit of note. These are award-winning loos they are spotless and decorated with fresh flowers.

Now back at the seafront it is cracking despite the stiff breeze. Just a few months ago, in January 2014, this area was hit by horrendous storms. Rocks were washed up onto the road and the properties adjoining the promenade were evacuated for five days. It is difficult to believe looking at it now.

We get back to the car just in time for the football results. I have been trying to keep an eye on Saints progress whilst walking and now hear that they have won 3-1 away to West Ham. Apparently it is twelve years since Saints last won at Upton Park, I was there on that occasion. Then in comes the news that Pompey has lost at home (sorry Roger, but this always brings a smile to my face). Now I am only waiting for one score to make me believe that there really are football gods. Sure enough in it comes, Bristol Rovers have won at home to top of the table Halifax Town. I have no particular affection for the Pirates, but their manager Darrell Clarke is a very good friend. Three perfect results, there really is a football god!

After having my prayers answered football wise it only seems appropriate to spend the evening in the company of the Reverend James (a particularly good, bottled bitter, brewed by Brains) with the Reverend Al Green’s greatest hits playing on CD. Happy days. Up the Saints! 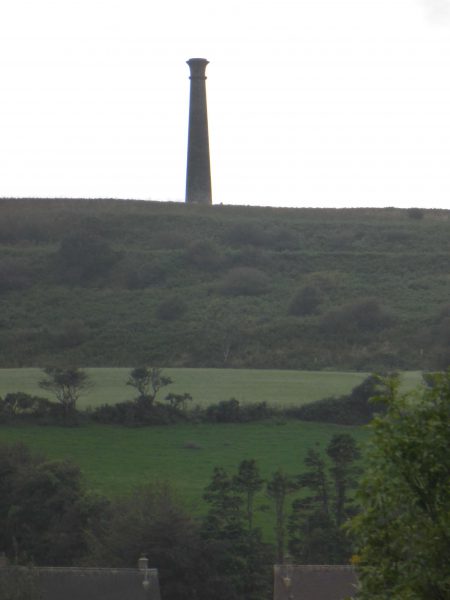