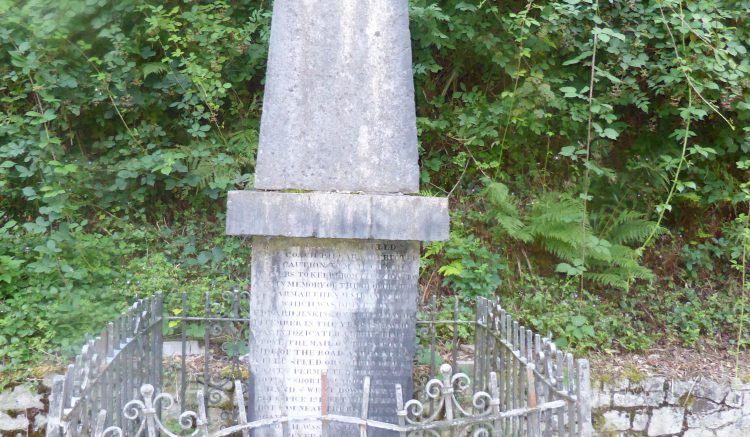 After yesterday’s experience with the steep gorges I take care to plan a walk today that presents no similar challenges. We head off to Brecon and park in the centre of town and spend a while just mooching around.

Our walk starts in the centre of the town at Wellington Square with its statue of the Duke of Wellington, from here we join the superbly named High Street Inferior, which leads to (you’ve guessed it) High Street Superior. 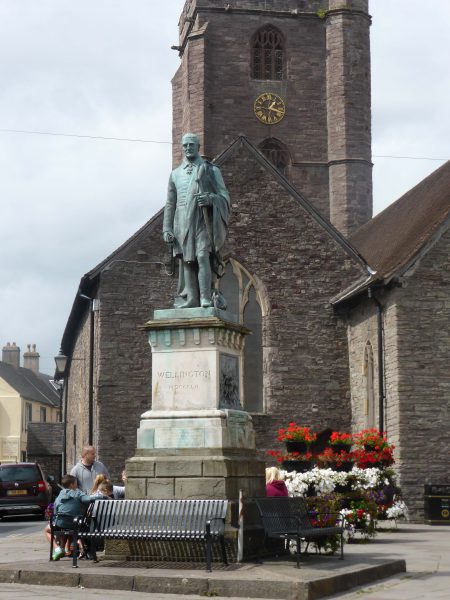 We continue along and take a footpath on the left that crosses the River Honddu and then we start to climb. I soon realise that we are high on the edge of a steep wooded gorge. Initially there is a wooden fence but this soon disappears and the path continues along high above the river. It is a cracking area to walk and we just follow the path towards Anod Bridge.

At the edge of the woodland we cross a stile and go down hill to another stile that brings us out on the lane by Anod Bridge where we turn left. Our walk is now a steady stroll along a quiet lane until we reach the B4520. Here we turn right and walk half a mile along this slightly busier road. We join the first lane on the left and walk uphill for quarter of a mile.

A left turn up a bridleway takes us up and onto Pen-y-crug. A steady climb up a grassy track takes us to the Iron Age hill fort with its ramparts still intact and then on up to the trig point (1,085 feet). Yet another spot with stunning views. We look back over Brecon and across the River Usk valley see the Brecon Beacons and to the east the distant Black Mountains. 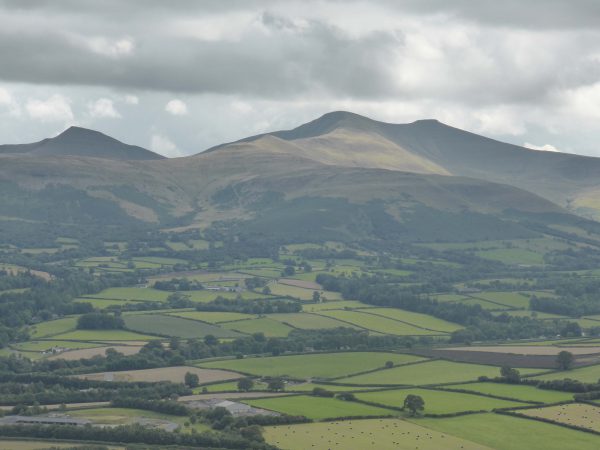 We leave the hilltop and walk down towards Brecon, our route takes us to a field and after crossing two stiles we are confronted with a field of bears and young calves. They are either side of our path, we have become cautious before entering such fields. We know that we are likely to be okay, but there is an easy alternative route so why take the risk. Back up the hill and we join the path that takes us to the bridleway leading back to Brecon.

As we enter the town we come to Brecon Cathedral. Lynnie goes in to have a look, whilst I peak around the door. Apparently not all of God’s creatures are welcome in his house here. The Cathedral’s information tells us that it started life in 1093 as the Benedictine Priory of St John the Evangelist, built by the Normans on the site of an earlier Celtic church. After the dissolution of the monasteries in 1537 it became Brecon’s Parish Church, only becoming a Cathedral in 1923 on the establishment of the Diocese of Swansea and Brecon. 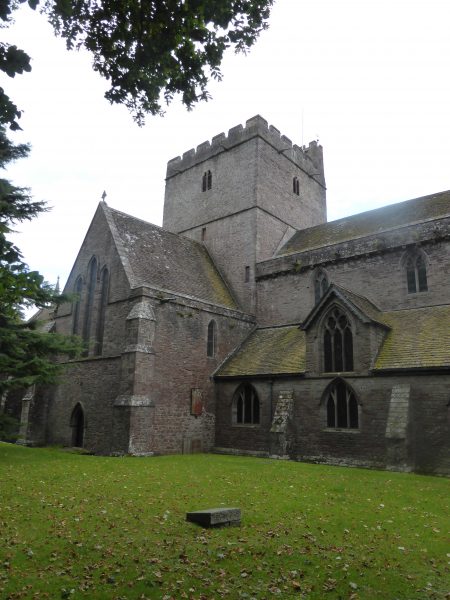 As we drive back along the Usk Valley on the A40 I stop at a lay bye with a monument in it that caught my eye earlier. This is one of those interesting places that is easy to pass, but well worth stopping to view.

The monument is called Coachman’s Pillar and has an inscription part of which reads:
“THIS PILLAR IS CALLED
MAIL COACH PILLAR AND ERECTED
AS A CAUTION TO KEEP FROM INTOXICATION
AND IN MEMORY OF THE GLOUCESTER
& CARMARTHEN MAIL COACH
WHICH WAS DRIVEN BY
EDWARD JENKINS ON THE 19 DAY OF
DECEMBER IN THE YEAR 1835, WHO
WAS INTOXICATED AT THE TIME &
DROVE THE MAIL ON THE WRONG
SIDE OF THE ROAD AND GOING AT
A FULL SPEED OR GALLOP MET A
CART & PERMITTED THE LEADER
TO TURN SHORT ROUND TO THE RIGHT
HAND & WENT DOWN OVER THE
PRECIPICE 121 FEET WHERE AT THE
BOTTOM NEAR THE RIVER IT CAME
AGAINST AN ASH TREE WHEN THE
COACH WAS DASHED INTO
SEVERAL PIECES
COLONEL GWYNN OF GLAN BRIAN
PARK, DANIEL JONES ESQ OF
PENYBONT & A PERSON OF THE
NAME OF EDWARDS WERE OUTSIDE
& DAVID LLOYD HARRIS ESQ OF
LLANDOVERY SOLICITOR AND A LAD OF
THE NAME OF KERNICK WERE INSIDE
PASSENGERS BY THE MAIL AT THE
TIME AND JOHN COMPTON OUTSIDE”

There is more but not easy to read.

Whilst Lynnie prepares dinner I pop down to the Goose and Cuckoo to make use of their wi-fi. I am greeted like a local, Luke really does do a good job making everyone feel welcome. It is a cracking pub and I will miss it when we move on tomorrow.