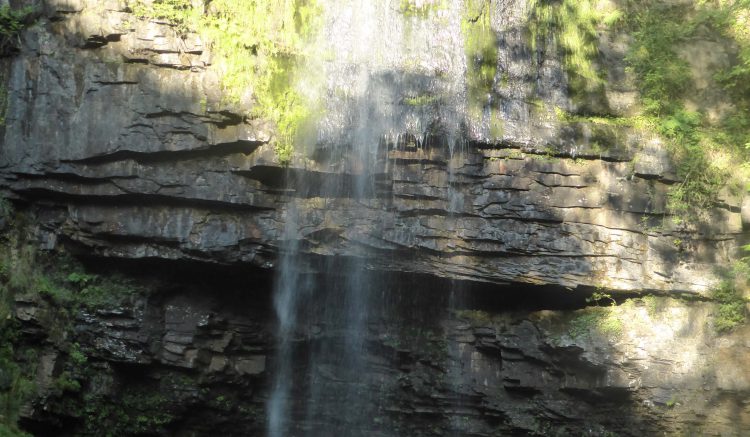 Our walk today is on the other side of the Black Mountain, we head off in the car and near the top stop at a viewpoint to take some pictures. This is the moment when Lynnie realises she has forgotten her walking shoes. So we drive back to the Unicorn. 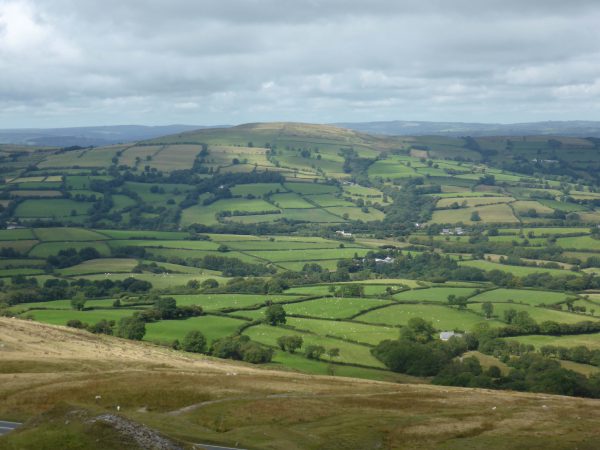 Off we go again, over the Black Mountain after rethinking our plans. The walk we were planning was estimated at six hours it could now be tight to complete it before dark. Our destination now is the Country Park at Craig-y-nos a few miles north of Abercrave on the A4067.

We start our walk by Craig-y-nos Castle. The Castle was built in 1843 by Captain Rice Davies Powell, in 1876 a chap called Morgan Morgan purchased it and then in 1878 the internationally renowned opera singer Adelina Patti purchased the castle and park land. Patti had a purpose built theatre built as a miniature version of La Scala in Milan. 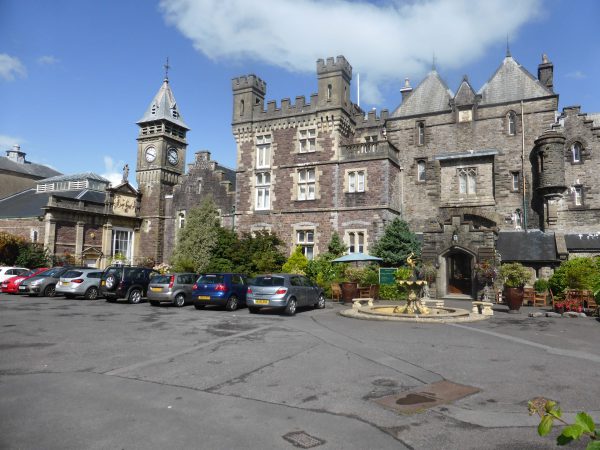 Apparently Patti was known to be tempestuous and with her fame and wealth she demanded that at the nearby railway station she had her own private waiting room and own railway carriage. She had many distinguished visitors including the Prince of Wales, later to become Edward VII.

After Patti’s death in 1919 the Castle became a TB hospital and today is run as a hotel, conference centre and wedding venue, the theatre is used for wedding ceremonies. The grounds are run as a country park by the Brecon Beacons National Park authority.

We walk past the castle and take a footpath on the right that leads us up and over Crag-y-nos quarry. There are warning signs about steep drops, but the foliage is thick and we can’t see far beyond the edge of the path. (Later I discover that this is a blessing.) Our route is clear until we reach the access land at the top, here the guide book tells us to head through gates that no longer exist, but after a while we find our route to the trig point at the top of Cribarth (1,390 feet). 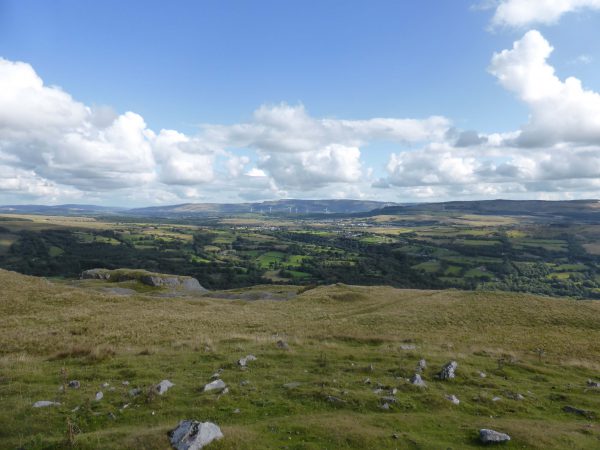 There are panoramic views from the summit. We can see down the Swansea valley the site of much past industrial activity and behind us the wilderness that is the Black Mountain. Once more we wonder at the absence of others, this is a cracking spot but there is not a soul about. If you could drive your car here it would be packed, but because it involves a bit of effort few bother. I suppose we should be grateful that we have it all to ourselves.

Around the top there are a number of old quarries and whilst descending we see the path of the old quarry tram road. Our route is straight forward as we head down to Abercrave Farm, then into Abercrave village with the attractive looking Abercrave Inn. Here we turn left along the side of a road and then almost immediately take another minor road on the right that takes us steeply downhill and over a bridge. We turn left on a footpath through a series of kissing gates and then turn left in woodland to walk up across a field to join a road.

At a fork in the road we take the left option and after crossing Llech Bridge we take a footpath on our right into woodland alongside the River Llech.

This is an attractive gorge that we gradually climb, there is a steep drop to our right. We ignore options to cross the river and those leading away from the gorge and continue upwards. It is an undulating path, with wet stones the last time we were somewhere similar, the North York Moors, Lynnie took a fall. So we go cautiously, a slip here might mean going over the edge!

At times we cannot see the river, but can hear the constant trickle of water over rocks far below us. The path takes us down to a walkway around the edge of the river, today it is not much more than a trickle, but this would be a hazardous spot with the river in spate. 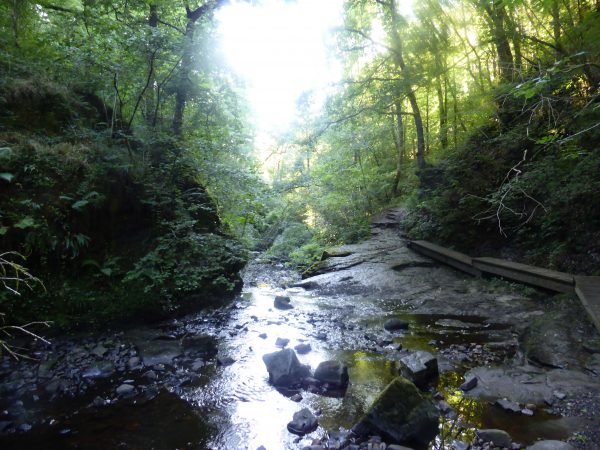 From here we climb again coming to a steep section where we encounter a gate. Here the drop is obvious and starting to spook me, we round the corner and it is worse. I am stuck where I don’t want to go forward or back. But clearly it is not an option to stay here so gingerly I move forward.

After a few minutes I am away from the edge and feeling more comfortable. At a junction of paths our route is to the left, but we detour to the right, across a wooden bridge and up steep wooden steps, with suitable handrails, then a walkway leading to a path that arrives at the foot of Henrhyd Falls.

Henrhyd Falls are the highest waterfall in the Brecon Beacons National Park at 90 feet. Apparently when the river is in spate, the spray from the fall travels over 300 feet down the valley. Today there is a steady flow of water, enough to make it an impressive sight but not enough to get us wet.

We retrace our steps along the walkway and over the bridge to take the uphill footpath to a car park. Here we join a lane and turn left to walk along the road for a few miles until we reach Pont-rhyd-arw.

Here just before the bridge we turn right along a bridleway and follow this before taking a left fork to walk along a tarmac drive that leads to a farm. We take a footpath to the left through a gate and into woodland above the River Tawe. We arrive by the river and turn left, walking through the country park.

It has been a good stroll, somewhere close to ten miles and we have avoided rain. A cracking day out.