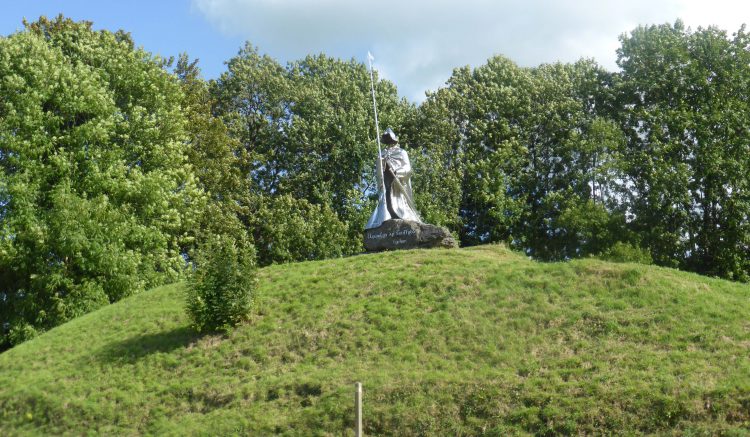 The European Athletics have finally finished and Lynnie emerges from the Unicorn! She is ready for a walk, not a long one and or one that involves steep hills. So a walk along the banks of a river seems to fit the bill.

We park in the centre of Llandovery in the shadow of the remains of the castle. We walk through the Market Square and then turn along Stone Street with its collection of small shops and pubs. We cross the A483 to join the B4344.

After a couple of hundred yards we reach a footpath on our right our plan is to join this and follow it over a couple of fields. The stile is high and the only means of getting the boys over is to lift them. I see can a similar stile on the far side of the field, a glance at the map shows there could be about six stiles on this loop. I am not sure my back will cope with lifting the boys over so many. They are both lean but still weigh almost 25 kilos.

As we walk along the road a car draws up alongside us. The chap asks if we know where we are heading and offers to drive us up into the moorland so that we can walk back to our car. It is a genuine offer, but my mum always warned me of the perils of ‘stranger danger’ so we decline.

After a mile on the road we come to a lane on our left leading to an old bridge. We turn here and just before the bridge encounter another difficult stile. This time I bite the bullet and the boys are lifted over. Walking alongside the River Towy is pleasant, at the edge of the field we encounter a kissing gate and I grab the opportunity.

We then come to the A40 and cross it, there awaiting us is the highest and most difficult stile we have encountered for a long time. It is a struggle, but the boys are now skilled at the procedure and we manage it with difficulty. 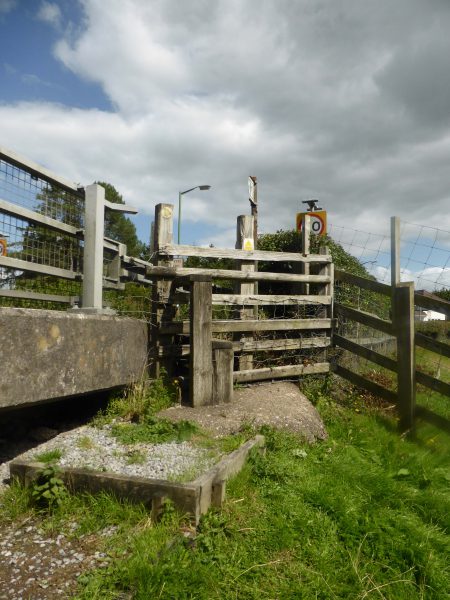 We continue our stroll beside the River Towy passing alongside the sports ground and then a small golf course (not one I would want to play, nor apparently many others).

We refer to the walking book and follow the route from the golf course, under the railway bridge and after another difficult stile follow one of the paths that looks well walked, but suddenly stops. There are thick brambles and no sign of the next stile that should be there to take us into a field. I look at it from various angles but still cannot find the route, so we turn around and retrace our steps to the sports field and then a walk back into Llandovery by road. 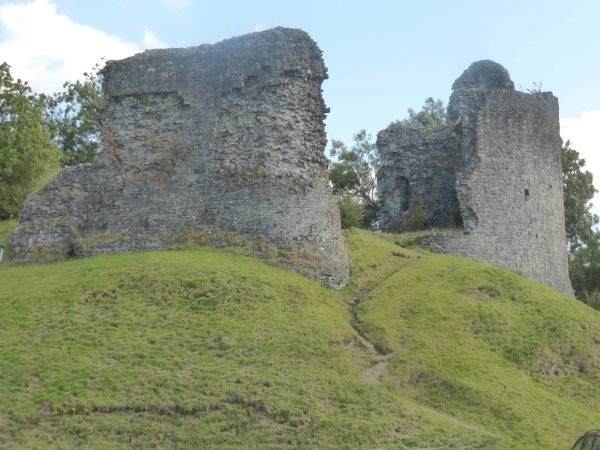 We mooch around the town with its many interesting old buildings. Then take a look at the Castle remains. Apparently the Castle was built in 1116 and was almost immediately attacked by the Welsh led by Rhys ap Gruffydd and from 1162 the Welsh held it until 1277 when the English regained it and it was granted to John Gifford and it remained in his family until being abandoned in 1490.

The Castle was used by Henry IV for a sortie into Wales to deal with Owain Glyndwr’s War of Liberation (1400-1416) this had disastrous consequences for Glyndwr’s mate Llywelyn ap Gruffydd Fychan. A 16 foot high stainless steel statue of Llywelyn stands at the foot of the castle. He took the army of King Henry IV on a ‘wild goose chase’ pretending to lead them to a secret rebel camp with the aim of them being ambushed by Glyndwr’s men. Henry sussed out this cunning plan and had Llywelyn hung drawn and quartered in the market square of Llandovery. It just goes to show the things friends will do for you.

It brings to mind those classic lines written by Carole King;

“When you’re down and troubled, And you need a helping hand ……… All you have to do is call and I’ll be there, You’ve got a friend”

I am not sure if Llewlyn knew the consequences of his actions in support of his friend, but he does have a nice shiny statue placed in his honour for people to admire.