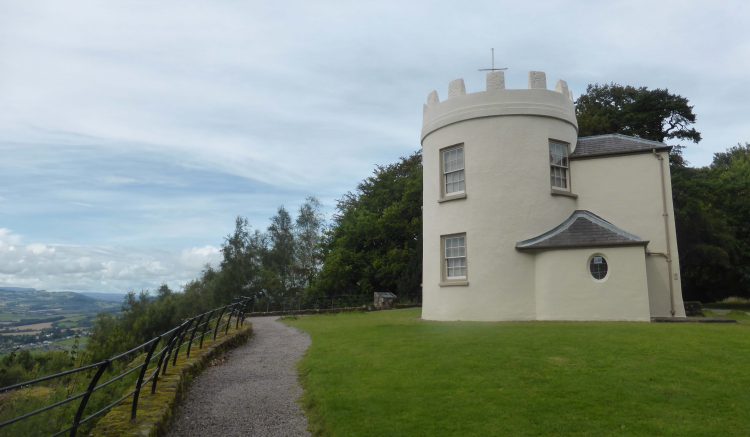 Another day of sunny spells interspersed with heavy rain showers is forecast. We have been told that a must visit place is the Kymin. It is only a short drive from where we are staying.

The Kymin is a hill of about 800 feet overlooking the town of Monmouth. It has two interesting buildings at the summit, the Roundhouse and the Naval Temple.

The Roundhouse is a two storey, Georgian white round tower. It was constructed in 1794, financed by a group of Monmouth’s gentlemen, the Monmouth Picnic Club or Kymin Club, led by Philip Meakins Hardwick. The local landowner, the Duke of Beaufort, and eight Members of Parliament headed the subscription list. The members of the Kymin Club were drawn from “the principal Gentlemen of Monmouth and its vicinity”, and met each week “for the purpose of dining together, and spending the day in a social and friendly manner”. Apparently they wanted a venue for their regular meetings, dining and events. So the Kymin is equipped with kitchens on the ground floor and a banqueting room above, with powerful telescopes fitted on the roof to fully take in the views. 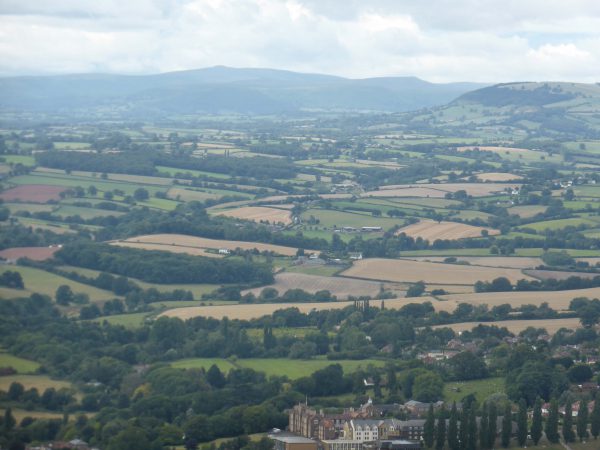 We take in the view from the ground but the weather today means that we can see very little, it is still a special spot and well worth visiting again on a clear day.

Apparently others could hire the house, for a fee. It was claimed that nine counties could be viewed from the roof (Gloucestershire, Monmouthshire, Glamorganshire, Breconshire, Worcestershire, Herefordshire, Radnorshire, Shropshire and Somerset).

On the side of the hill alongside and below the banqueting house a wooded area ‘Beaulieu Grove’ was laid out and proved a popular place, it had a series of walks provided with seats from which to contemplate the views. Today it is all a bit overgrown and the views have long since gone from the woods but it is a special place and feels a bit like an enchanted wood. The boys love it. 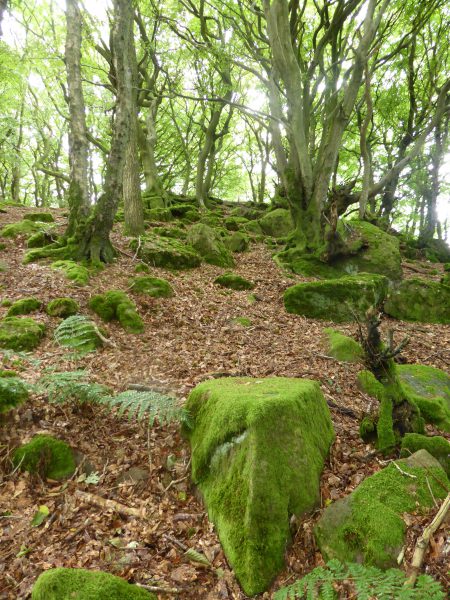 The Naval Temple was built in honour of sixteen admirals and has a plaque with the inscription “This Naval Temple was erected August 1st, 1800 to perpetuate the names of those noble admirals who distinguished themselves by their glorious victories for England in the last and present wars and respectfully dedicated to her grace the Dutchess of Beaufort daughter of Admiral Boscawan”. 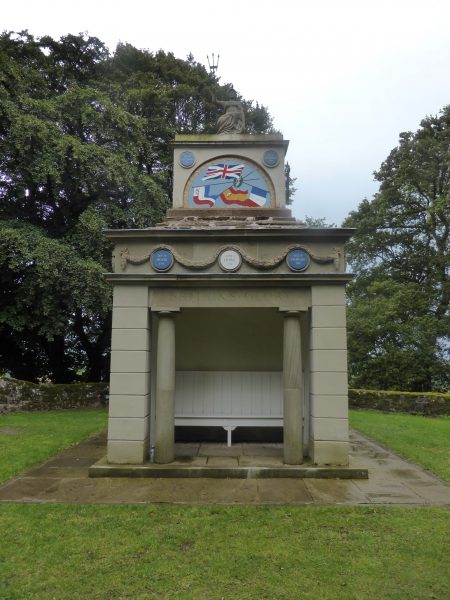 The Kymin Club constructed the temple in 1800 to commemorate the second anniversary of the British naval victory at the Battle of the Nile in 1798 and in recognition of sixteen of the British Royal Navy Admirals who had delivered significant victories in other major sea battles to that date.

This is an interesting spot and one of those that unless you are a local you would not automatically know about.

After an hour or so we head off for our walk, we could have walked from the Kymin but Lynnie was put off by the steep hill so I log that jaunt for another time.

We park at the Forestry Commission car park just off the B4234 close to Mystock Bridge. From here we walk into the woods. One of my favourite books is Bill Bryson’s “A Walk in the Woods” it tells the story of his walk on the Appalachian Trail. The bit about how to deal with a bear attack still makes me laugh out loud and Lynnie says that the bit about him buying all the equipment that he could possibly need and then discarding half of it before setting off is just like me.

We are unlikely to encounter bears in the Forest of Dean. However, potentially dangerous wild animals do lurk in these woods. A couple of months ago I read about the dangers of Wild Boar attacks. It is estimated that 800 live in the Forest and there are calls for this number to be halved through a cull because of the frequency of attacks on dogs and horses. Boars were common in the Forest until the 13th century when they became extinct. In the 1970’s it became popular to farm them and it is thought some escaped, or were released, and from these the population has grown.

Our route takes us along one of the many old railway tracks in this area. This was once a heavy industrial area with mines and quarries dotted throughout the Forest. It is pleasant walking and the boys enjoy the running about (all the while I am keeping an eye out for the boars).

We turn towards the main A4136 and join it just outside of the village of Brierley, just before reaching the Swan Inn we turn left on the road, sign posted to “The Plubbs”. After about 500 yards we reach a bridge over Greathough Brook and just before a sharp bend we turn right to walk into the woods.

We follow the track for a while and where it forks take the left option to go along a path that climbs above the brook. This is an attractive spot and eventually emerges onto a lane by a sharp bend. We follow the lane up hill, across the valley is the former mining village of Ruardean Woodside. At the end of the lane we climb a stile directly in front of us into a field.

As we walk downhill we see slag heaps from the mines, they are grassing over and it makes us realise that the signs of the industrial past will soon become less obvious. 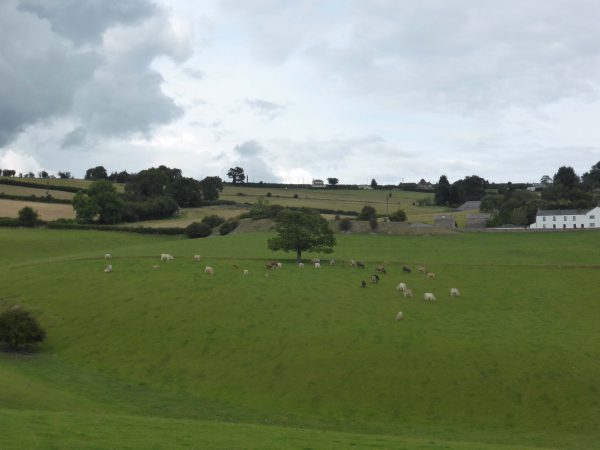 We encounter a high stile with no way through for the dogs. So I have to lift them over. I am unsure why in areas becoming increasingly dependent on tourism and walkers a more friendly approach to dogs crossing fields is not adopted.

We follow the path until we emerge on the edge of Ruardean. We are met with a heavy shower and the low cloud means that we cannot appreciate the view. We turn left to join a footpath starting between trees and then crossing fields to reach Eddy’s Lane. Here we join the road and turn left.

It is raining hard and there are claps of thunder. The viewpoint here must be stunning on a clear day, our walking book says that there are views across the Wye Valley and to the Black Mountains. Today visibility is poor, so after waiting under a tree for the worst of the storm to pass, we continue along a track on the right.

When we join a road we continue on the ridge and then walk into the woods, there are numerous paths here and we choose the wrong one. We spend a while heading in the wrong direction and then retracing our steps. Our guidebook says to emerge by the Mason’s Arms. The only problem is the pub is long closed and any signs of its existence have disappeared. Eventually we find a home that looks like it was once a pub and rejoin our guided walk.

Through woods and by a disused quarry we eventually reach the A4136 and turn right to walk beside the road for a few hundred yards before crossing back into the wood where we started our walk. It transpires that we are too eager to get off the busy road and have entered the woods too early. However, we are rewarded by the sight of an old quarry pit filled with water and covered in water lilies. From here we easily navigate our way back to the car. 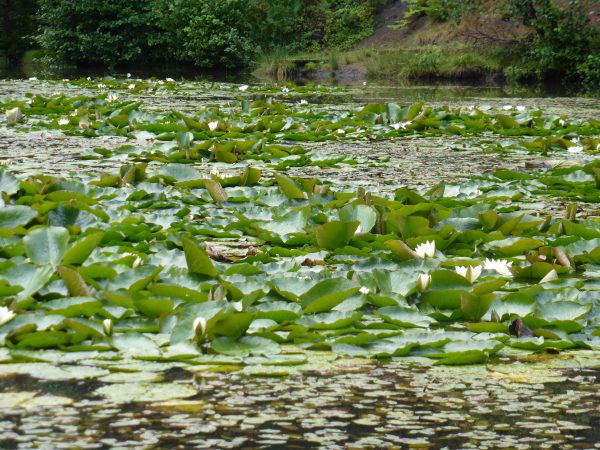 It has been a cracking walk almost ten miles in some interesting countryside. The weather has prevented us enjoying the stunning views, but it has still been a fine gallop.