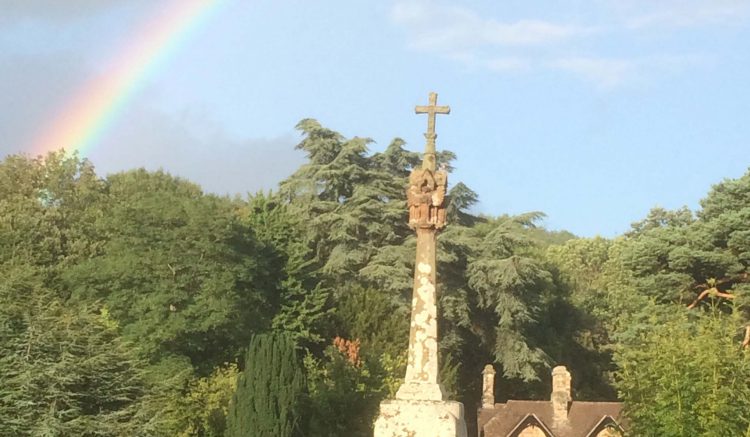 The weather is a bit iffy early on so I use the opportunity to catch up with a bit of work and then we pop into Coleford. This is a town in need of some investment, it has a feel of a place that has seen better times and does not know when, or if they will return.

The last time we were here we went to a local potter – Reckless Pottery- and purchased some of his work. It is lovely stuff, but we have vowed not to pack the Unicorn with purchases so we resist the temptation to visit again.

Coleford was initially a small hamlet, much smaller than nearby Newland, but it was ideally located as industry grew in the area. Here there was the production of charcoal, the mining of iron ore and coal, plus the quarrying of limestone to provide local employment. The town rapidly grew and became the hub for this part of the Forest of Dean.

It is said that the town is popular with tourists but there is little evidence of it today. The main employment in the area appears to be the factory, which used to be owned by Beechams and then GlaxoSmithKline and is today, apparently, the sole production facility for Ribena and Lucozade.

Lynnie settles to watch athletics on TV, this is the first time it has been out of the box for months and it is only being used now because Lynnie is so keen on Championship athletics. I am minded to do away with the TV all together when we return to a house.

I set off for a mooch about from the site. I take a right turn to walk down the lane and after a couple of hundred yards take the track on the right that leads to Newland. This is the Burial Path, so called because it was the route that those that had passed away in Coleford travelled, centuries ago, to be buried at the church in Newland. It is now a sunny evening and a pleasant walk. Back in Pitton I regularly walk home from the Hook and Glove through the woods in the dark without any bother. However, the walk between Newland and the site is not one that I would undertake once the light had started to fade. It is very uneven underfoot and all a bit spooky.

In Newland I take another look at the church and almshouses opposite. Lynnie and I explored here a couple of days ago. The church of All Saints is known as the Cathedral of the Forest and was originally the focal point of a dispersed parish.

Newland was the home of the Newland Oak, it is claimed that this tree had the largest circumference of any Common Oak. Measurements taken by the Royal Scottish Arboricultural Society in 1898 recorded that the tree had a girth of 46ft 4ins at a foot above the ground. The tree suffered a near fatal collapse following a snowstorm in 1955 and was finished off by vandals that set fire to it in 1970.

I then walk out of the village on the road towards Clearwell and after mile or so take a left turn towards Whitecliff, at the next junction I turn left again and complete the loop back to the caravan.

It has been a pleasant evening stroll, which the boys have enjoyed. Though I have walked on roads for most of the route I have seen no more than half a dozen cars.