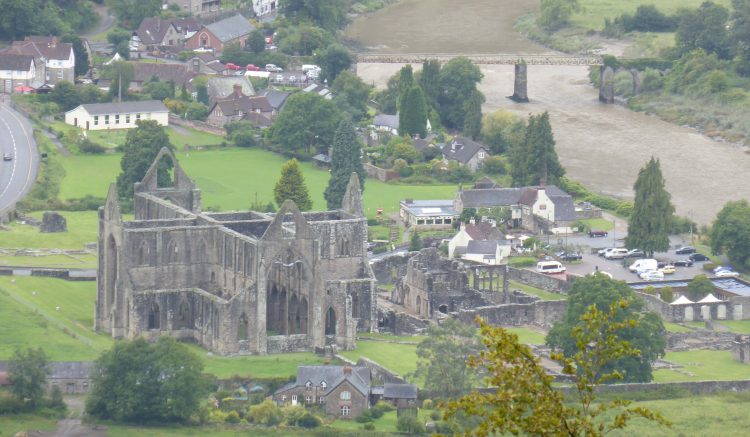 It is a few years since we last came to the Wye Valley and the Forest of Dean. Then we stayed in a friendly bed and breakfast just outside Whitchurch and close by was a motorhome dealer. We spent an hour one afternoon looking at the motorhomes and Lynnie was very clear that she would not entertain the idea of travelling around in one. As mentioned previously she took a similar stance when I first mentioned buying a caravan. Today sees our 141st consecutive day in the Unicorn!

After pitching up yesterday we went for a wander from the site and walked down the track to Newland with its magnificent church and popped into the local pub the Ostrich for a welcome pint of Wye Valley ale.

For our walk today we drive to Tintern and park alongside the A466 in one of the lay-byes just past the Moon and Sixpence pub. Apparently this pub used to be called the Mason’s Arms, but changed its name in 1948 following a visit by Somerset Maugham, author of the 1919 novel of the same name. I wonder in years to come if the country will be dotted with pubs called “Two Dogs and an Awning”, but doubt my literary skills will justify such an accolade!

We leave the road and walk by the Abbey Mill with its visitor centre and cross the fast flowing River Wye on the footbridge. We follow the path that sweeps around to the right and follow the old track bed of the Wye Valley Railway, this carries along above the River Wye with some steep drops to our right. We follow the railway path for near on two miles and then follow a track up hill, at a sharp bend we leave the track to join a footpath that take us steeply up to the Offa’s Dyke Path. On reaching the path we turn left.

Offa’s Dyke is a large earthwork that roughly follows the current border between England and Wales. The structure is named after Offa, the 8th century King of Mercia who is believed to have ordered its construction.

The Dyke, which was up to 65 feet wide and 8 feet high, is approximately 150 miles long. The Offa’s Dyke Path is 176 miles long and follows much of the Dyke route and runs from Sedbury near Chepstow to Prestatyn on the North Wales coast.
Our route takes us high above the River Wye with the odd glimpse of Tintern Abbey below. After a while we reach Devil’s Pulpit. This is a limestone rock jutting out from the cliff. Legend has it that the Devil used the rock to preach to the monks in the Abbey below tempting them to desert their order. 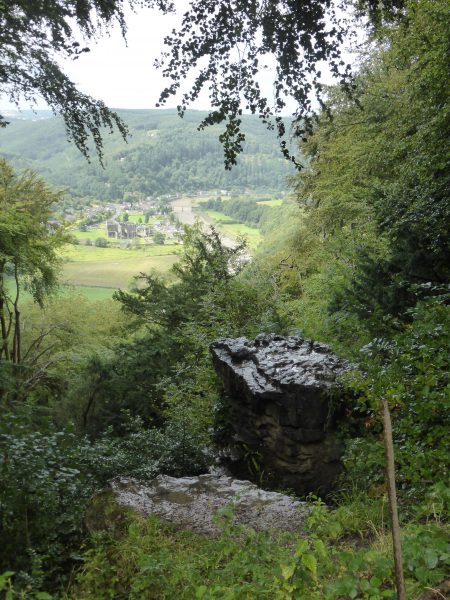 Tintern Abbey was founded by Walter de Clare in 1131 alongside the river Wye. It was the second Cistercian foundation in Britain and the monks came from the house of Citeaux in France.
Between 1270 and 1301 the Abbey was rebuilt and when it was completed it housed around four hundred monks. The Abbey’s land was divided into agricultural units and local people provided farm labour and served the Abbey. For 400 years, it dominated the economy of the surrounding area. The Abbey remained in operation until the Dissolution of the Monasteries in 1536. 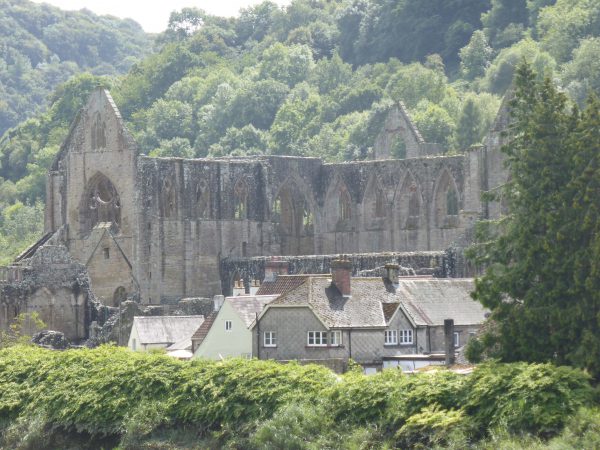 It is an easy path to follow, well marked, it takes us further along the ridge and then descends across fields to Brockweir. This is an interesting village. Today it is very quiet bathing in sunshine and looks a relaxing spot to live alongside the river. For centuries this village had a thriving shipbuilding industry and was the highest point on the River Wye reachable by normal sea going ships. The quay was where sea going ships were loaded and unloaded and goods transferred from and to barges that went further up the river. 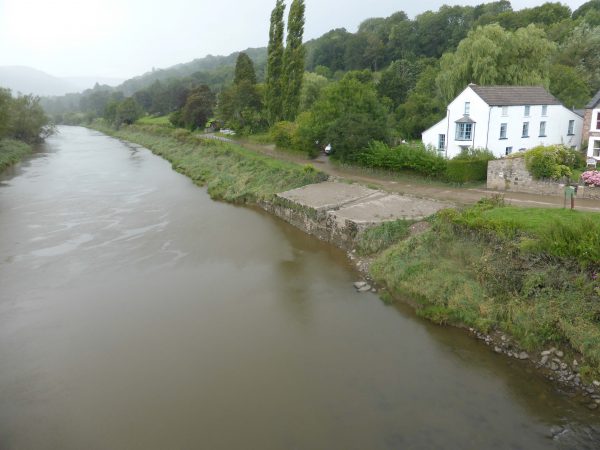 The village was said to be one of the most lawless places in the 19th century. Then there were sixteen public houses in the village catering for the stevedores employed at the quayside.
We cross the River Wye and immediately turn left to pick up the old railway line to walk past the station that is now a busy café. We pass large woodcarvings of King Offa, Sabrina or Hafren, King Arthur, King Tewdrig, Geoffrey of Monmouth and Eleanor of Provence.

The information board explains that Offa ruled the Midland kingdom of Mercia from 757 – 799, extending his influence to cover all England south of the Humber. It was as a result of a welsh invasion in 787 that he ordered the dyke to be built to defend his territory.

According to legend a king of England fell in love with Elfridis who gave birth to a beautiful daughter, Sabrina or in welsh Hafren. The king’s jealous queen killed him in battle and ordered Hafren and her mother to be thrown into the river. Hafren then became a goddess of healing and gave her name to the River Severn. 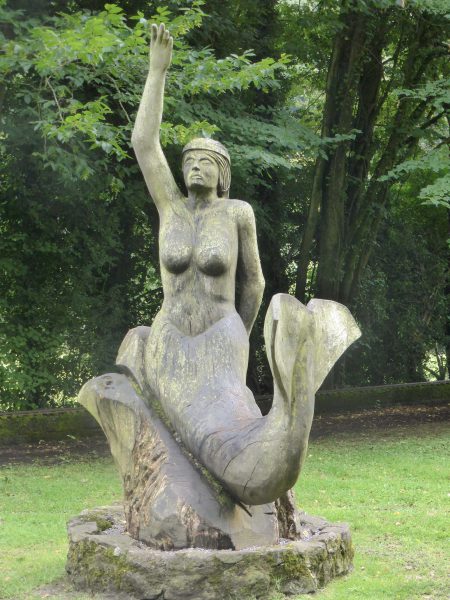 King Tewdrig was a 6th century King of Gwent. He handed his kingdom over to his son Meurig and retired to live as a hermit at Tintern. When the Saxons invaded, Meurig begged him to return and lead the army. Tewdrig defeated the Saxons at Pont-y-Saeson (the bridge of the Saxons) but was mortally wounded. At Mathern on his journey to his chosen burial ground at Flatholm, (longtime readers of this blog will recall my mention of Flatholm when we were in Somerset in May) a miraculous fountain sprang up to refresh him, but it was not enough to save him and Tewdrig lies buried in Mathern Church.

Geoffrey of Monmouth was a historian born at Monmouth Castle about 1100. He later moved to Oxford and in 1156 became Bishop of St. Asaph. His greatest achievement was to write the “History of the Kings of Britain. His glorification of King Arthur created the powerful legend that continues to this day.

Eleanor of Provence was Henry III’s queen and mother of Edward I. Apparently she was a strong character resented by the English Barons for her promotion at court of her own kinsfolk. It is said that her influence can be seen at Grosmount Castle in North Monmouthshire where she brought over French architects to build a beautiful set of apartments.
The final stretch of our walk takes us alongside the River and through the village back to the car. Our walking book says that we have covered 7 miles, it has been a nice little wander with some cracking views and interesting places along the way. Well worth the outing.