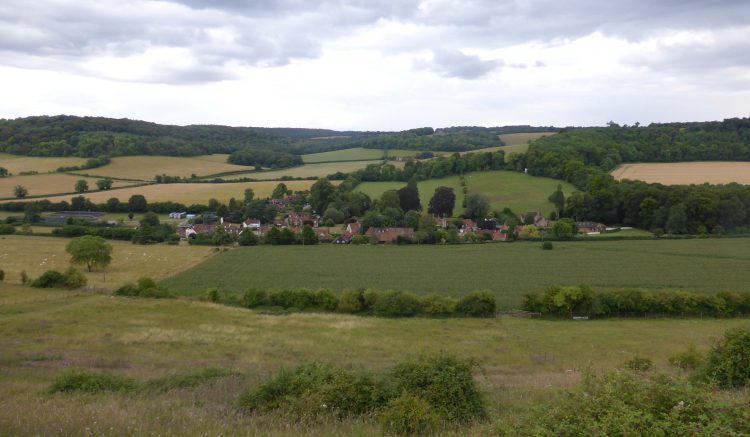 Today our afternoon walk is a jaunt from the Cholsey Grange site. We head up the farm drive and at the top turn left, along the road through part of Ibstone towards Fingest. Just past the school we turn right to walk down hill and after the sharp bend take the footpath on the left. This is the opposite direction to the route I walked on my return from Turville on Friday.

We follow the path to Turville Down and walk across towards Cobstone Mill. The downs are abundant with wildflowers and butterflies. It really is a wonderful spot with its views down onto the village of Turville.

At the mill we cross the road and join the footpath directly opposite the mill gates. We follow this path down hill through beech trees and at the bottom take the footpath on the left that leads us through the bottom of the valley on an attractive wooded path. After a couple of miles we take the turn back up to Cholsey Grange.

Ibstone is an interesting village. Apparently the name is derived from the Anglo Saxon and means Hibba’s boundary stone, referring to the boundary with Oxfordshire. It is also reported that at the time of King Edward the Confessor the village was known as Hibestanes and was in the possession of Tovi the Proud who was the King’s thegn.

A thegn is described as a retainer to the King in Anglo Saxon England or a royal official or constable. Either way Tovi the Proud was good at his job and the Dane became rich and powerful acquiring considerable wealth and land across the south of England.

Another ex resident of the village was Barbara Castle the Labour Party politician who held many ministerial posts including Minister of Transport. During her spell in that position (December 1965 to April 1968) she introduced the breathalyser, made the 70mph speed limit permanent and introduced legislation making it compulsory to fit seat belts to all new cars. Along with all this she still found time to preside over the closure of 2050 miles of railway. It was only last week that we were walking on the Monsal Trail, which is along the route of one of the lines closed by her.

Our walk around this loop takes us just over an hour and a half and was somewhere between five and six miles. We get back in time to fire up the BBQ as we are entertaining Lolly and Toby this evening.