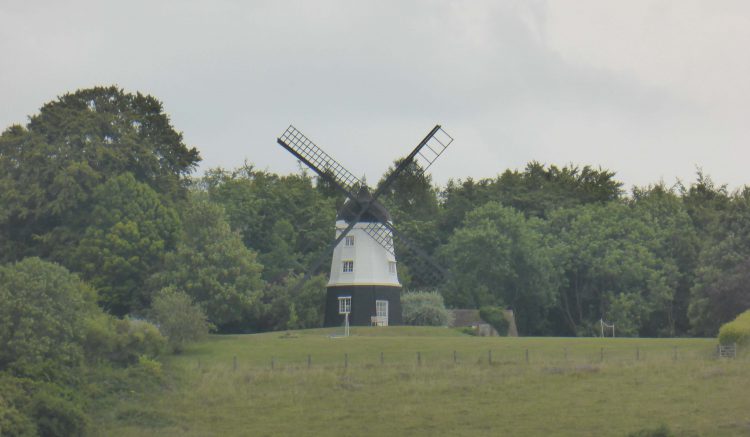 Yesterday morning whilst packing to leave the Peak District we were listening to Chris Evans’ Breakfast Show. We are both fans of this radio programme and Lynnie will not get out of bed before I have switched it on and put the kettle on to boil.

Anyway, Chris asked the question, “What three films would you want to watch over and over again?” There is no doubt for me that if I had to choose one it would be Mary Poppins, a heart-rending tale of parenthood and I have yet to get by the bit where the wind changes without crying (you may think I am joking but just ask Lynnie or Lolly!), another favourite is Brassed Off again there is a need to keep the box of tissues close by, then I struggle because there are three films that I would have difficulty to choose between, Seven Brides for Seven Brothers, Calamity Jane and Chitty Chitty Bang Bang. Fortunately I don’t have to make the decision, but as you can tell I am up to date with the film industry.

This might appear irrelevant to the blog, but I promise all will become clear later. After months of being away we caught up with Lolly yesterday evening when we arrived at Cholsey Grange. Early this morning (well early in Lynnie’s world, Lolly came to collect Lynnie for a day out – which includes a much needed haircut!) so I am left alone with the boys for the day.

We stayed on this site last year and I did a cracking walk, so after doing a few chores around the van and making a picnic (don’t let any one tell you that I am not the modern man) the boys and I set off.

We take the track from Cholsey Grange and skirt the cricket field, where marquees are erected for the horticultural show this weekend. Then onto Ibstone Common where I pick up the Chiltern Way, which I follow through woods and across open fields, passing through the hamlet of Northend. On reaching Hollandridge Farm I leave the Chiltern Way and turn left down Hollandridge Lane and follow this for a mile and a half with splendid views through the trees on either side. 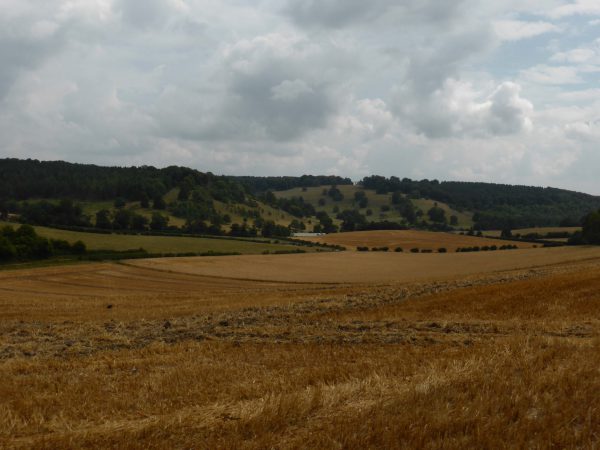 Eventually I reach the B480 and turn left to walk along the road for about 100 yards before turning right to take the footpath up to Pishillbury Wood. This is an interesting bit of woodland with quite a few fallen trees making the path a bit of an obstacle track. After nearly a mile I reach the junction with the Oxfordshire Way and follow this to the road, last year I carried on here and walked on the Way to Lodge Farm. Today I take the road on the right and walk up into the village of Maidensgrove with its large houses behind high hedges and security gates. At the top of the hill I turn left and follow the lane to Lodge Farm.

At the end of the lane I rejoin the Oxfordshire Way to walk alongside the nature reserve and at a fork in the pathway take the left option onto Warmscombe Lane and follow this down hill for a mile and reach the B480 again and turn right along the road for a couple of hundred yards.

At a footpath sign on the left I leave the road and walk across a harvested field (a first on this tour) and then enter Paradise Wood. Giving a copse a name like this raises expectations, it is a pleasant wood somewhat spoilt by slightly overgrown footpaths with brambles and nettles attacking my bare legs.

Out of the woods across a couple of fields then the footpath joins a grassy track for about a mile until reaching Coxlease Farm. On reaching the lane I turn left and follow this road alongside the edge of Stonor Park. At the junction of lanes I turn left along Drovers Lane and walk towards the hamlet of Southend. Here I rejoin the Chiltern Way by turning right to walk along a lane towards Southend Farm. The track then goes on to Turville. 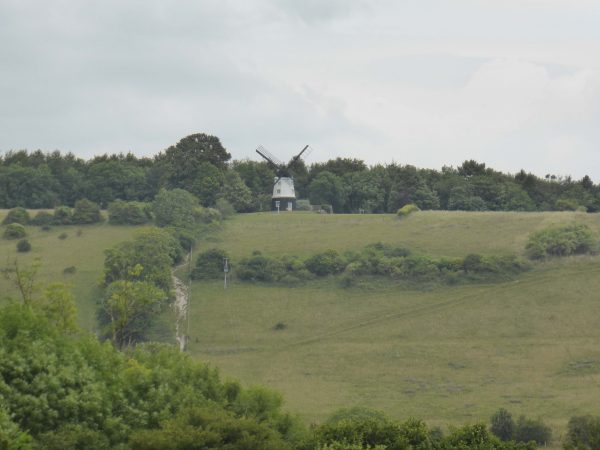 As I walk towards Turville on the hill opposite is Cobstone windmill. This was built around 1816 and was built to replace the original mill that had stood on this site since the 16th Century. It was a working mill, grinding corn until 1873. It then fell into disrepair. But this is a special windmill and it was restored in 1967 for the filming of Chitty Chitty Bang Bang. This is where Caractacus Potts (played by Dick Van Dyke) and his family lived. The film also starred Sally Ann Howes as the lovely Miss Truly Scrumptious.

The film was based on Ian Fleming’s novel Chitty-Chitty-Bang-Bang: The Magical Car and the film script was written by Roald Dahl. Those of you who have seen the film will remember that the widowed Caractacus Potts lived in the windmill with his two children and his even more eccentric father (played brilliantly by Lionel Jefferies). Caractacus was an inventor and the windmill was also home to chickens that featured in many scenes.

Last year, when staying at Cholsey Grange CL, the owner Ted told me the story of the chickens. When the film crew arrived in the area they needed some chickens and approached his mother to hire her hens for a week. A fee of £10 was agreed and off the hens went, returning ten weeks later. With the £100 Ted’s mother purchased a gold omega watch that remains in the family.

Ted also told me that as a child he recalls seeing the Zeppelin that features in the film flying around the local area. At the time he thought it was normal to see such sights.

Cobstone Mill has featured in a number of other films and TV programmes, but non as significant as Chitty Chitty Bang Bang.

My walk takes me through Turville, this is the Vicar of Dibley village and is an attractive place, but very quiet, there is not a soul about. I turn left along the road and after approximately 100 yards take the footpath between cottages that leads me across a field of sweet corn, then through a couple of kissing gates and into the woods to climb some steps. I keep on this path ignoring all other paths to the right and eventually join a lane below Ibstone Church.

Up a steep hill and then join we the road going through Ibstone village. The boys and I have been out for six and a half hours and covered just over twenty miles. Time for a well earned beer before setting up the BBQ. It’s a tough life! 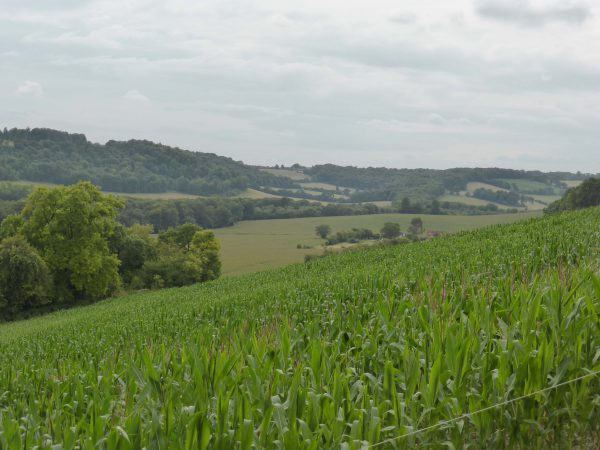