I set off on our early morning walk, but Dexter is not keen. He has a limp so we go as far as we need to for him to cock his leg and then back to the Unicorn. Crosby still needs a walk so he and I head off together.

It is unusual for me to be walking with just Crosby, Dexter had four years of my sole attention before the arrival Crosby (or as Dexter would call him that annoying puppy). When I have both dogs Crosby likes to be in front, probably so that he gets first pick of any tasty scraps (tasty being a very generic term to Crosby, some of the things that enter his mouth are frankly disgusting.)

After a short drive I park up in the village of North Repps and walk towards the church. Taking a footpath through the graveyard I follow a path that takes me across a couple of fields, including crossing the railway line. Stop, look, listen! All clear so across I go. Another field and we reach North Repps Aerodrome. This is a grass runway that caters for light aircraft, microlights and helicopters. Nothing flying today.

I take the footpath that skirts around Winspurs Farm and then follow the bridleway towards Hall Farm. I have been walking in shorts since we were at Bridport in April. Up until now it has been fine, but all of a sudden the nettles are growing. A couple of hundred yards of hazardous walking, and a quick look for a dock leaf or two to relieve the stings. Then across wheat fields and I have arrived at South Repps.

I head along a path that leads to St James Church, a fine building which I must show Lynnie later. Past the church and on the road until I meet the bridleway on the left that leads to Frogshall Farm House and then continuing on to the Rectory at North Repps. Here I pick up the road and walk by the church and back to the car.

Crosby has enjoyed his five mile stroll, no obvious signs of missing Lynnie and Dexter. For most of our walk I have been worrying about Dexter’s leg. Time to go back and check how he is and then drop Lynnie off at Felbrigg Hall so that she can visit the house and gardens.

Later after collecting Lynnie we decide to enjoy a short evening drive and a pint. First stop is South Repps church, it is as fine a building inside as it is out. We then pass John of Gaunt’s House, on the way to Mundsley a brief stop to look at Stow Mill windmill (it is closed), before stopping at the Gunton Arms for a very enjoyable pint of Woodfordes Wherry. 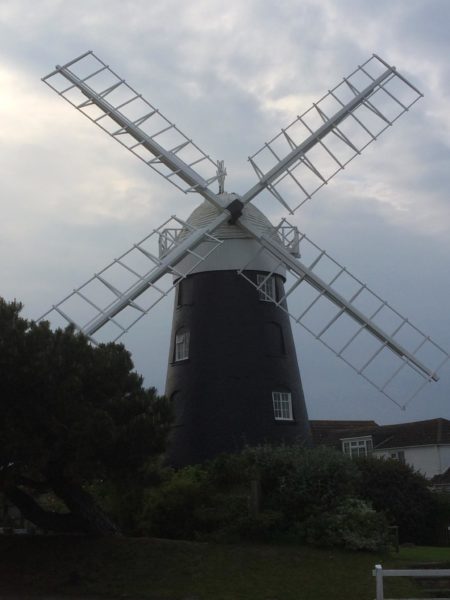 The Gunton Arms is interesting. It has the feel of an old pub. The building is old but the pub has only been open a couple of years and is tastefully done. One of the dining areas is a hall where meals are being cooked over an open fire. Tempted as we are to sample the menu we decide to head back to the Unicorn for supper.

Dexter has enjoyed his day of rest, still limping but not so bad. Another days rest and hopefully he will be back to full working order.